A Spanish Miquelet Lock Sporting Gun by Antonio Guisasola Made in the Royal 'Factory' at Placencia, dated 1788 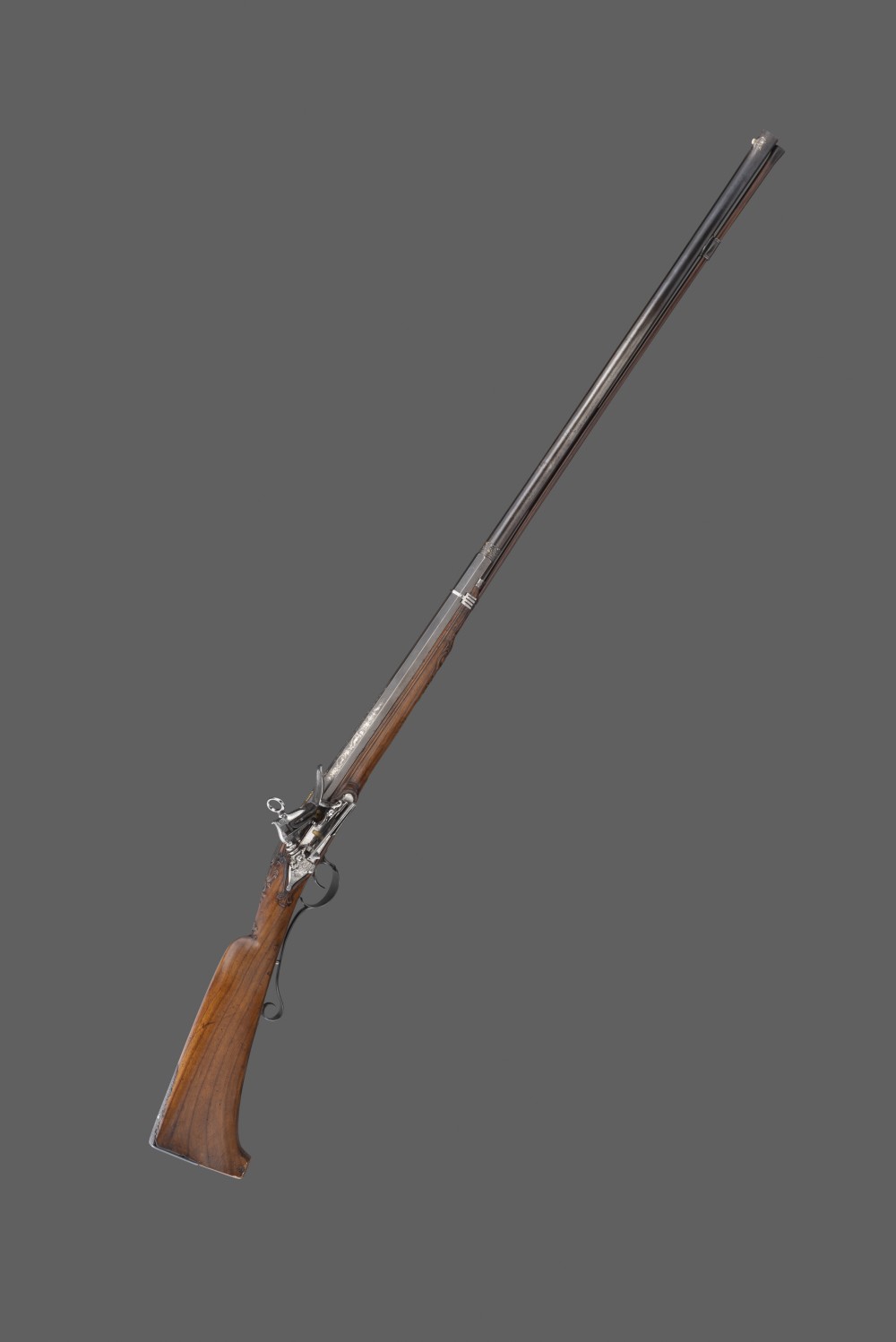 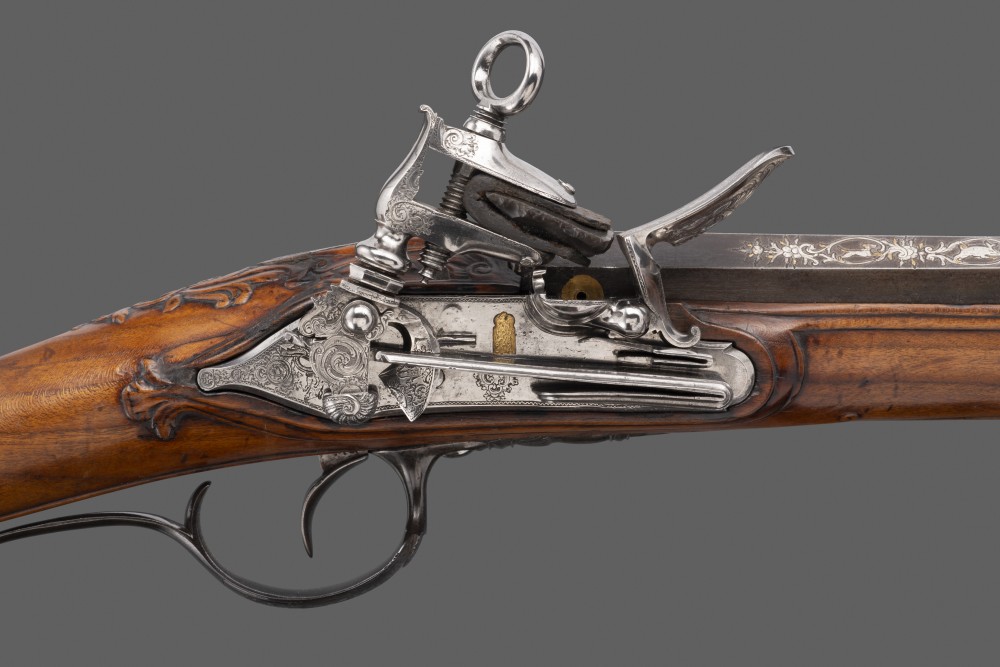 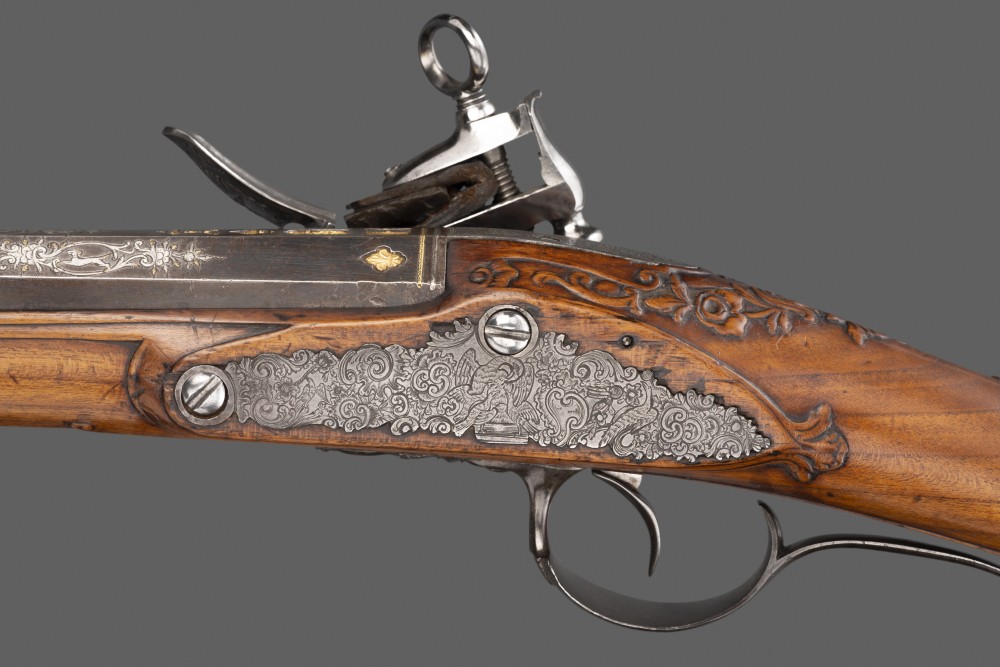 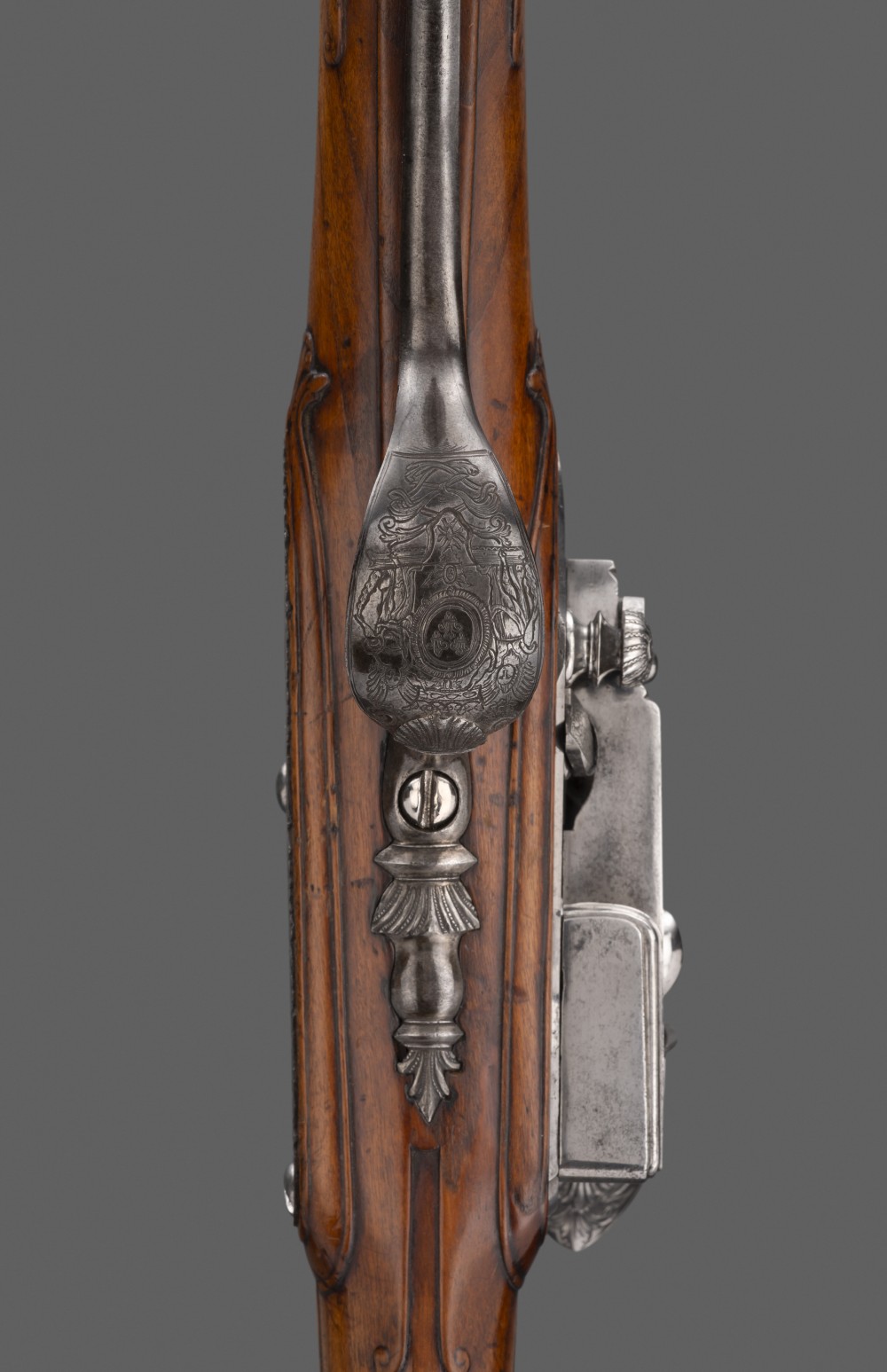 This is a fine example of a Spanish sporting gun made in traditional style with the exaggerated ‘boot-shaped’ butt that was fashionable in eighteenth-century Spain.  It was made in 1788 by the Eibar gun-maker Antonio Guisasola. The same mark as appears on the barrel of our gun, with the closed crown and his name, also appears on the barrel of a superb silver-mounted gun he made in 1796 in conjunction with Juan Navarro for presentation to King Carlos IV of Spain (1748–1819, reigned 1788–1808) that is now in the Metropolitan Museum of Art, New York (acc. no.  16.135).

The stamping on the underside of the barrel of our gun shows that it was made in the royal ‘factory’ at Placencia, a village near Guisasola’s home town in the northern Spanish province of Guipúscoa which had been involved in arms manufacture since the fourteenth century. As it is known that Guisasola himself was Master Inspector there from 1790 to 1833 it suggests strongly that our gun was made as  part  of  the  official  business  of  the factory for some royal purpose. However, it appears that at this time the ‘factory’ operation at Placencia was not a factory in the conventional sense. When the author and politician Caspar de Jovellanos visited the area in 1791 he found that the guns were made not in one place but by craftsmen working in Placencia itself and the surrounding towns and villages of Ermua, Eibar, Elgoibar and Mondragón with the work subdivided between barrel-makers, lock-makers, stock-makers and mount-makers. For most of the time these craftsmen worked on their own private commissions, the King contracting for those guns that he required and relying on a local director to ensure delivery.

The arms on the trigger guard are certainly those of the Bourbon family, but do not accurately represent the royal arms of France. The chivalric orders referred to are both French. Although the Order of Saint Michael was the earlier, being founded in 1469, it was the Order of the Holy Spirit, founded in 1578, that became the senior order, and anyone who became a knight of it was automatically also a knight of Saint Michael.

In 1788, when this gun was made, there were appear to be no French Bourbons who were members of these orders whose arms should have been depicted in this way. Athis gun was made in Spain and as Spain had been ruled by the Bourbon family since 1700 it therefore seems likely that this gun was made for a Spanish member of the Bourbon family who was a Knight of the Holy Spirit and St Michael. In 1788 there would appear to be only three possible candidates who were of an age to receive such a gun - the three surviving sons of King Carlos III (ruled 1759–88), Carlos, Ferdinand and the Infante, Gabriel.

Of the three brothers, Gabriel was the most cultured, being renowned as a classical scholar and musician.  The image of the pelican feeding her young with her own blood that appears on the side plate speaks of the piety of the owner as this was symbolic of the sacrifice of Christ on the Cross, and this imagery is likely to have appealed to the intelligent Gabriel.

At first sight what is depicted above the arms seems to be a normal ducal coronet, which would be inappropriate for Gabriel, but close inspection suggests that the engraver has intended to show the velvet cloth cover arching within the circlet which denotes the crown of an infante. It, therefore, seems most likely that this elegant gun was made for the infante Gabriel shortly before his tragic death.