An Equestrian Portrait of a Nobleman in Armour, Attributed to Pasquale Ottino, c. 1578 – 1630 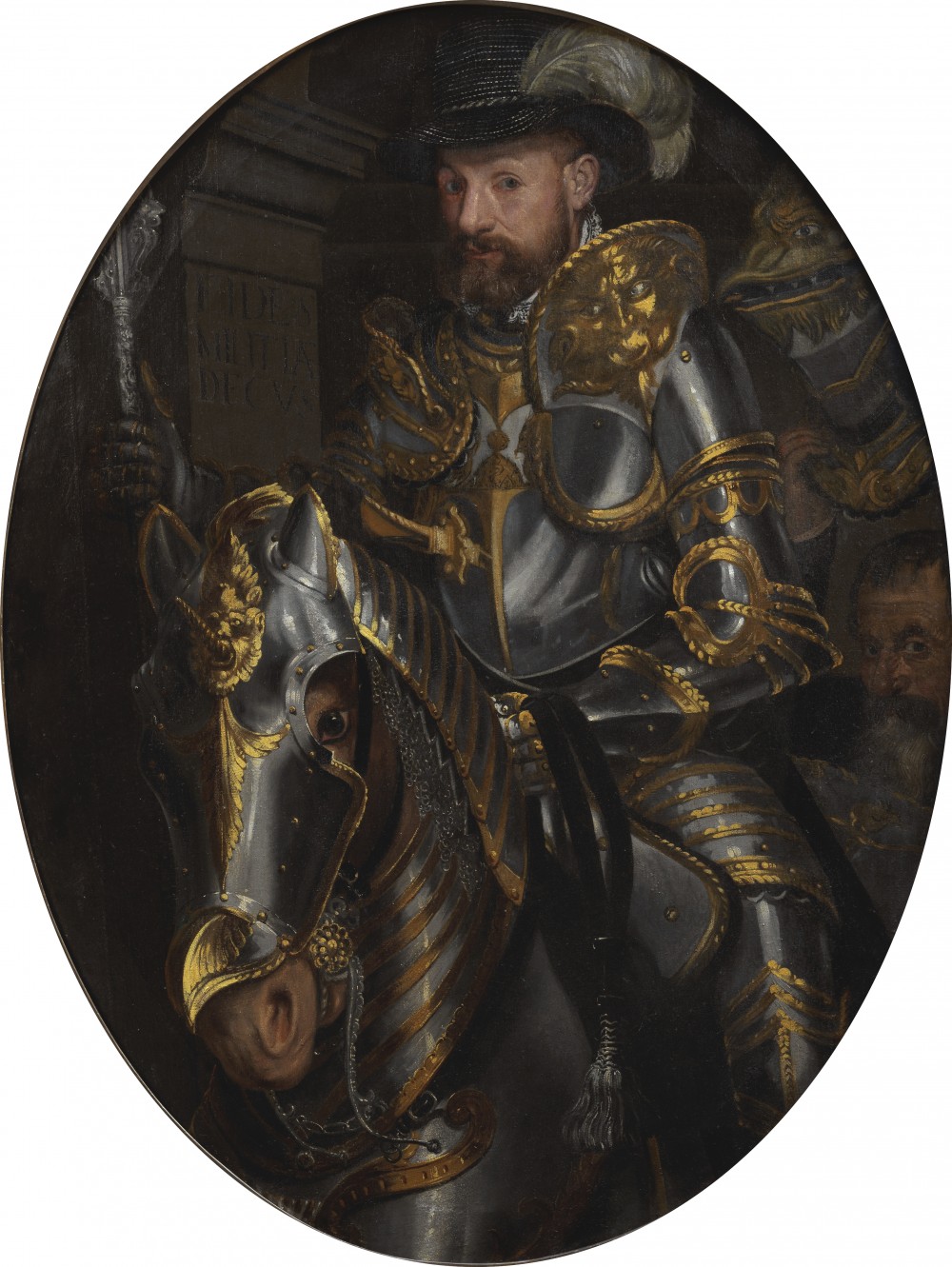 Inscribed:
FIDES/MILITIAE/DECVS on the column at left

This equestrian portrait is unusual in its format: the composition squeezes horse and rider into a confined oval which would suggest the painting was intended at one point to hang in a decorative scheme, perhaps of repeating vertical oculi. The distinctive perspective also has the effect of pressing the figures into the viewer’s space, and may have been intended as an arresting trompe l’oeil. Both the nobleman on horseback and the wizened servant peeping out from behind the horse, gaze directly out of the work. Their position would seem to indicate that the picture was meant to be viewed from a little above eye level.

The ornate and distinctive armour worn by the nobleman plays a significant role in the composition, with both the sheen of the metal and lustre of the parcel-gilt ornament painstakingly rendered. Fortunately we do have some information about the armour itself. The distinctive close helmet was once in the collection of Lodovico Moscardo in Verona and can be seen in a woodcut illustration of his museum, published in 1672. The helmet is shown along with a laminated cuirass that was perhaps originally part of the same set, though it does not match the breastplate shown in this painting.

The original owner of the armour has not yet been identified. It is thought that he may have been a member of the della Scala family of Verona, based on Moscardo’s own claim that the helmet, cuirass, and additional weapons in his collection had once belonged to Cangrande I della Scala (1291 – 1329), a fanciful historical association that nonetheless suggests the possibility of a della Scala provenance. The main family line had become extinct by 1592, having ruled Verona during the late 13th and 14th centuries, and Cangrande I succeeded his brother Bartolomeo (during whose reign Shakespeare’s Romeo and Juliet are alleged to have lived and died). The helmet seen here was acquired by the Metropolitan Museum of Art in 1929, apparently from the Counts Erizo of Verona, and still remains in that New York collection.

The attribution of the present painting to Pasquale Ottino is based largely on stylistic similarities to three other portraits by Ottino, reprensenting Girolamo I Pompei, called ‘il Malanchino’, Alessandro I Pompei, and Alessandro II Pompei. The Pompei pictures were originally painted for the gallery of the Palazzo Pompei alla Vittoria in Verona, where they served to bolster the title and the family genealogy. Designed by Michele Sanmicheli (1484 – 1559), the palace was built between 1535-40 as the home of the Pompei di San Paolo family. Following the death of Count Giulio Pompei (and the extinction of that family line) in 1852, the palace and its art collection were bequeathed to the city of Verona.

There are a further three portraits of the same oval format and similar dimensions in the civic collection of Verona, largely illegible now thanks to old damages (inv. 6881-1B1447, 6882-1B1448, 6883-1B1449). All of the portraits were originally rectangular. It is believed that they were cut down to their present oval format in the eighteenth century. Our portrait may represent another as-yet-unidentified member of the Pompei family. It is oval in format, though like the Pompei portraits it was probably conceived as a rectangle. It is slightly larger in its measurements than the portraits of the rest of the Pompei series. The inscription on the column “FIDES / MILITIAE / DECVS”, a tribute to military glory, yields no clue as to the identity of the sitter.

We are grateful to Pierre Terjanian, Curator of the Department of Arms and Armour at the Metropolitan Museum, for not only recognising the connection between this painting and the Metropolitan Museum’s close helmet, but moreover suggesting the persuasive attribution to Ottino. Pasquale Ottino was apprenticed in the workshop of Felice Brusasorci alongside Alessandro Turchi (called “Orbetto”) in his native Verona, where he spent most of his career. He is best known for his paintings on slate, which was quarried in the hills around Verona. This portrait is on a canvas support but retains the characteristic dark ground of Ottino’s work on slate, a quality that highlights the shining details and reflective surfaces of the polished armour. The attribution to Ottino is also supported by Sir Timothy Clifford, director of the National Galleries of Scotland from 1984 to 2006.