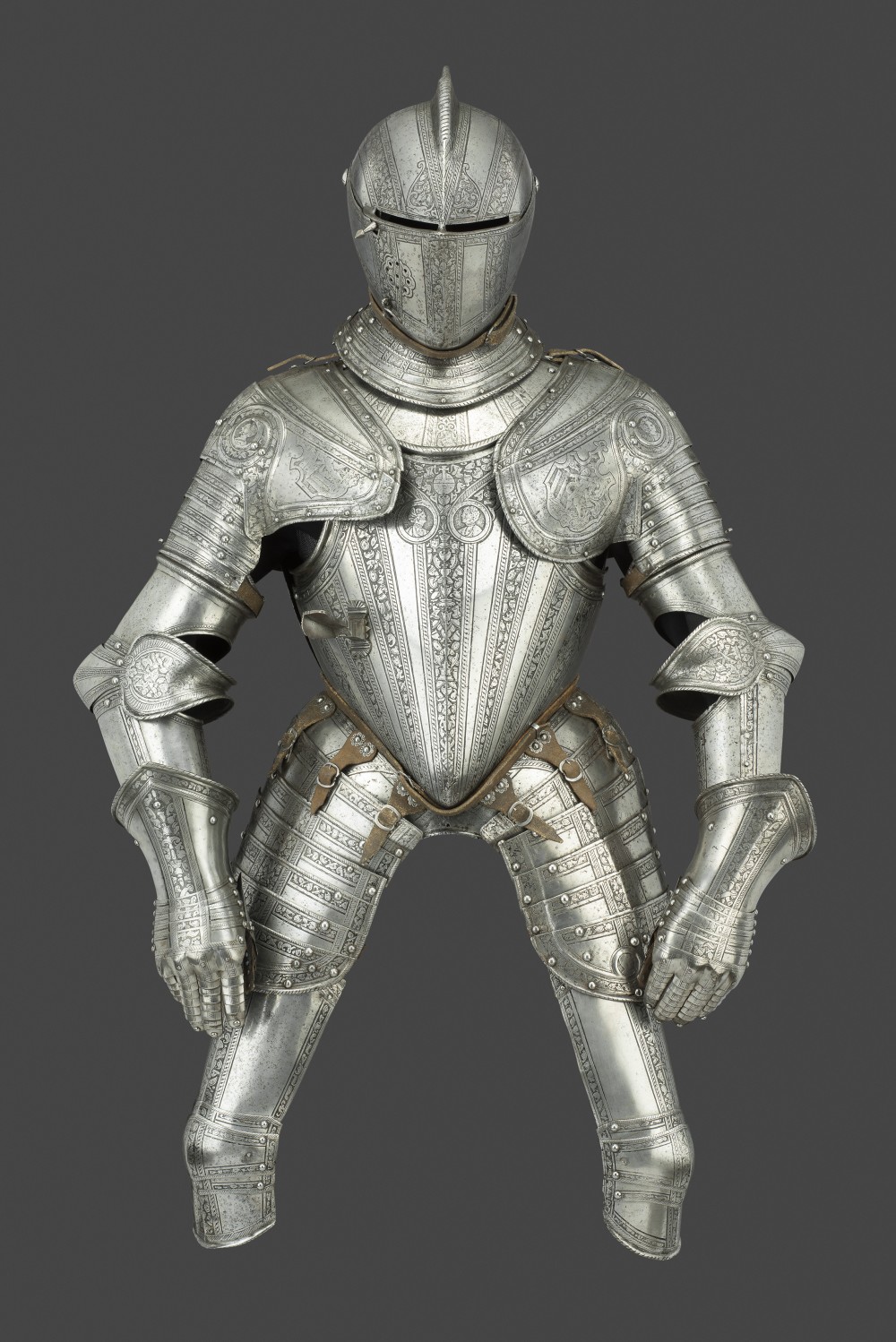 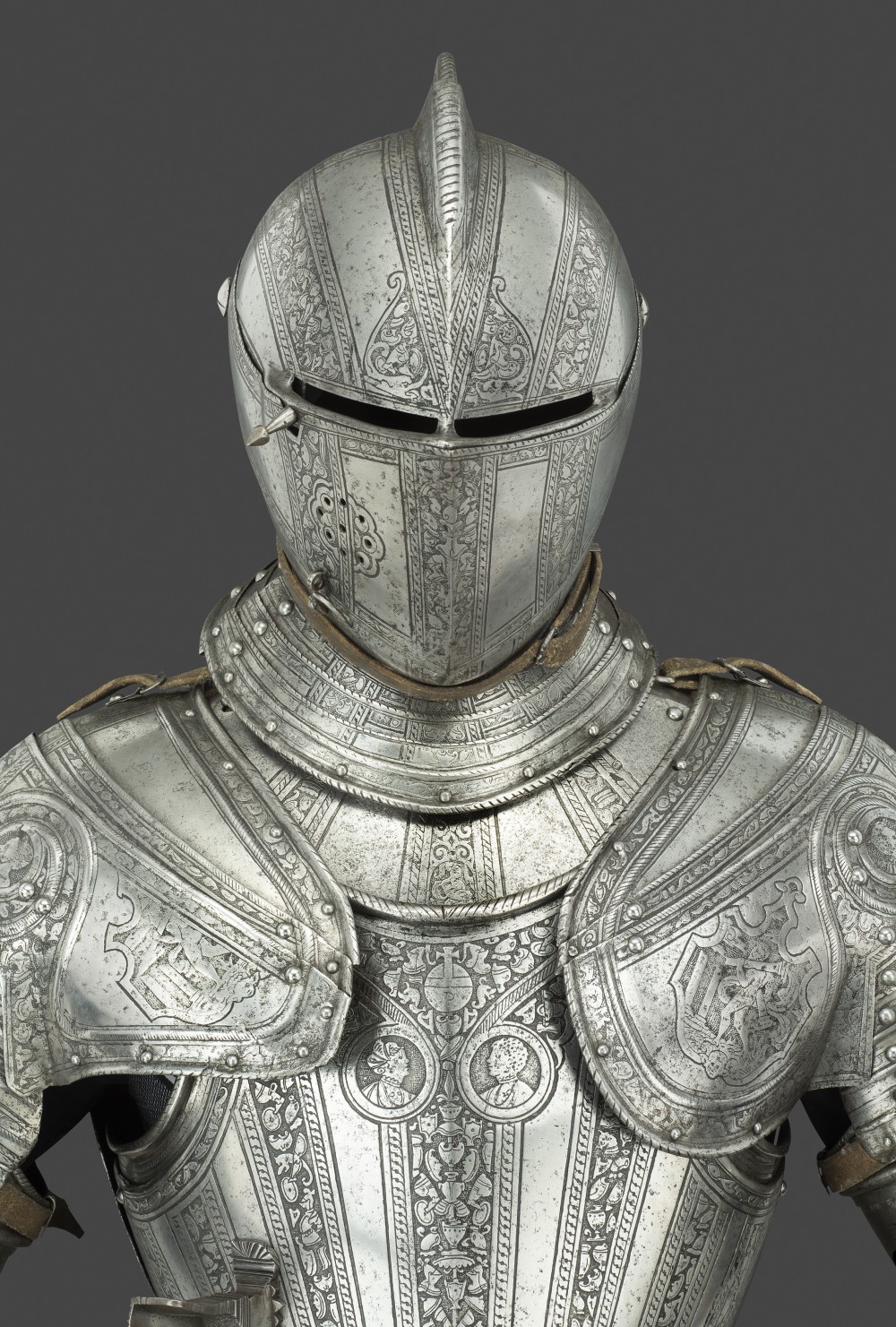 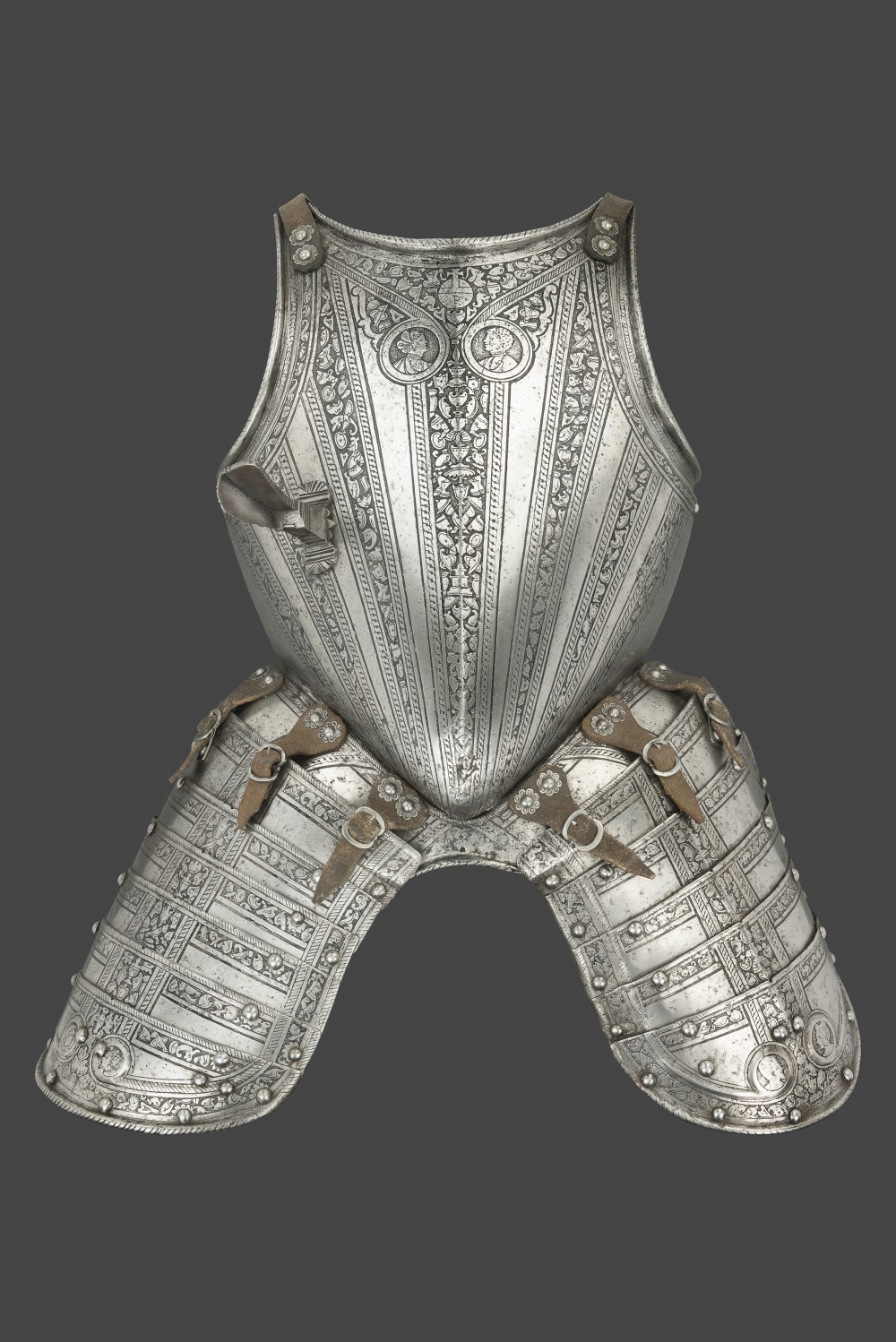 Signed:
Antonio Piatti's mark of an orb and the letter 'P.' on the breastplate

This armour was intended for wear by a mounted knight in warfare. Its helmet opens easily and fully for ready ventilation, the overall flexible configuration and the relatively light weight of the plates would have given its wearer the essential freedom of quick movement and relative comfort when worn over extended periods on the field of battle. This armour differs from one used in foot combat; the folding lance-rest fitted to the breast-plate was essential in supporting the unbalanced weight of the lengthy wooden lance, the primary weapon of the 16th century knight fighting from a horse. The shoulder defences (pauldrons) each formed of a series of overlapping plates are notably asymmetrical at their front, the largest of the plates on the rider’s right is shaped to accommodate the rear portion of the lance which is held firmly beneath rider’s right shoulder.

The helmet fully enclosed the head, differing from the open-faced types most frequently worn fighting on foot. With the helmet skull correctly lined and laced to a close-fitting inner cap the seemingly impossibly narrow vision apertures of the visor in fact provided a reasonably good field of vision. The lowest plates of the knee defences (the poleyns) are correctly formed for wear as a lighter armour of three-quarters length, a popular configuration with Italian horsemen in the second half of the 16th century, but would alternatively accommodate the addition of lower leg defences if required. A similar etched three-quarter armour is preserved in the museo Poldi Pezzoli in Milan (n. inv. 340), although unlike ours it is composite, the catalogue referencing the present armour also: see Boccia and Godoy 1985, cat. no. 10, pp.77-8, ill.p.184.

In all of these respects the present armour differs considerably from Italian armour of this same period which was built for specific use in equestrian sporting tournaments. In that instance the rider required little freedom of movement over short bouts and emphasis was given instead to maximum protection against the great impact of a single opponent’s aimed lance tip delivered with enormous force.

Whereas these Italian heavy tilting armours were invariably undecorated, the armours for field combat, such as this present one, were upheld as specially prized possessions, not only as objects of masculine renaissance fashion, but importantly as public affirmations of knightly lineage and its attendant status. Regarded as such, these armours gleaming and splendid provided an ideal medium for further artistic enrichment. Elaborate etched patterns were applied to the surfaces of all of the individual plates, with particular attention lavished on the helmet, the breast- and back-plates and the broad expanse of the shoulder defences.

The present armour is a prime example of the luxurious etched armour produced in the workshops of Milan and Brescia from about 1565 to 1590. These centres of production contrived arrangements of etched bands of ornament involving classical heroes and trophies of war, emblems which were the imagery of centuries old Italian culture, glorious deeds and victory.

The etched ornament is formed as a series of bands of closely packed trophies of renaissance armour, involving small grotesques, and predominantly within vertical linear-framed guilloche borders. The same theme is continued in a more simplistic pattern within narrow horizontal cabled bands bordering the edges of the plates.

The broad expanse of the larger pauldon plates is filled left and right with a renaissance cartouche enclosing a representation of Hercules carrying the Pillars of the Gates of Gades; the corresponding cartouches at the rear framing Hercules killing the Nemean Lion, respectively classical allusions to fortitude and bravery.

The etched ornament on both the breast-plate and its matching back-plate radiates from their respective bases to a pair of 16th century male and female profile busts, framed by roundels forming the terminals to a pair of cabled volutes below the neck.

Prominent on both plates, slightly above and between these roundels is an enigmatic etched orb device, its lower-half enclosing the letter P. This is the mark of the Milan-born armourer Antonio Piatti, who worked in Florence at the court of Grand Duke Cosimo I (1519 - 1574). The etched device is found on a North Italian etched breast-plate in the Marzoli museum in Brescia (Inv. n. 930). A slightly smaller version of this device is also etched on the breast-plate and back-plate of portions of an Italian armour preserved in the Wallace Collection, London (A 57), with reference to the present armour under discussion, and with reference to a further so-marked breast-plate in the Royal Armouries, Leeds (No. II. 50): see Norman 1986, p. 29.

In its modern history this armour was acquired in 1905 by the American-born John Jacob Astor V, 1st Baron Astor of Hever (1886-1971). His wonderfully historic English home, Hever castle in Kent, had until 1539 been the seat of the Boleyn family. This armour formed a part of the appropriate acquisitions which made Hever a jewel among English privately owned collections of works of art and armour.