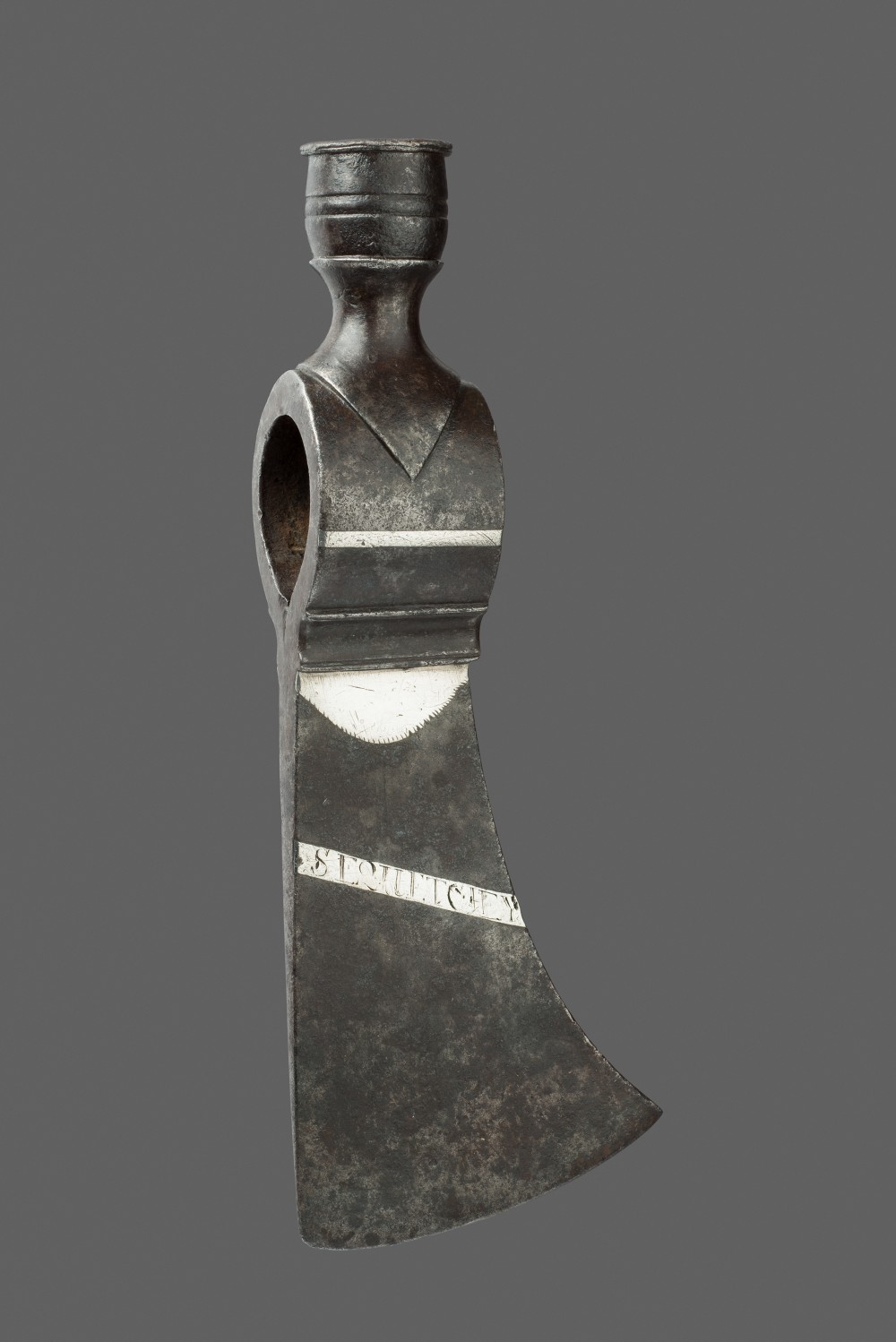 The first pipe tomahawks seem to have been introduced for trade or presentation among the eastern tribes around the beginning of the 18th century, although no early documentary evidence survives from this early period. The painting by Simon P. Verelst of four Iroquois chiefs during their visit to London in 1709-10, entitled “The Four Kings of Canada”, shows the subjects armed with clubs and metal pipe tomahawks. High quality examples such as this were manufactured in England, generally of steel, but evidently some were made with iron heads with a more expensive steel cutting edge set in, a process then known as “laying on an axe”.  Writing in 1765 on the trade with tribesmen, Sir William Johnson estimated the cost of trade tomahawk to be 3 shillings, whereas the value of a fine silver-inlaid example would be 20 shillings.

An example of two pipe tomahawk heads of very similar construction to the present example are preserved in the historic Fort Ticonderoga collection, one plain and the other inlaid in brass; see Woodward, fig. No. IV. Another example of this type, decorated with comparable silver inlays, was formerly in the celebrated William H. Guthman Collection: see Neumann 1973.

The name “SEQUETCHEY” is a version of “SEQUATCHIE”, an Anglicised phonetic derivation of the Cherokee word “ SIQUACHE-TS”, a word shortened in colloquial use by the Cherokee, taken from its longer form “SIQUA-UTSETS”, meaning OPOSSUM in translation, or literally GRINNING PIG. The Henderson Roll taken in 1835, the last White census of the Cherokee in the east prior to the forced migration known as “The Trail of Tears”, records a Cherokee named “SEQUAHCHEE” living in Georgia. The name “SEQUATCHIE” is also that of a river which has its origin in Cumberland County, Tennessee, West of Chattanooga. It is also the name of a county in Tennessee formed in 1857, and that of a valley in the same state. Allegedly, a Cherokee chief named “SEQUACHEE” was a signatory to the Turkeytown Treaty with the colonial government of South Carolina, signed on 8 July 1817, but there is apparently a lack of evidence to support this.

In his memoirs of his service in the French and Indian Wars of 1756-65, Lt. Henry Timberlake describes the pipe tomahawks made by Europeans and used by the Cherokee. He goes on to describe their skill at throwing these weapons so that they will kill at a considerable distance.

In the wake of the Second Cherokee War of 1776 the tribal settlement near Chattanooga was established by Chief Dragging Canoe. From there he fought a guerrilla war, the Chickamauga Wars of 1776-94, which were concluded by the Treaty of Tellico Blockhouse, 7th November 1794. The period of conflict with white settlers would have almost certainly precluded trade and consequently the production of high quality trade goods such as the present tomahawk. The conclusion of hostilities would have reversed this position with immediate effect in the hope of cementing the peace.