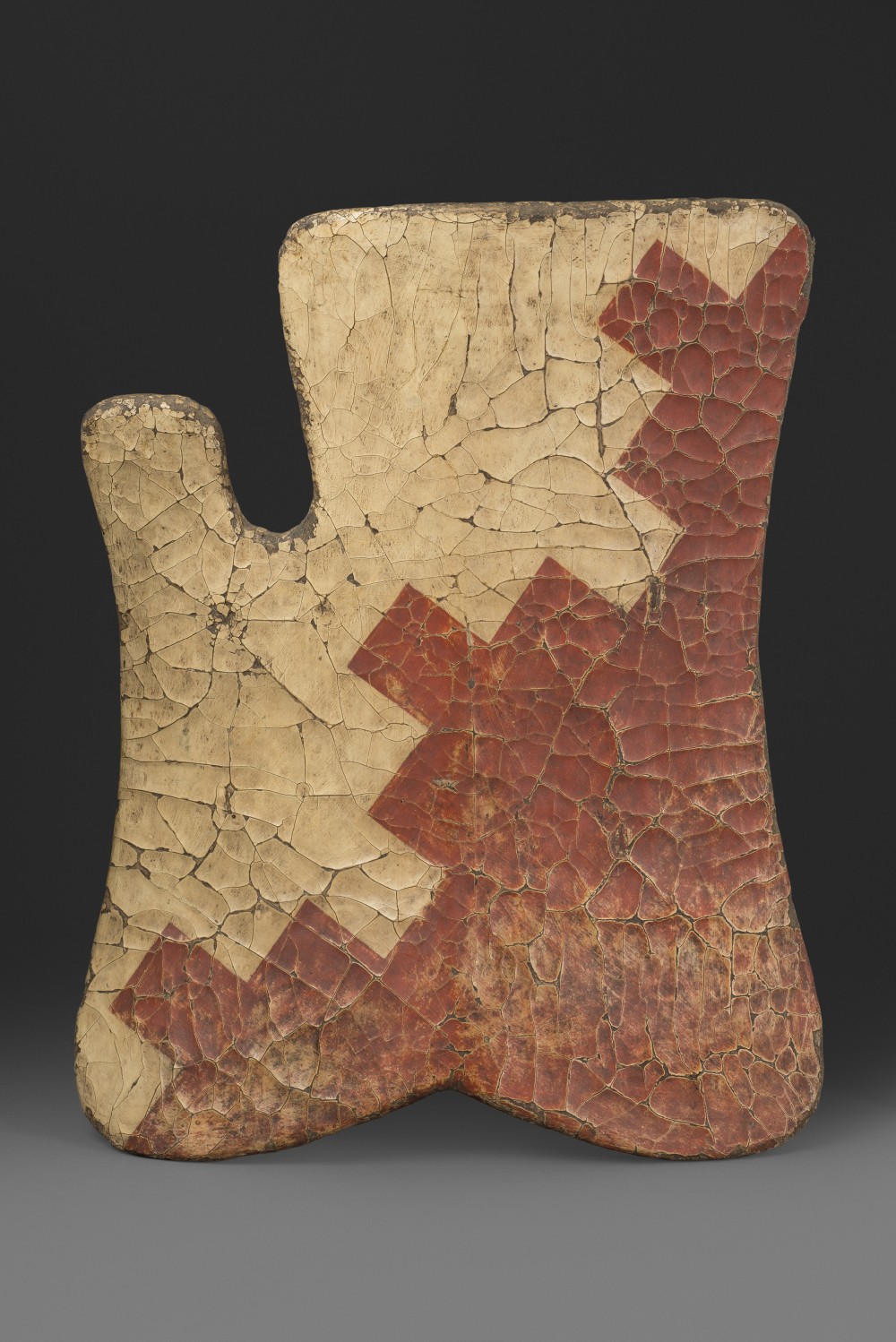 Of the countless thousands of cavalry shields that must have been made in the course of the Middle Ages, scarcely three score survive today. The present, exceptionally well preserved example is of the ‘bouched’ form first recorded in German monuments of the mid-14th  century. The rectangular outline and vertically concave face, however, place its manufacture within the following century.

Four 15th century shields of this ‘bouched’ form, formerly suspended over monuments of Behaim family of Nuremberg, are now to be seen in the Metropolitan Museum of Art, New York, (Acc. Nos 1925.26.1-2 & 5-6). In the same museum there is a further shield of this type from Burg Reifenstein, Tyrol, bearing the arms of a member of the Maissau family. To this short list can be added an example in the National Historical Museum, Stockholm (Inv. No. 8455:8), formerly suspended over a monument, probably of Karl Laurentsson of Frötuna (recorded 1497-1504), in the church of St. Mary, Sigtuna; another in the Universitätsmuseum, Marburg, formerly suspended over a monument in the Church of St Elizabeth, Marburg; another in the Wallace Collection, London (Cat. No. A 309), said to have come from the Imperial Arsenal in Vienna; and another in the Philadelphia Museum of Art (Cat. No. 272), bearing the arms of the Nuremberg families of Haller and Imhof.

The majority of these shields are of late 15th century ‘Gothic’ form, with cusped edges and vertical (usually diverging) ribs of the kind illustrated in the Waldburg-Wolfseggesches Hausbuch of about 1475-80, and the Thunsche Skizzenbuch of about 1480-85. The present example, however, with its simple outline and unribbed form, finds its closest analogies in the Maissau shield and the earliest of the Behaim shields in the Metropolitan Museum of Art, which are thought to date from the mid-15th century or before. A shield of this kind can already be seen in an illustration prepared by Michael Althaymer of Augsburg in 1400 for Hugo von Trimberg’s Der Renner in the Royal Library, Stockholm (Inv. No. Vu 74).

From the evidence of the Waldburg-Wolfseggesches Hausbuch and other illustrations of the 15th century, shields of the type under discussion were used both in the field and in the ‘jousts of war’ or Rennen, fought with pointed lances. Of the various shields listed above, the Marburg example, the Wallace Collection example and one of the Behaim examples in the Metropolitan Museum (Acc. No. 1925.26.6), retain the remains of fittings at their rears, suggestive of use in the Rennen. The present example, however, is fitted with the remains of enarmes and a guige of the kind used in the field. Significantly, it closely resembles in form a series of ‘bouched’ shields bearing the arms of the Upper Bavarian town of Deggendorf. Six of these are now in the Hermitage Museum, St Petersburg, while others are to be seen in the Germanisches Nationalmuseum, Nuremberg, the Bayerisches Nationalmuseum, Munich, the Philadelphia Museum of Art (Cat. No. 273), and the former collections of the Museum für Deutsche Geschichte, Berlin (Inv. No. PC 8958), and the Wartburg, Thuringia. The Bayerisches Nationalmuseum also possesses a pavise of about 1440-50 decorated with the same arms and probably made at the same time as them. There can be little doubt that the Deggendorf shields, like the pavises, were made for the defence of the town, rather than for use in the tournament.