A Pair of Gold-Mounted Flintlock Holster Pistols with Chiselled and Gilt Barrels and Locks, of Presentation Quality, by Vigniat à Marseille, c. 1800 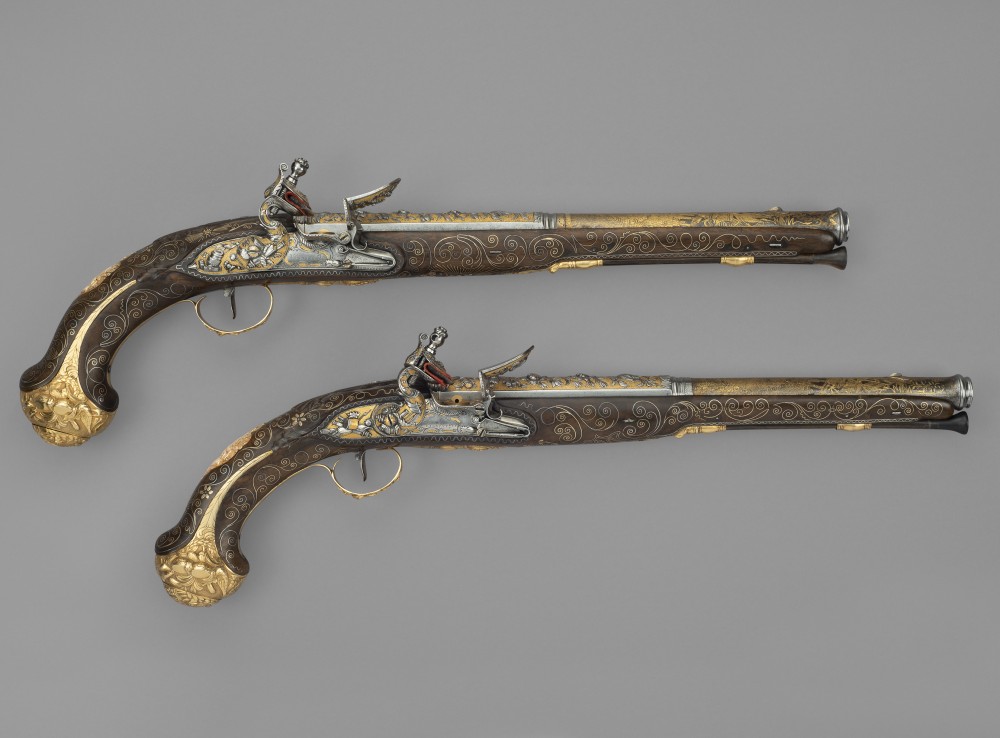 These pistols are of a highly decorated type made further exceptional by the lavish use of solid gold mounts.

Even by the standards of unrestrained luxury that is associated with the royal court at Versailles, the use of solid gold in the mounting of luxurious French firearms and swords was very rare. From the evidence of a small handful of surviving examples in museum collections, and of several late 18th century makers’ invoices, it is clear that solid gold was reserved for weapons intended only for royalty and for the outrageously wealthy.

Prevailing French national trade interests and strong influence in the Levantine countries of the Ottoman Empire provided the French luxury firearms industry with a welcome new market. Presentations of weapons from the upper tier of this luxury trade were made to ruling potentates to cement significant treaties, as gifts in return for favourable concessions, or traditionally as fitting rewards for a military alliance.

This exotic provenance, either actual or at least intended, is born out in the present pistols by the inclusion of small motifs and emblems within the ornament, which are designed to appeal to the Ottoman courtly taste. Invariably, however, these presentations were of weapons mounted in gilt-brass, or silver-gilt at best. The exceptional richness of the present pair of pistols must indicate that they were intended for a recipient of equally exceptional rank and importance.

The gold mounts are struck with the mark of C. Coppin, perhaps Claude Coppin, a goldsmith recorded in Paris during the period. It is entirely reasonable to suppose that the gun-maker, Vigniat of Marseille, would have placed an order with a prestigious Paris goldsmith for this very special commission. Notwithstanding the great distinction of their gold mounts, these pistols are also set apart by the chiselled relief decoration of the barrels and the locks. This is executed to a superb standard, a virtuoso work, and the subtle differences in the chiselled designs are very much an exhibition of imagination rather than error.

These pistols are preserved in extremely fine and original condition throughout: they are almost certainly unused, and are near-pristine.