A Massive Two-hand Bearing Sword of the City of Brunswick, c. 1570 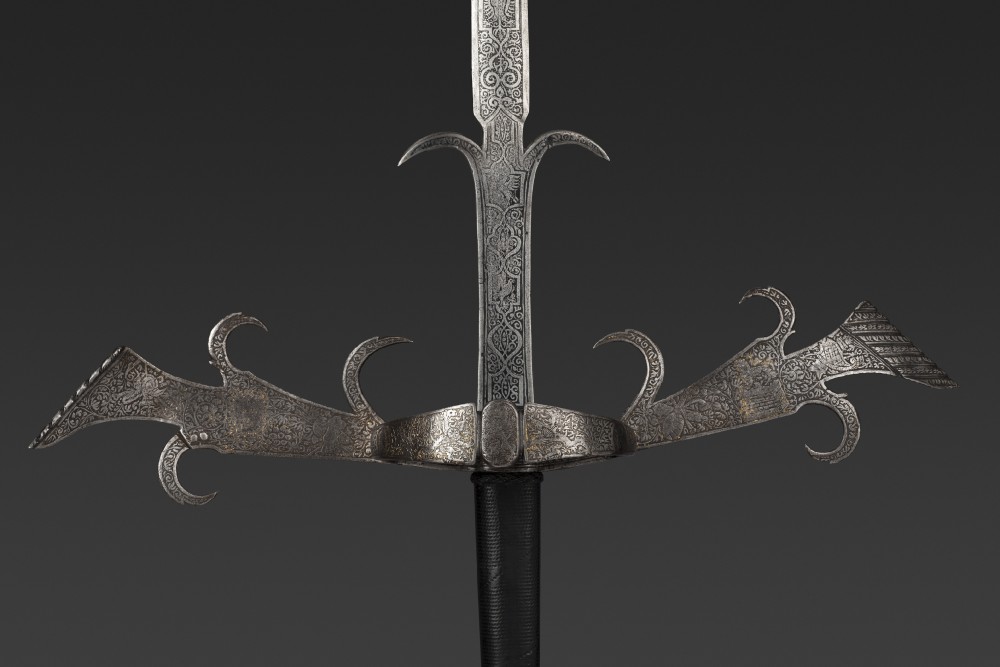 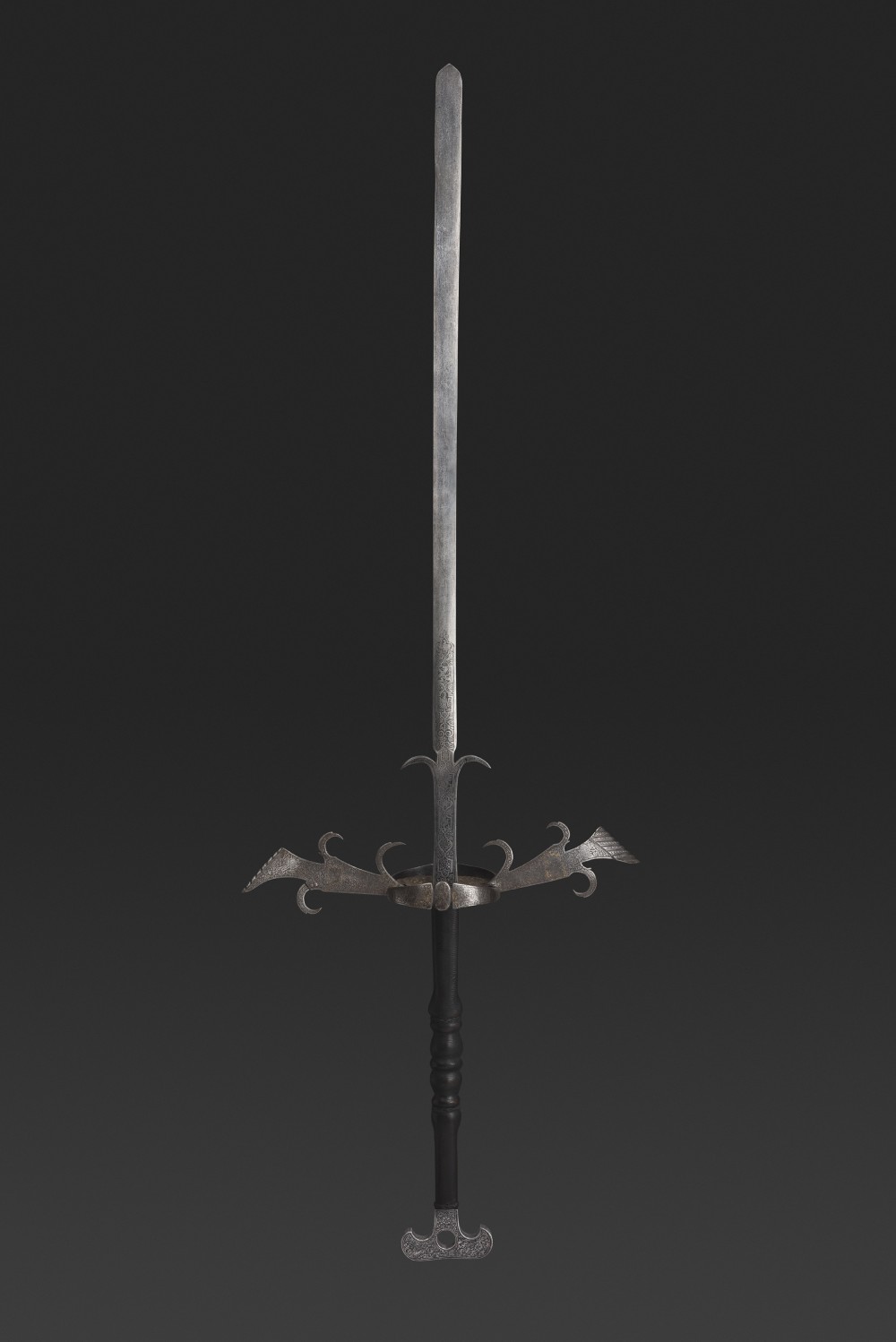 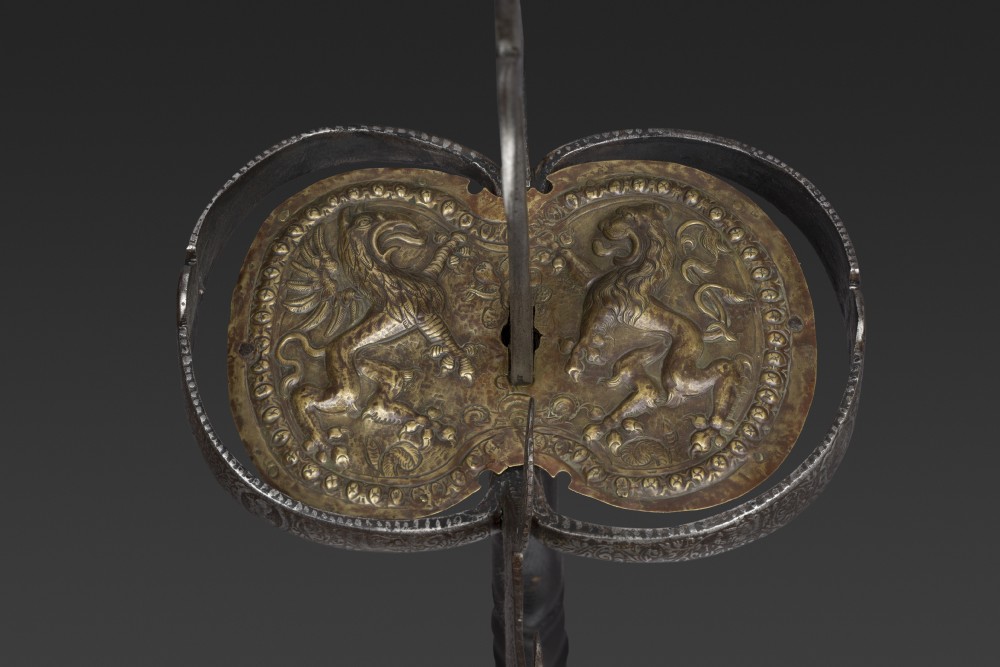 The Brunswick City Arsenal (Zeughaus); Armoury of the Dukes of Brunswick-Wolfenbüttel and their successors, the kings and princes of Hanover, housed successively in the Wolfenbüttel Zeughaus, Schloss Blankenburg and Schloss Marienburg, Lower Saxony

EXHIBITED
Tower of London, Exhibition of Arms, Armour and Militaria lent by H.R.H. The Duke of Brunswick and Lüneburg, London, 1952, cat. no. 89, pp. 26–7 of the exhibition catalogue

By the second half of the sixteenth century the use of enormous two-hand swords as a weapon was very much in decline, yet these swords remained in widespread ceremonial use, as ‘bearing swords’ carried in procession on occasions of state, as fitting symbols of power and authority. Some of the most magnificent Germanic bearing swords of the 1560s to the 1580s are those of the duchy of Brunswick in Lower Saxony. Most recognizable among these swords is the series made for the guard of Julius, Duke of Brunswick-Wolfenbuttel (r. 1568–89). Grandly accentuated proportions and stylistic features unique to the Brunswick duchy included a large pommel (shaped like the top of a crutch) and the long quillons of the hilt prominently swept outwards to ‘fishtail’ terminals. The elegance and majesty of these swords could not have failed to impart a sense of awe and deference.

The present sword, however, differs from those various series carried by the ducal retinue in that it bears none of the insignia and markings present on those types; it bears instead the heraldic and iconographic emblems of the city of Brunswick itself. Our example was most likely made in the same workshops as the ducal swords but made even larger than the ducal types. The uniquely great width of the quillons, together with the gleaming brass sheet applied uppermost within the guard and boldly embossed with the large heraldic supporting beasts of Brunswick all firmly reinforce its distinct provenance. As is evident in this sword, all of the decoration is positioned to be correctly viewed while carried aloft in procession.

This rare sword is one of no more than six of this specific type made for the Brunswick city arsenal which are today known to exist. The sixteenth-century opulence of the city of Brunswick is reflected in the unusually lavish attention to the decoration of both the hilt and the blade of this sword. Important among the emblems within the etching on the hilt is the lion standing on its masonry plinth: this represents the massive bronze lion statue, the Braunschweiger Löwe, commissioned by Henry ‘The Lion’, duke of Bavaria and Saxony (r. 1139–95). For many years following its conception this medieval monument was the largest bronze casting north of the Alps, and it has remained the most famous symbol of the city of Brunswick. The original lion is now displayed in Dankwarderode Castle there. Other of the emblems and devices on the hilt and blade are references to the original five districts of the medieval city, known as Weichbilde. In the spirit of self-sacrifice and loyalty popular within Germanic iconography during the second half of the sixteenth century, the mythical Roman hero Marcus Curtius is shown in repeated cartouches on the quillons, as he is poised to ride headlong into the fiery gulf and so close it for the salvation of Rome. A pair of high-ranking male and female profile busts confirm the period in which this sword was made: their respective ruffs and headdress were the pinnacle of fashion in the 1570s. The presence of an owl may be a reference to the traditional story of Till Eulenspiegel (the surname means ‘Owlmirror’; he is called ‘Owlglass’ in English stories about him), a legendary fourteenth-century prankster of Brunswick popular in the city’s folk tales.

Following the capitulation of the city of Brunswick in 1671 to Duke Rudolf August of Brunswick-Wolfenbuttel and the dukes of Brunswick-Luneburg and Calenburg, Duke Rudolf imposed absolute rule over the city, all civic insignia were confiscated and the city swords were incorporated into the extensive armoury of nearby Schloss Wolfenbuttel, the ducal seat. Presumably, our sword continued to be used on state occasions but was borne by a member of the ducal bodyguard rather than by a servant of the city.

Some of the contents of the armoury at Schloss Wolfenbuttel were over time transferred to Schloss Blankenburg in the Harz mountains, another of the ducal family residences and where the pieces were to remain until relatively modern times. 1866 brought the defeat of the Kingdom of Hanover by Prussia; around this period some items from the ducal armoury entered the Vaterlandischen Museum, now the Brunswick Landesmuseum, and many pieces were also sold on the art market. Other pieces, such as this bearing sword, remained with the family until recently.