A Pair of Percussion Pistols by Eusebio Zuloaga, Eibar, dated 1850 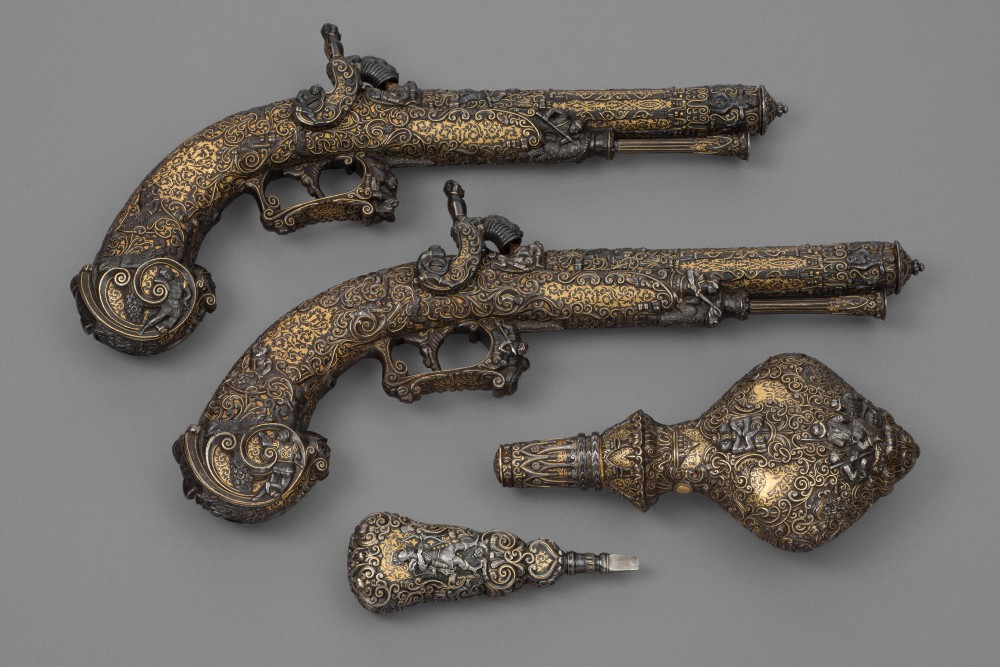 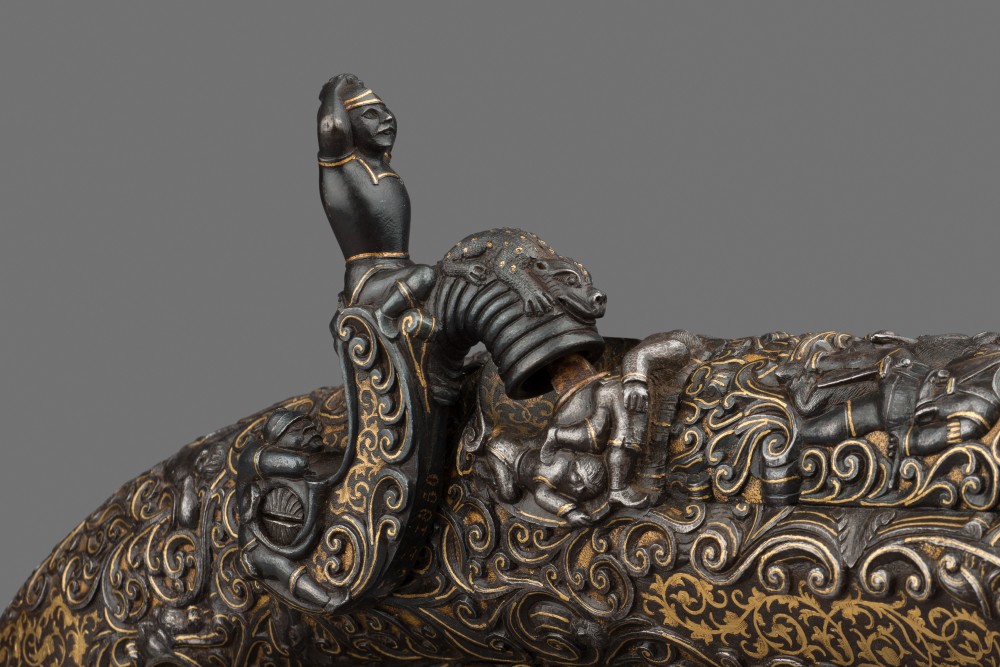 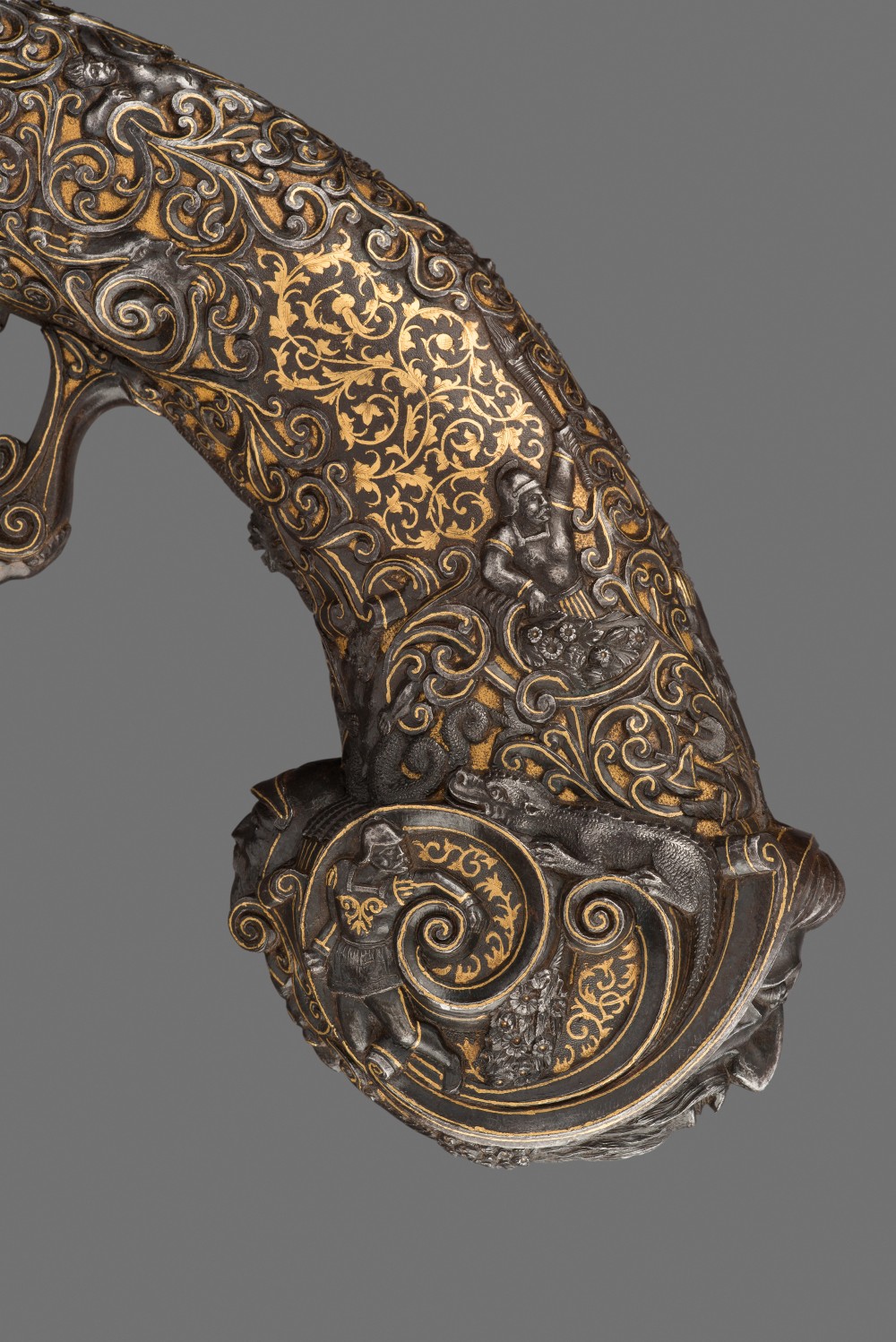 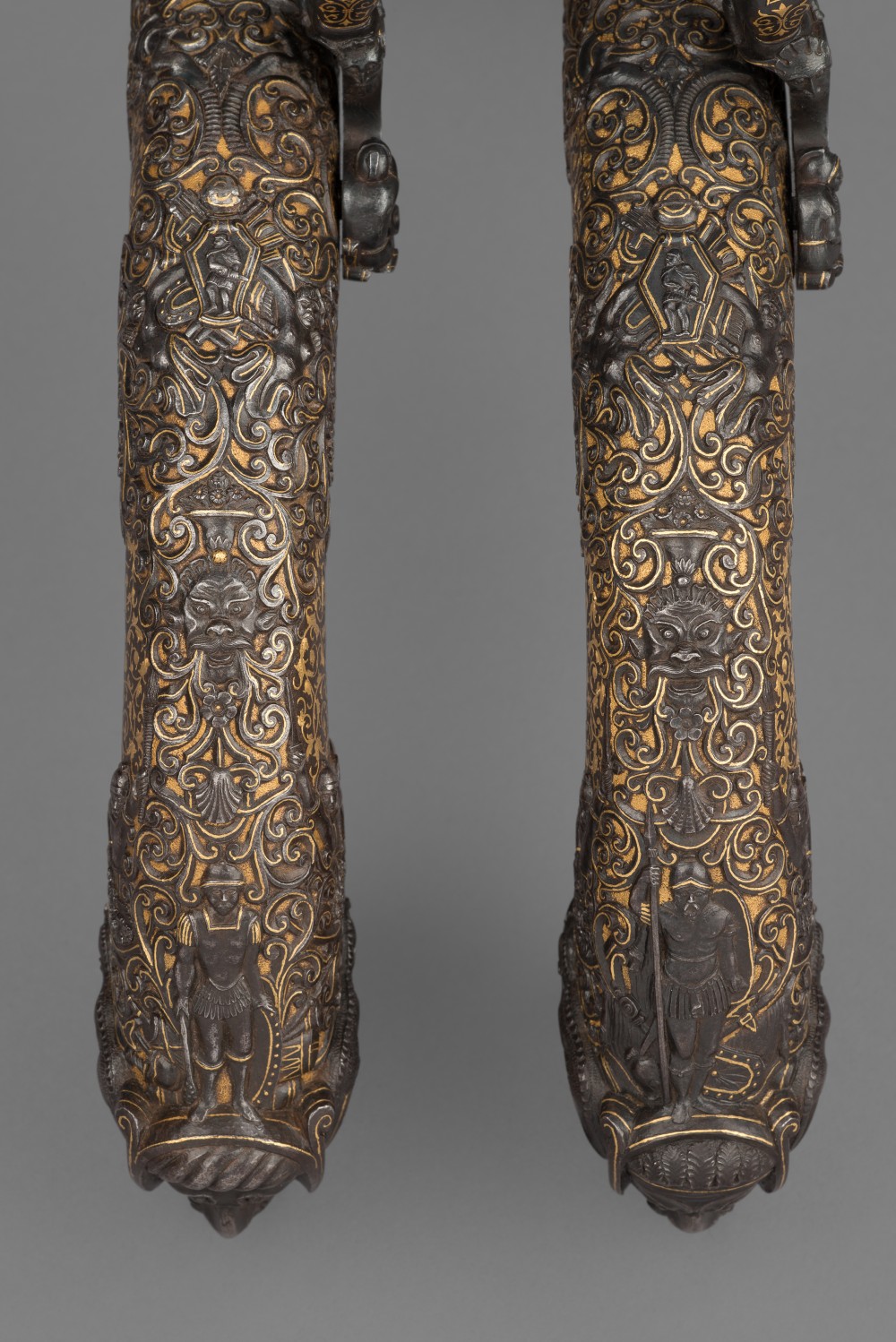 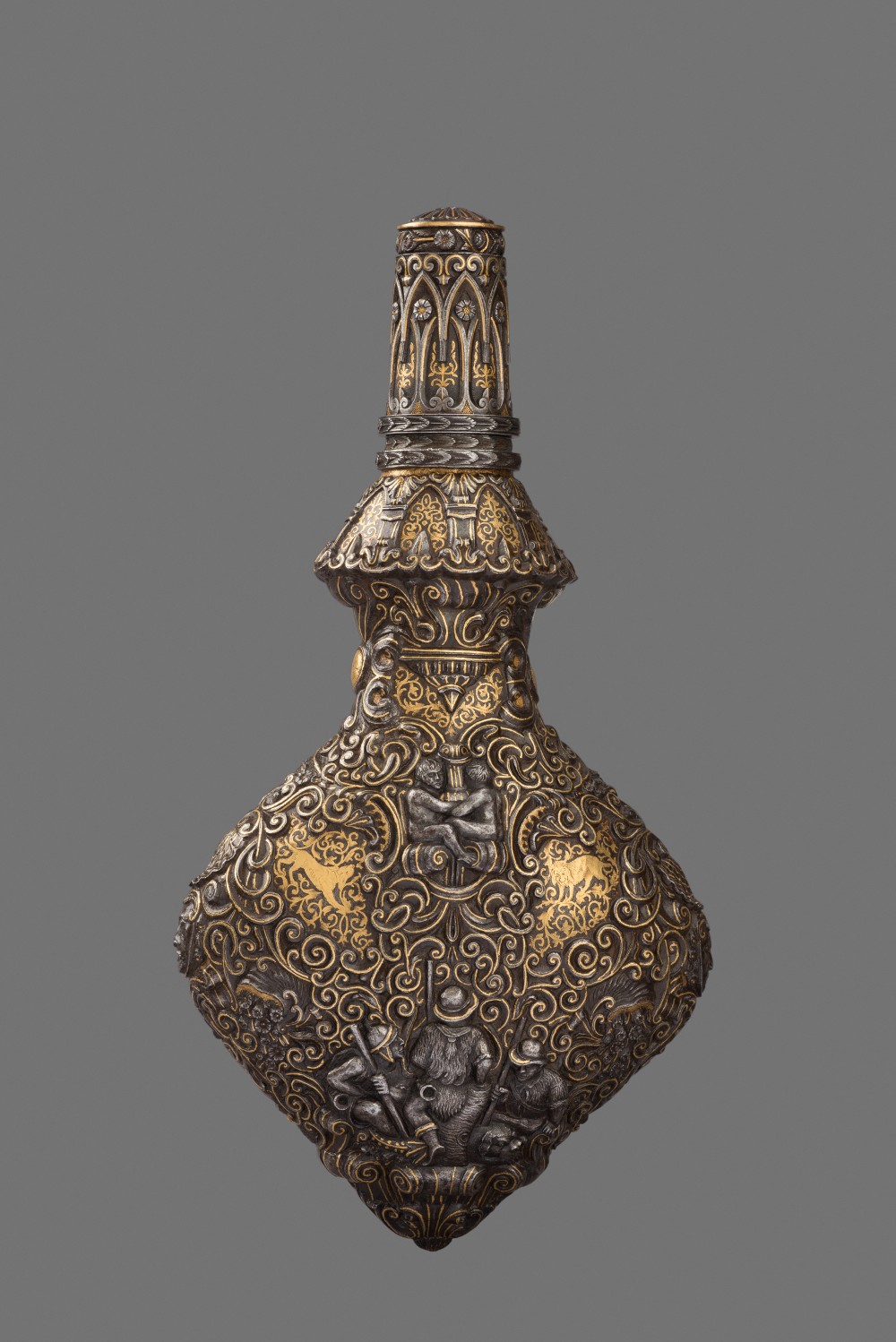 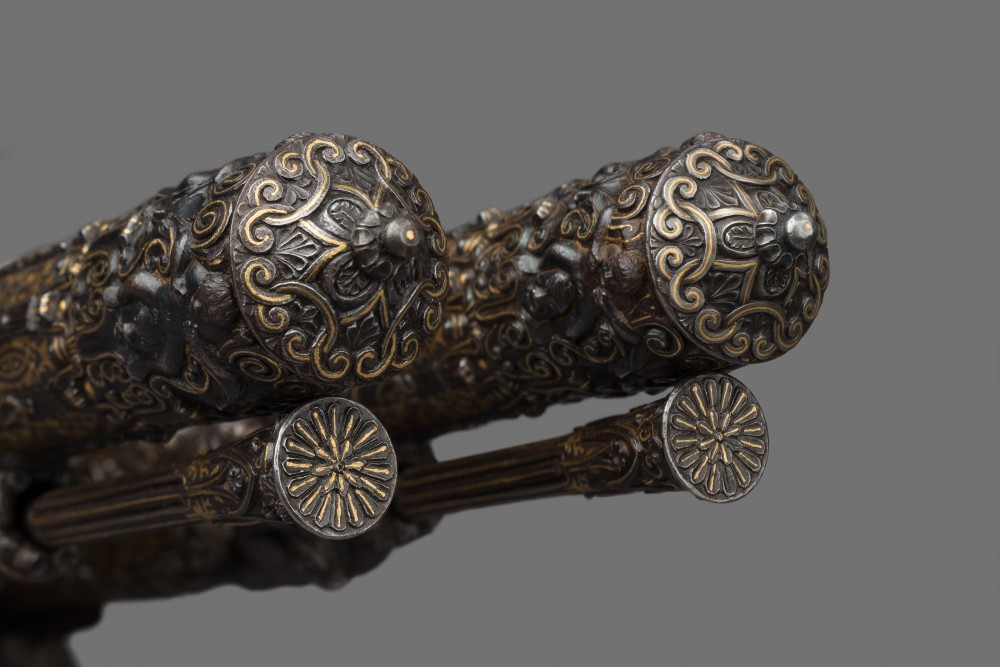 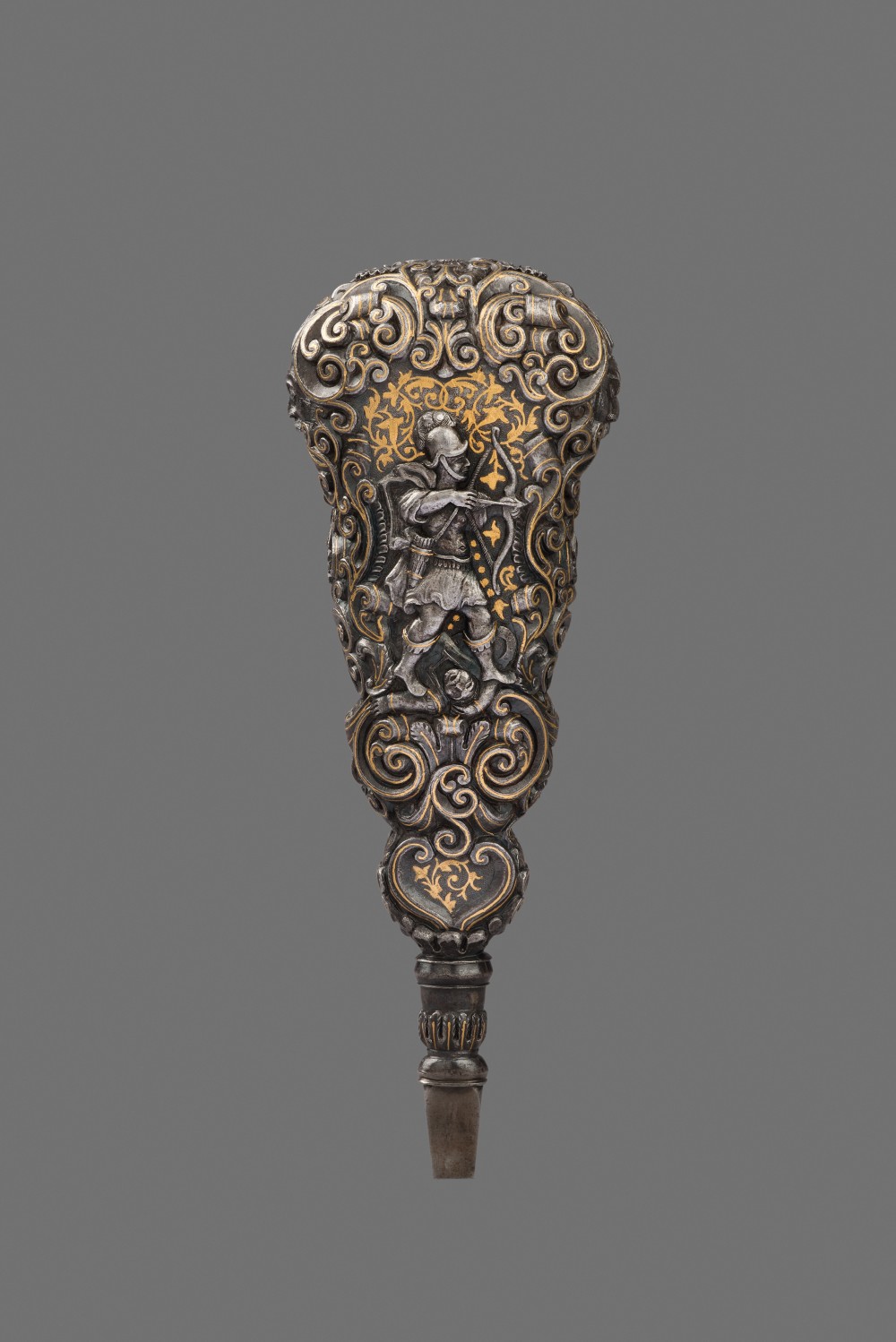 The Palacio Real, Madrid. Exhibited from 1856 within the panoply of Zuluaga’s elaborate arms all made for presentation to Ramón María Narváez, 1st Duke of Valencia, and retained on display in the royal palace following his death at least until after circa 1880-90, and most probably later than 1907
Private collection, South America

Exhibited:
The Great Exhibition, London 1851
L’Exposition Universelle de Paris, 1855
The Palacio Real, Madrid. Exhibited from 1856 within the panoply of Zuluaga’s elaborate arms all made for presentation to Ramón María Narváez, 1st Duke of Valencia, and retained on display in the royal palace following his death at least until after circa 1880-90, and most probably later than 1907

Literature:
Anon., Visite à l’Exposition Universelle de Paris, Paris 1855, p.564
Matthew Digby Wyatt, The Industrial Arts of the XIX Century. A series of illustrations of the choicest specimens produced by every nation, at the Great Exhibition of Works of Industry, 1851, published in two volumes by Day and Son, Lithographers to the Queen, 1851-1853. One of this pair of pistols forms part of pl.11, vol.1
Albert F. Calvert, Spanish Arms and Armour, London, 1907. These pistols, with their accessories, are not discussed by Calvert but appear in pl.198, as part of a photograph by Laurent, of a shield-shaped ‘Trophy Formed of Different Weapons, by E. de Zuloaga’ (sic)
James D. Lavin, ‘The Zuloaga Armourers’, Journal of the Arms & Armour Society, Vol.XII, No.2 (September 1986), pp.63-148. Pl.XXIII shows a photo by Laurent, about 1885, containing the pair of pistols, with accessories, together with a dagger and sheath
James D. Lavin, ‘The Zuloagas of Eibar’, an essay in exhibition catalogue (ed. JD Lavin), ‘The Art and Tradition of the Zuloagas – Spanish Damascene from the Khalili Collection’, The Khalili Family Trust in association with the V&A Museum, London, 1997, pp.41-66

When these extraordinarily fine pistols and their matching powder-flask and turn-screw were made, Eusebio Zuloaga had become firmly established as the finest exponent of his era in the art of deep and exuberant chiselling and the remarkably extensive and finely-detailed damascening of iron.

This pair of pistols, together with their very splendid accessories are all of unquestionably unique design and of a quality of workmanship also unique to Zuloaga. Together with a variety of equally inspired edged weapons, these pistols were commissioned from Zuloaga probably in 1844 or ’45, specifically for presentation to the historically important Spanish royalist soldier and statesman of that period, Ramón María Narváez, 1st Duke of Valencia (1800-1868). The design and technical accomplishment of these pistols, their accessories and every one of the accompanying weapons was an achievement of imagination and metalworking skills unparalleled within this period. Matthew Digby Wyatt, the acclaimed British art historian and Secretary to the London Great Exhibition of 1851, recorded the provenance in the exhibition catalogue, which he would naturally have received from Zuloaga himself in accompaniment of the entire group of Narváez arms, and which had formed a salient part of the Zuluaga submission to the Great Exhibition. One pistol from this pair, together with another pistol from an also unique Zuloaga pair, were chosen by Digby Wyatt from among the stiff competition of works from other distinguished exhibitors to be illustrated in a wonderful coloured lithograph in the exhibition catalogue. Digby Wyatt included in the catalogue the names of the high-ranking officers, regiments and organisations whom had subscribed to the commissioning of the Narváez gift of arms:

“ In the production of the specimens of Spanish firearms we have engraved (illustrated), M(onsieur) Zuloaga  evinces consummate skill, and we can imagine, to a military man, no more splendid offering than was made when the ‘Captain-General of Puerto Ricco (sic), the Count Mirasol, General Don Celestino Ruiz de la Bastida, the Penninsula regiments of Catalonia, Iberia and the Asturias, and the regular Militia of the year 1846’ offered the princely gift of arms to the Duke of Valencia, captain-general of the Spanish army” : see Lavin 1997, p.46.

Following the exhibition of this very special commission of arms in London in 1851, they were next included in the prestigious l’Exposition Universelle de Paris in 1855. The exhibition guide gives the following account (in translation):

“One cannot praise too highly the arms and other metal objects presented by the Sres. Zuloaga, father and son ….. iron chiselling, damascene, etching and repouseé never had interpreters of such obvious and varied talent….. A case of pistols made for General Narváez, whose pieces have all been chiselled and damascened in arabesque style, does not suffer in the least by comparison with the twp principal pieces exhibited, and with the dagger and sabre ….. The firearms, in different styles (referring to both of the pairs exhibited in London), also testify to the same qualities in these artists ….”: for the original text see Visite à l’Exposition … 1855, p.564; the translated text reproduced in Lavin 1997, p.47.

Put more plainly, they liked the pistols, a great deal.

The pistols and their accessories are contained in a fitted wooden case for display.