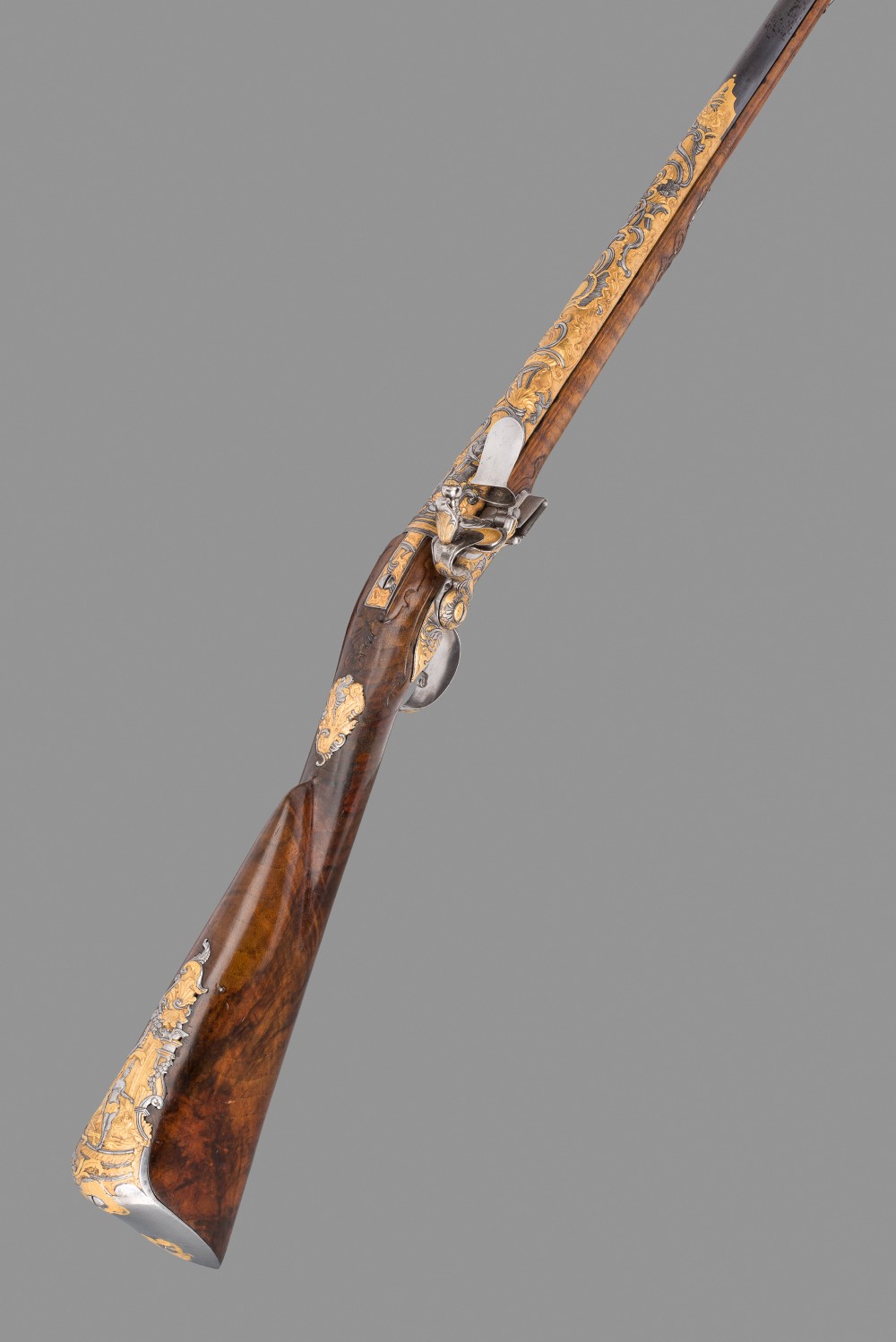 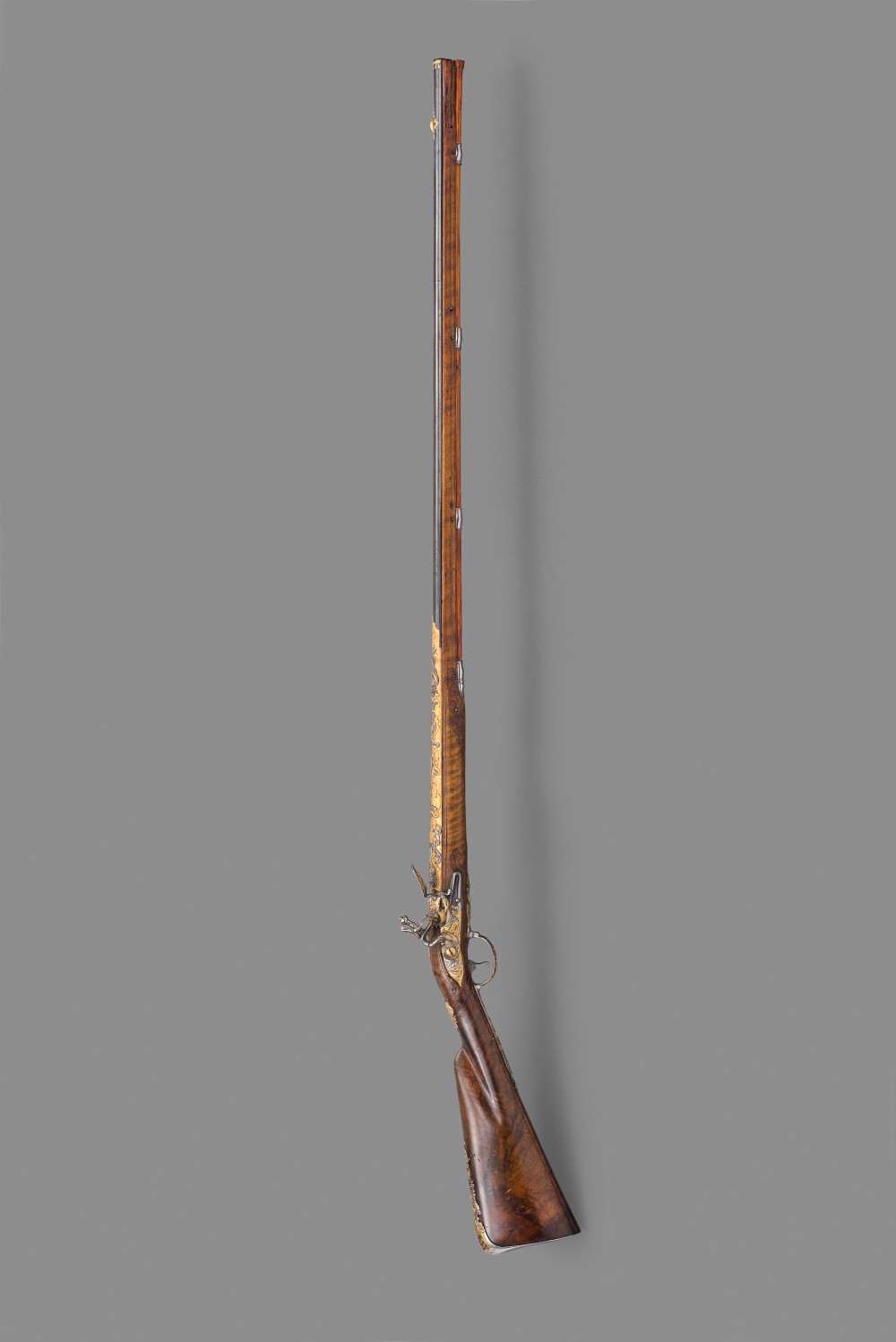 Even by the lavish standards of Russian mid-18th century luxury gun-making this gun is immediately remarkable for its abundance of unrestrained chiselled and gilt relief ornament. The chiselled designs are light-hearted and fluid in character throughout, and have an unusually bold quality made further multi-dimensional by the bright steel elements of the designs thrown into greater relief against the brilliant gilding, this being layered over both the remaining relief work as well as more conventionally over the matted contrasting background panels.

The work differs considerably from the more delicate but comparatively restrained and more formal patterns which were largely predominant within the circle of first quality gun-makers established in Tula and St. Petersburg at this time. In this instance the chiselled designs take the form of the fully developed rococo style, or genre pittoresque, which in this period was the governing theme encompassing all aspects of the new decorative splendour of the royal courts of London, Paris, Berlin and Munich. Significant within the rococo patterns which enrich this gun are figural subjects from Greek and Roman mythology, which reveal the influence of a slightly earlier Paris design palate, but not least also the uniquely shaped domed towers from Russian Church architecture, which are included in place of the chinoiserie pagodas sometimes associated with western rococo design. The domed towers foremost bring to mind Czar Ivan ‘The Terrible’s’ basilica of Vasily the Blessed, now more commonly referred to as St. Basil’s Cathedral, and which provide the prime imagery of the city of Moscow.

This transference of skilled gun-makers was to be permanent, the Moscow market henceforth reliant on the workshops of Tula and St. Petersburg. This movement also coincided with the onset of a new opening up of the imperial court to the culture of Western Europe, the embracing enthusiasm for all western decorative arts consequentially entering the wider upper tier of Russian society also. Naturally included in this new wave of western cultural influence were luxury firearms, as objects of high prestige, and it was Paris especially that set the standard for excellence in this field, from which the latest fashions spread quickly to London and to the German royal courts.

Imports of superbly decorated western firearms came to Russia in trade but also as diplomatic gifts: an example of such a gift, and one which perfectly displays the new rococo style, is an aircane gun made in London in 1741 by the John Lawrence Kolbe, a German immigrant to London. The aircane was almost certainly a gift from the British government to the Empress Elizabeth and it is now preserved in the Kremlin arsenal museum. The designs of the mounts on this aircane provide a further comparison with the present gun in that they not only include figures from classical mythology amid the rococo ornament, but notably the figure of the Sea God Neptune astride a grotesque dolphin, the composition being comparable to the River God imagery chiselled on the barrel of our gun.

In direct emulation of the western monarchies the successive Czars and Empresses of the first half of the 18th century established a highly skilled workforce of gun-makers, iron chisellers and related artisans in the previously mentioned workshops centred in Tula and nearby St. Petersburg. The primary intention was to produce essential military arms, but increasingly the focus shifted to fulfil the demand in Russia for luxury firearms in the western taste. It is for these wonderfully rich and ornate guns and pistols that the new workshops achieved the uninterrupted patronage of the Empresses and Czars even into the 20th century, and the fame of their great quality lasting to the present day.

In order to initiate modern manufacturing methods and the desired western artistry in these new centres of production it was necessary to import these skills afresh, in effect creating a radical break from the Russian gun-making traditions of the previous century.  For the greater part the craftsmen came from the German gun-making centres, and notably from Suhl, but worked to the commissions given them by Russian master gun-makers. The German iron chisellers and stock carvers working in the first half of the 18th century had in turn been strongly influenced by the new and highly fashionable designs for firearms ornament produced in Paris, distributed as engraved plates in pattern books. The designs taken from these original books, and from at least one other edition pirated in Germany, were reproduced on the barrels, locks, stocks and stock mounts of the best quality firearms made throughout Western Europe, some of these designs being copied so faithfully as to be easily identifiable in specific engraved plates. The most influential of these Paris designers in the mid-18th century was certainly Gilles Demarteau (1722-76), the pupil of the greatly influential engraver/designer De Lacollombe, the former being a leading exponent of the rococo at its peak. It is therefore not entirely surprising to note a strong resemblance between the pattern of rococo scrolls, shells and festoons chiselled along the barrel of our gun and a framework of related ornament which illustrates the title page of Demarteau’s pattern book published in circa 1750, under the title “Nouveaux Ornemens D’Arquebuseries …… “. Further smaller details found within the decoration on our gun also appear in an earlier book of engravings by De Lacollombe, added to and published by Demarteau after 1744. On this evidence it seems most plausible that the master ‘T.L’, working in Russia, would have had sight of these highly fashionable published patterns and incorporated their flavour within his own designs.