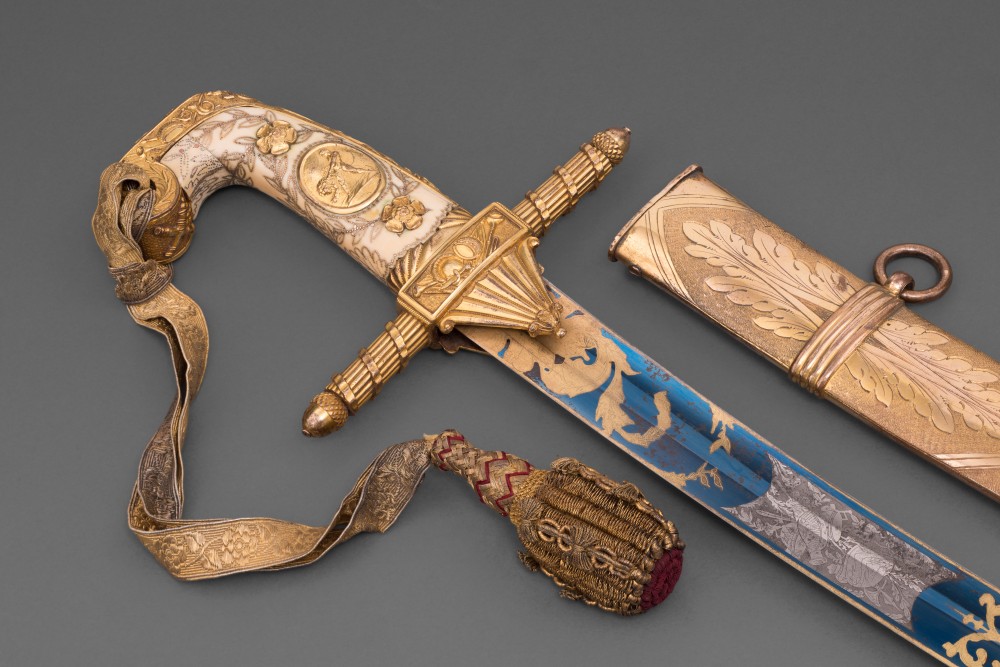 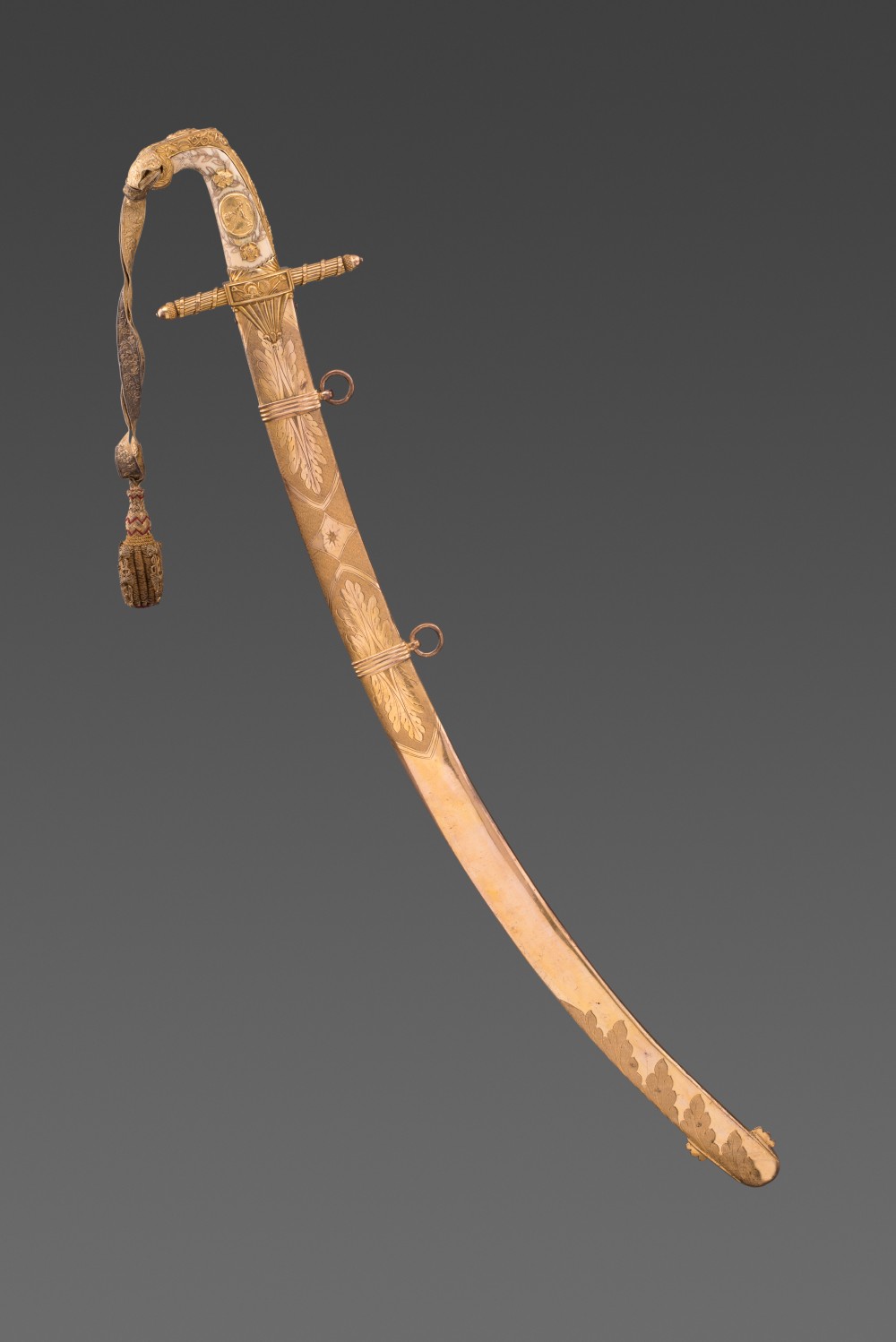 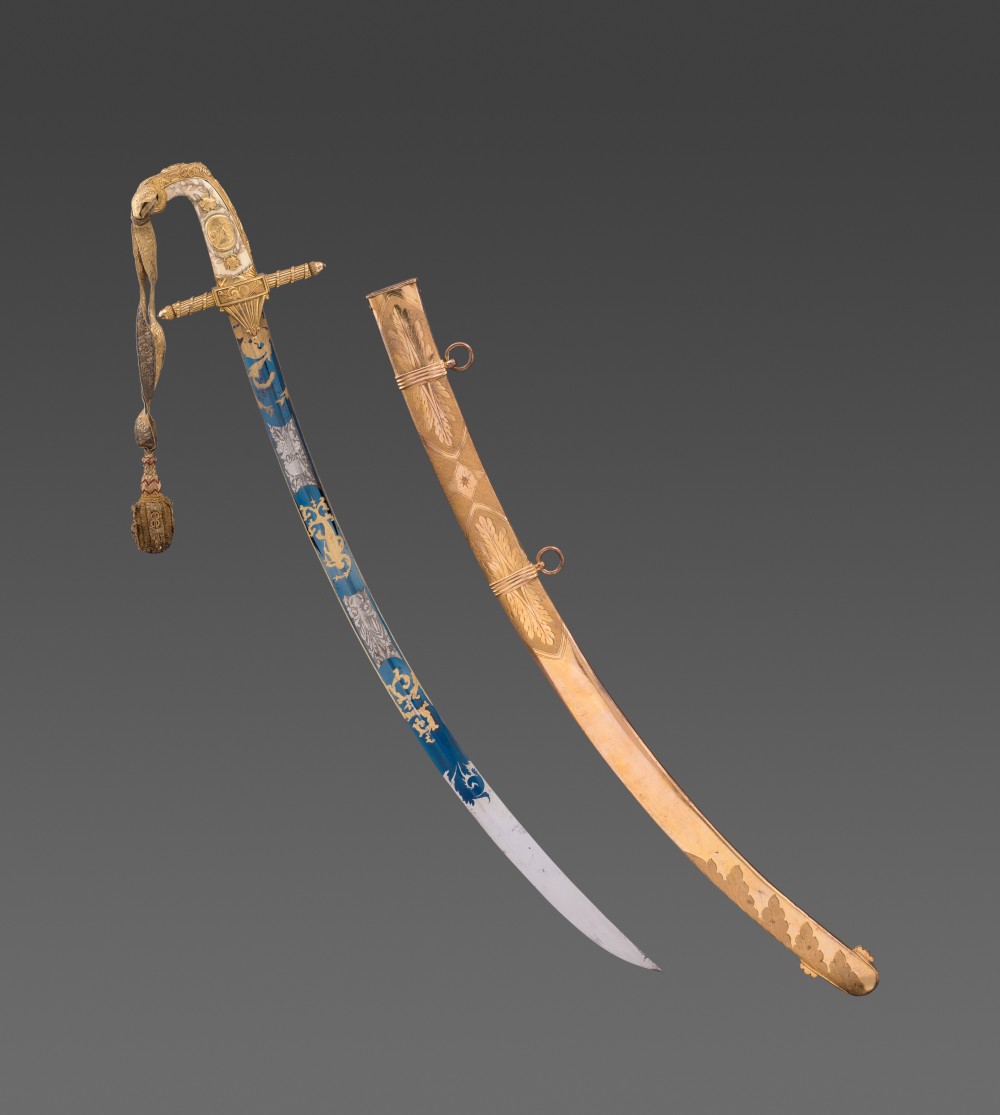 This sword perfectly displays all the dash and flamboyance captured in the portraiture of officers of the English Yeomanry Cavalry within the later Georgian period. In so doing, this sword illustrates equally well the melding of both neo-classical and 18th century decorative themes which characterised the presentation swords supplied by the most fashionable London sword cutlers of the day.

The absence of any cutlers’ signature in this instance is not unusual, despite the high quality of the design and workmanship. Notably however, the hilt and scabbard include features directly influenced by the works of prominent London cutlers and sword makers. The pair of Roman fasces which form the quillons, the very distinctive fan-like langets or écussons beneath them, together with the matching fluted bands which carry the rings suspending the scabbard are, for example, all found constructed with striking similarity on a presentation sword by the royal sword cutler John Prosser. This sword was presented to Captain Abbott by the Attorneys Volunteer Cavalry (Dublin), circa 1796-98. Another comparable use of Roman fasces and the other smaller neo-classical trophies used to great effect in this period is found on a sword made by Henry Tatham in 1799, specifically for the H.R.H. Prince Regent and subsequently given by him to Lord Yarmouth; this superbly tasteful sword is now in the Victoria and Albert Museum, London (Reg. No. M.26-1952).

Other than these two distinctive examples and the further known neo-classical works by the celebrated royal sword cutlers John Prosser (1) and Henry Tatham, without contradiction the most recognisable Georgian neo-classical hilts to include the fasces motif (the principal emblem of power and rank) comes in the form of those swords of variously £100, £50 and £30 value made for presentation by the Patriotic Fund inaugurated by Lloyd’s in 1803. In the following year the Lloyd’s Patriotic Fund commissioned Richard Teed to make the swords, who is recorded as a Jeweller and Swordmaker of 3 Lancaster Court, off the Strand, Westminster (active in London 1784-1816). In addition to the motifs present on Teed’s Lloyds hilts which have common ground with the hilt of the present sword, the scabbards of his £100 and £50 swords include an oval plaque of Hercules slaying the Nemean Lion and another of him slaying the Lernaean Hydra: plaques identical to these are inset respectively on each side of the present sword hilt. Despite the further instance of plaques of this same design existing on another presentation sword of the period (unsigned also, for an infantry officer), it seems improbable that the present unidentified maker would have obtained these plaques as commonly traded workshop stock, and this must give strength to the suggestion that the maker of the present sword will have had some degree of working relationship with Richard Teed.