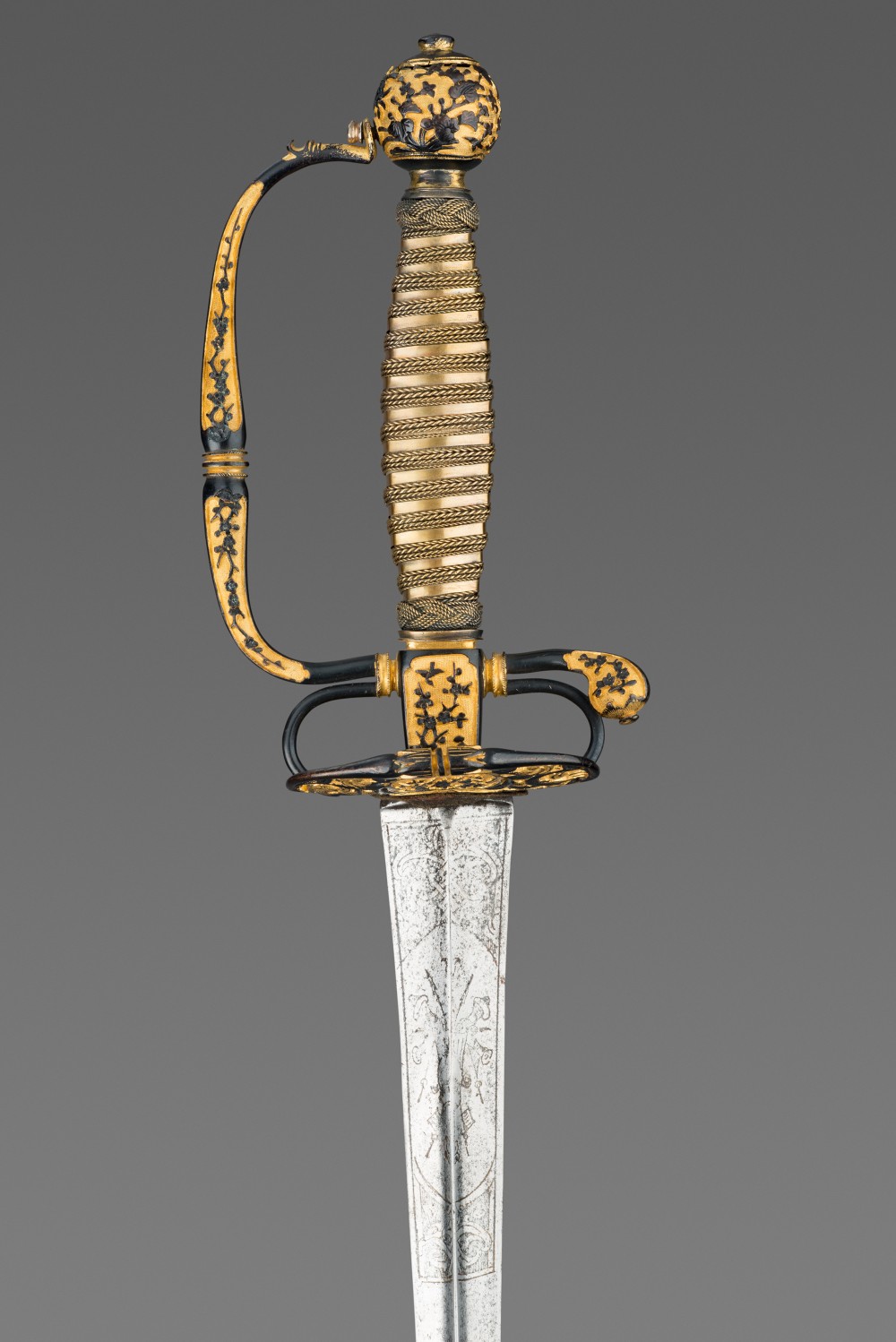 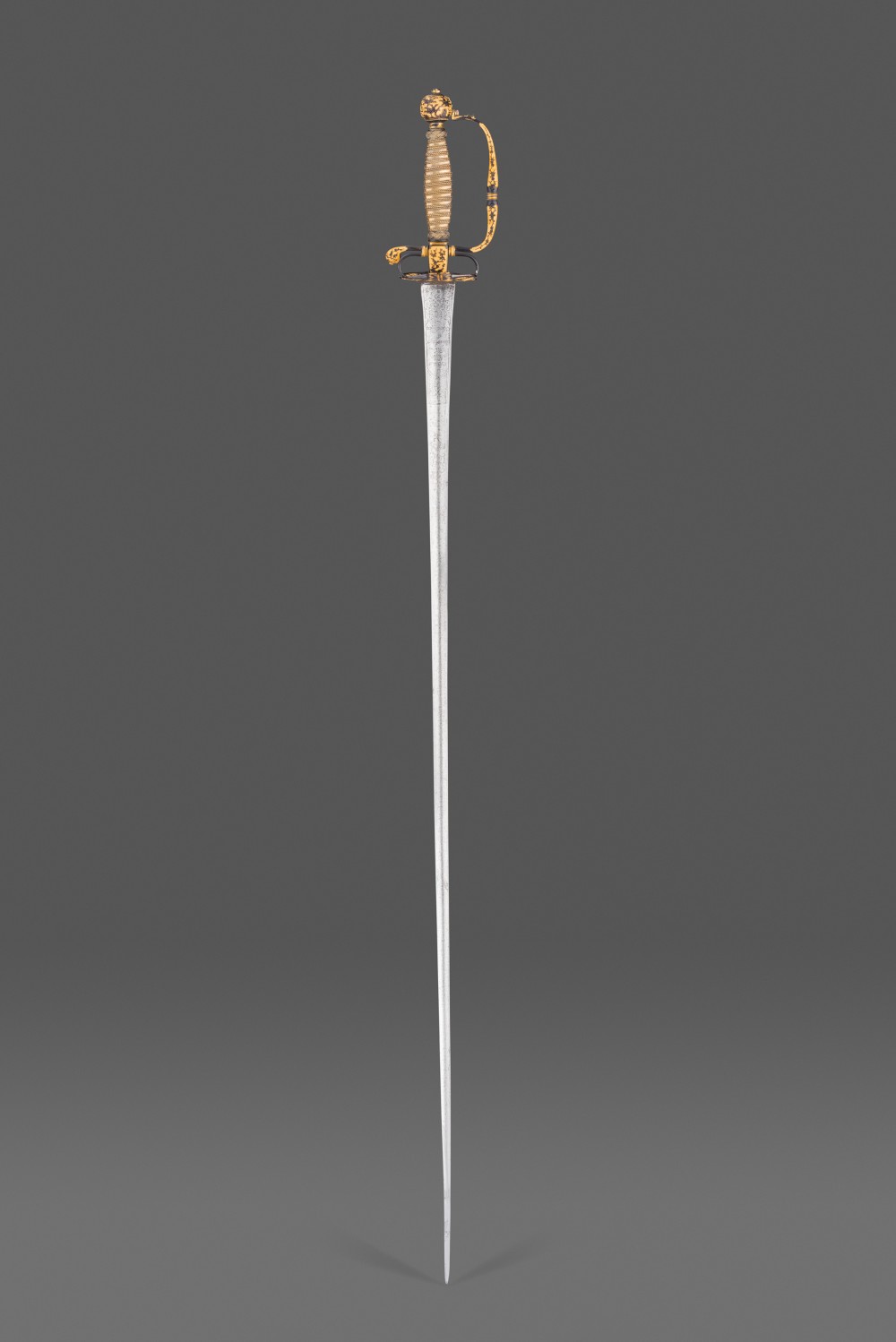 Under the specific sanction of the ruling Tokugawa Shogunate the Dutch remained the sole westerners permitted to trade with Japan after the closure policy of 1638. By 1641 the Dutch East India Company (the VOC: Vereenigde Oostindische Companie) had established its factory for the production of exotic and luxurious export goods on the former Portuguese island of Dejima, in Nagasaki harbour. Under the direction of a succession of Dutch chief trading agents (Opperhoofden) the trading centre outlived the bankruptcy of the VOC in 1799, and continued until 1860.
Sword hilts and cutlery handles were a speciality of the Dejima factory and were uniformly characterised by the use of the Japanese metal alloy sawasa, and decorated in the manner of Japanese shakudo ware. During the 18th century the areas of Dutch sawasa ware production expanded throughout the Dutch Far East, and by the end of the century sawasa production was thriving in Tonkin (present-day Vietnam), Batavia (present-day Jakarta on the island of Java), and Canton in China, as well as in Japan itself. The earliest recorded sawasa sword hilt is that of a hanger presented to Johann van Leenen (1643-1721) in 1700 by the Dutch East India Company (Rijksmuseum, Amsterdam, No. NG-1978-99). Another sword of a similar type hilted in this manner is listed in the inventory of the Dresden Electoral Armouries in 1728, having said to have entered the armouries in 1704: see Nickel, Pyhrr and Tarassuk 1982, cat. no. 60.
The alloy was composed primarily of copper, with the addition of small quantities of silver, gold and arsenic. The resulting material lent itself not only to the casting of small objects but also to their fine decoration through chiselling and chasing. The relief patterns used to decorate the surfaces were made the more exotic by the attractive blue/black gloss of their lacquer, highlighted against brilliant gilding, a technique unique to Japan and highly fashionable in continental Europe throughout the 18th century. The term sawasa is Dutch/Japanese, derived from the Japanese verb sawasu, which literally translates as: ‘applying a thin coat of black lacquer in order to prevent the surface from becoming shiny’. The initial resemblance of this surface to that of Japanese shakudo ware has led to the misidentification of sawasa for many years.

The blade with which the present hilt was mounted for its sale in the Netherlands, entirely typically makes no pretence of an eastern origin. The blade is etched with the cutler’s signature ‘JEAN HOSSE MR ZWAARTWEGER A AMSTERDAM’; another example of a sawasa hilt with the blade also signed by the master sword cutler Jean (Jan) Hosse is preserved in the Victoria and Albert Museum, London (1736-1888): see North 1982, p.30, no. 61. Hosse is recorded as working in Amsterdam within the period 1731-68.
The underlying European style of the present hilt embodies a number of features which on the whole pre-date the working life of the blade cutler. Given that the present hilt was made within a Dutch colonial workshop very distant from the movements in European fashion, it seems entirely reasonable to accept that the hilt would be markedly conservative in taste by the time it was mounted with the blade shortly after 1730.