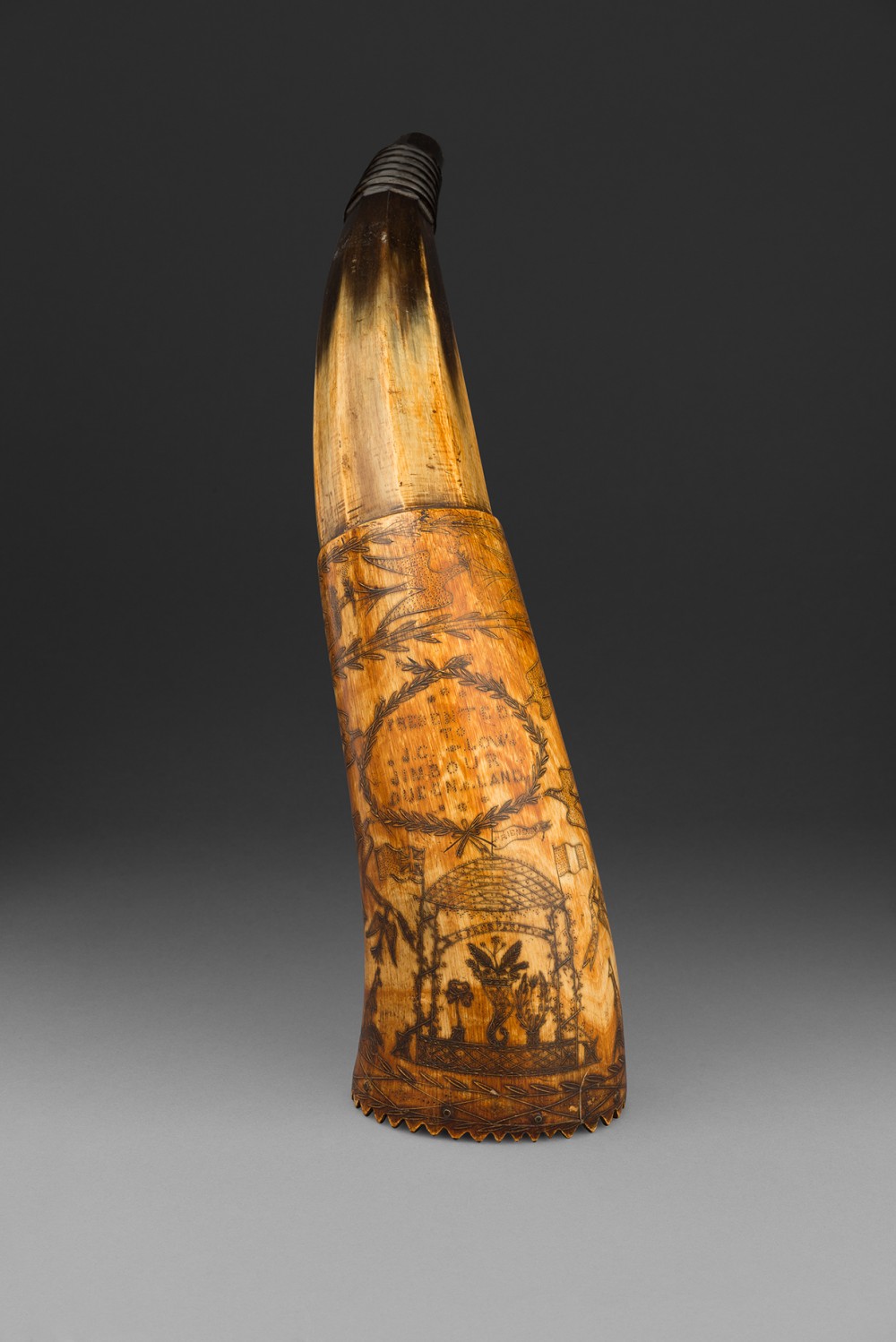 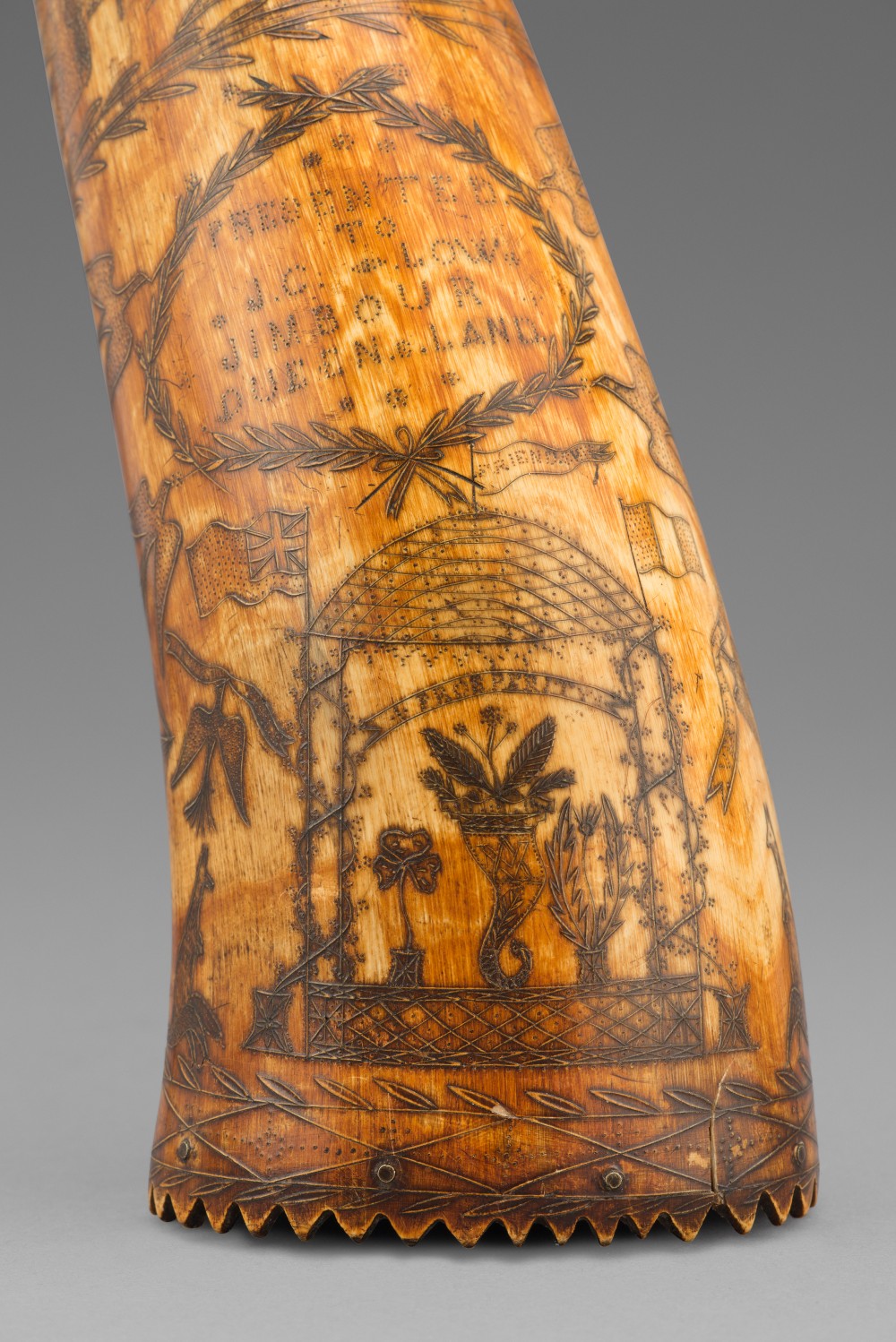 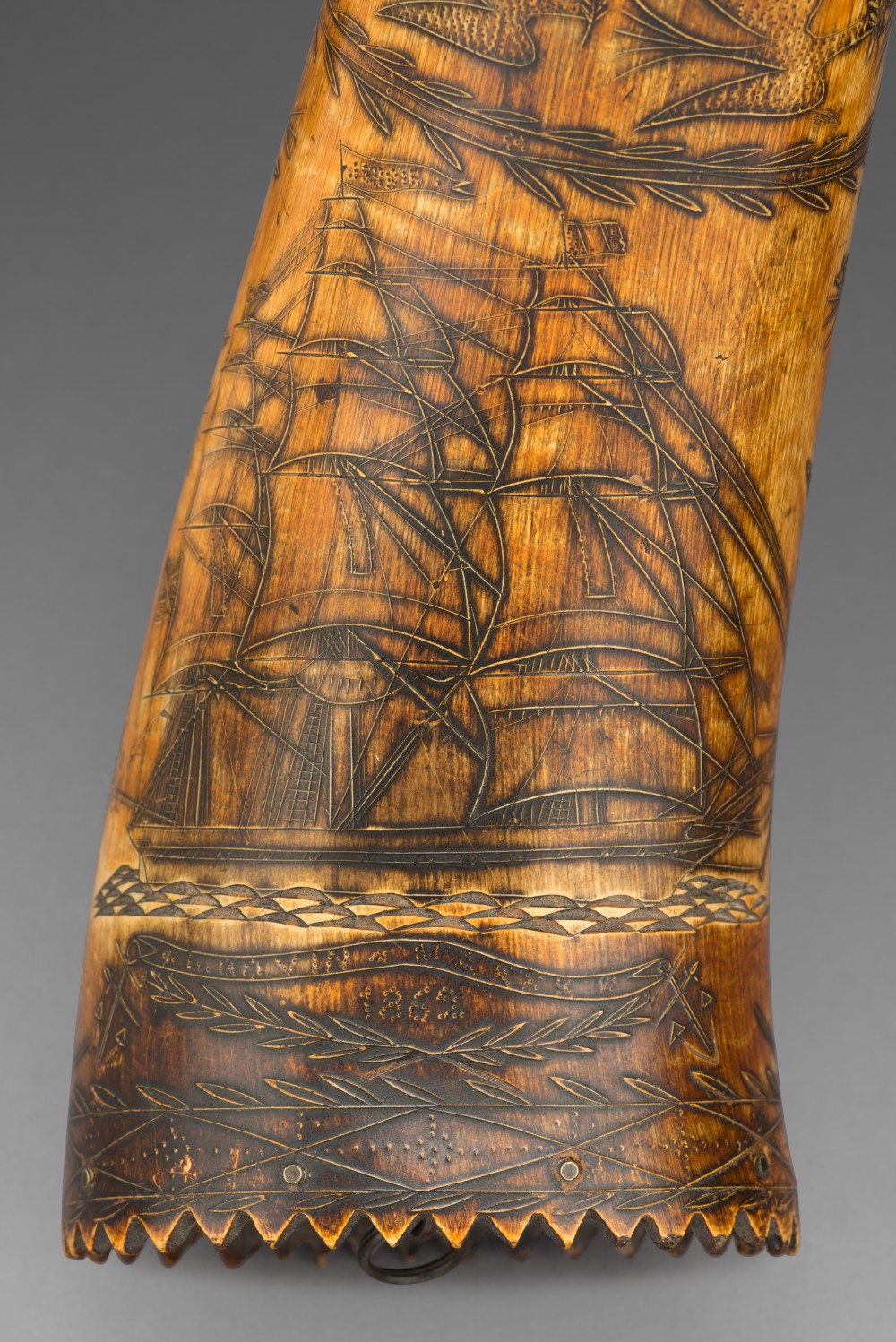 The maker’s signature CORVIN MAKER and above the date 1862, PROSPERITY and FRIENDSHIP above. Surmounting these, a laurel garland encloses the inscription PRESENTED TO J.C LOW JIMBOUR QUEENSLAND, and VERITE ET FIDELITE and UNION.

The named recipient of this powderhorn, J.C. Low, was a civil engineer who played a key role in the vital agricultural development of eastern Queensland, the fruit of his works a significant contribution to the golden age of the ‘Shepherd Kings and Grass Dukes’. The presentation inscription engraved on this horn also confirms Low’s involvement with the prominent Jimbour sheep station in the Darling Downs district, inland from Brisbane. Today, Jimbour is a superb heritage–listed homestead and remains a demonstration of the wealth and ambition of the early Queensland pastoralists.

Jimbour station comprised 311,000 acres when it was established in 1844. The property changed hands in rapid succession, being acquired by the Bell family, immigrants from Ireland. In 1848 Joshua Peter Bell (1827-81) became manager of Jimbour and with his father and brother took over the lease. Ultimately Joshua Bell assumed sole control of the station as a result of his astute management; he went on to achieve considerable wealth and greatness in Queensland politics.

Hindered by an erratic annual water supply for the grazing land, the tenants and landowners of Darling Downs moved to rectify the position by means of an extensive project of dams, reservoirs and watercourses. A brief account of this significant program of land improvement was published in the Sydney Morning Herald on 10 November, 1862. The report describes the recently completed works and states that the most extensive of the dammed reservoirs was at Jimbour creek, with an estimated capacity of 800,000,000 gallons. The newspaper report goes on to specify that the entire project was superintended by a civil engineer named J.C. Low.

The importance of this irrigation project to the region as a whole cannot be understated, and J.C. Low doubtless incurred respect and gratitude among the wider community of land owners and tenants in the Darling Downs district. We do not know for certain who presented this horn to Low, it may well however have been its maker, who has signed himself very simply ‘CORVIN MAKER’. The sentiments expressed on the small banners amid the engraved designs clearly show a heartfelt regard for Mr Low. The thistle and shamrock emblems presumably allude to Low’s heritage as a recent immigrant, and the ship Brisbane naturally underscores this.