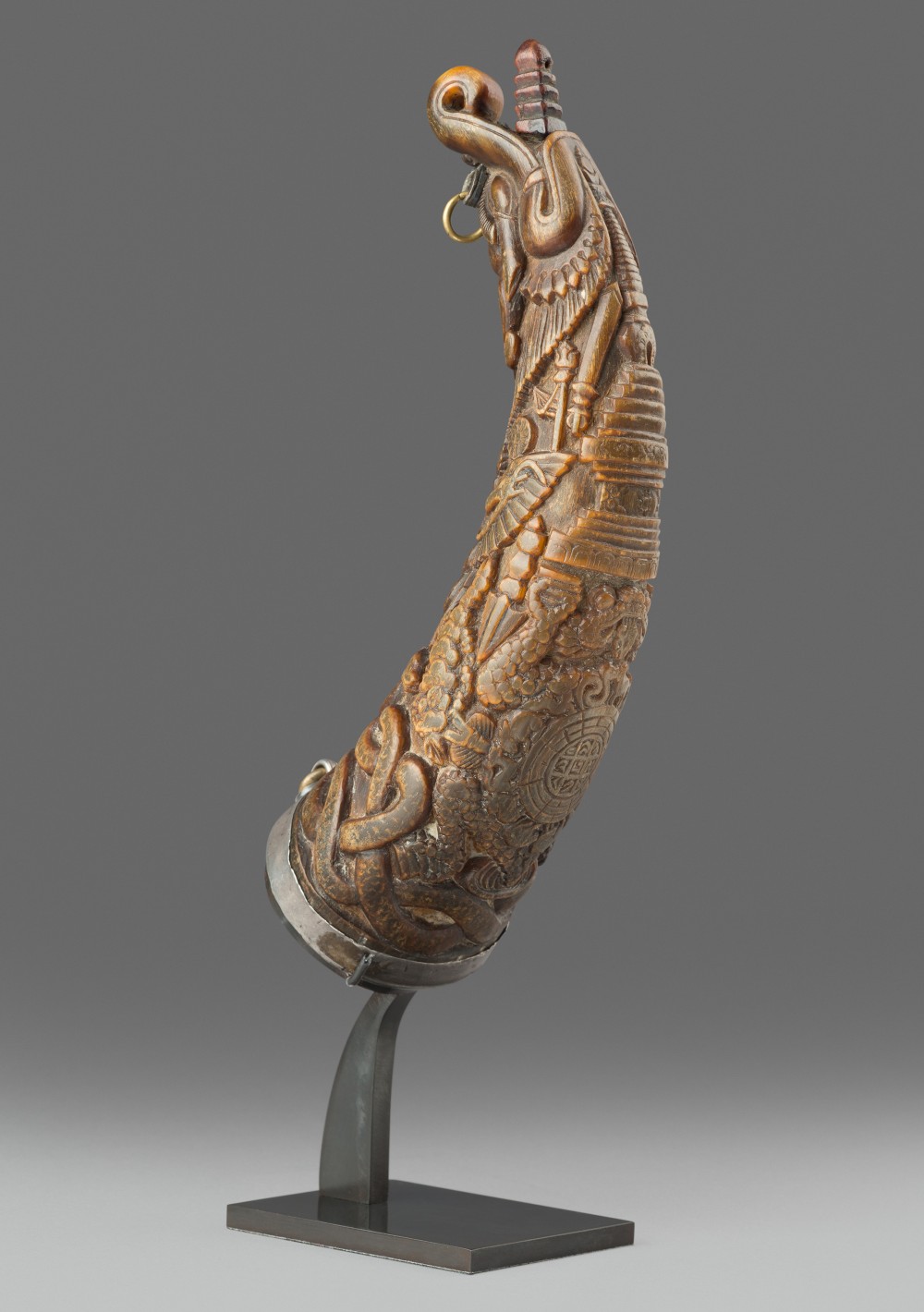 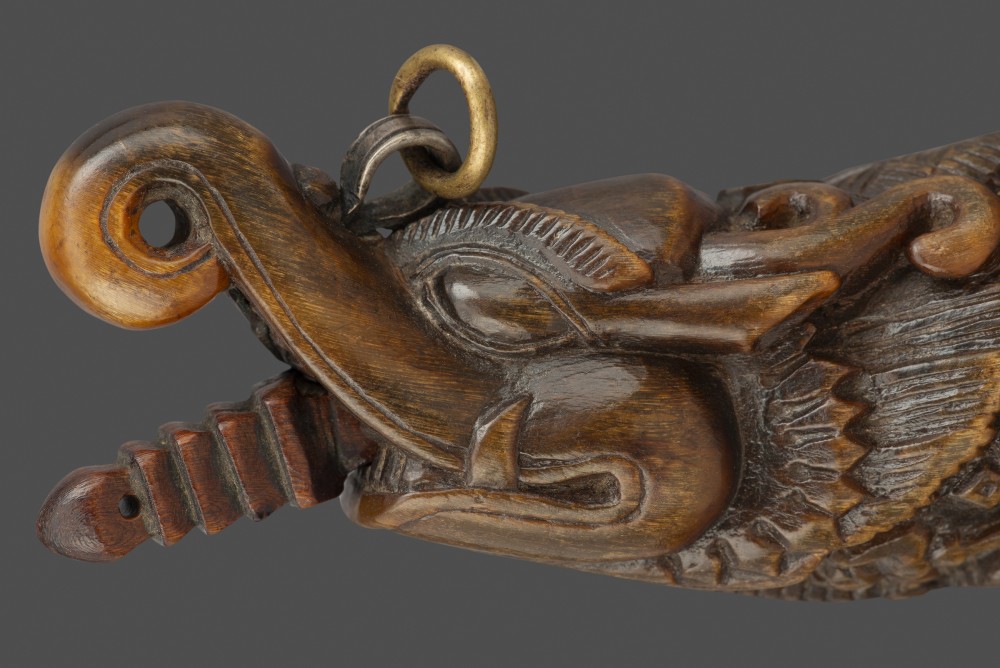 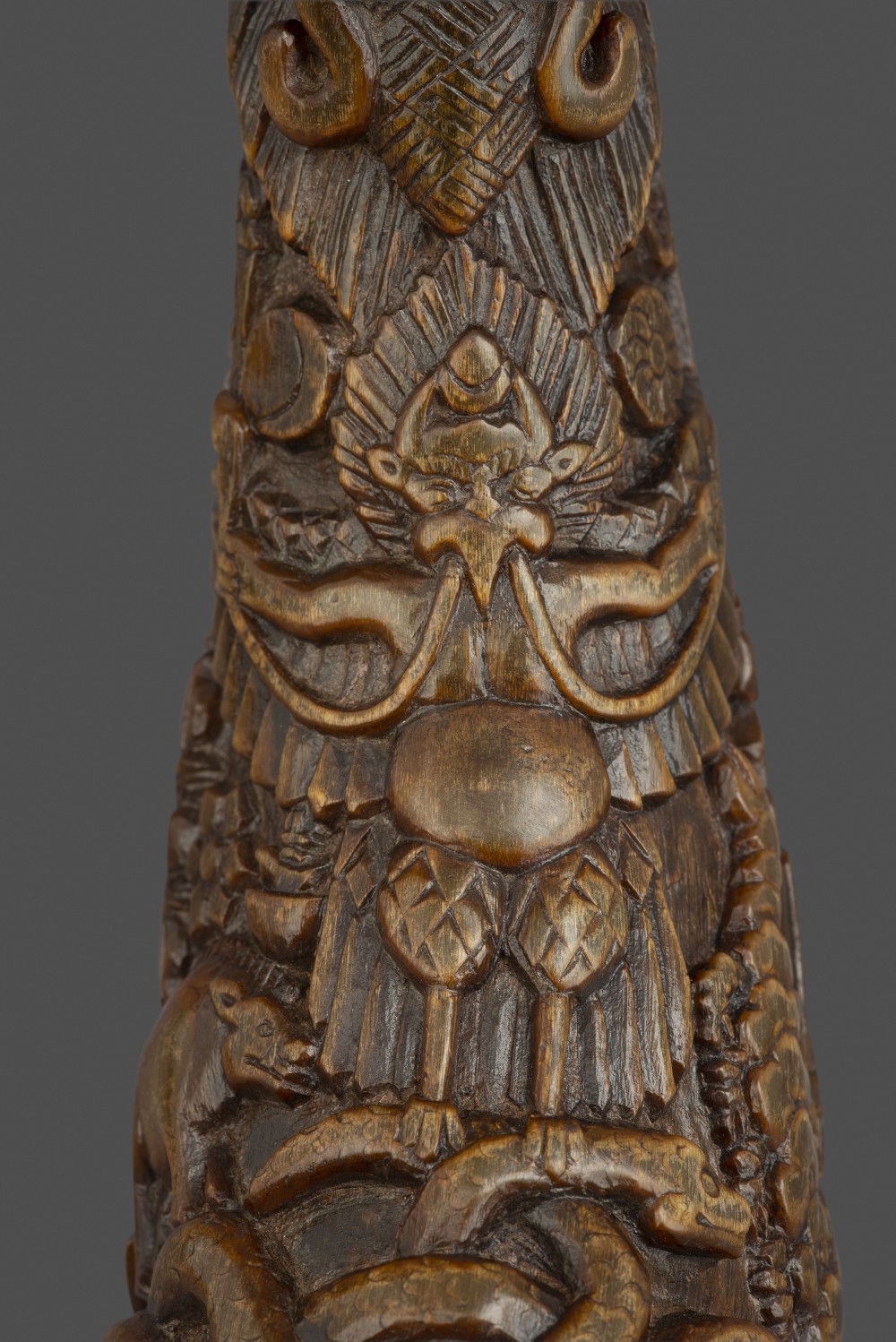 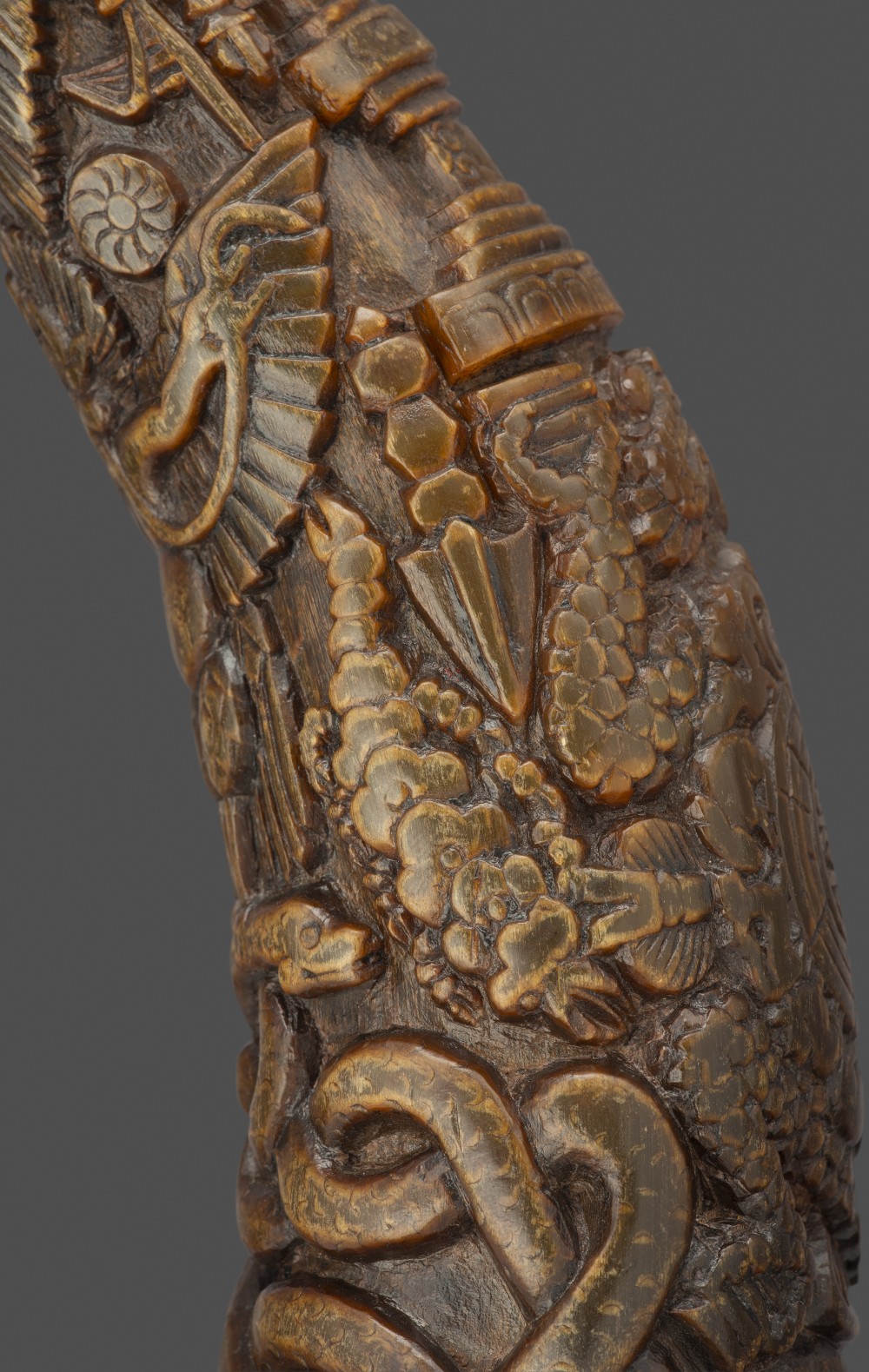 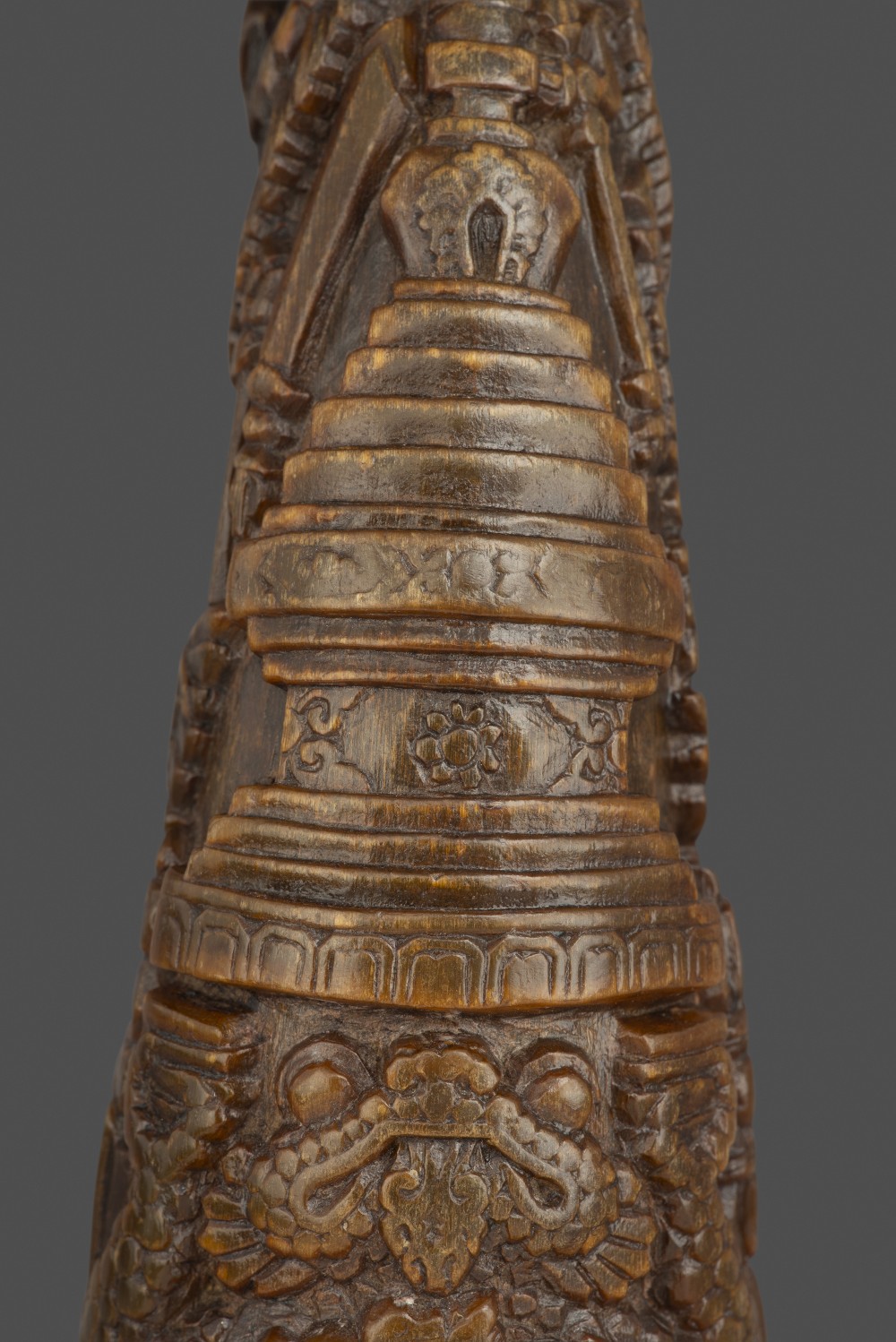 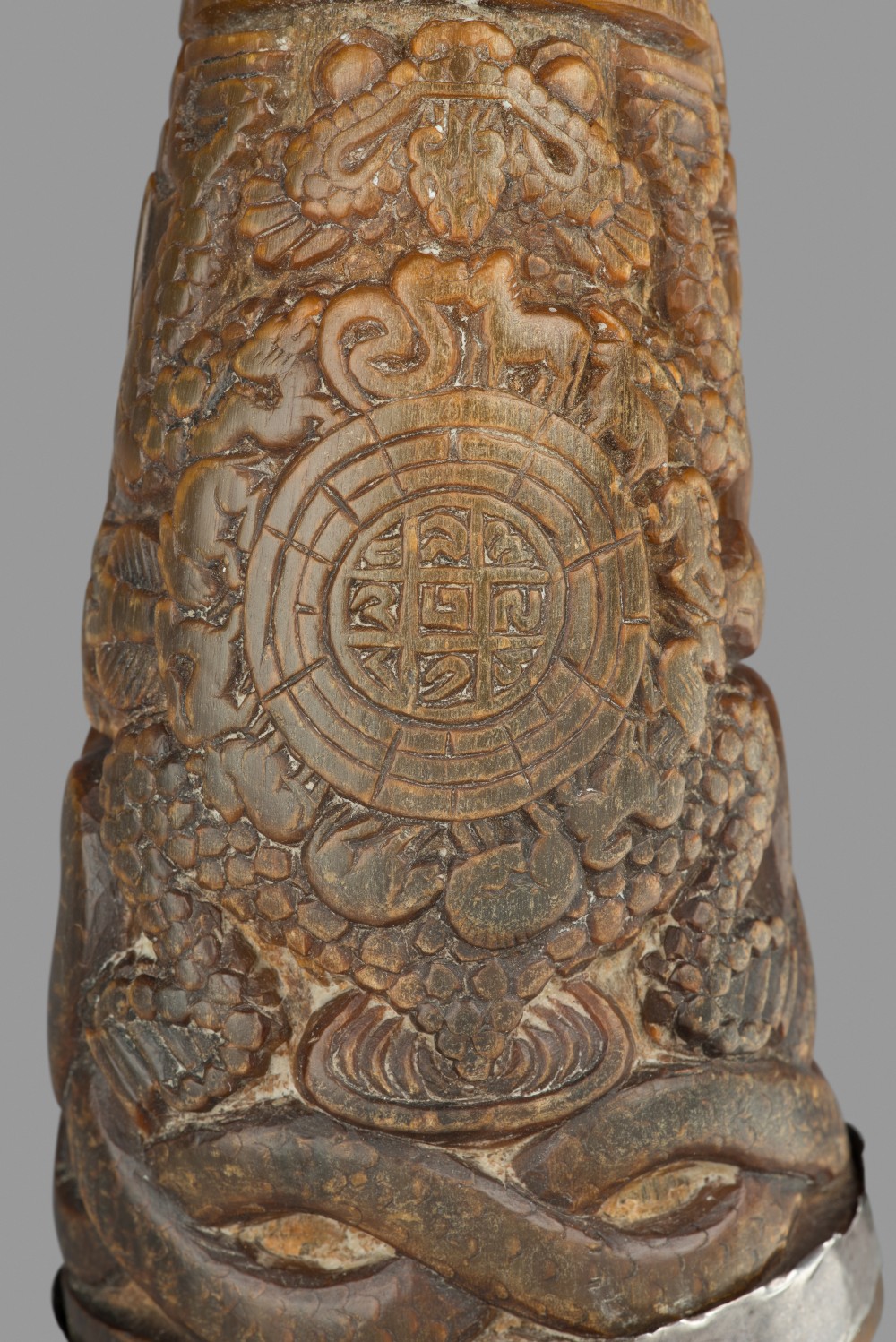 From the Collection of Dr Gordon, purchased from Spink and Son in September, 1994

Carved horns of this type were used to dispense seeds during Tibetan monastic fire-offering rituals. The horn was used to hold mustard seeds which were shaken into the fire as part of the purifying ritual of the Spying Ghosts. The fire was typically retained within a triangular brazier, while cleansing and exorcising mantras were recited.

The sacred iconography represented in the carving of this flask shares the traditions of the Mahayana Buddhism of Tibet and China and the Hinduism of neighbouring India. This sharing of symbolic motifs comes quite understandably from the more ancient Indian Mahayana rites, which over time became infused into those of Tibet as a natural consequence of their proximity. The nozzle is carved in the round as a striking representation of the mythical water monster chu- srin, or makara, a hybrid water monster from Hindu mythology. In Tibetan iconography the makara is depicted within the Vajrayana weaponry of Strength and Tenacity. Behind the nozzle the figure of the bird- god Garuda, surrounded by a series of Buddhist sacred symbols, including a Tibetan votive stupa enclosed by a Vajrayana sword, a dagger and a sceptre with trident-head, the ‘Fungus of Immortality,’ and a Zodiacal Boar. Garuda is sacred as a dharma protector and as an Astasena, a non-human super being. A turtle-like creature’s shell is carved in the form of a divine trigram or cosmic diagram encircling frieze of animals, which are perhaps the animals of the Chinese zodiac. The basal portion of the body is carved with a complex encircling of entwined serpents.