A Cased Pair of Percussion Pistols Presented to the Duke of Valencia, by Eusebio Zuloaga, dated 1847 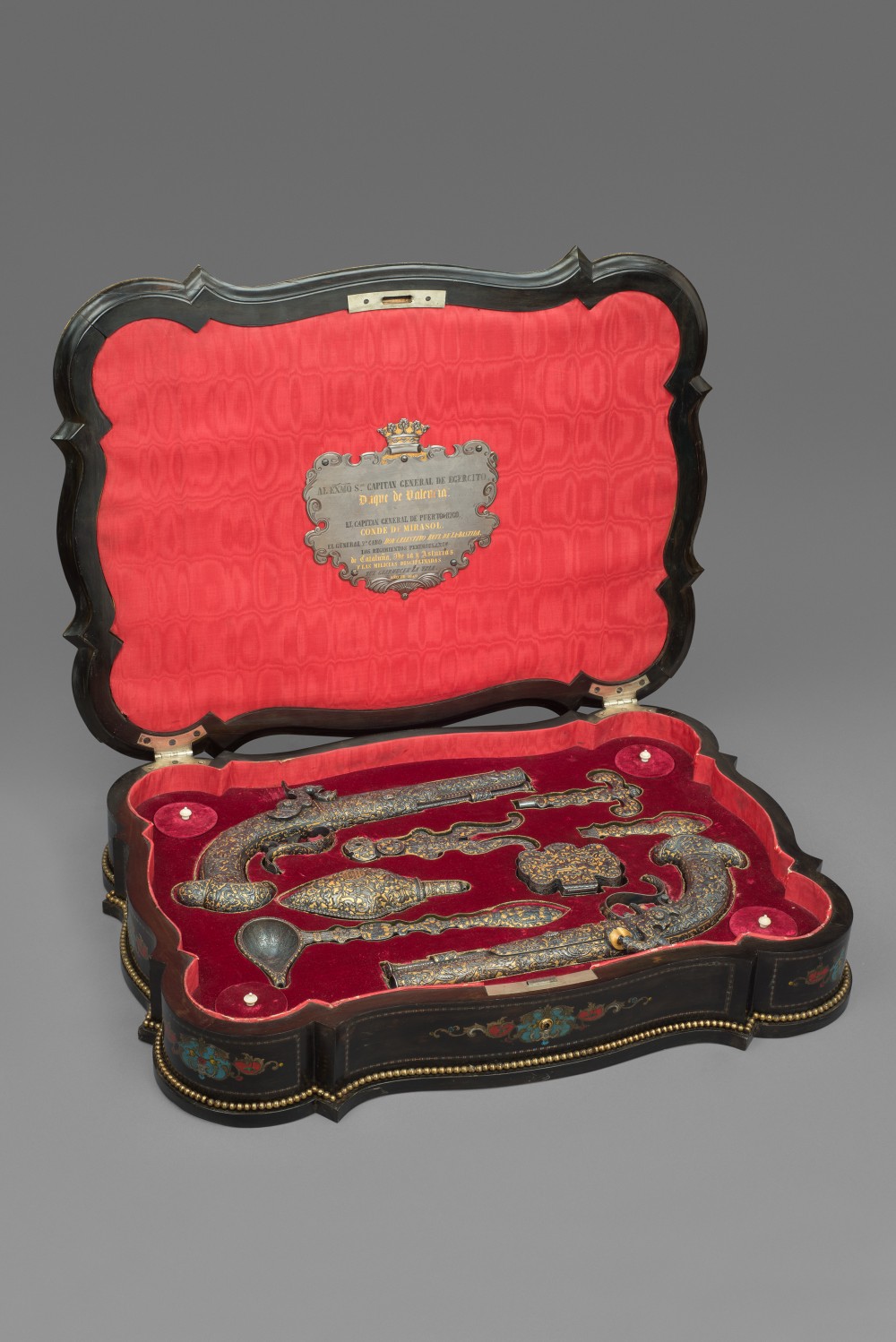 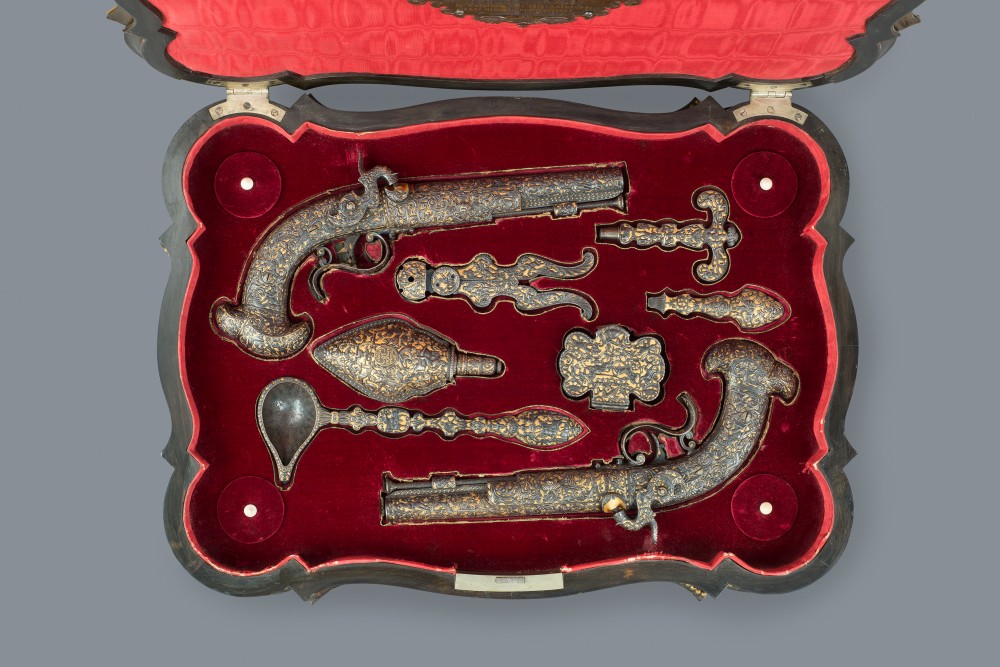 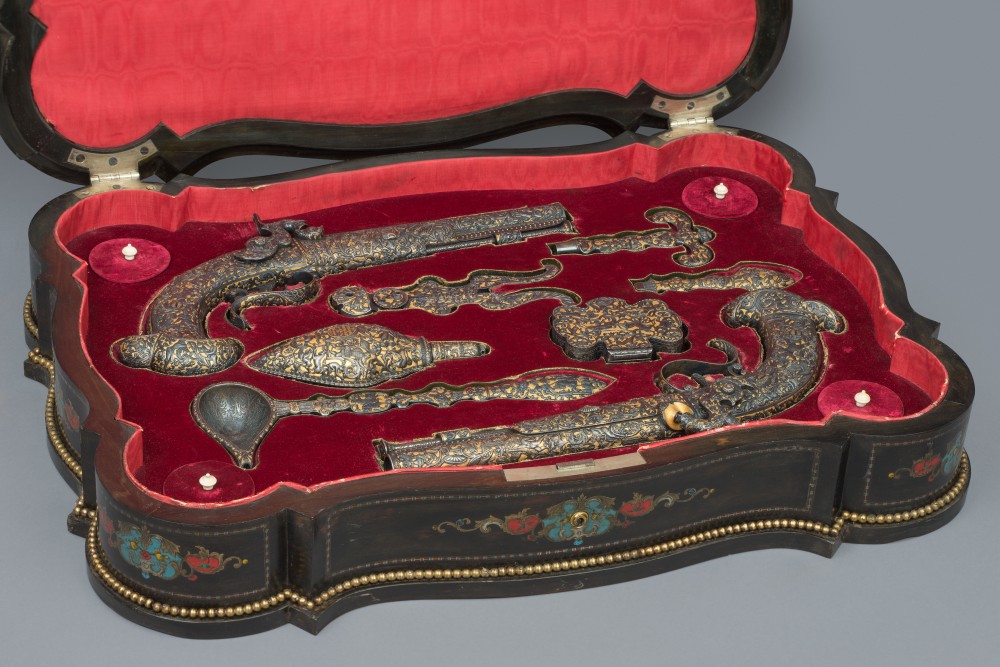 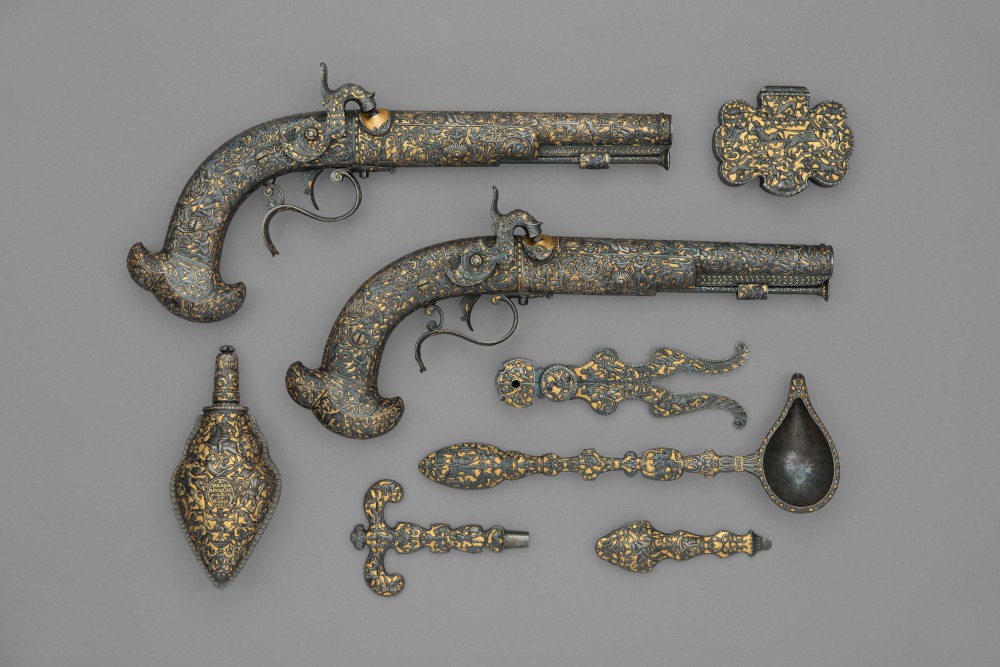 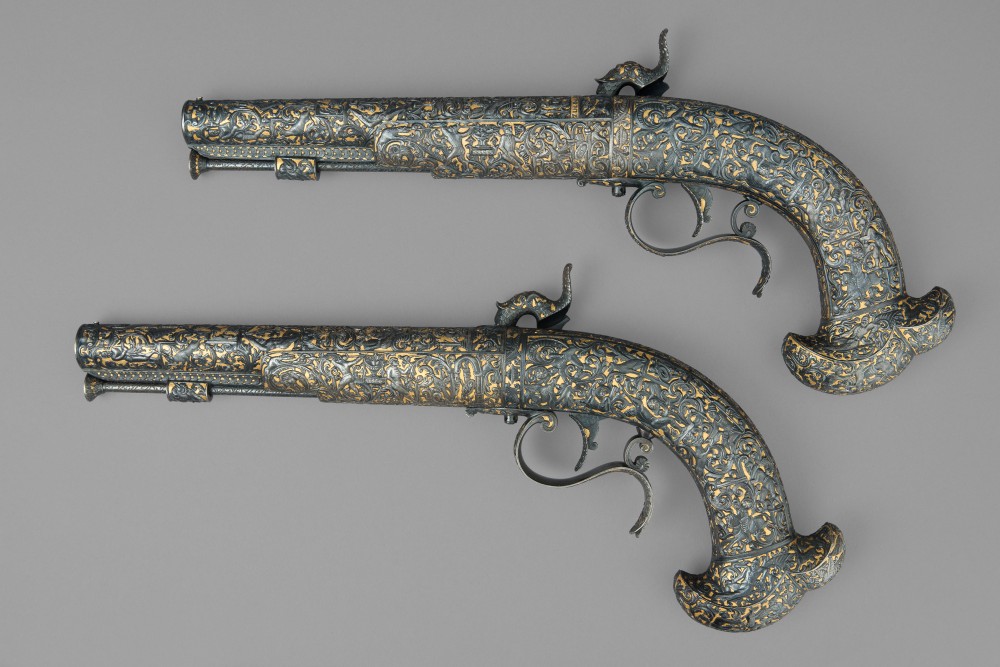 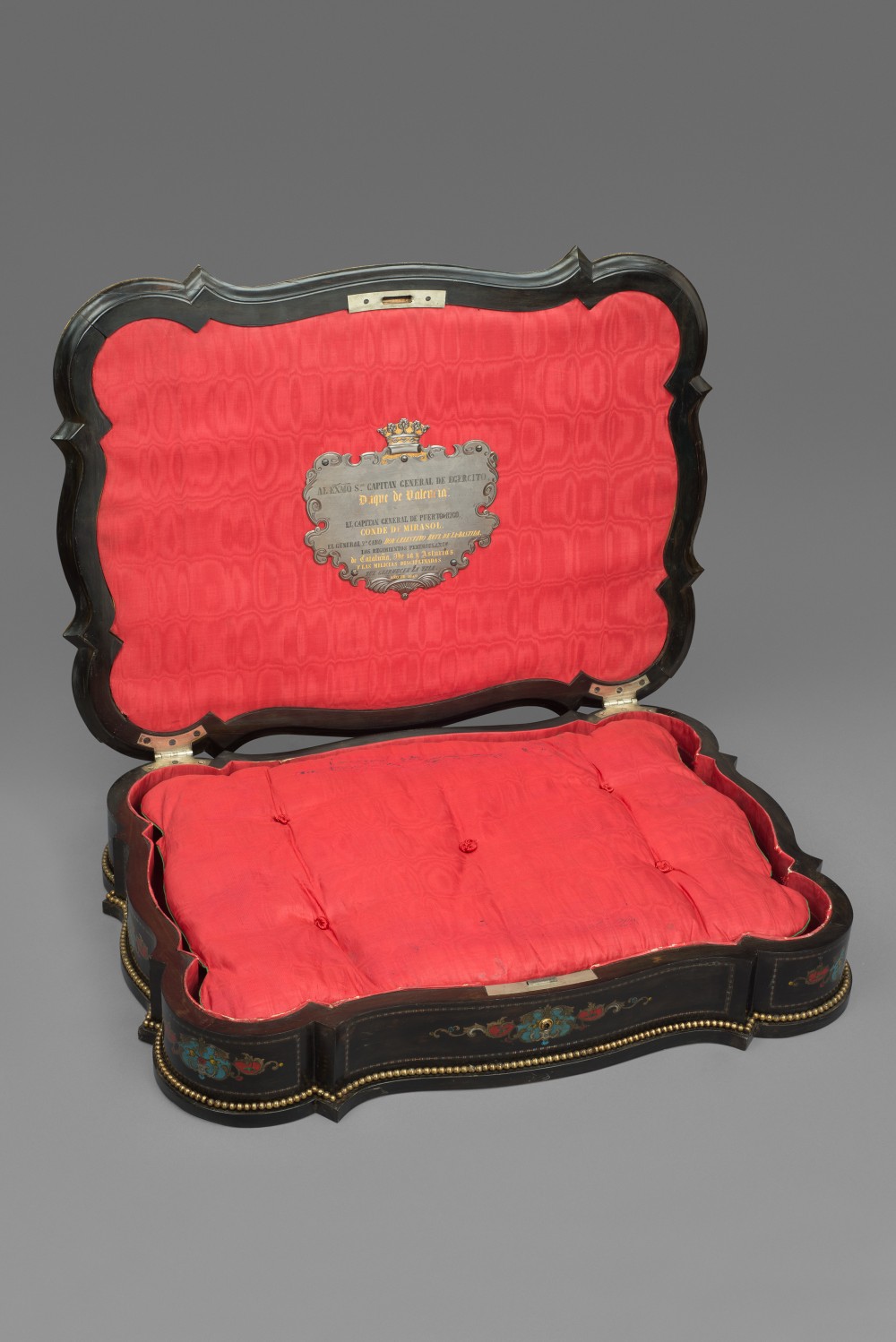 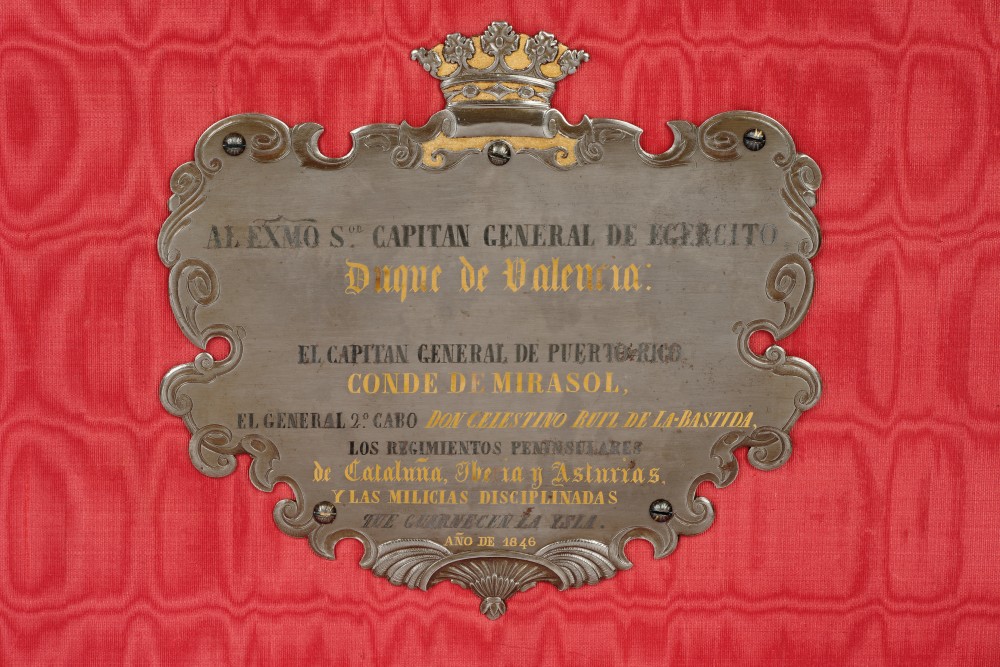 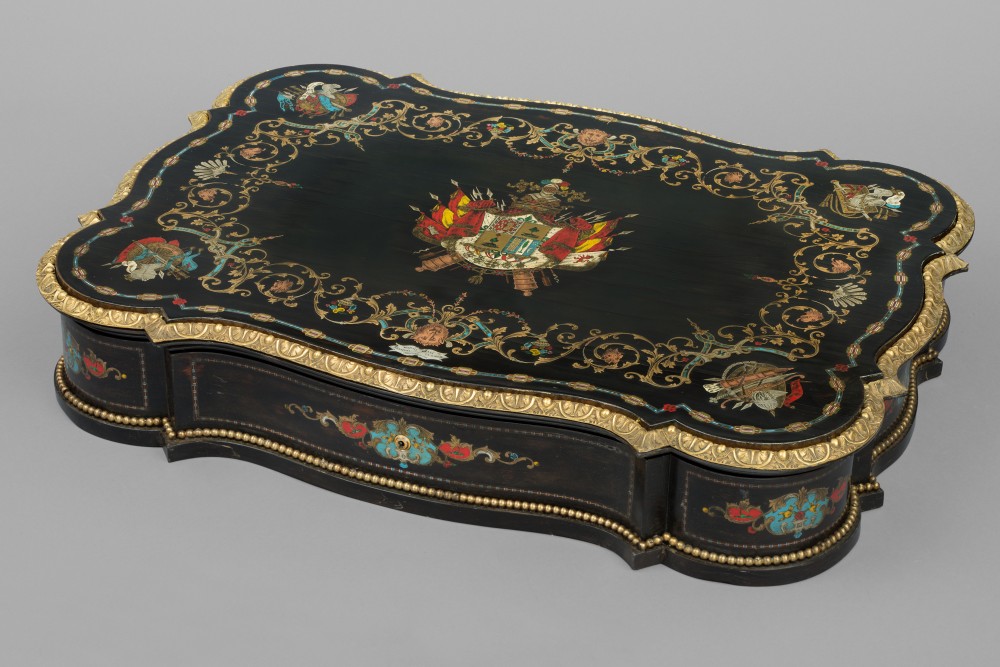 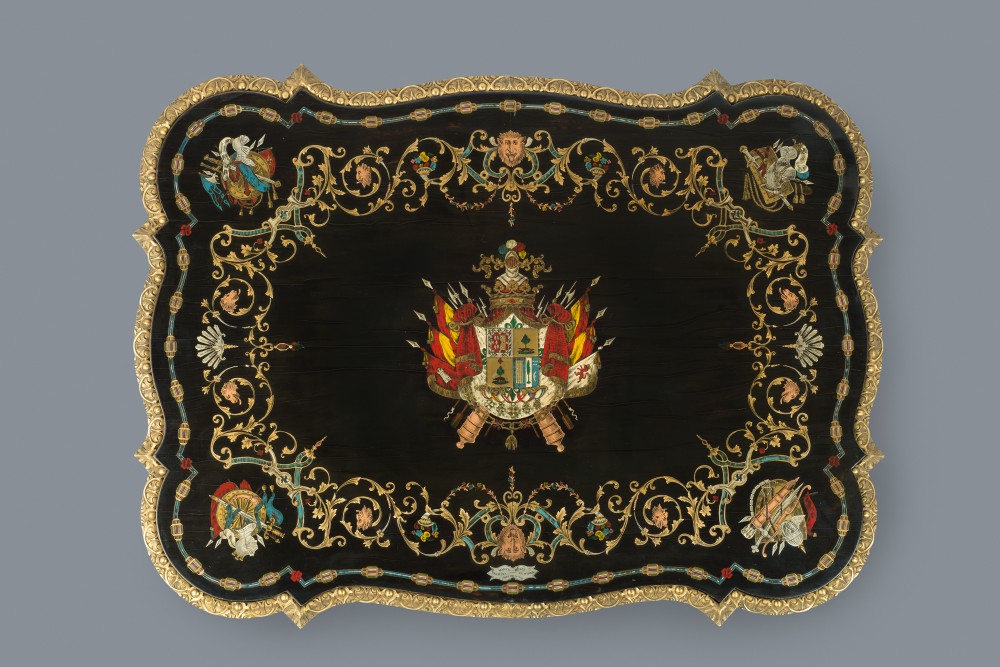 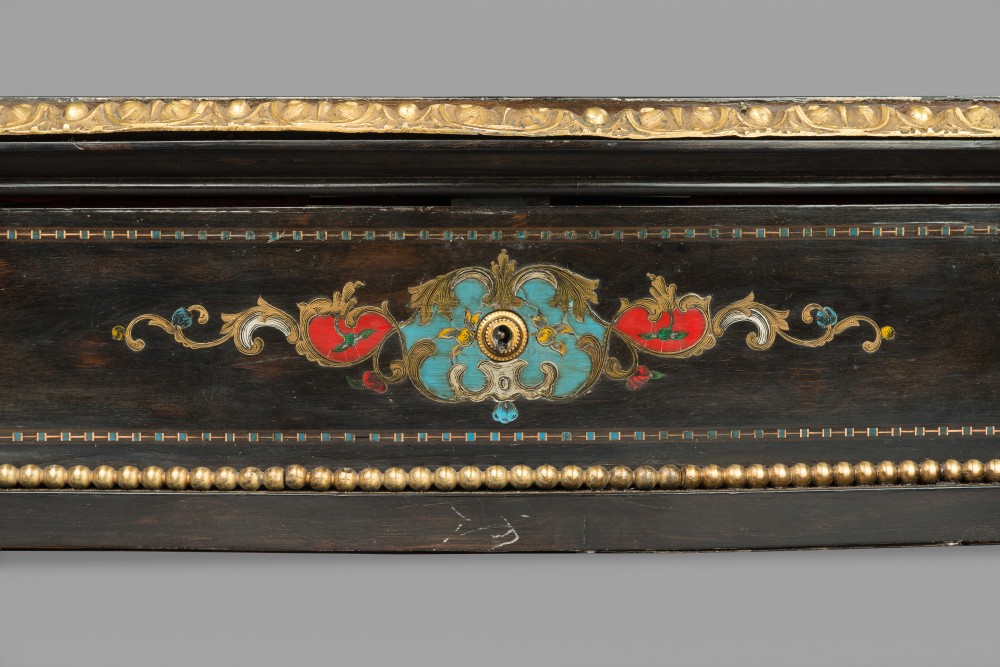 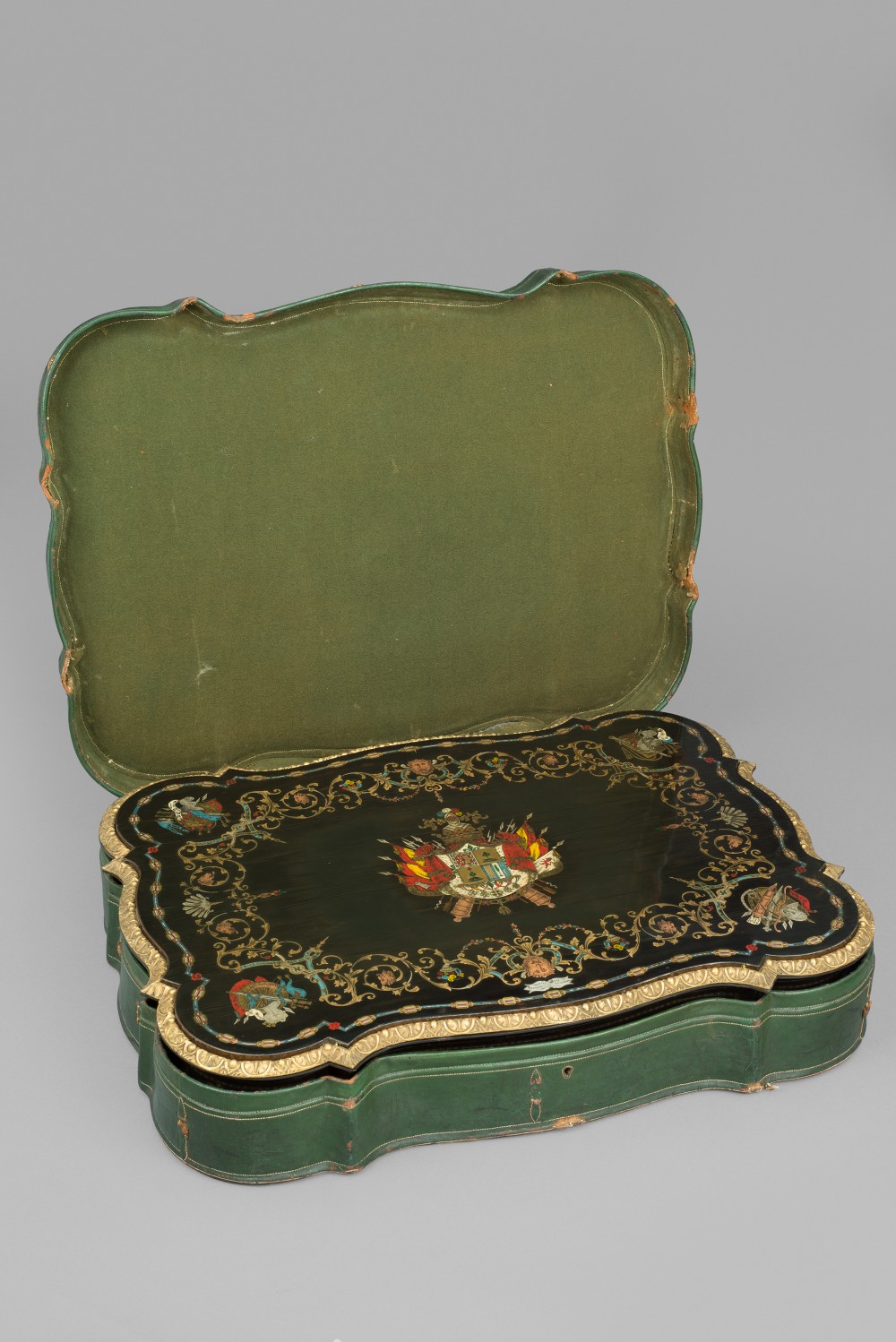 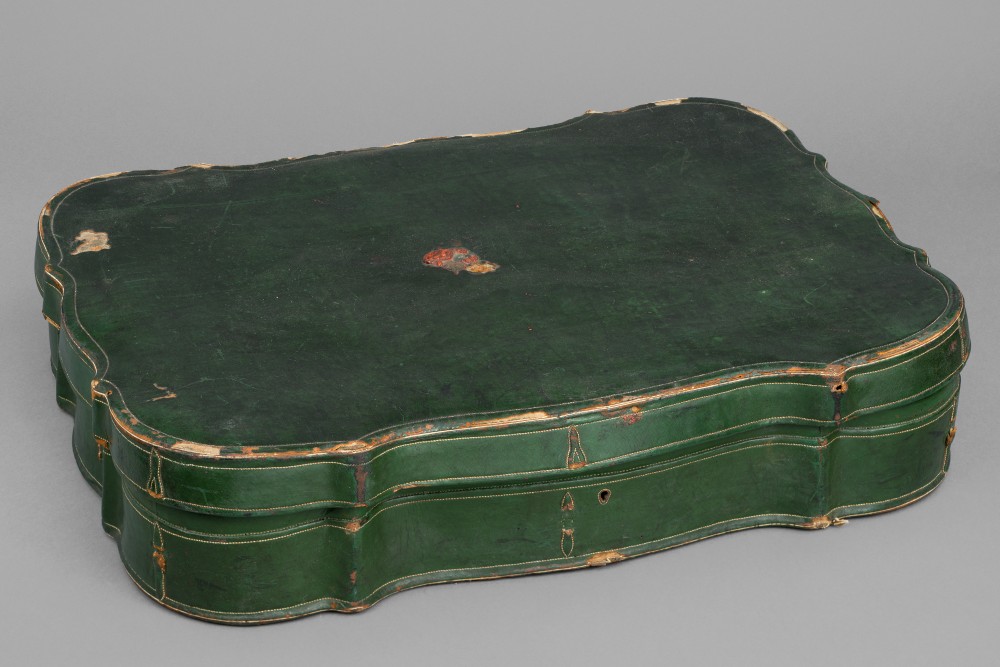 Illustrated:
Sir Matthew Digby-Wyatt,  The Industrial Arts Of The Nineteenth Century, A Series Of Illustrations Of The Choicest Specimens Produced By Every Nation At The Great Exhibition Of Works Of Industry, 1851. Published by Day And Son, London 1853

Literature:
Mathew Digby Wyatt, The Industrial Arts of the XIX Century. A series of illustrations of the choicest specimens produced by every nation, at the Great Exhibition of Works of Industry, 1851, published in two volumes 1851-53. One of the present pair of pistols forms part of a coloured lithograph, pl. 11, vol. 1
James D. Lavin, ‘The Zuloaga Armoures’, Journal  of the Arms & Armour Society,Vol. XII, No.2 ( September 1986), pp.84-87, 91, pl. XXII
James D. Lavin, ‘The Zuloagas of Eibar’, an essay in the exhibition catalogue (ed. JD Lavin), The Art and Tradition of the Zuloagas – Spanish Damascene from the Khalili Collection, The Khalili Family Trust in association with the Victoria and Albert Museum, London 1997, pp.41-66
A coloured lithograph from the Great Exhibition of 1851 reproduced as fig. 4, P.47
An original design for one pistol of this pair is in the Museo Zuloaga, Zumaia, Gipukkoa, reproduced as fig. 9, p.2

The recipient of this astonishing cased set of pistols was unquestionably as unique as these pistols themselves: on his deathbed he was asked to forgive his enemies, to which he replied “I have none, I have had them all shot”.

Ramón María de Narváez y Campos (1800-1868) was the son of José María de Narváez, 1st Count of Cañada Alta. He entered the army at an early age and first saw active service in Catalonia in 1822. His talents as an officer and his firm Conservative support of the monarchy in the face of would-be Liberal reform rewarded the younger Narváez with a succession of promotions. He became a committed supporter of the child Queen Isabella II and her regent Queen Maria Christina upon their accession in 1833, and achieved great popularity with his victory over General Miguel Gómez Damas of the Carlist opposition at the battle of Majacceite in 1836 (defeating the forces of Carlos, brother of the dead King Ferdinand VII and pretender to the Spanish throne). Narváez cleared La Mancha of brigands in 1838, employing a policy of hard repression, and for his achievement he was appointed Captain General of Old Castile and commander-in-chief of the army reserves. On the conclusion of the Carlist War Maria Christina had been compelled to relinquish her regency to Baldomero Espartero, Count of Luchana. Narváez, for his role in the putting down of the Carlist insurrection was forced to take refuge in France, where with Maria Christina and General O’Donnell they planned the successful overthrowing of Espartero in 1843. By their pronunnciamiento the Cortez (parliament) was obliged also to accept the legitimacy of the 13-years old Isabella as queen.

On May 3rd 1844 General Narváez was appointed Spanish Prime Minister, the first of six terms he was to hold that office, the highest in Spain below the monarch. On July 1st he was also appointed Minister of Foreign Affairs, and on November 18th 1845 he was promoted to field marshal and appointed 1st Duke of Valencia. Regrettably for Narváez his policies were considered too reactionary to be tolerated for any length of time, and as a consequence was compelled to leave political office in February 1846. In place of his ministerial rank Narváez was appointed Ambassador to Paris, but was reinstated to a second term as Prime Minister and Minister of Foreign affairs in March 1846, but for one month only. Further ministerial re-appointments followed over the remaining course of his political life and Narváez was again serving as Prime Minister at the time of his death in 1868.

This cased set of pistols and their accessories, the latter being every part a masterpiece as the weapons themselves, was presented principally by two senior figures of the Spanish royalist establishment: these being firstly Captain General (equivalent to field marshal) Don Rafael Aristegui y Velez, The Count Mirasol and Governor of Puerto Rico (1843-47), and secondly General Don Celestino Ruiz de la Bastida. The plaque bearing the Spanish presentation inscription is set into the interior of the case lid and is surmounted by a chiselled and damascened ducal crown.

The inscription concludes with the date ‘1846’; this is almost certainly the date the set was commissioned and also the date commemorating the year in which the remarkable state service of Ramón Narváez concluded (temporarily) upon his leaving office. In the presentation the named donors were joined by the officers of those army regiments whose loyalty to the monarchy was absolute.

The powder-flask is dated ‘1847’, however, this being indicative of the length of time required for even a full team of artisans in the Zuolaga workshop to complete such an elaborate commission. In fact it is most likely that the set was not entirely completed until just prior to its presentation in about 1850, just in time for the set to be included in The Great Exhibition in London during the following year.

The densely-packed chiselled designs which predominate the present pistols and their accessories draw strongly on a revival of interest in the Mannerist fashion for grotesque scroll and strapwork. This imaginative school of ornamentation had originally been disseminated throughout Europe from the designers employed at the French Royal Court at Fontainebleau in the 16th century, and thence was taken up by the decorators of armour and luxury wares under the wider patronage of the many ruling courts of Europe. The armoured figures included in the designs of both the present pistols and their accessories are additionally influenced by Eusebio Zuloaga’s own observations; these were gained from the period circa 1846-49, in which he was working at the Royal Armoury in Madrid, restoring the magnificent armour there.

Working very much in his own signature style, Eusabio Zuloaga has clearly used the delicate and exact framework of 16th century design and then worked, or rather crammed into every possible tiny space a complexity of figures, grotesques, monsters and wit from his free imagination. All of these fantastic arrangements are thrown into a greater dimension by the accomplishment of his iron chiselling in relief, the consequential heightening being augmented by the contrasting brilliance of the gold-damascened ground.