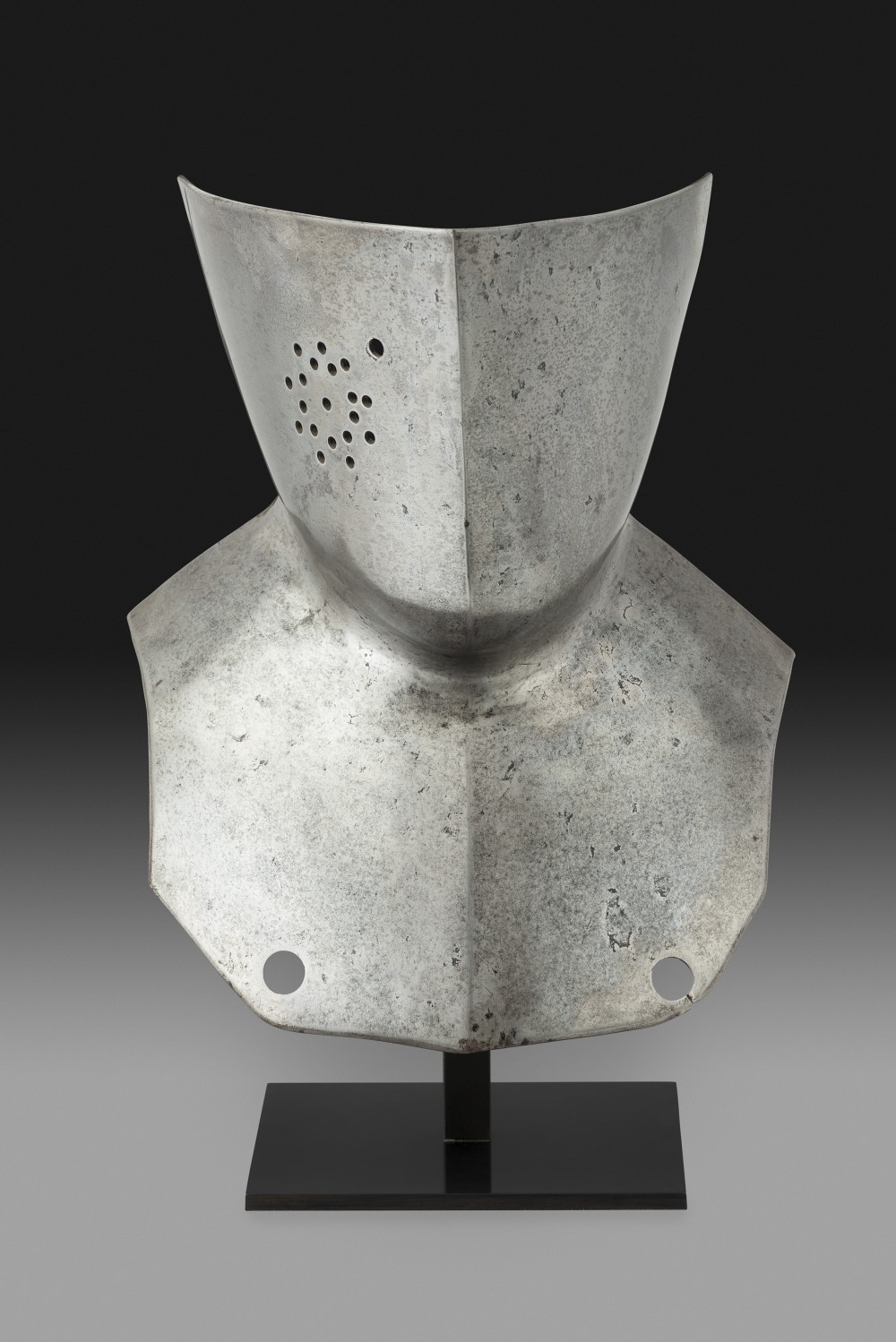 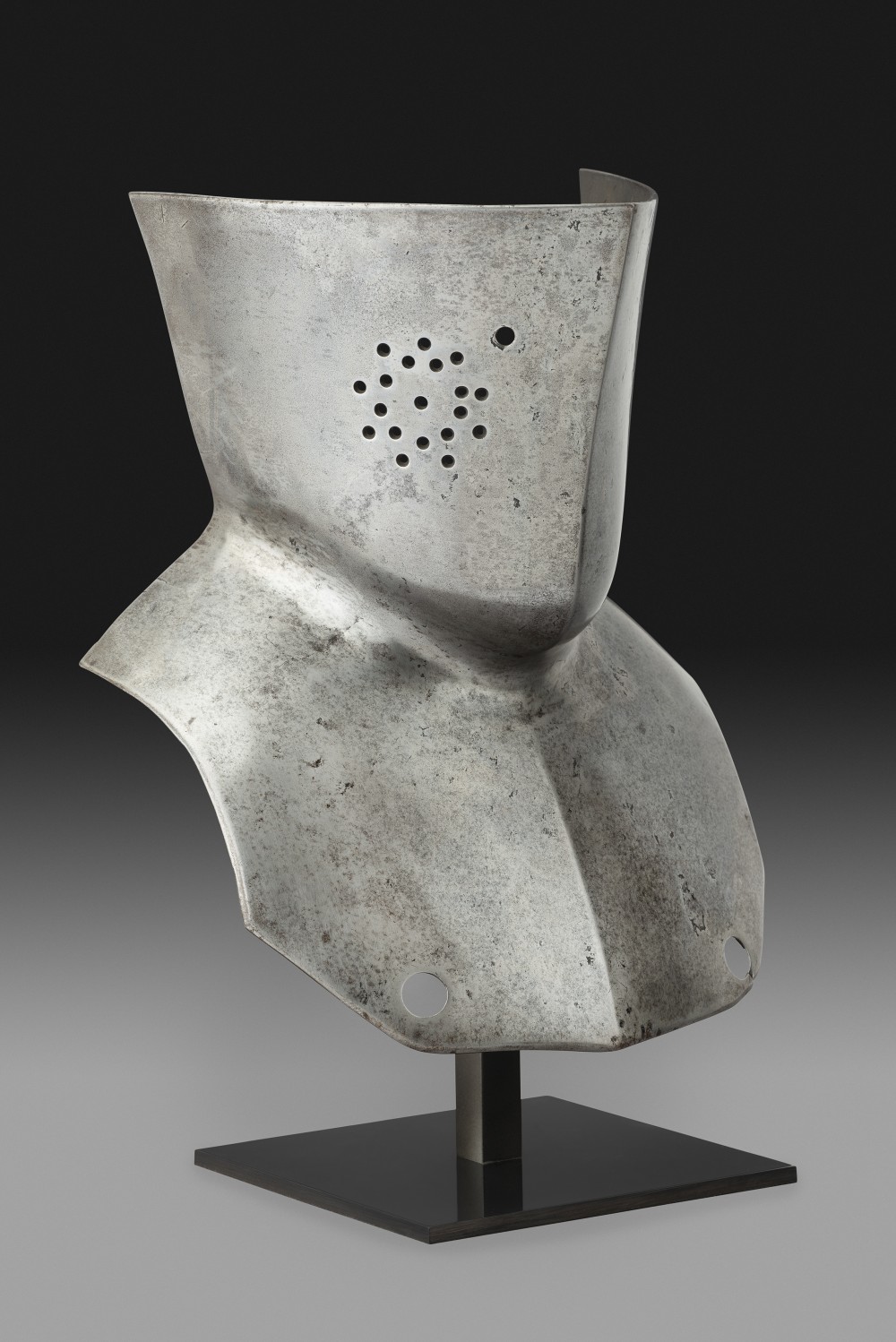 By the mid-16th century the ‘pieces of exchange’ or ‘double pieces’ making up a garniture of armour could take an intriguingly wide range of forms, in particular those elements which were designed for giving alternative or reinforced defence to the head and neck in the differing forms of the tourney. The variation in these designs was naturally determined by the specific defensive requirements dictated by the strict combat style of a particular jousting event. In this manner, for the Gestec (any variation of course using blunt lances) a ‘hosting’ armour, usually a field armour (worn in warfare), would be able to shed and add alternative elements as required and all matching the core harness. This system of exchanging pieces of plate remained in use until the early 17th century. Almost certainly the largest and most elaborate garniture of armour was the ‘Adlergarnitur’ made in 1547 for Ferdinand, Archduke of Tyrol, which comprised over sixty separate pieces and from which three main types of tournament armour and five types of field armour could be assembled.

The unadorned but strongly sculptural and business-like appearance of the present piece perfectly demonstrates the general shift within late 16th century German armour-making towards Gestec armours constructed simply in plain bright steel. The finest examples of this development are the series of tournament armours ordered from Anton Peffenhauser for the Duke of Bavaria in 1579-80. The large smooth surfaces exemplified by these armours designed for the German Joust or Tilt were intended to easily deflect an opponent’s lance impacting on the left-hand side, the side at which the two mounted combatants would face one another on either side of a dividing barrier. The holes at the base of the present buffe took bolts rigidly securing this crucial defensive element to the breast-plate and a further bolt would pass through the single hole to the upper right of the medial ridge, securing the buffe to the upper bevor of the helmet. By this means the upper body would be held safely rigid, in complete contrast to the articulated and essential flexible fit of armour made for field combat.

In further reference to the present buffe, however, it should be noted that the sides below the area of the lower jawline are not shaped to fit over the basal rim of a helmet which is designed to turn on a collar, as was frequently the case in many exchange buffes forming part of a Gestec garniture within this later period. Similarly, this buffe is cut straight across at its upper edge, without an up-swept extension of this edge to cover the left visor pivot of the helmet. Also absent is the often seen standing flange projecting from the lower right-hand edge of the base, designed to protect the frontal joint with the corresponding shoulder defences. The absence of these features suggests that the present buffe alternatively was intended for use with a Rennzeuge armour in the Scharfrennen, a very different form of joust fought instead with sharp lances and without a barrier. In Saxony as late as 1570 – 1600 participants in the Scharfrennen wore this specifically constructed armour. The Rennzeuge involved a tailed sallet-like helmet open over the lower half of the face, a direct development from the sallet for the Rennen worn one hundred years previously. A buffe to protect the lower face and neck was bolted both to the front of the helmet visor and to the breast-plate, provision for which in the present instance has been described above.