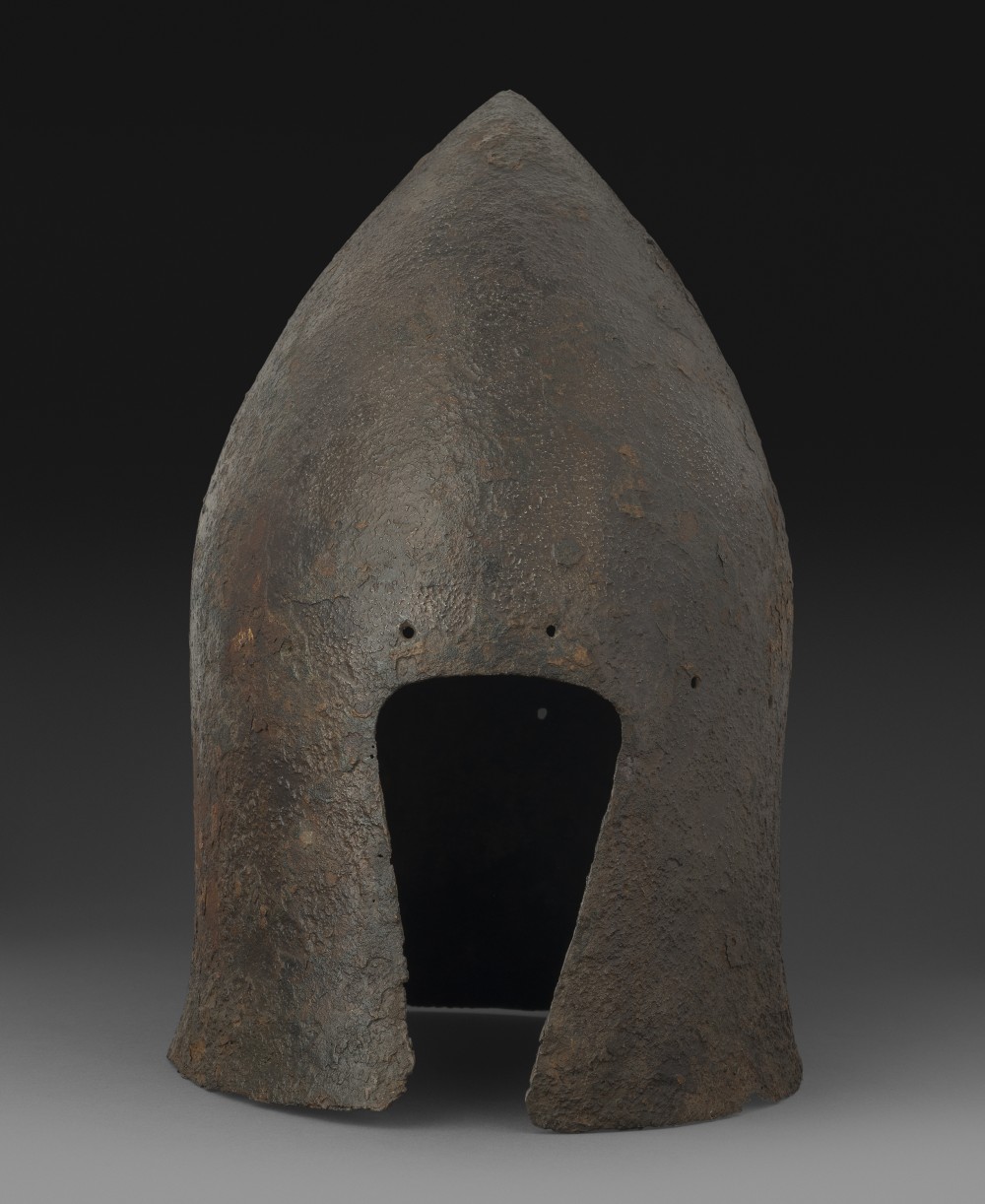 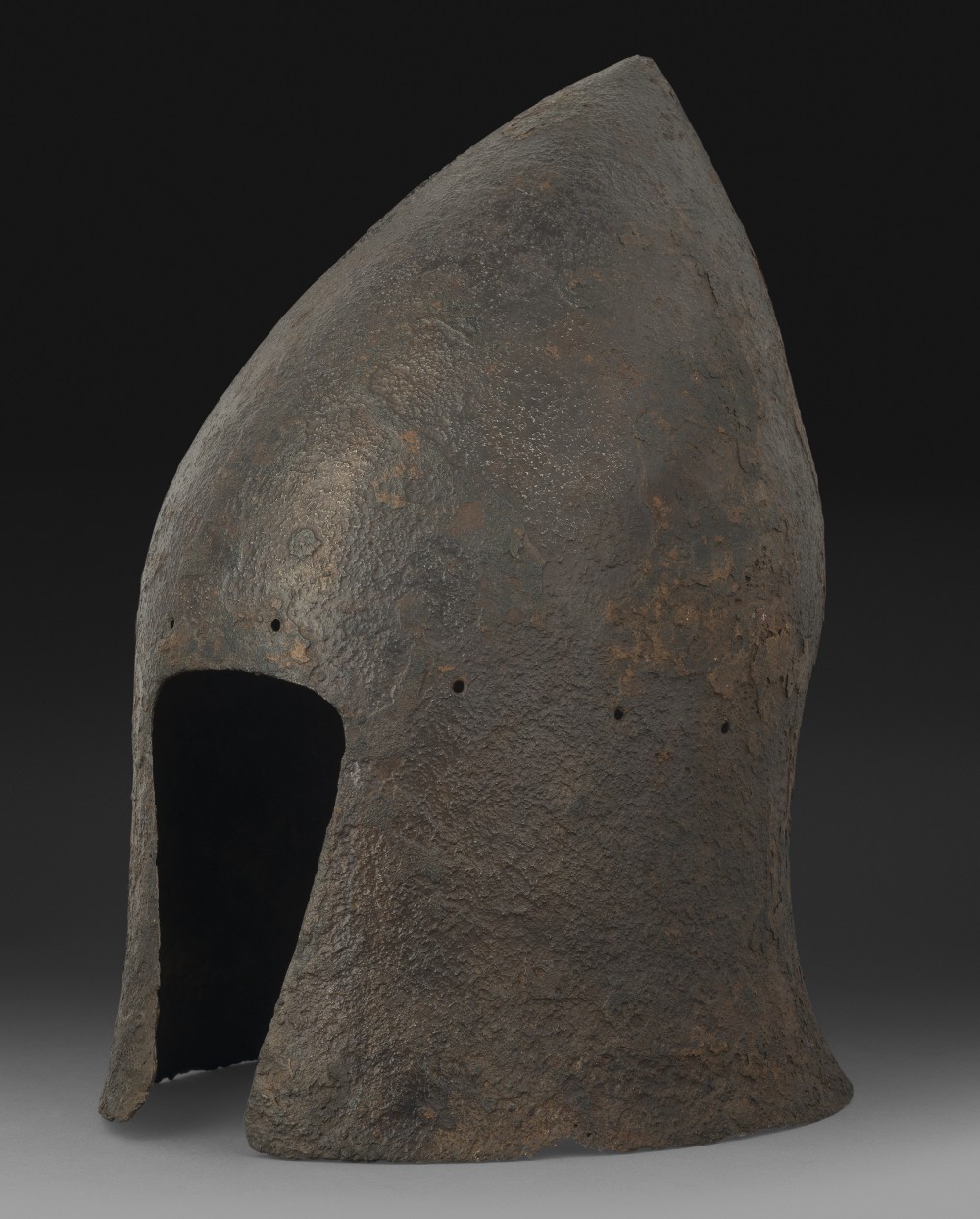 Based on its character of preservation, this helmet may have formed a part of the Chalcis hoard, discovered in the ruins of a Venetian fortress in 1840 on the Aegean island of Euboea. The hoard consisted of helmets and armour from the former armoury of the Venetian garrison there; Private collection, Germany

Until the fourteenth century the deep drawing of a helmet of this type from a single piece of steel was beyond the technical capabilities of the period. Prior to then only small quantities of iron and steel could be produced. The most common form of defence in the earlier Middle Ages was mail therefore, and any helmets and body armour that accompanied it tended to be formed of several small plates that needed to be riveted to one another or to a connecting fabric.

With the improved iron and steel production techniques of the fourteenth century larger single plates became available to armourers, allowing them to make one-piece helmets such as the present one, and eventually full plate armour.

The bascinet had its origins in a small, hemispherical skull cap or cervellière of the thirteenth century, typically worn under the coif or hood of mail of that period. In the following century, however, it evolved into a slightly more substantial, independent defence, having an increasingly tall, conical crown of the kind seen in the present example. Two main lines of development were followed by the bascinet in the fourteenth century. In the first, it acquired a moveable visor and an aventail of mail that respectively protected the wearer’s face and neck, while in the second it lacked both of these features but had its lower edge extended downwards, almost to the shoulders, to compensate for the lack of the aventail.

The present bascinet is a highly rare surviving example of this second type, popular with the infantryman of the late fourteenth and early fifteenth centuries because of the superior visibility and ventilation that it afforded the wearer.

Early evidence of the use of this type of helmet is provided by several date attributed sources, namely a silver alterpiece in Pistoia Cathedral completed in 1376, a fresco in the Basilica di S. Antonio, Padua, painted circa 1376-9, and a further fresco in the Oratorio di S. Georgio, Padua, of circa 1379-84.

The most closely comparable bascinets to the one under discussion come from the former Venetian garrison at Chalcis on the Aegean island of Euboea, which fell to invading Turkish forces in 1470. Others, similarly comparable, are those examples in the former Imperial Ottoman arsenal in Istanbul, in which trophies of arms and armour taken as booty from defeated Christian forces were periodically deposited.

The Chalcis armour was discovered in 1840, eventually being deposited in the National Historical Museum, Athens, circa 1919-20. A number of pieces, however, are known to have been removed from the find prior to the detailed publication of the group in 1911, notably the significant quantity sold to Dr. Bashford Dean circa 1919-20.  Among these, the bestbascinets passed in 1929 to The Metropolitan Museum of Art, New York. Of these, acc. nos. 29.158.45 and 42.50.33 are of exactly the same form as the present example. No.s B2 and B7 remaining in the museum in Athens are very similar also.

Two more examples of the kind of bascinet under discussion are in the arsenal at Istanbul, the former Christian church of St. Irene. Four further examples of this type are recorded, also part of the Chalcis group: one each in the NHM Athens (B1), in the MMA New York (acc. no. 29.158.43), in The Cleveland Museum of Art (acc. no. 23.1065) and in The Wallace Collection, London (cat. no. A74).

All of these examples cited additionally share with the present bascinet a specifically characterised state of preservation. Considering this, together with its place within the typology of the group, it is most likely that the present bascinet was a part of the Chalcis find also.