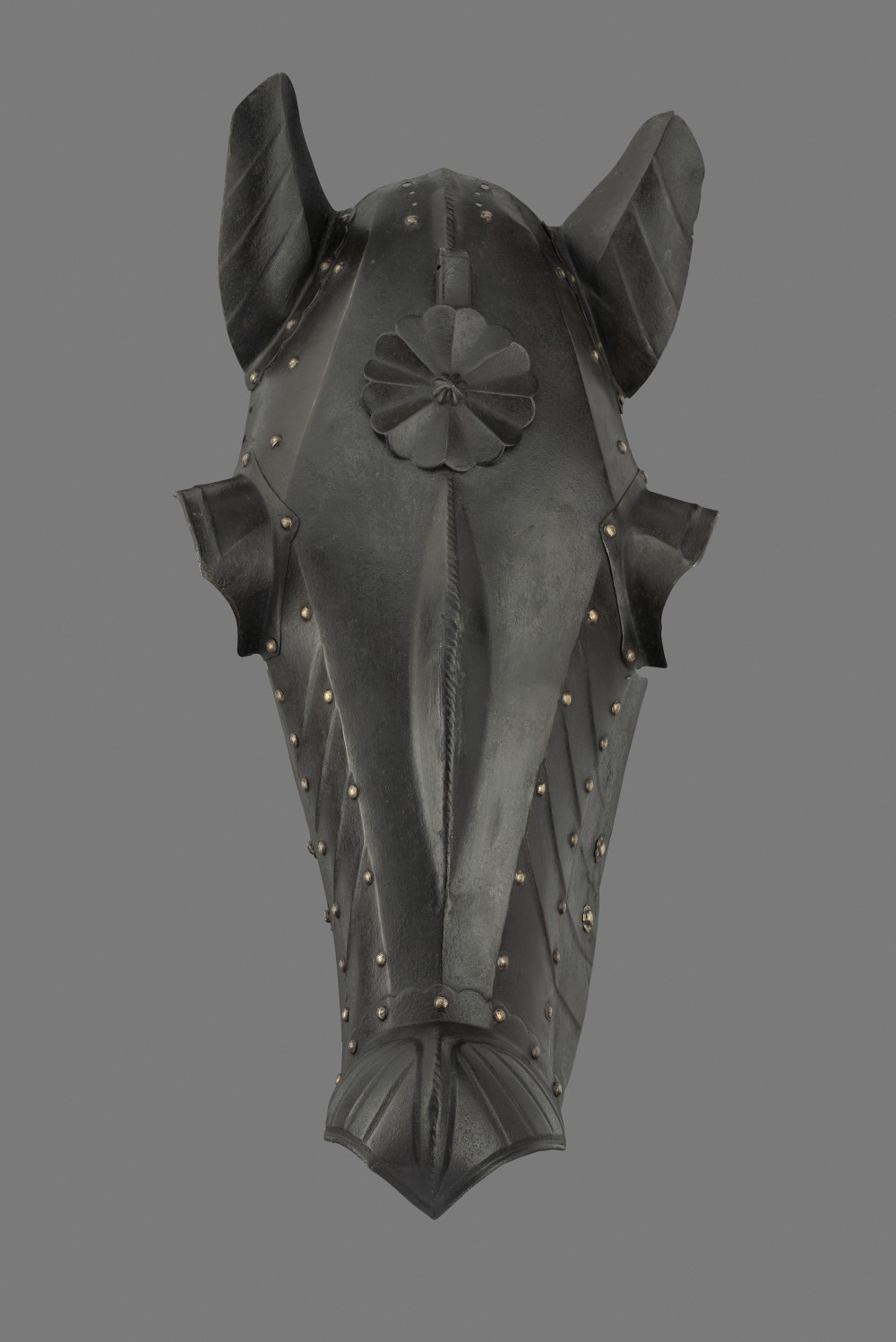 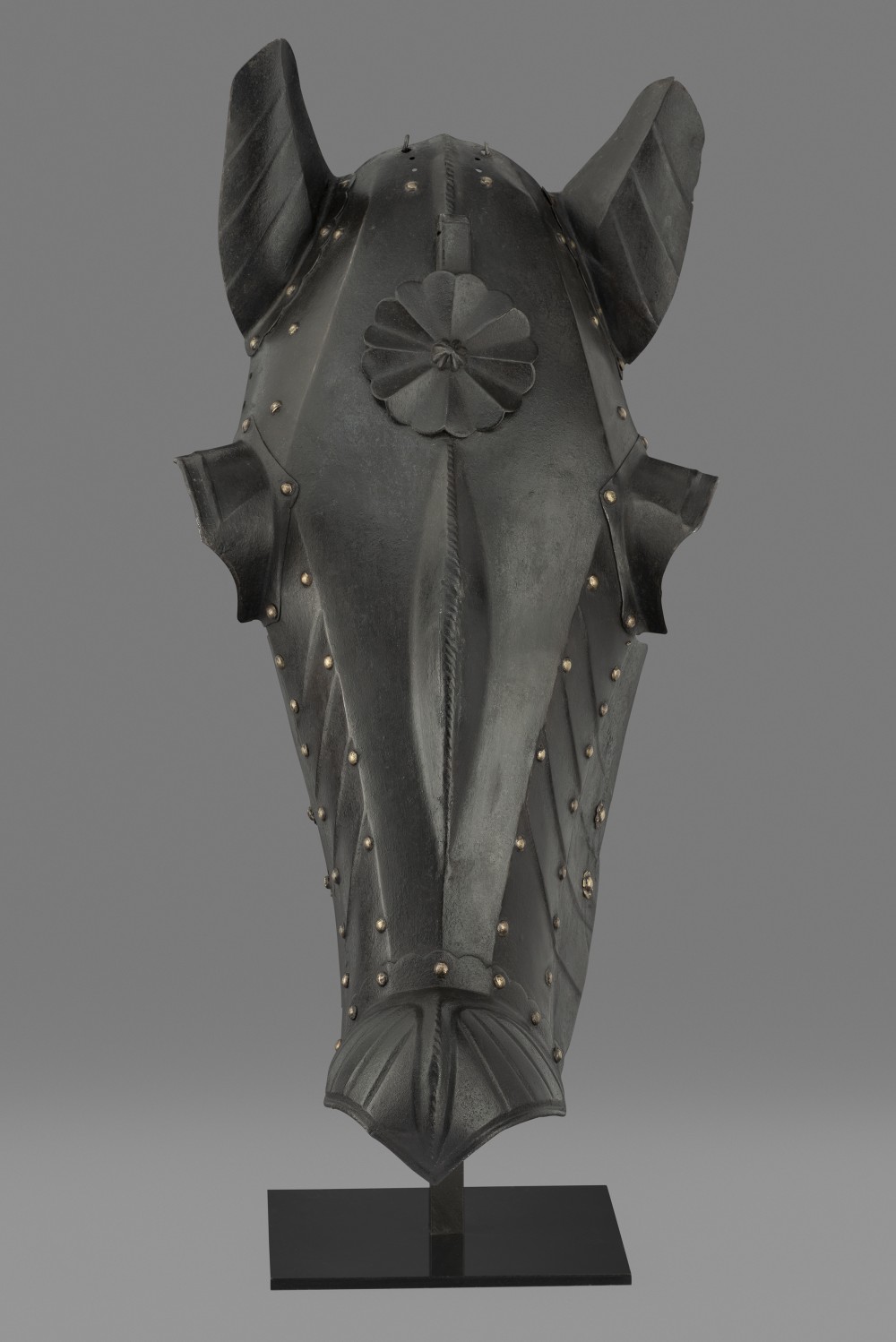 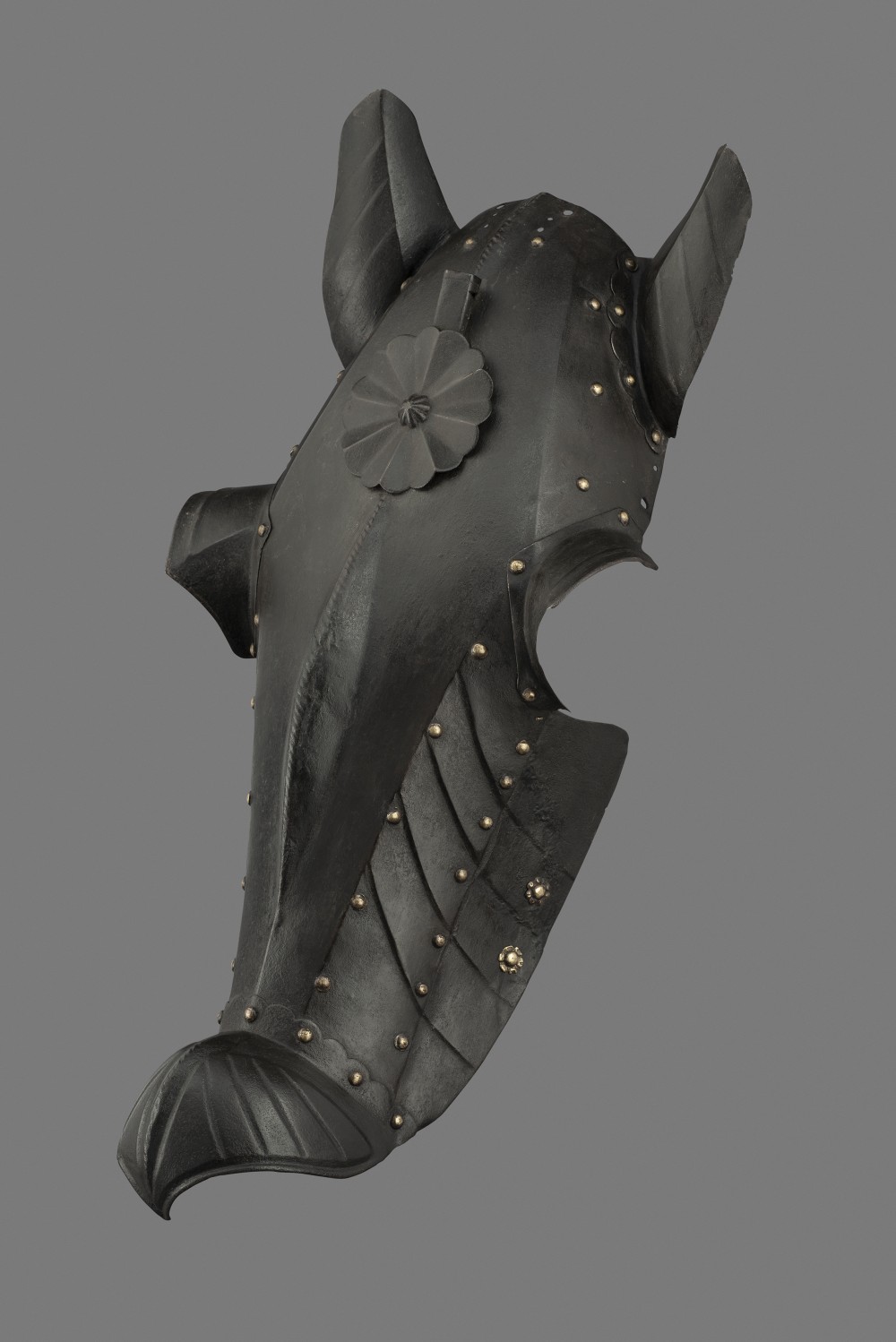 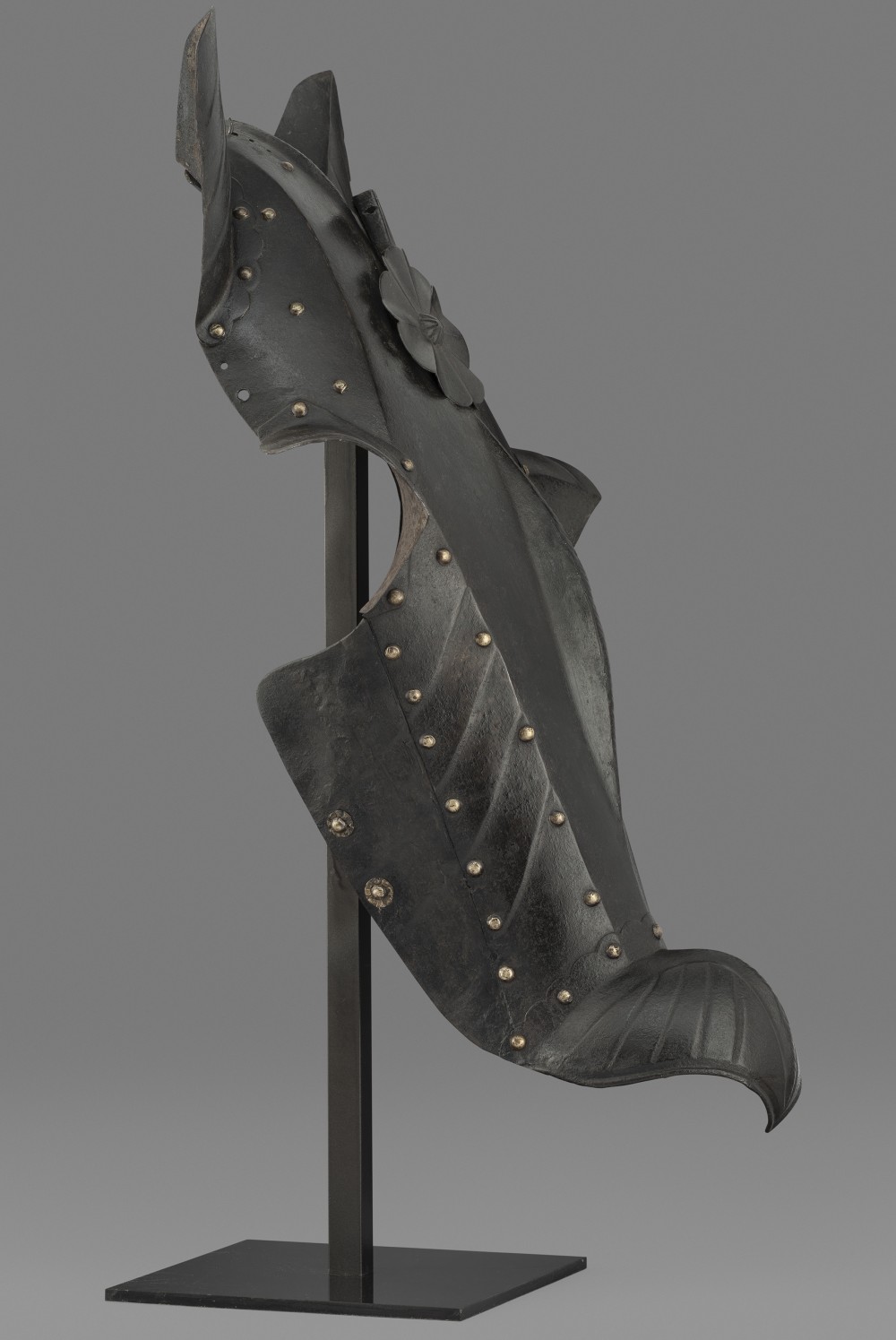 This shaffron is of a distinctively Flemish fashion of about 1520-30. It relates to, and may possibly derive from, a large quantity of Flemish horse armour imported into England in the time of King Henry VIII and stored in the Tower of London Armouries in readiness for its use by his cavalry.

In the late 15th and early 16th centuries Flanders rivalled Northern Italy and Southern Germany as a major centre for European armour-production. Although the armourers of Flanders like those of much of Europe looked to Northern Italy and Milan in particular, to provide the models for their own styles, they tended to adapt those models to Northern European tastes by introducing forms and decorative details that imbued them with a recognisable character of their own.

The earliest surviving shaffron to which a Flemish origin can confidently be assigned is one in the Real Armeria, Madrid (cat. no. A. 11), associated with an armour of the Flemish-born Philip I, the Handsome”, King of Castile (1478-1504-1506) which bears the mark of an unidentified armourer known to have worked for him in Flanders. The shaffron, moreover, bears engraved decoration from the hand of Paul van Vrelant of Brussels, which was perhaps applied in 1505 when he was paid for the decoration of various items of equestrian equipment for the King.  Very close to it in style, and therefore presumably in date as well, is an undecorated shaffron in the same collection (cat. no. F, 110).

Of a somewhat later date than the latter but once again decorated by van Vrelant of Brussels are further two shaffrons in the Real Armeria, Madrid (cat. nos F. 111-12) which were almost certainly among six that van Vrelant was paid for decorating in 1520 for the Emperor Charles V, son of Philip the Handsome, and like the latter born in Flanders.

Very similar in style to them are two undecorated shaffrons in the Real Armeria, Madrid, each forming part a complete horse armour bearing the mark of the Flemish armourer Guillem Margot who is recorded a having worked between 1494 and 1530 for Philip the Handsome, Charles V and the latter’s younger brother Archduke Ferdinand who for a time served as governor of the Burgundian Low Countries. The records show that horse armours formed a significant part of his output.

Two further horse armours bearing Margot’s mark are among the remains of the personal armoury of King Henry VIII of England, preserved in the Royal Armouries at the Tower of London.  Both are decorated by Paul van Vreland. One of them may have formed part of a gift of armour made to the King by the Emperor Maximilian I in 1514, while the other appears to have been decorated by van Vreland in England between 1514, when he took up employment with the King, and 1519.

Flemish armour was evidently much appreciated in England around that time, as is shown by the fact that in 1511 King Henry brought over to the country to work for him in a royal workshop that he set up in his Palace of Greenwich, two armourers from Brussels: Copyn de Watt and Peter Fevers.

However, much munition armour of Flemish make was also imported into England in Henry’s time, including substantial quantities of horse armour that are still to be seen in part among the remains of the former national arsenal of the Tower of London, and are now distributed between there, the Royal Armouries Museum, Leeds, Windsor Castle and Hampton Court.  Shaffrons form a significant part of those remains.

Viewed collectively, they show a clear relationship in both form and detail to the Flemish examples in Madrid discussed above. Persistent among their features are the boxing of their sides, and the decoration of those sides and the ear-defences with cascaded fluting of the kind seen on the shaffron under discussion.  Although some of the Henrician shaffrons are likely from their close resemblance to the Philip the Handsome example of c. 1505 discussed above to date from the earliest years of the King’s reign (1509-47), others of a bolder form and with boldly roped edges clearly date from a later part of it.

What appears to be the latest of them, inv. no. VI. 35 in the Royal Armouries Museum, Leeds, is also that which most closely resembles the example under discussion. It, like the latter is boxed at each side, decorated over the nose with a roped medial ridge, fitted with separate defences for the ears, the nose, and formerly the eyes, and is ornamented at the brow with a small, radially fluted roundel. Even more similar to the example under discussion is one formerly in the collections of the Baron C. A. de Cosson at Pyrcroft, Chertsey, Surrey, and Sir Edward Barry at Ockwells Manor, Bray, Berkshire. It shows not only the same cascaded fluting on its sides and ear-defences, but also the same very distinctive fluted decoration on its prominent nose-defence. Exhibiting many of these same features is a shaffron formerly in the collection of Alfred W. Cox of Glendoick, Perthshire. The fact that both the Barry and Cox shaffrons had an English provenance raises the very real possibility that they may have been sold from the Tower of London’s overcrowded storerooms - often simply as old iron – in the 18th and 19th centuries.  It is not impossible that the markedly similar shaffrons in the Cleveland Museum of Art, Ohio, and the Museo Civico Medievale di Bologna might have shared that origin. Aside from having fixed rather than separately applied eye-defences, the Bologna example is almost the twin of the example under discussion.