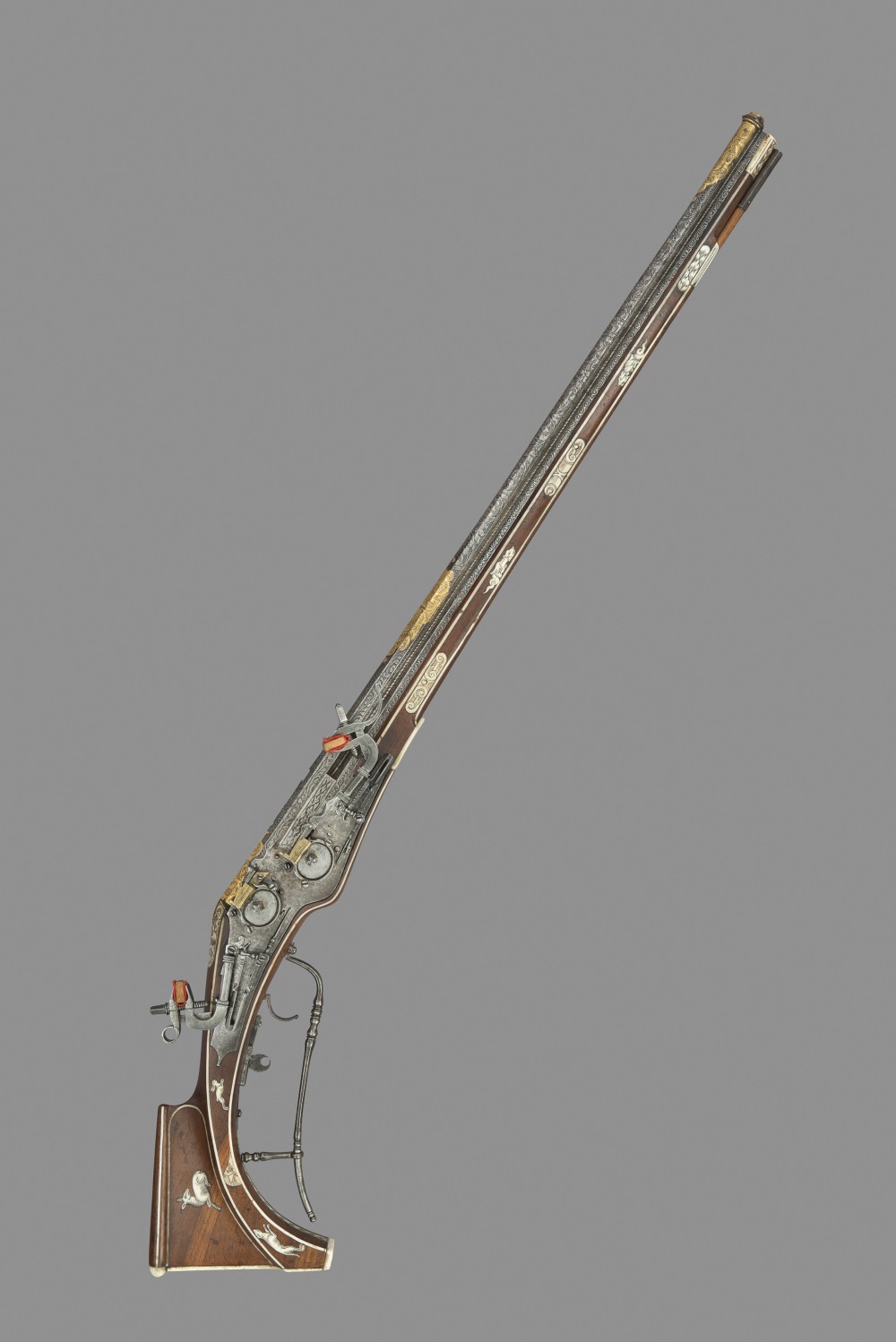 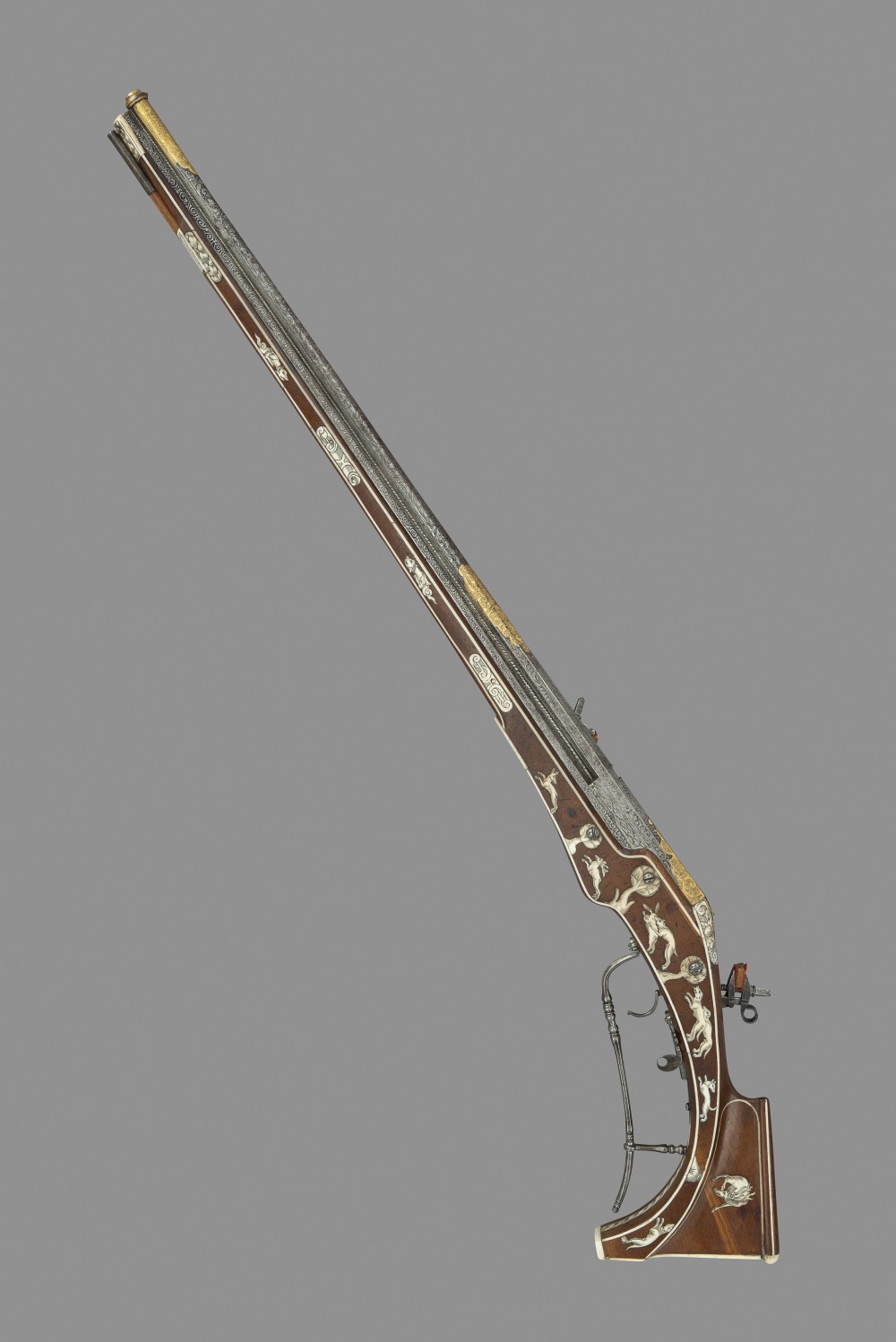 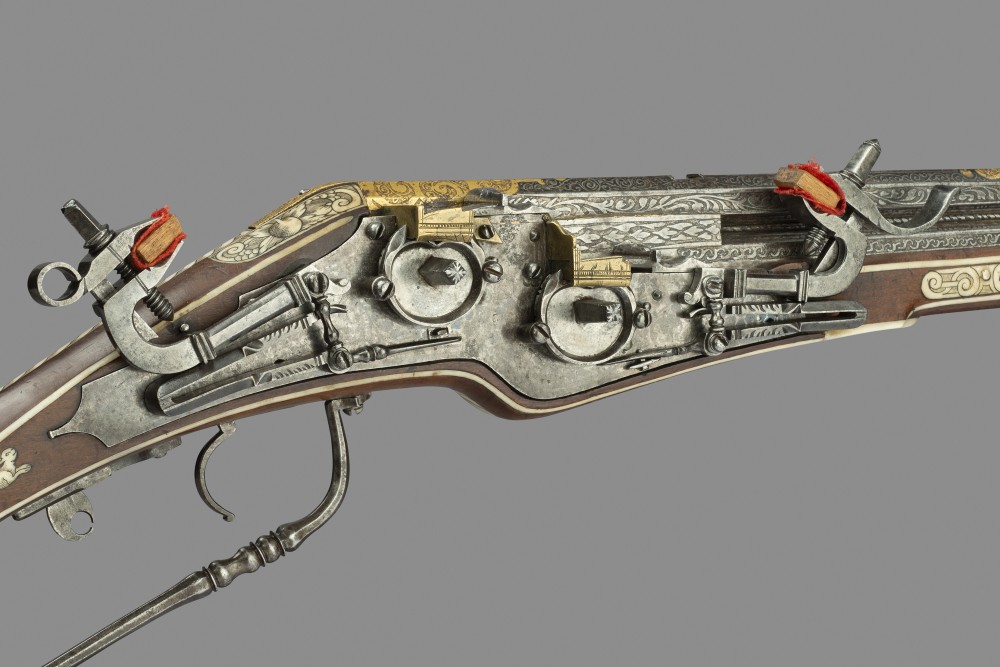 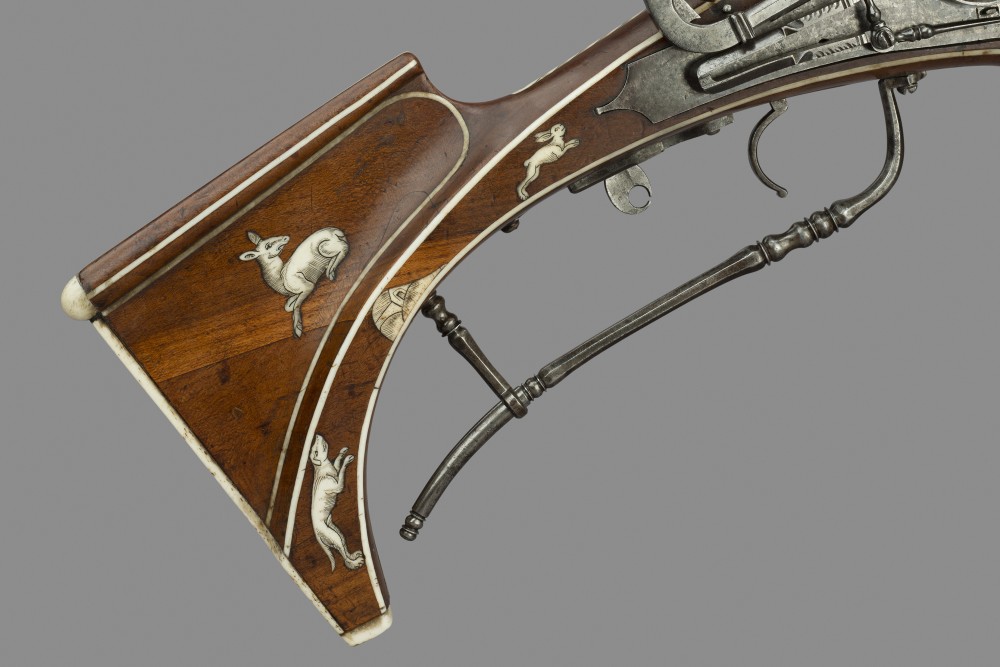 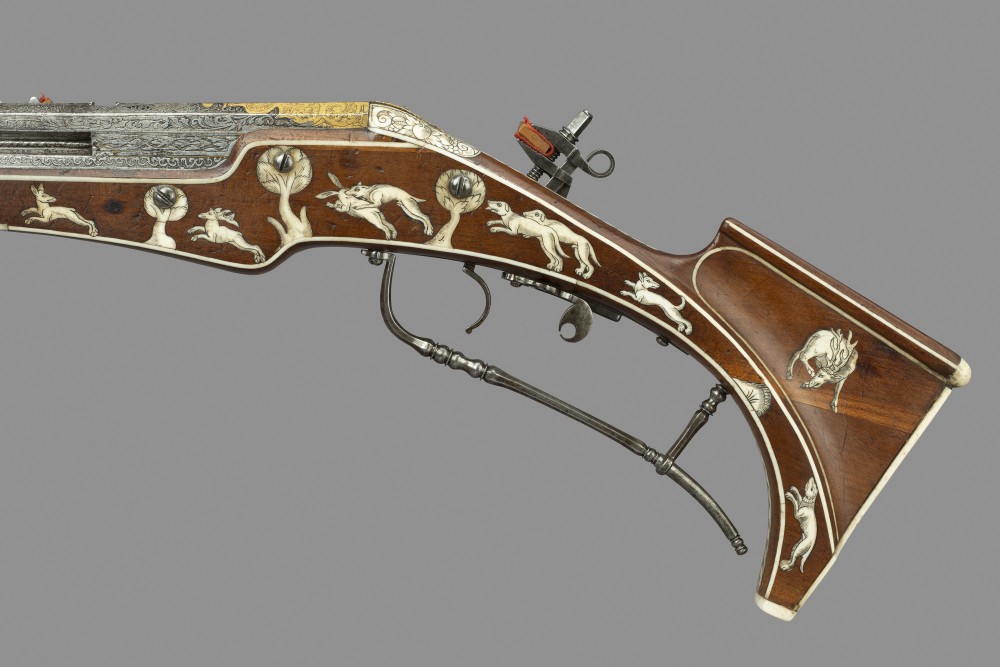 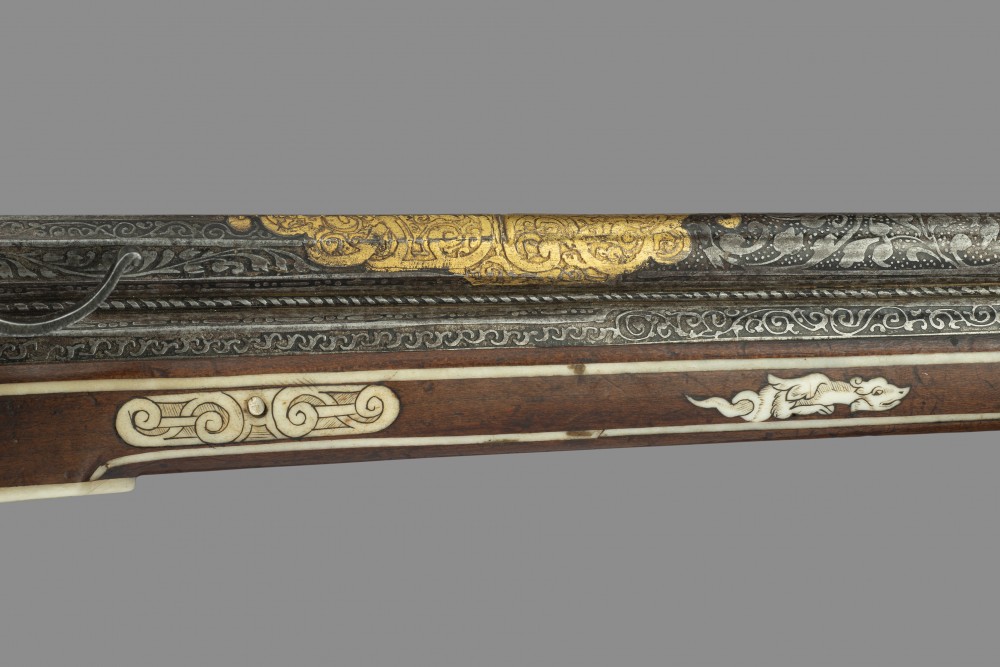 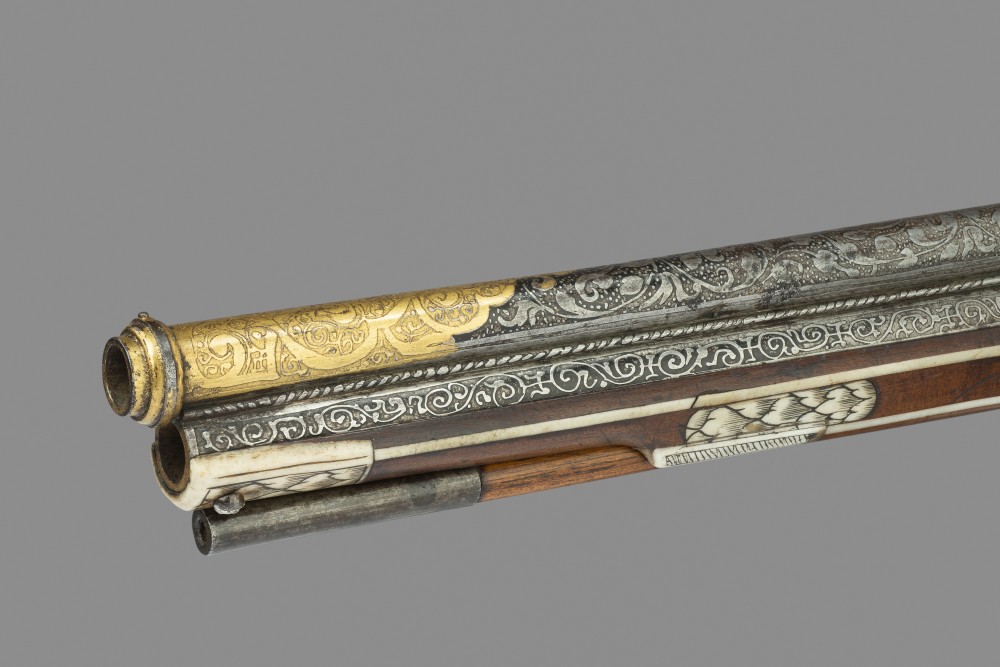 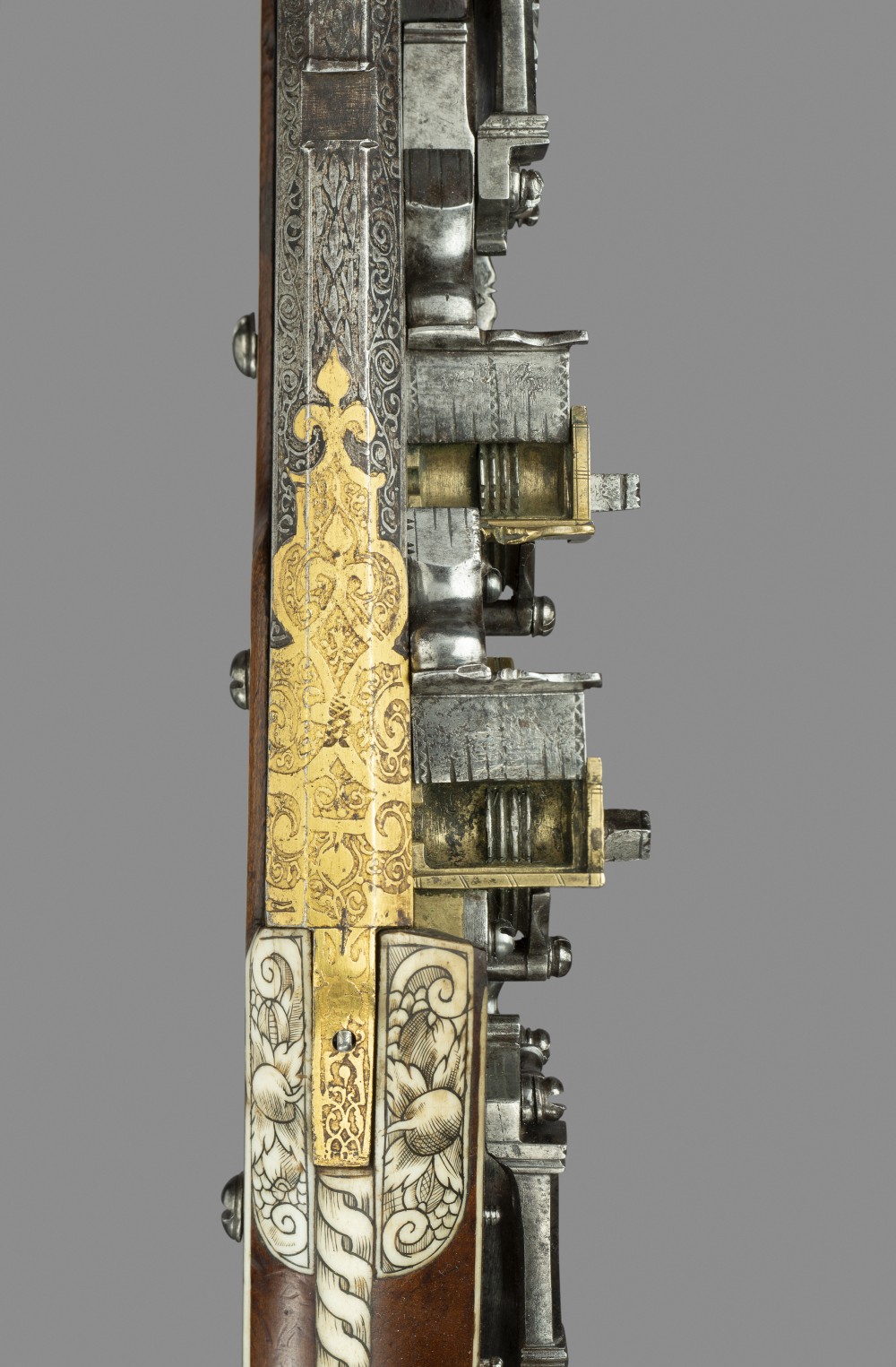 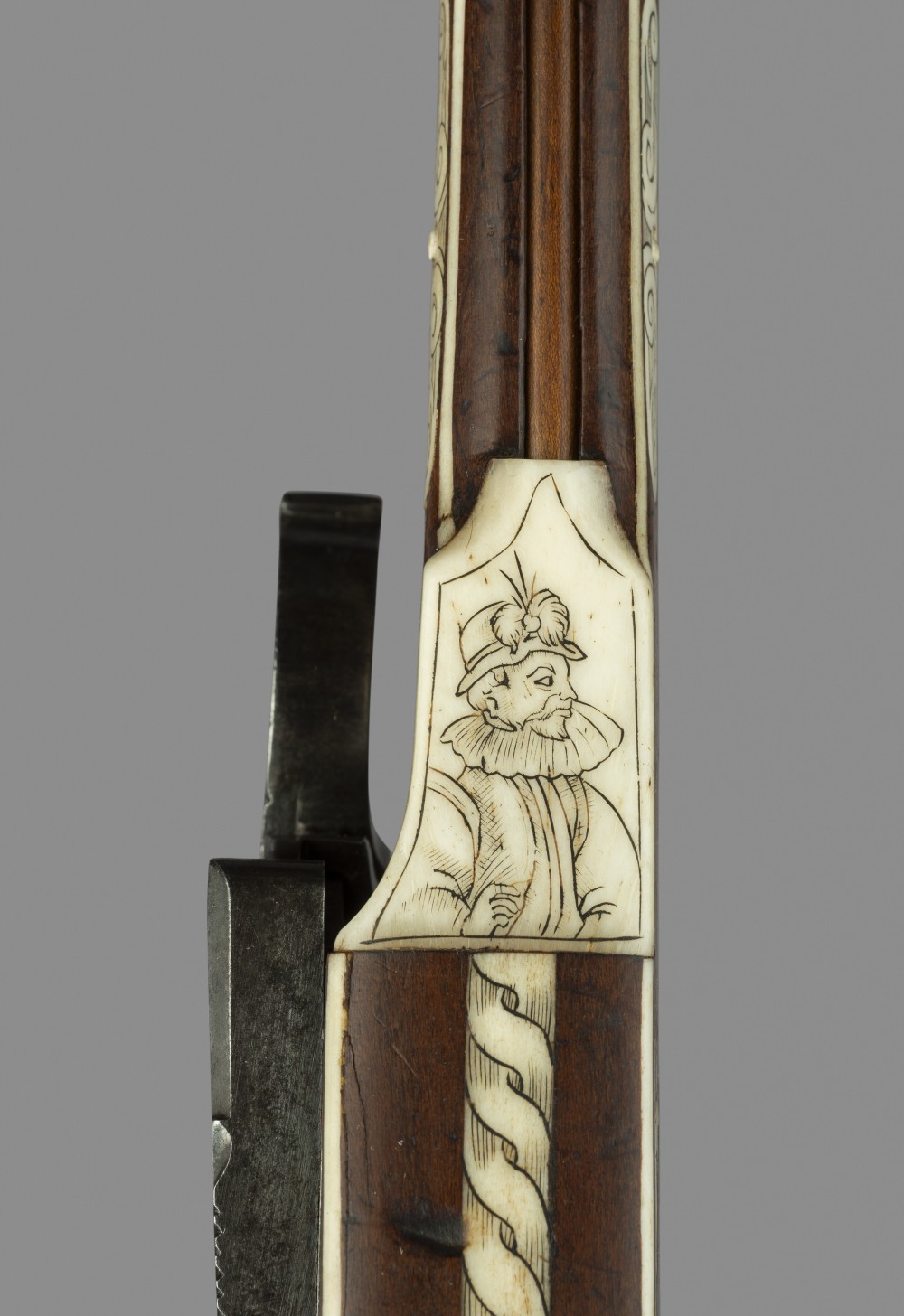 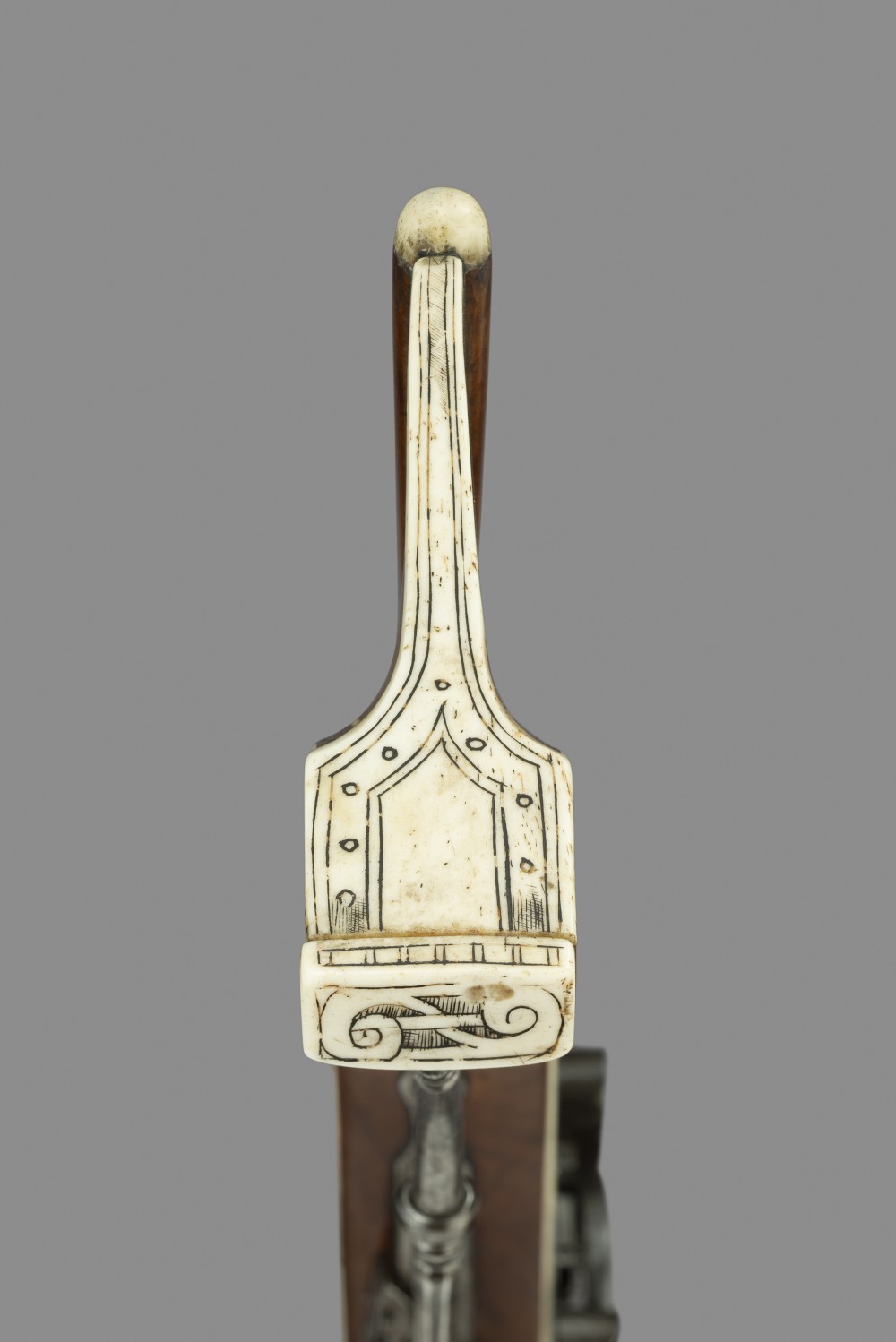 This carbine is preserved in superb and untouched condition; as such it is perhaps unused. The second barrel is fired by a second mechanism carried on a single lockplate, the two mechanisms being engaged by a single trigger: this both reduced the weight and maintained the ease of handling. Unlike the best-quality single-trigger game shotguns of modern times, however, the historical owner of this carbine would have needed to cock each of the two mechanisms in succession. Nonetheless, the advantage of a second shot, not only pre-loaded in the second barrel but with the second mechanism already primed and spanned (a laborious and as yet unavoidable process in wheel-lock firearms), this would be considered a clever and significant improvement at the end of the 16th century.

The fulsome extent to which the barrels in this instance have been decorated with etched designs and bands of fire-gilding confirms the status of this carbine as a luxury weapon, but one as much intended for defence as for the hunt. The etched designs are typically from the South German design repertoire and the high quality of the overall finish underscores the origin of the carbine, which is indicated by the control mark of the city of Augsburg.

Of particular interest is the trace of foliate designs which very unusually have been lightly applied simply by a blued finish. Similarly, the rare placing of the safety-catch away from the lockplate, or from the stock opposite it, has very logically put the device in convenient reach of the user.

The stock is again very much in the South German fashion, the engraved white staghorn inlay contrasting beautifully with the warm colour of the fruitwood. The engraved details themselves are little changed over the previous thirty years, retaining the same German Late Renaissance subjects and characteristics that are found on furniture, games boards and luxurious inlaid boxes of the period.

The shape of the butt reveals the contemporary influence of Italian fashion in South German gunmaking. Specifically and most famously, the same slender high-combed form exists in the fruitwood stocks of the single-barrelled wheel-lock carbines which were made for the bodyguard troops of Wolf Dietrich von Raitenau, Prince Archbishop of Salzburg. Made with undecorated barrels and locks in several series over the period 1590-1600, the von Raitenau carbines variously bear the marks of Augsburg, Suhl and of several different South German and Salzburg gunmakers, but they have in common the form of stock shared by the present carbine, similarly enriched with a related style of horn inlay. For comparison an example of the von Raitenau type is in the former imperial arms collection in Vienna (A808).