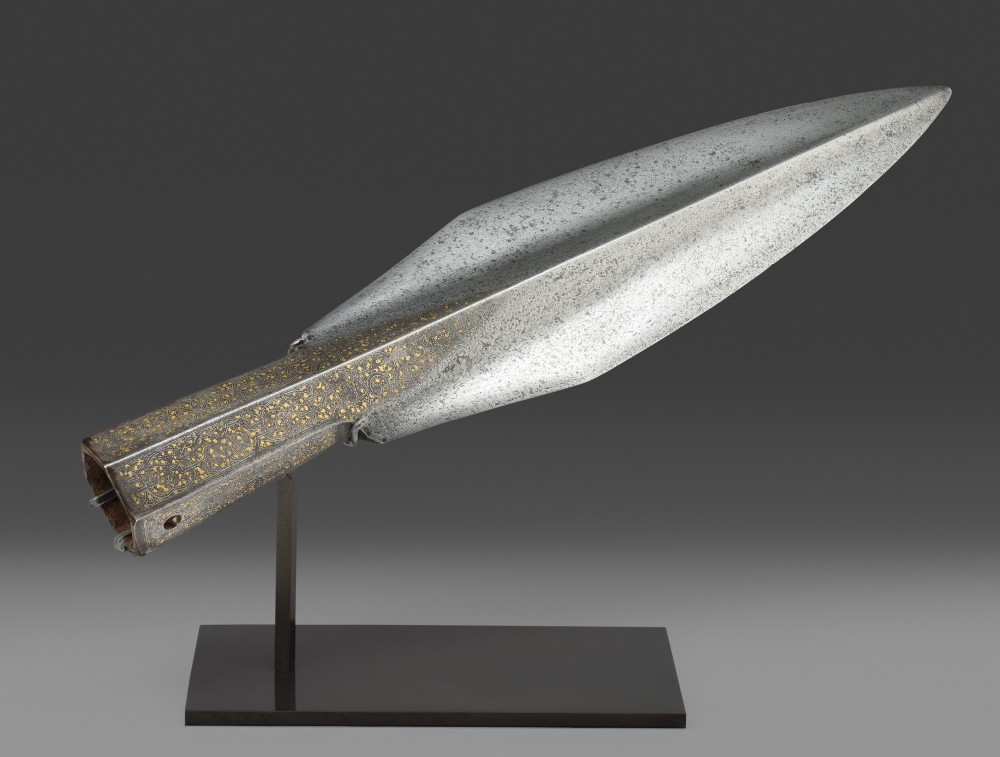 The massive proportions of this spear head distinguish it as a weapon primarily intended for hunting bears, and in this respect it differs from the smaller and much more frequently seen spears for boar and deer. The proportions of this spear head readily bring to mind the spears carried by the three bear hunters in Burgkmair’s engraving of 1526 for series forming The Triumph of Maximilian.

An undecorated spear of very closely comparable size and form is in the Wallace Collection, London (A 935), albeit described as a boar spear and as German; this discrepancy is understandable, its origin especially so, in the absence of the identifying fine ornament existing on the present example.

The present spear is richly decorated with gold and silver damascened patterns covering the full surfaces of its long hexagonal socket. The damascened work is of exceptional quality and the designs drawn with equal delicacy. The sliver double-linear strapwork pattern shows German influence but the gold arabesquescrollwork ground upon which it is heightened is unmistakably French work of the period. Comparable damascened arabesque designs are found on a range of French late 16th century luxury iron wares, and not least on the highest quality firearms and edged weapons. A strong closely comparable example is provided by the gold work on the hilt, blade and scabbard mounts of a French combined cutlass and pistol of circa 1550-60, formerly in the collection of the Barons von Rothschild and formerly on long-term exhibition in the Kunsthistorisches Museum, Vienna (A 2249).

The quality of the damascening indicates that this spear certainly belonged to the personal hunting armoury of a high-ranking noble, likely of a royal house.