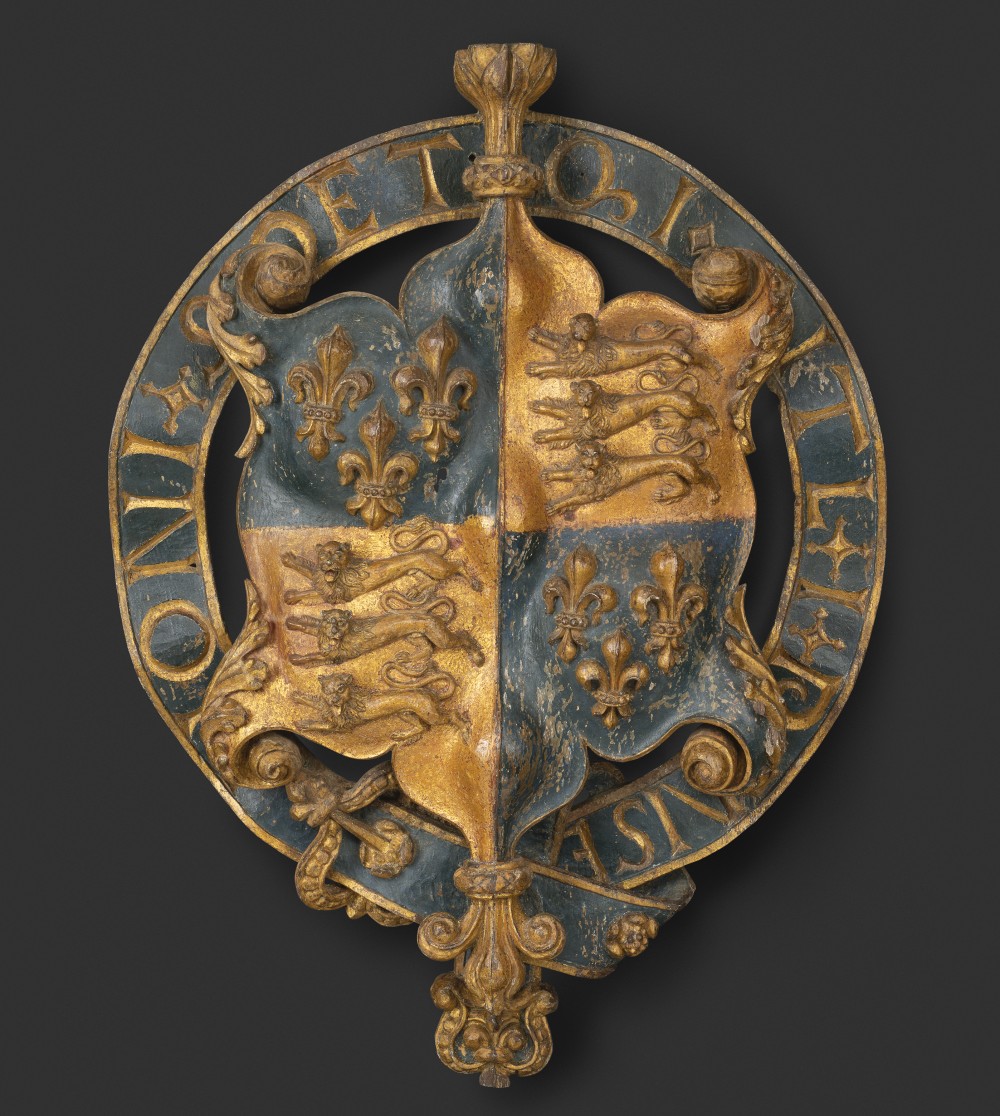 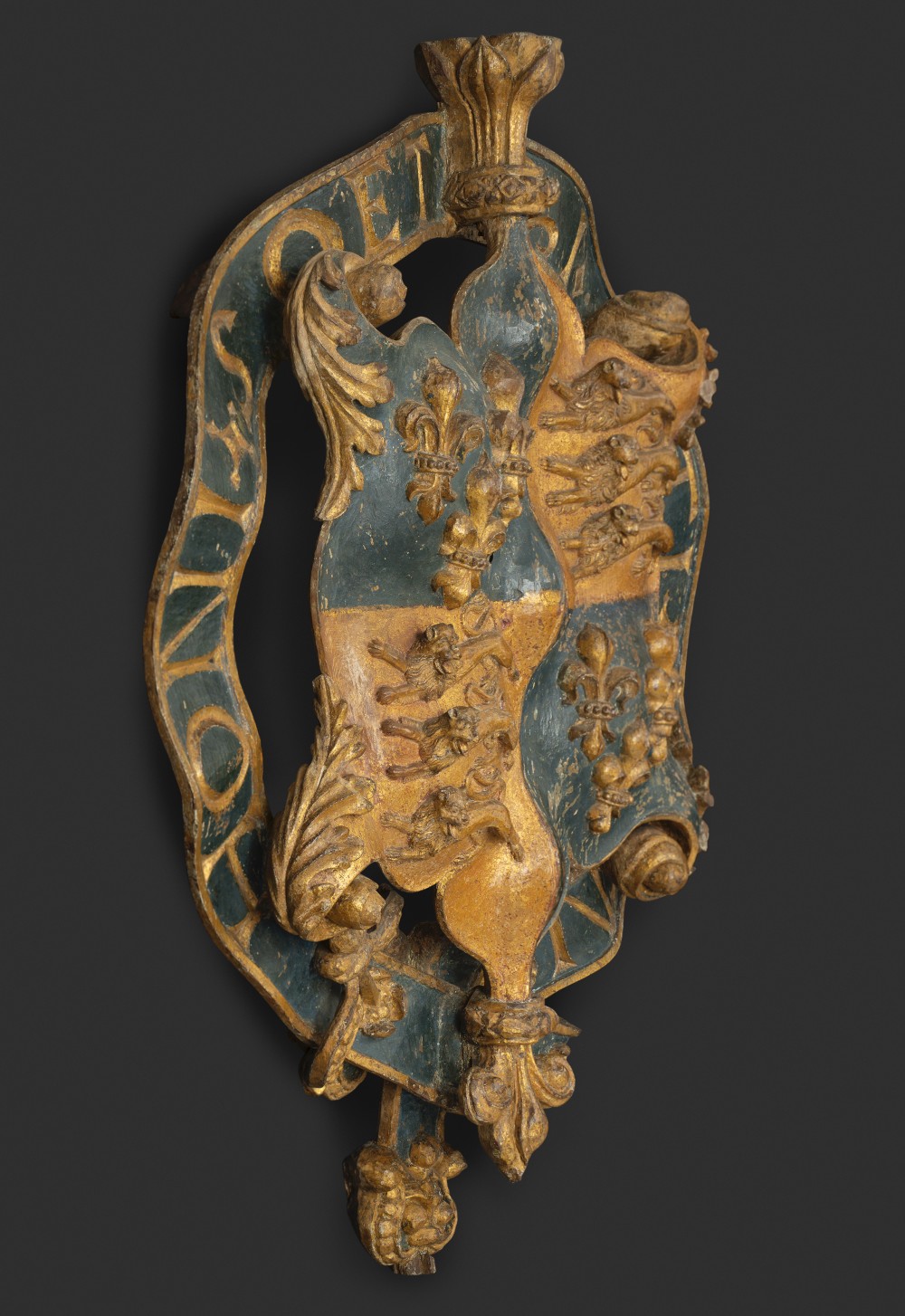 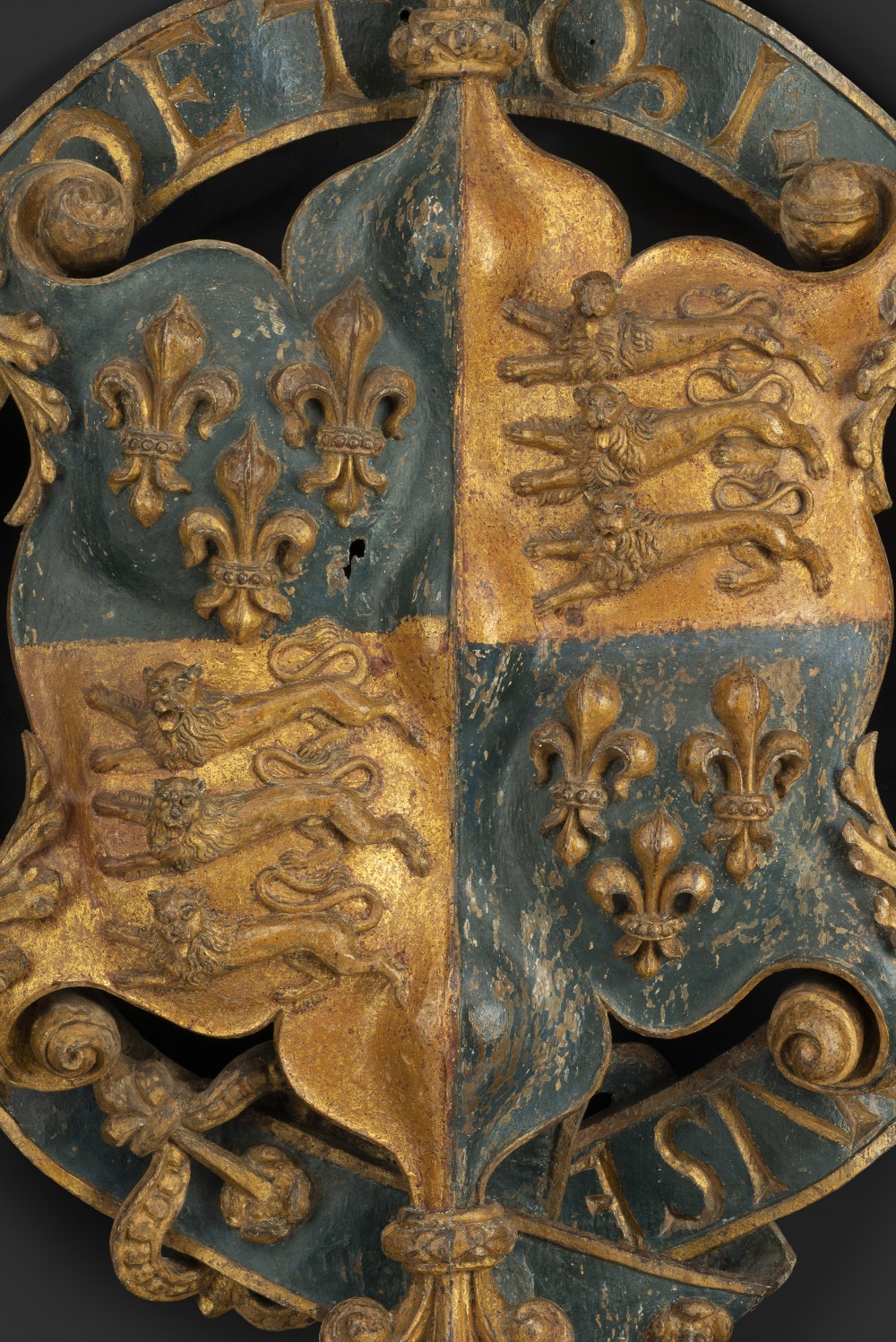 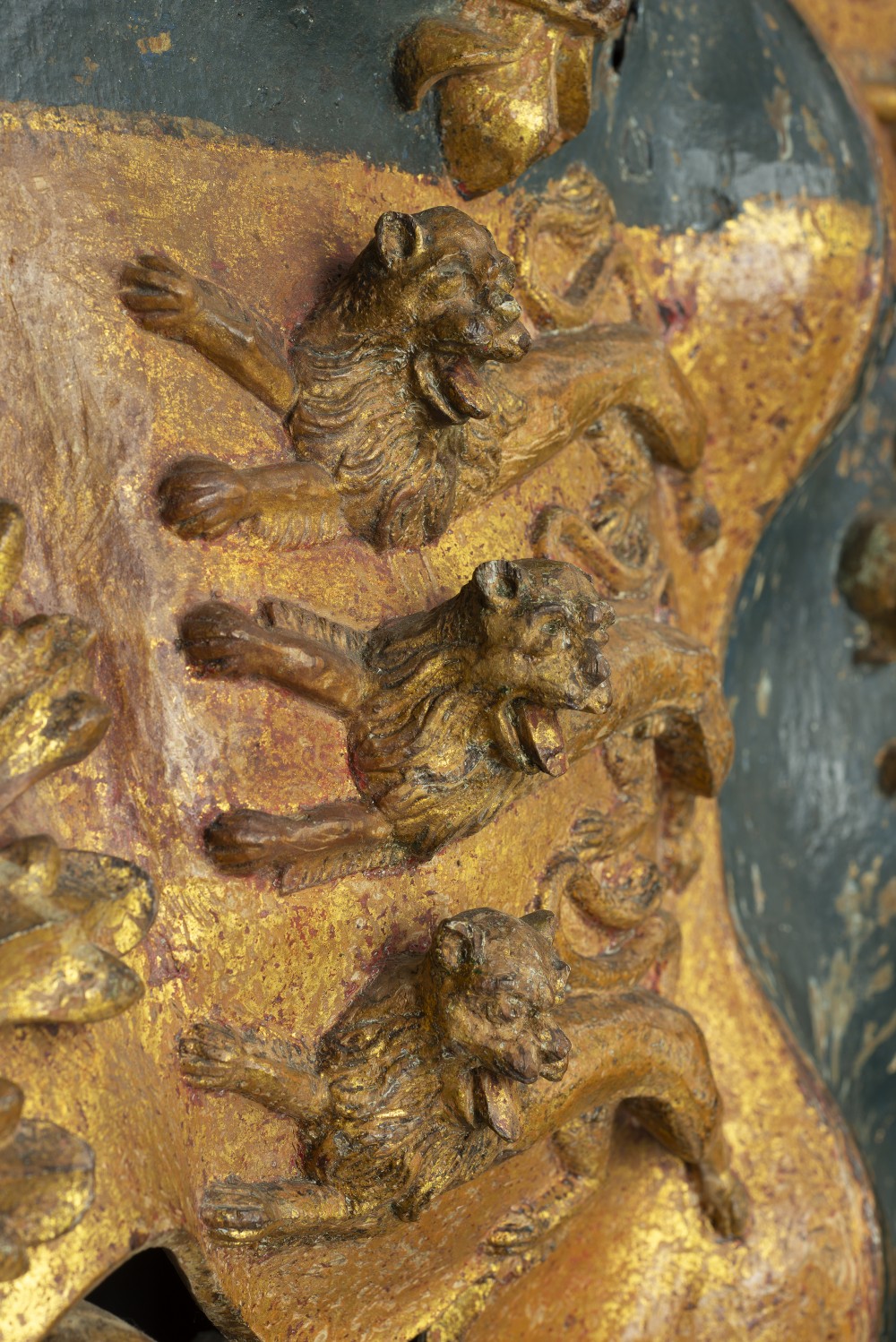 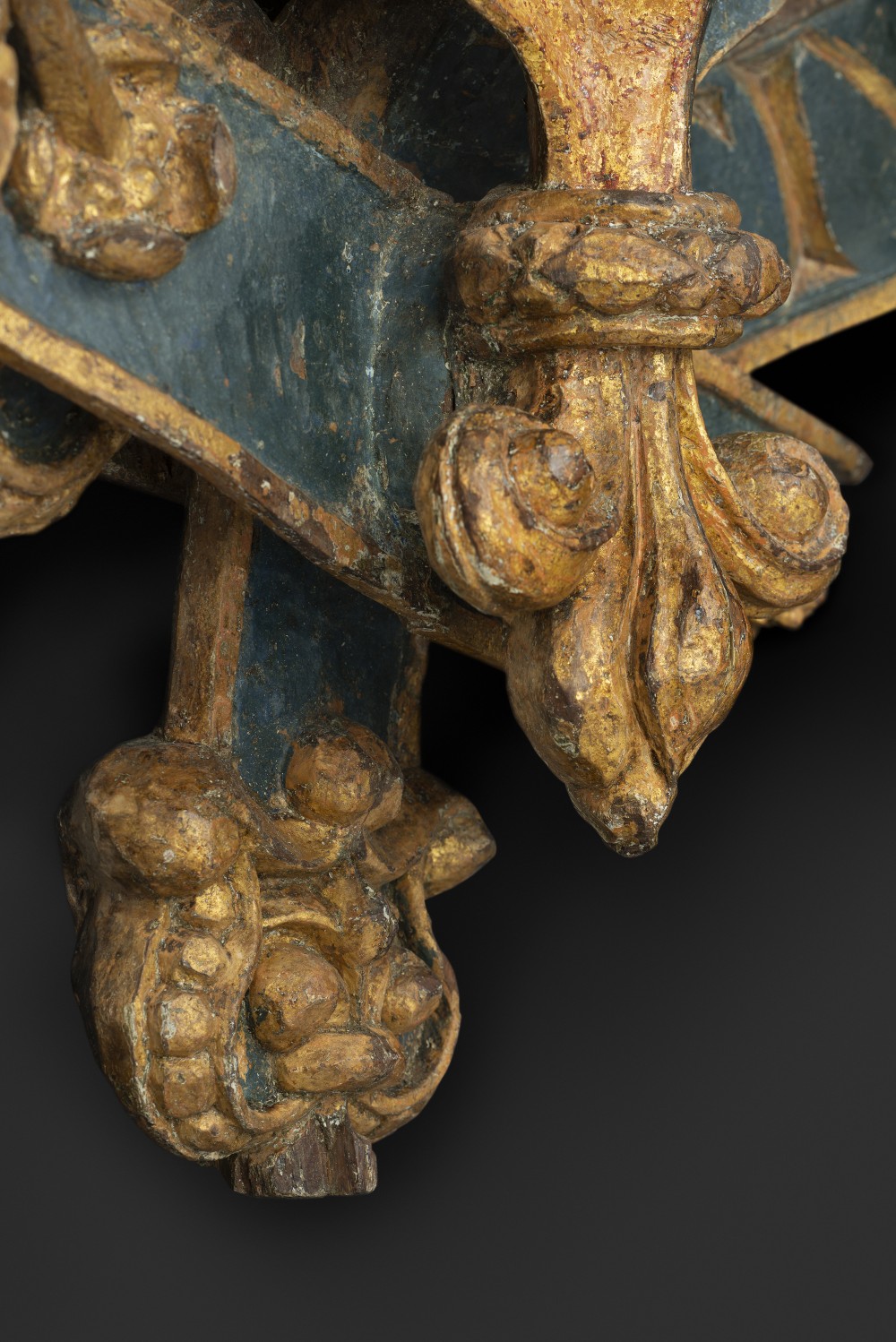 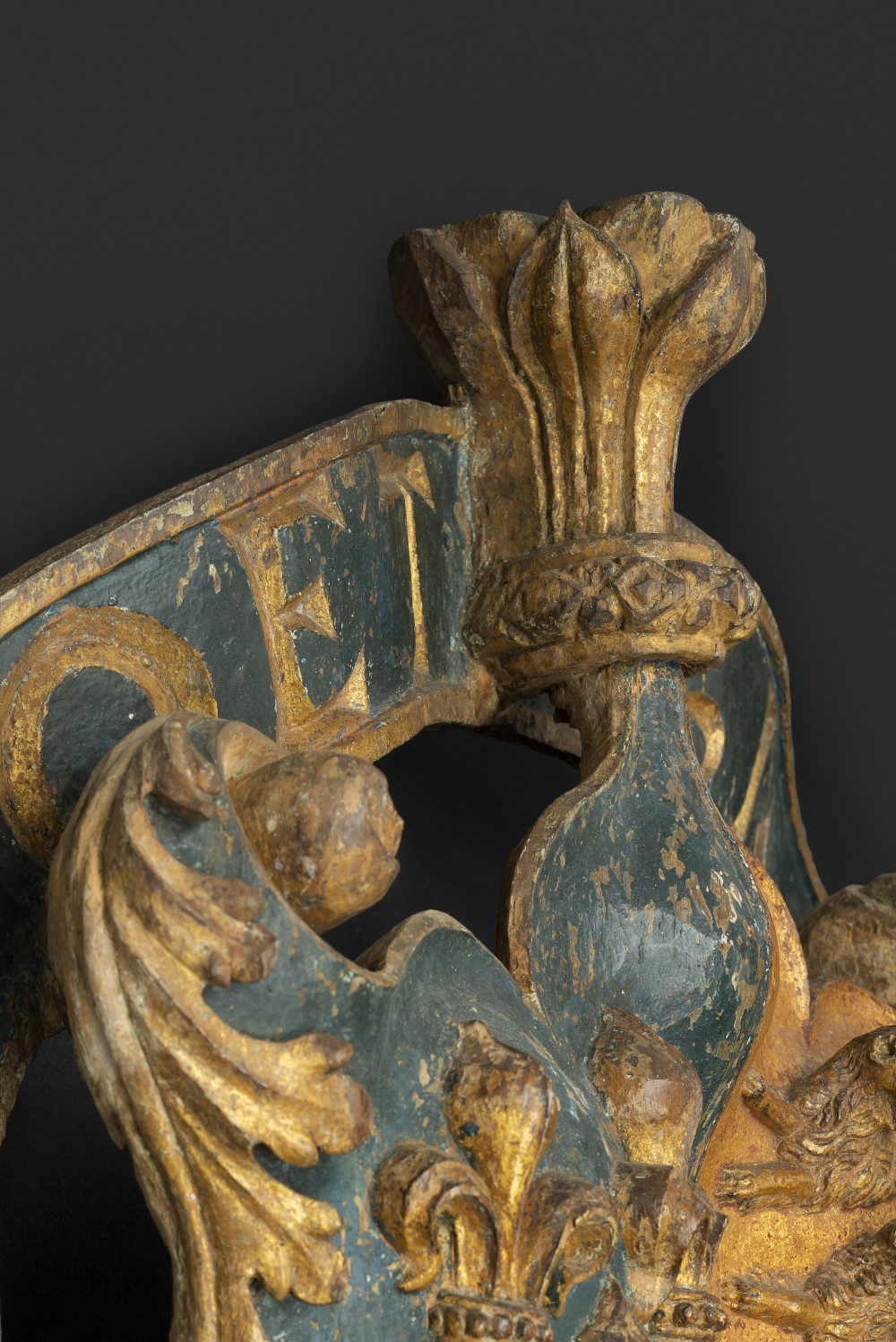 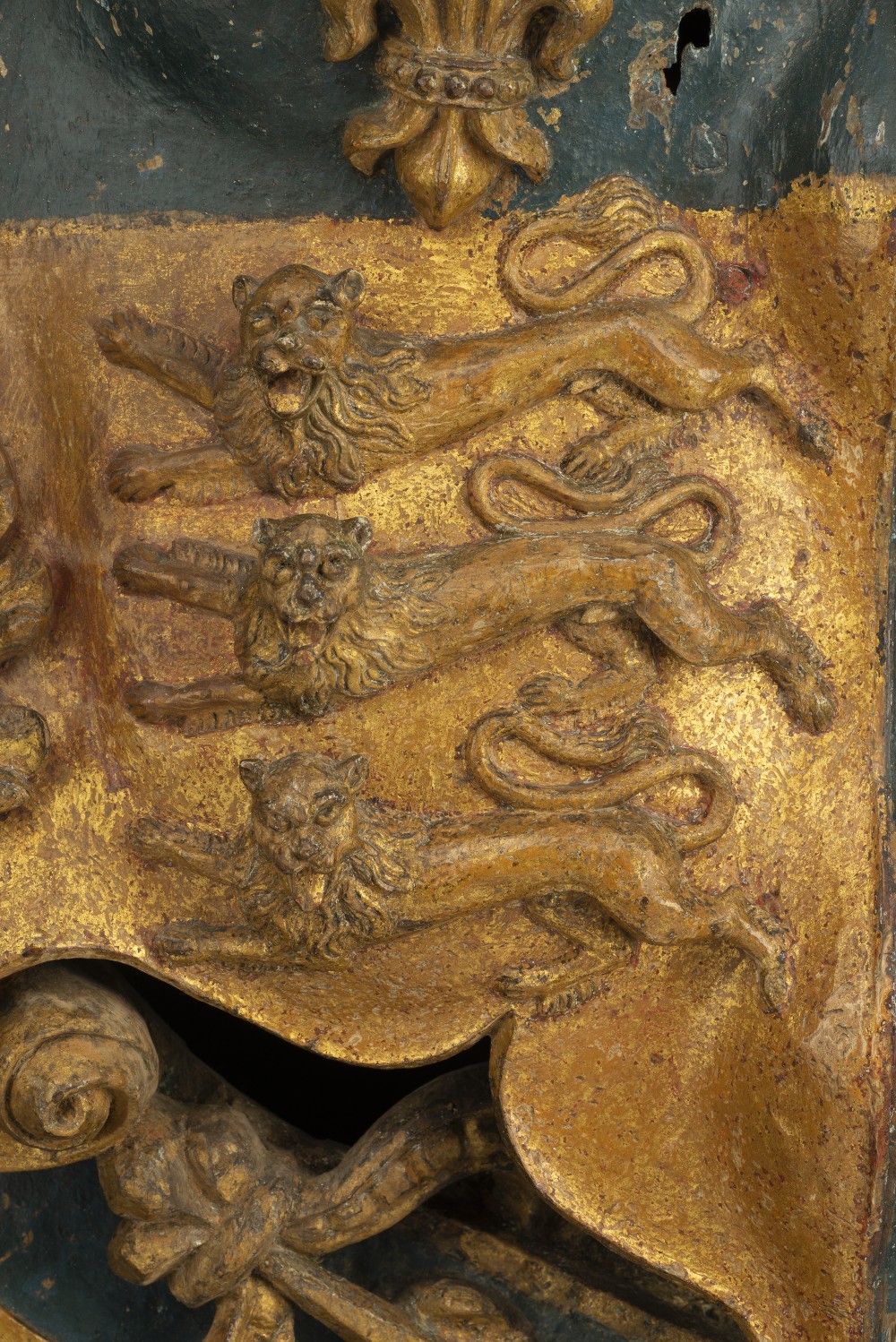 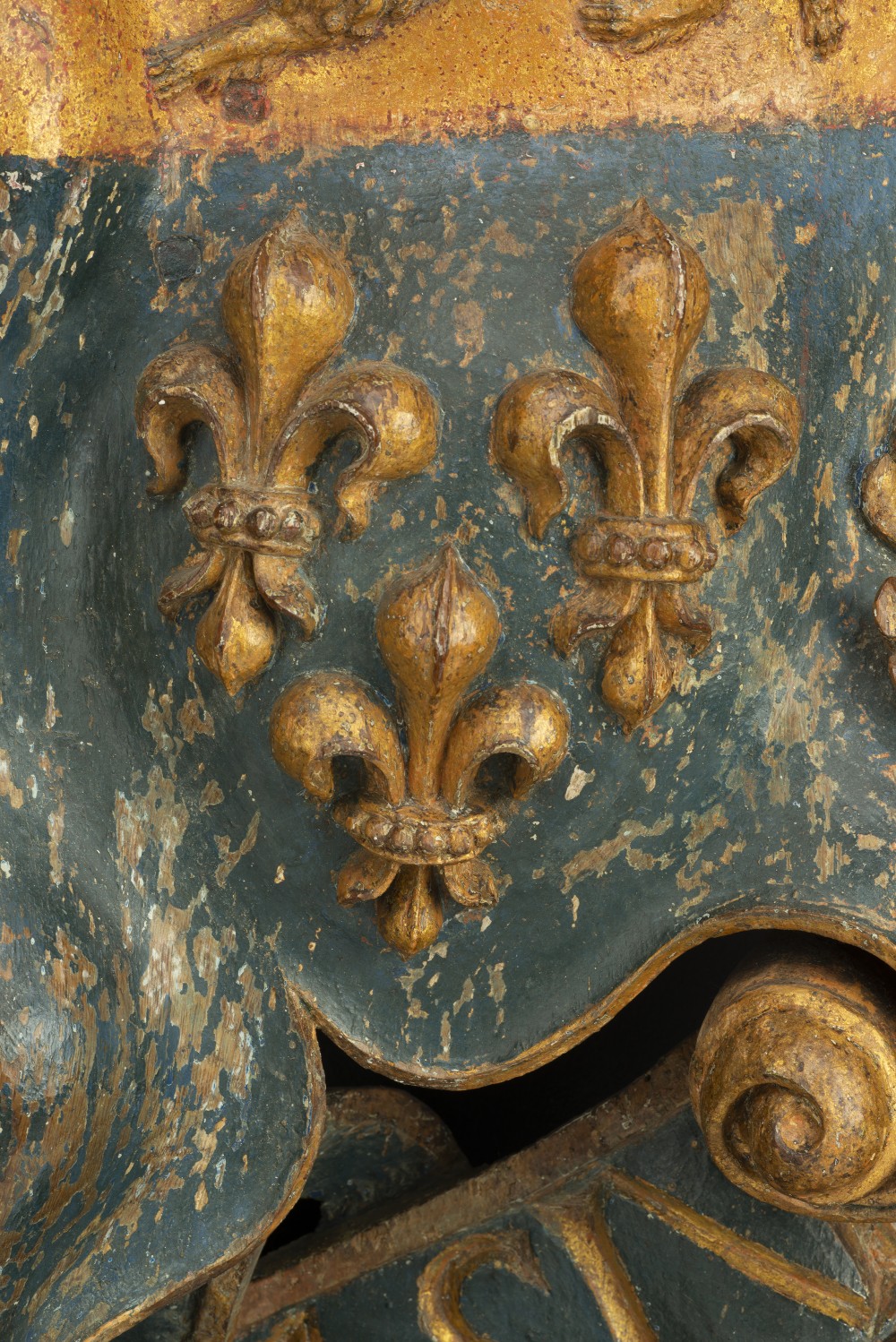 This wooden panel is very finely carved in a free and exuberant manner with, at its centre, a shield of rectangular form containing the royal arms of England which were used by King Henry VIII throughout his reign. These arms had been restored by King Edward IV, first in 1461 and again ten years later, and were used by successive monarchs thereafter, until being replaced in 1554 by Queen Mary I on her marriage to King Philip of Spain. They consist of four quarters; the upper left and lower right containing the three gold fleurs-de-lis of France on a blue ground, the upper right and lower left the three gold lions of England on a ground which would originally have been red.

At the bottom centre of the shield is a symmetrical scrolled finial of a form often found in Renaissance ornament. The shield overlays a garter carved as a belt of blue with a gilded buckle and gold borders and lettering. It carries the motto of the Most Noble Order of the Garter, England’s most senior knightly order, founded by King Edward III in 1348. The motto reads

This is clearly the original Middle French motto of the Order which is now consistently spelt; HONI SOIT QUI MAL Y PENSE (Shame on him who thinks evil of it), but at the time of the reign of Henry VIII spelling in most languages could still be variable, and there are other contemporary examples of the rendering of this motto which are equally wayward in their spelling. For example, on the brass garter stall plate of Sir Charles Brandon, 1st Duke of Suffolk and brother-in-law to Henry VIII, in St George’s Chapel, Windsor, the garter motto is spelt, HONY SOYT QVI MAL Y PENCE. Another example is within the spectacularly ornate carving of arms and mottos above the entrance of Hengrave Hall, near Bury St Edmunds, Suffolk, which was built for Sir Thomas Kitson between 1525 and 1538. Here the arms of Henry VIII are accompanied by the garter whose motto is spelt, HONI SOVET ϥVI MAL Y PANSE.

This panel is a finely carved and originally costly example of the nature of decoration regularly commissioned to decorate fine buildings in England during the first half of the 16th century. It almost certainly dates from the reign of King Henry VIII, still today Britain’s most memorable monarch, and was perhaps originally part of a decorative scheme for one of his own buildings or that of one of his notable and distinguished contemporaries.