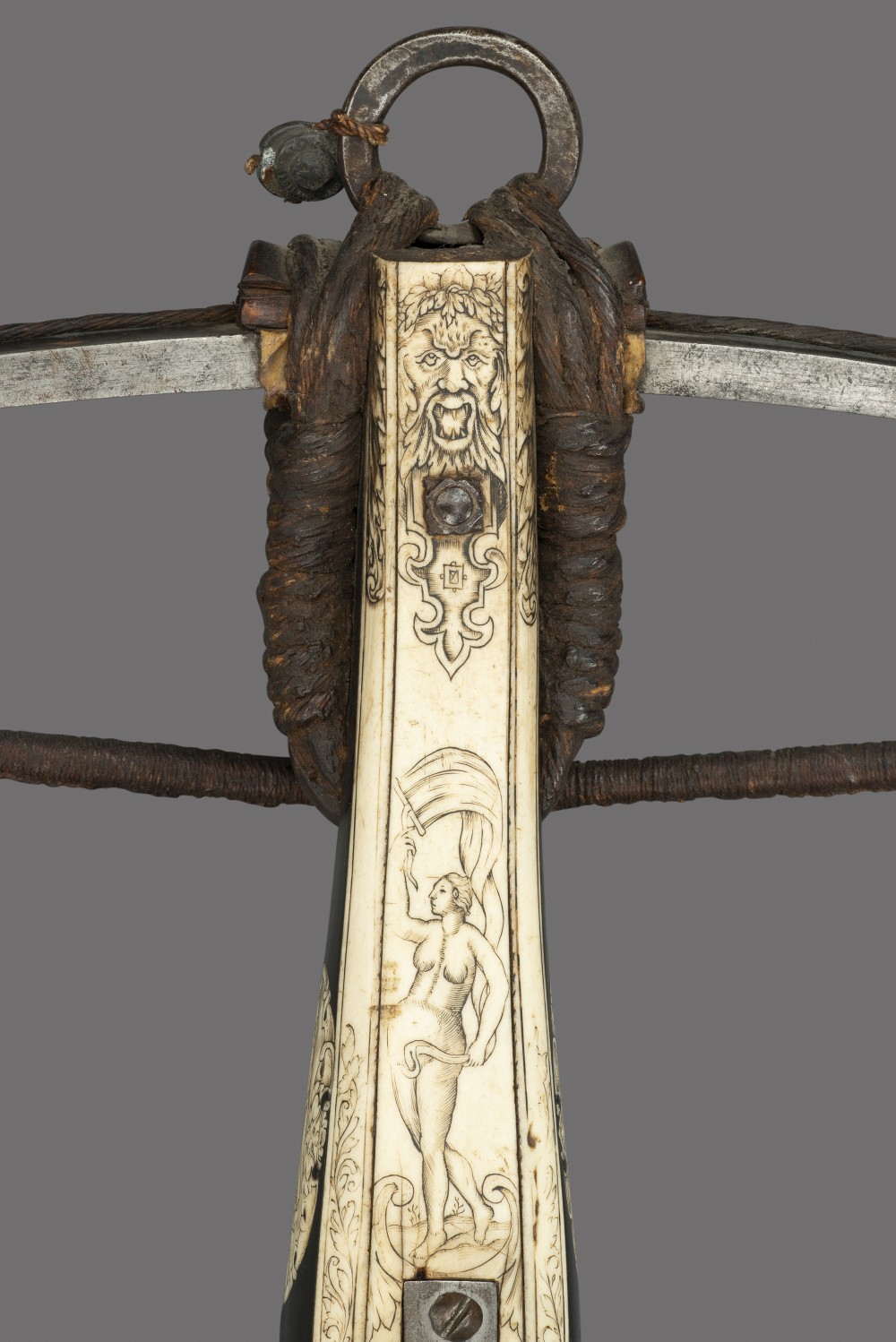 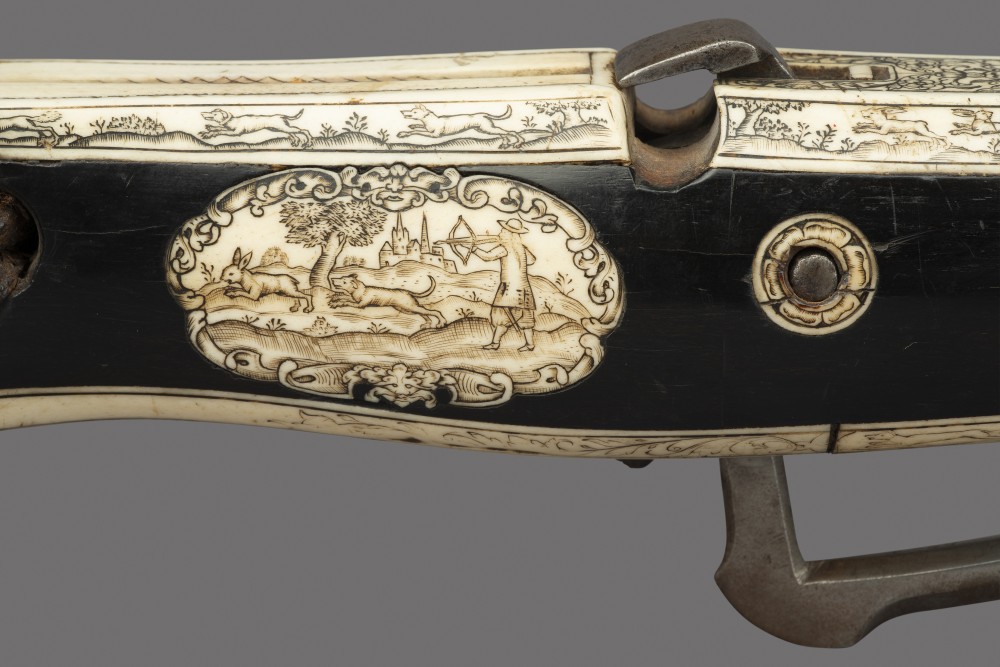 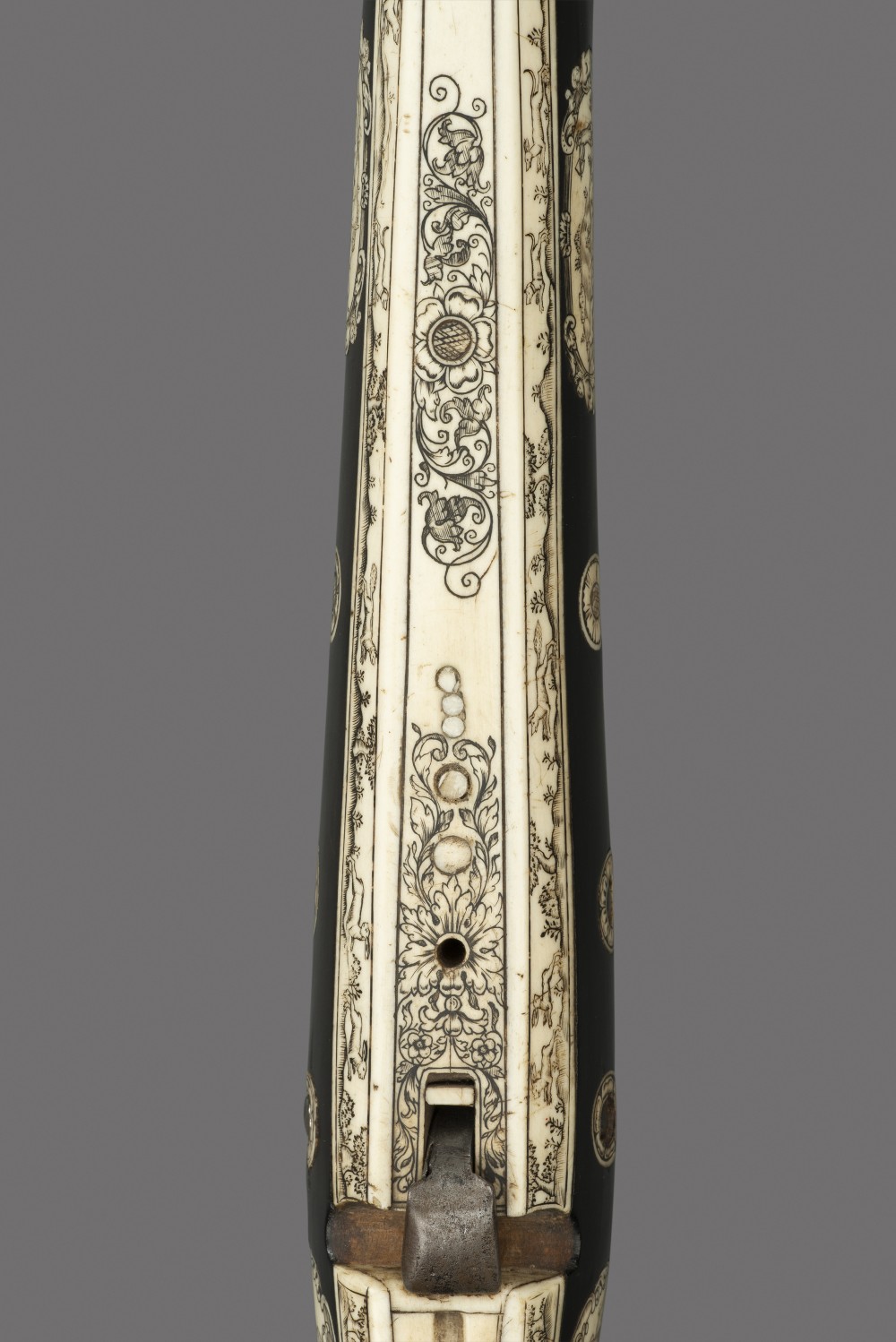 The sophistication and relative modernity of this crossbow are, excusably, initially concealed by the traditional demonic masks and the neoclassical personification of ‘Fortune’ both prominent within the engraved designs which enrich the tiller. In fact, it largely falls to the costume styling of the engraved sportsman figure to provide an indication of the period in which this crossbow was first used. Equal to the high quality of its engraved veneer and inlays, the striking feature of this crossbow is its incorporation of technical innovations which would have provided significant advantages to the sportsman. In the natural pursuit of increased reliability and ease of use, this crossbow has been upgraded by the fitting of a snap-lock mechanism with a set trigger, essentially the same type used on best firearms of the late 17th and 18th centuries. At its core, the addition of this type of mechanism eliminated the conventional necessity to re-set the mechanism for every cycle of use, by the laborious insertion of cocking-rods into various apertures in the tiller, by which means internal components could be pushed into their cocked position. Also, the powerful steel bow is spanned by a lightweight three-part lever, as a convenient alternative to the heavier and slower cranequin. Furthermore, the iron ‘nut’ now used to release the bowstring from its fully drawn position was again an improvement, pivoting on a robust steel pin it was obviously stronger and more reliable than the traditional notched bone disc revolving on cords.

Unlike the trigger systems for crossbows developed over the course of the 16th century, and mostly little changed circa 1630-50, the present improved system has triggers which do not fold, therefore making impossible the fitting of the cord loop which is inherent in securing the Germanic type of cranequin. Similarly, the present tiller also lacks the transverse steel lugs essential for fitting a cranequin. On the present tiller there are now decorative engraved horn rosettes inlaid on either side in place of these lugs. The sum of these technical innovations very much place this crossbow at the early transition between tradition and the technologically developed German birding crossbow of the 18th century.

The relatively light and compact proportions of this crossbow are referred to by the German term ‘Halbe Rüstung’. This indicates that it was a smaller bow intended for the lighter game animals, a fact borne out by the engravings of small deer, foxes and hares included within the horn veneers and plaques which ornament the tiller. Thankfully the absence of large game animals in the engraved decoration confirms that this bow was not used for the cruel pastime of the Kampfiagen, in which larger wild beasts were pitted in combat within an enclosure and goaded by spectators shooting crossbows.

This crossbow was included in the 1965 dispersal of antique arms from Castle (Burg) Feistritz in the town of Wechel, in the Neunkirchen district of Lower Austria. The castle is a massively imposing fortification most probably first dating from the mid-12th century, constructed as part of a chain of defences against eastern invasion. By the middle of the 17th century, the period in which this bow was constructed and first used, the castle was occupied by the von Rottal family, it having been bought in 1547 by Wilhelm, Freiherr von Rottal (d.1610).

In 1682 the castle was again sold, to Carl, Freiherr von Pergen. Under his occupation the castle remained unconquered by the Turks during their sweeping invasion of Lower Austria and consequential siege of Vienna in the following year. In 1766 the ownership of Feistritz Castle passed by marriage to Johann Baptiste, Graf Mitrowsky, the Chief Justice of Moravia. The castle changed hands again in 1815, sold to the wealthy industrialist Josef von Dietrich (later Baron von Dietrichsberg), who restored to the castle its magnificent collections of antique arms and furniture. On his death in 1858 the castle passed to his son-in-law, Prince Ludwig Sulkowski, thence was sold in 1922 to the banker Maximilian Mautner. Under his tenure the castle and its commensurate art collections were restored to their glorious baroque style of the 1670’s.

Mautner fled the Nazis in 1938, and the subsequent attempted plunder of the castle collections by Soviet troops in 1945 was bravely prevented by a single loyal servant. Restituted to Mautner in 1955, the castle was ultimately sold to the Austro-American industrialist Henry Reichold who took over in 1965, and in whose family's ownership it remains.