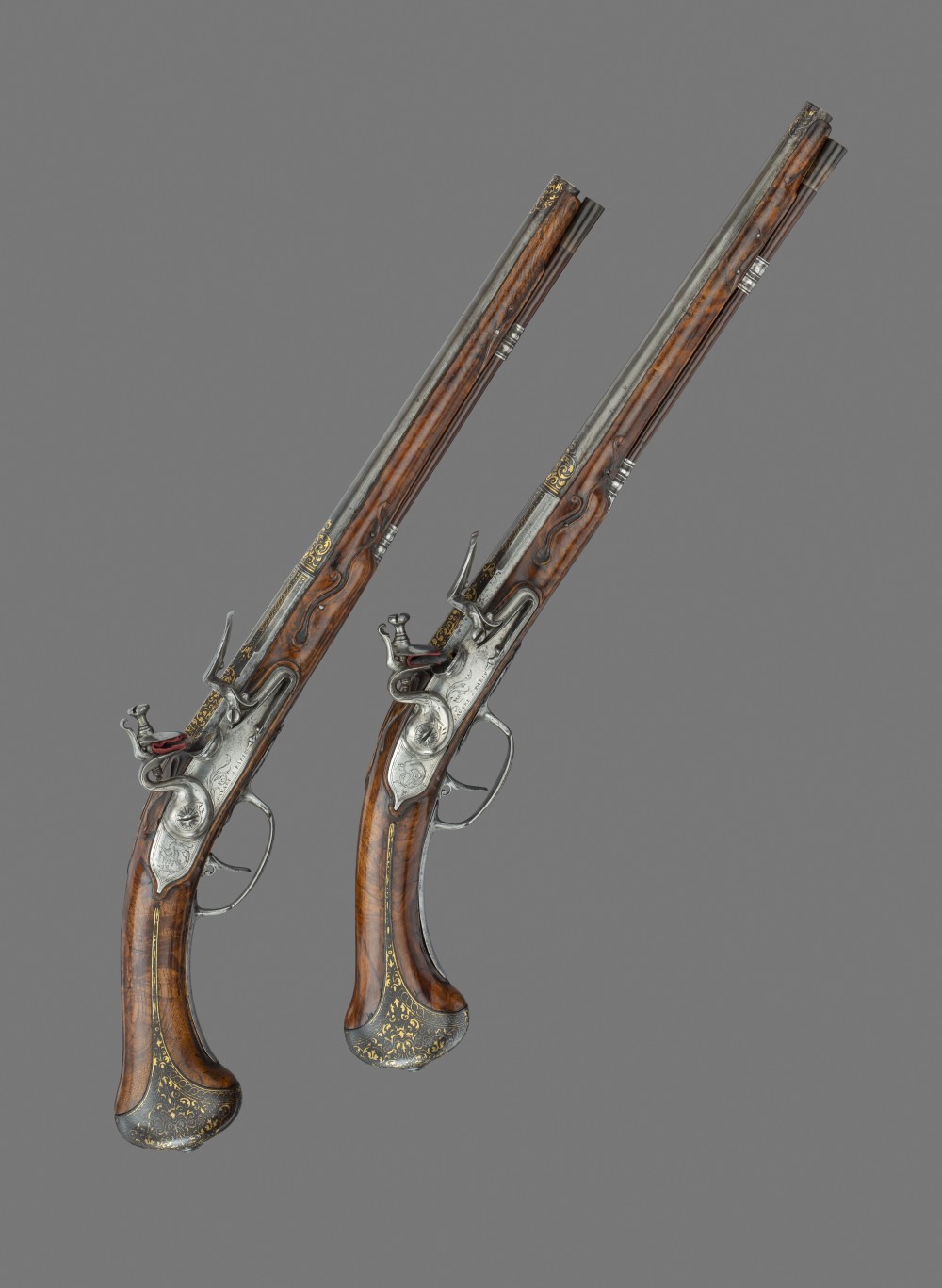 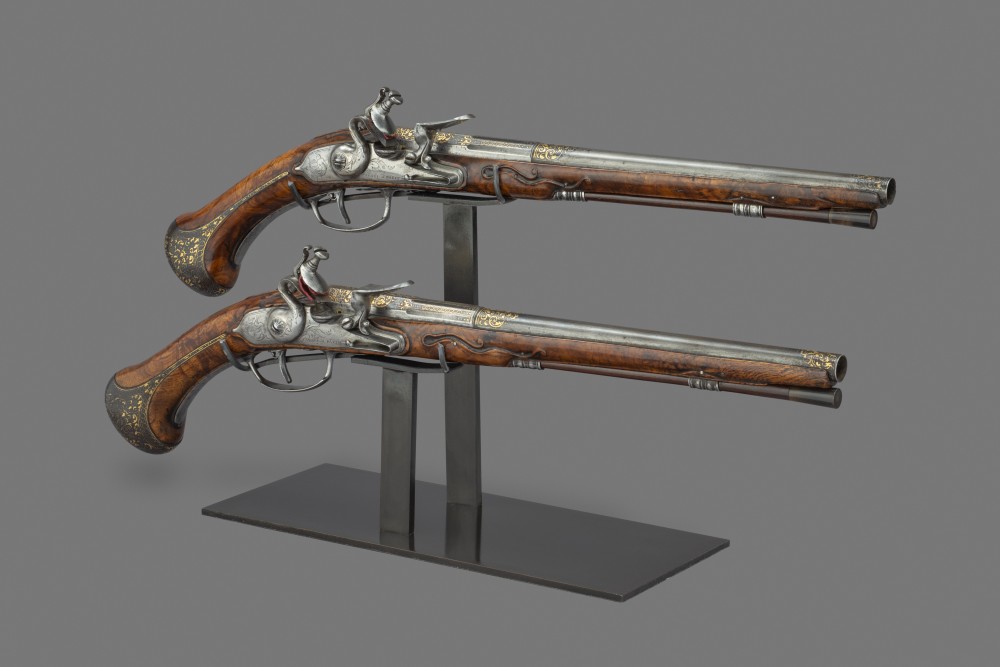 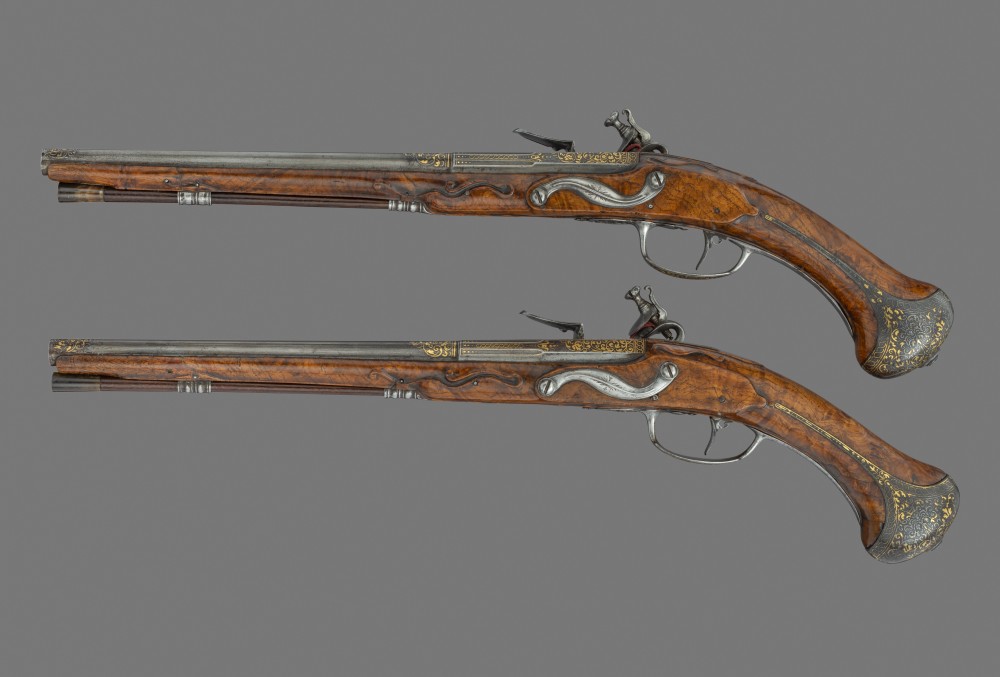 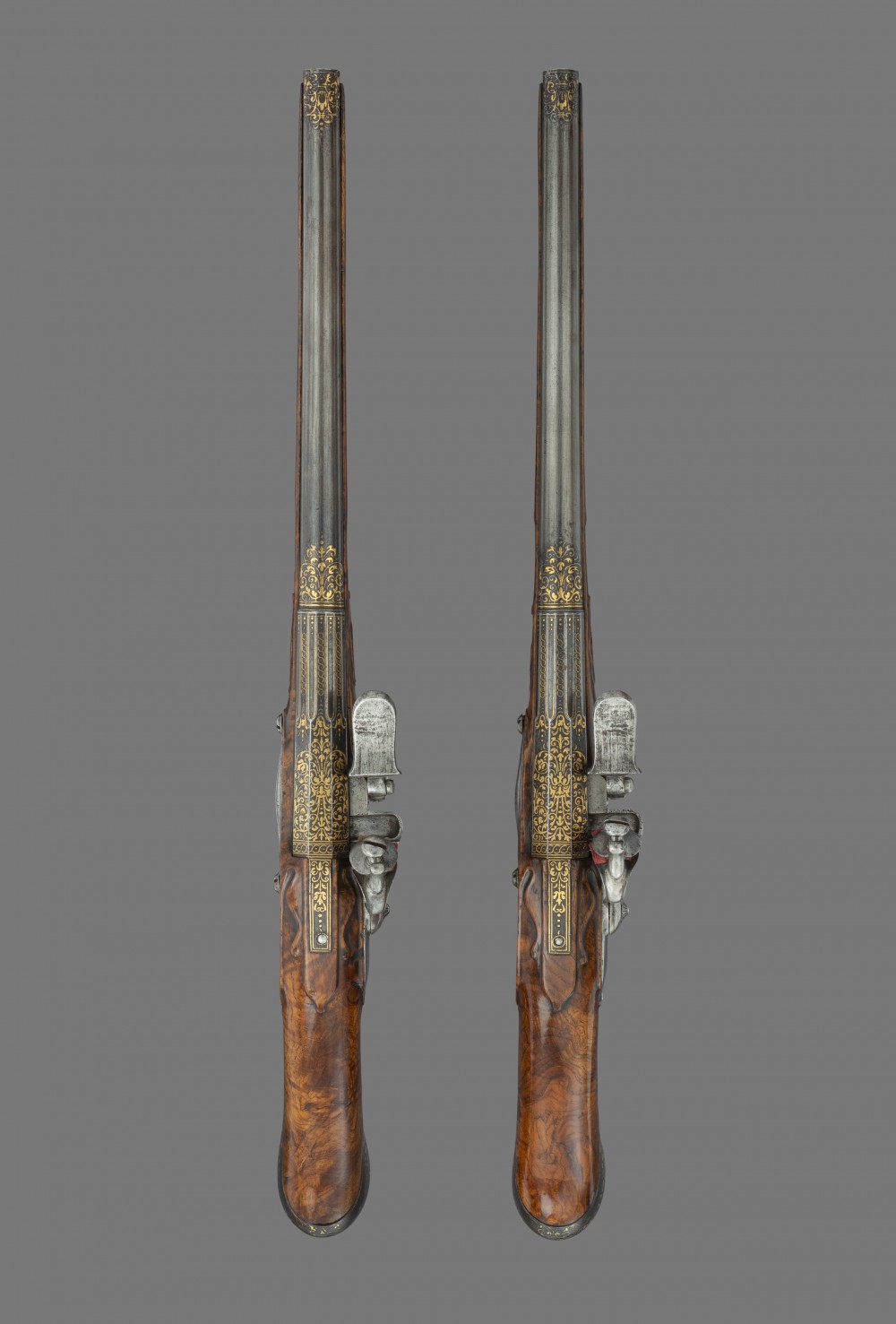 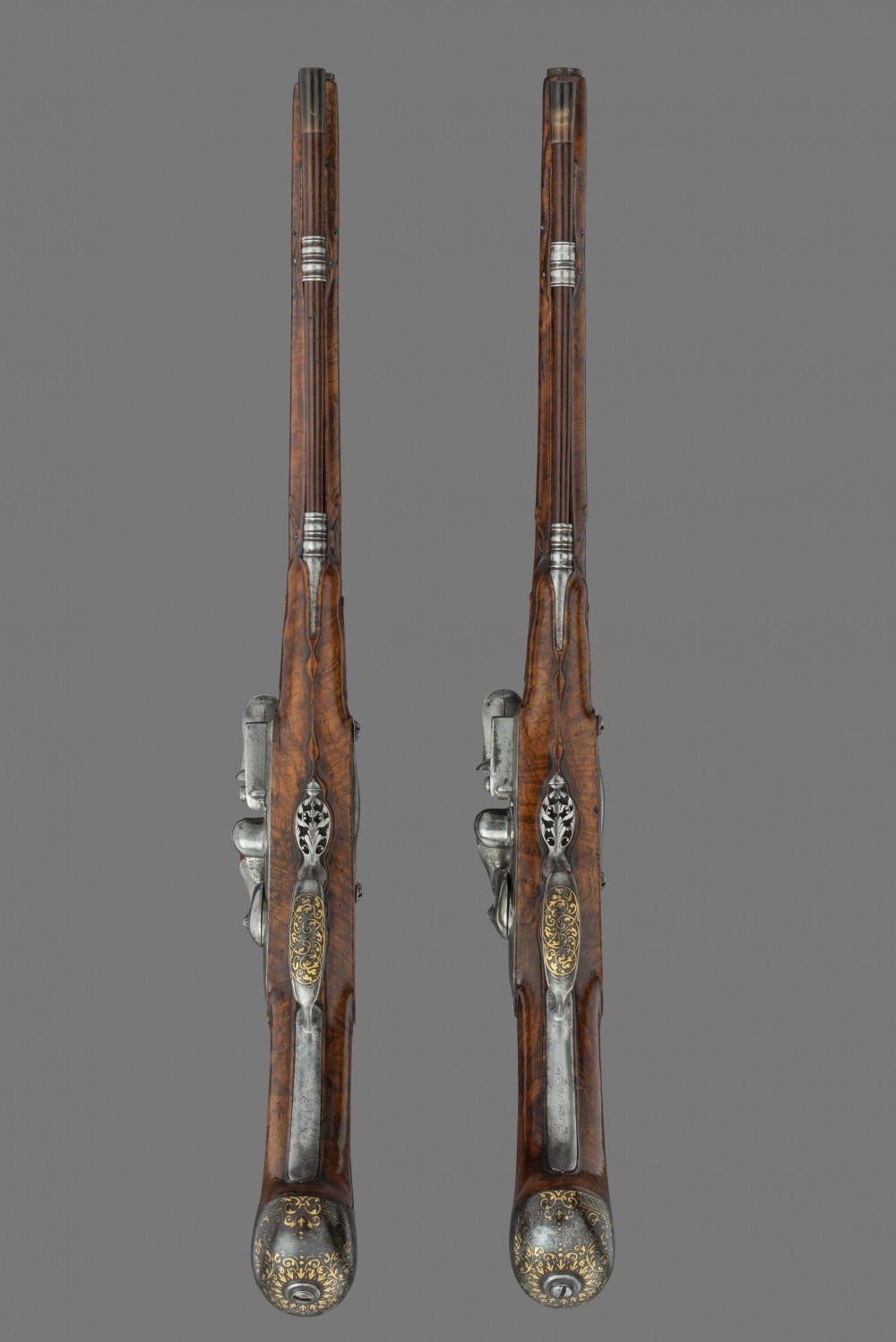 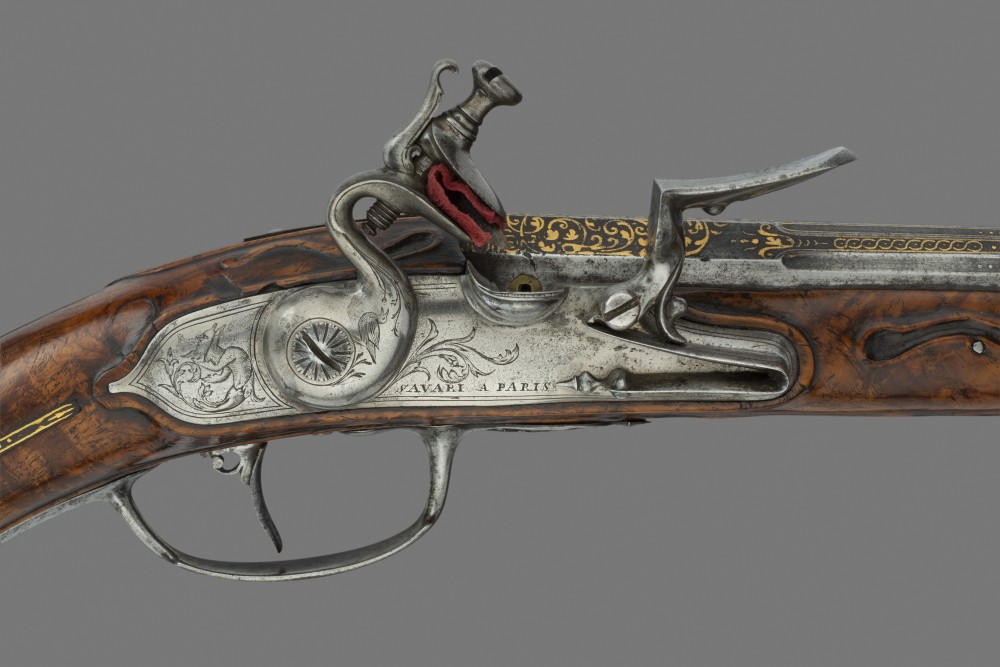 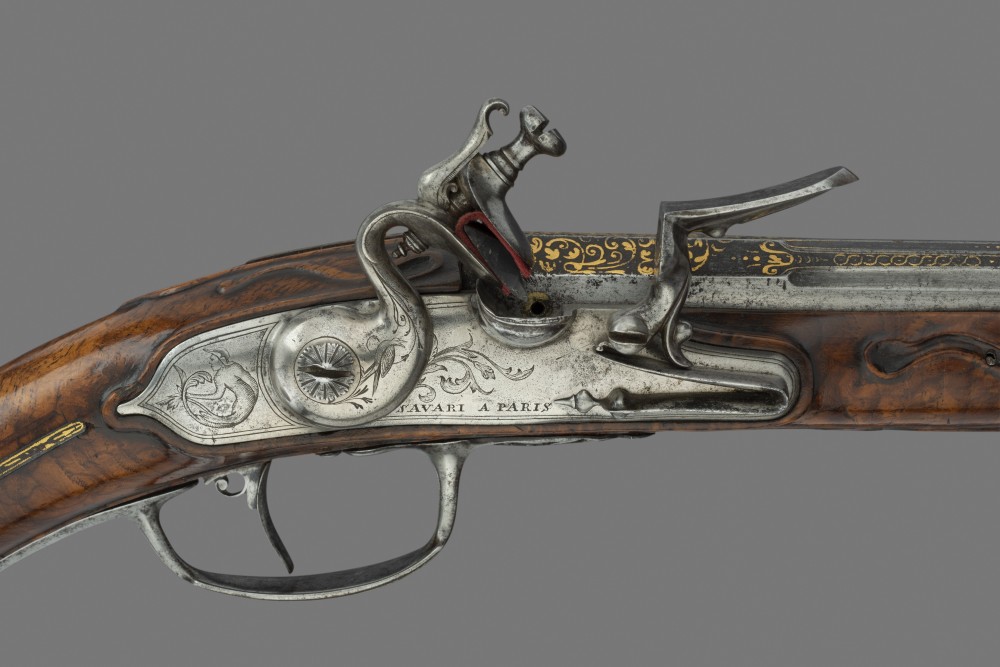 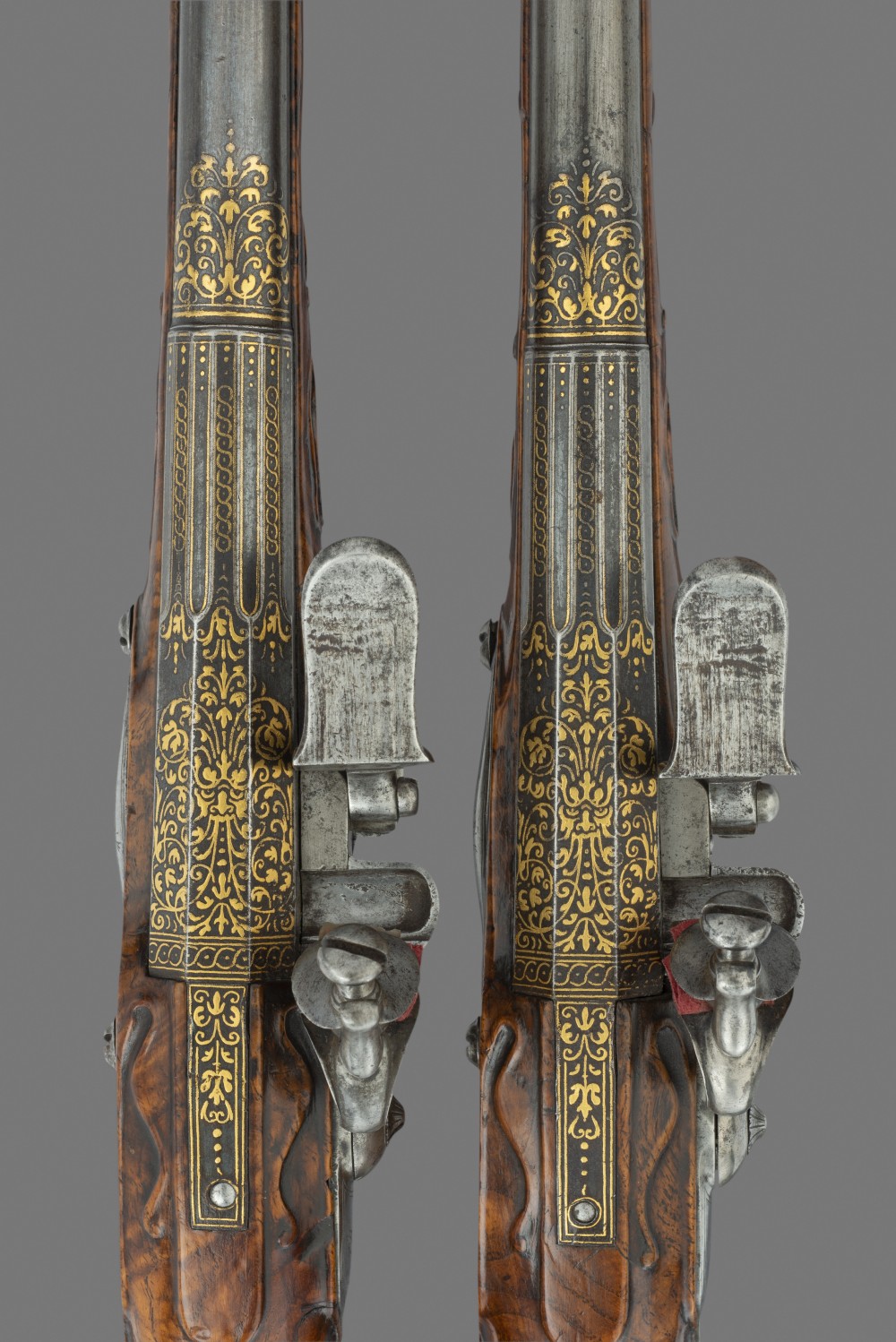 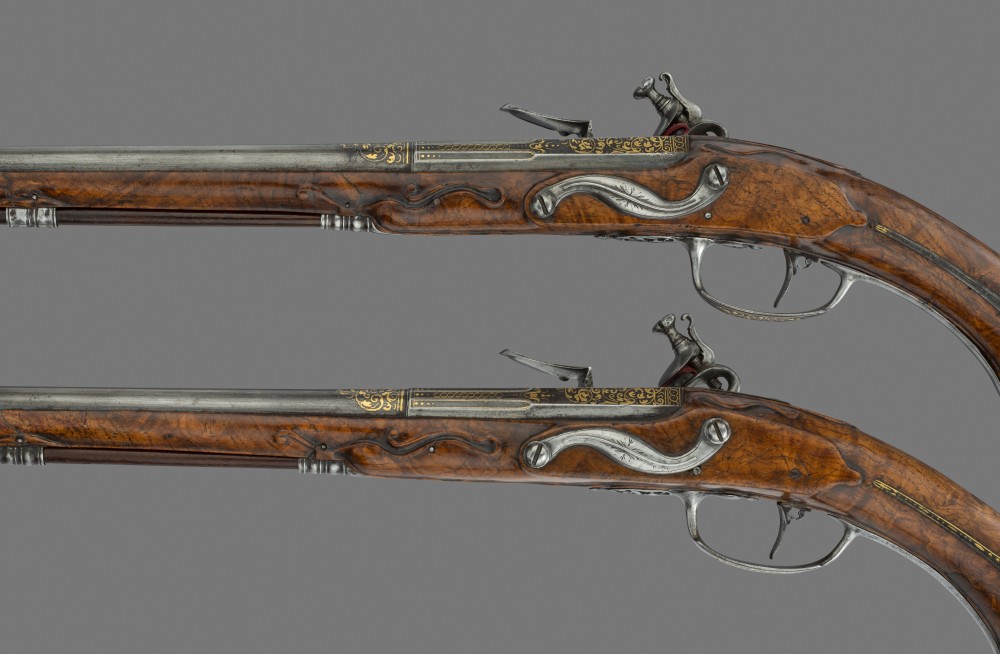 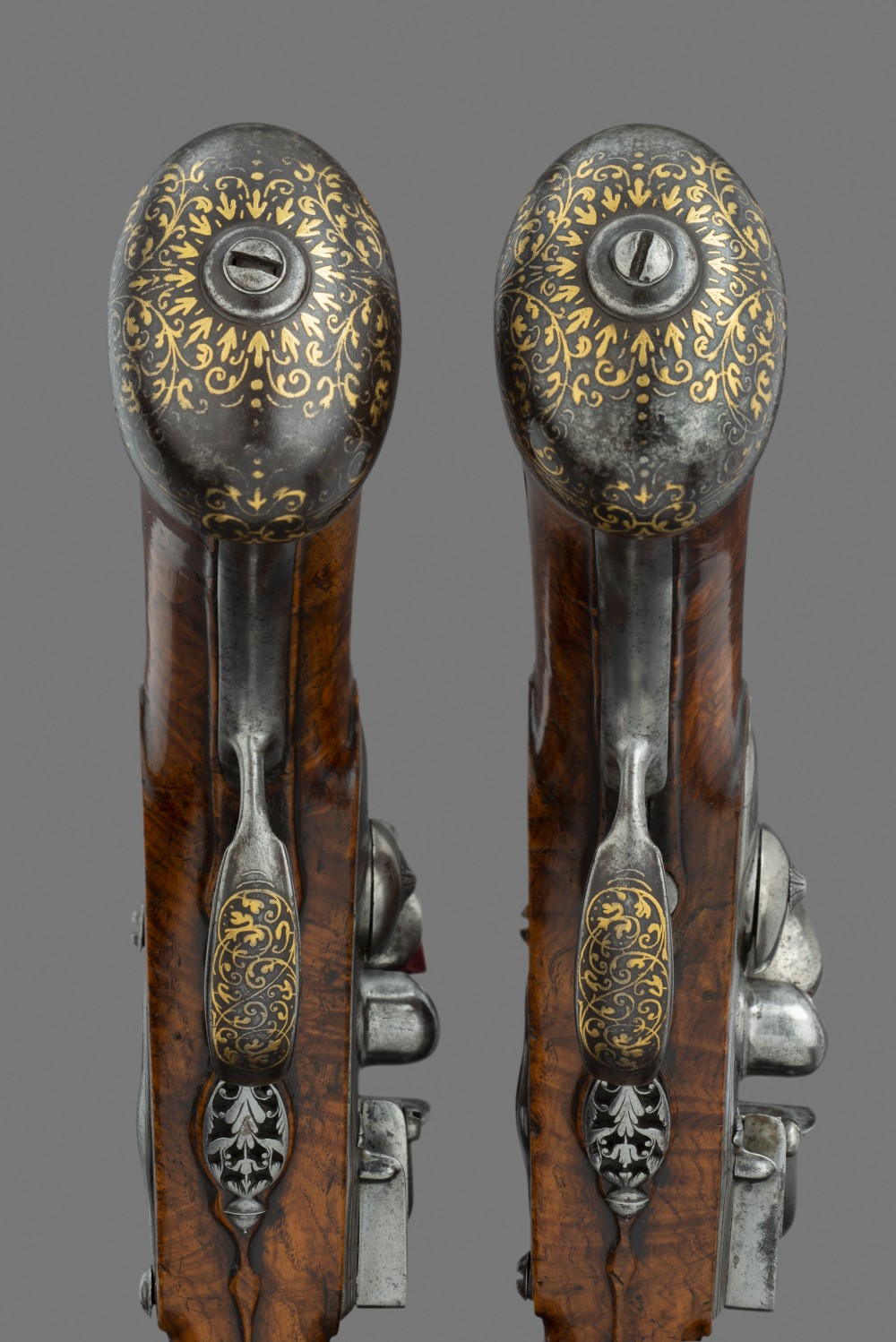 This pair of pistols forms a developmental bridge between the styles established within the reign of Louis XIII (d. 1643) and the innovations which emerged under the expanded patronage of the Louis XIV period of Paris gunmaking, most pointedly onward from circa 1665.

The barrels are forged in the style fashionable in the early Louis XIV era, with octagonal breeches changing to a short multi-faceted stage before continuing as rounded over their remaining length. Within this period also, the locks are no longer flat but are now rounded, terminating in a wide point. In the instance of the present pistols the locks come to a near-ogival point and the outer faces of the steels are each typically drawn-out to a small wart-like projection. The mounts are of rounded contour also, the pommels are now bulbous and extend to form long slender spurs, the side-plates have yet to evolve as the graphic forms of the 1680’s and the trigger-guard finials provide an element of pierced tracery ornament, retained from the French gunmaking tradition of the 1620’s – 40’s.

The present pistols are preserved in very fine condition, the barrels in particular retain the most of their original delicate gold-damascened ornament which contrasts with striking effect against the original blued steel surface. This damascened ornament provides further evidence of the stylistic transition in 17th century Paris gunmaking. In this manner the barrels are decorated with fine linear panels of guilloche and minute pellets over the multi-faceted stage of the barrels, a strong characteristic of the Louis XIV style. Conversely, the baroque bands of gold scrollwork are residual from the earlier period. These enclose the muzzles, the base of the forward stage and the breeches also, with a continuance over the tangs. The pommels and the bows of the trigger-guards are damascened to match, the blued ground of these mounts now naturally oxidised and rubbed. Throughout, the bands of gold scrollwork are formed of symmetrical arrangements of leafy tendrils, which are inspired by the original designs for the ornamentation of firearms published by Thomas Piquot in 1638. Note the detail of the demon masks from which the scrollwork issues over the breeches.

Piquot had been granted logement by the king in the highly prestigious Galeries du Louvre in 1636 and in 1638 was appointed ‘Keep of the King’s Globes’. His twenty sheets of firearms designs were published under a very lengthy title beginning ‘Livres de diverses Ordonnances de fevillages morseques …’ and became wide and lasting influence in French gunmaking.

The engraved decoration on the locks is in turn inspired by the designs for the ornamentation of firearms by the engraver and ornamentiste Jean Berain (1640-1711), the first series of which was published in 1659. Berain was certainly the most important influence across the wider range of decorative arts throughout the Louis XIV period. Typical of Berain, the locks of the present pistols are decorated with grotesque half-figures emerging from scrollwork tails; the figures differ over the respective locks, as do the exotic birds engraved on the cocks.

An interesting close comparison can be made between the designs for the grotesque half-figures at the rear of the lockplates and the figure occupying the same position on the lock of a gun by the royal gunmaker Bertrand Piraube. This gun was among the important gift of firearms presented by Louis XIV to Charles XI of Sweden in 1673 (Livrustkammaren inv. no. 1337).

The original stocks of the present pistols are fortunate to have survived, the short grain of the beautifully figured Grenoble walnut was prone to cracking in use, consequently many French stocks of this period were replaced by wood of straighter and less fragile grain. Typical of the period the stocks are carved with graceful relief mouldings, these developing to form undulating grooves about the barrel tangs and fore-ends.

Regrettably there is no published record of Savari as a gunmaker beyond references to this pair of pistols, this may well be due to the destruction of the original records of the city of Paris when the Hôtel de Ville (the City Hall, seat of administration) was burnt in the riots of the Commune in May 1871. In view of the quality of their gold-damascened decoration and the subtle grace of the carved moulded stocks it would certainly be surprising if these pistols are Savari’s only surviving work.