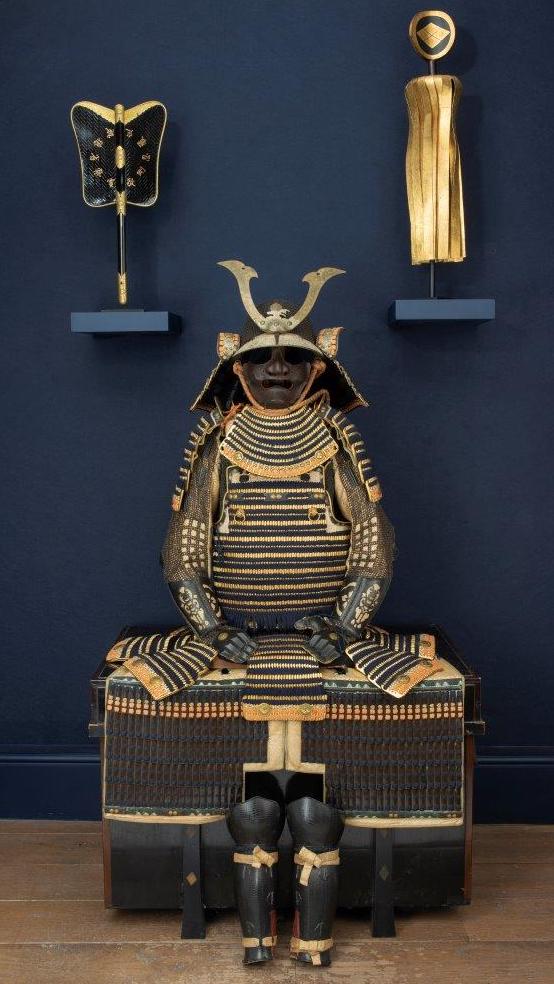 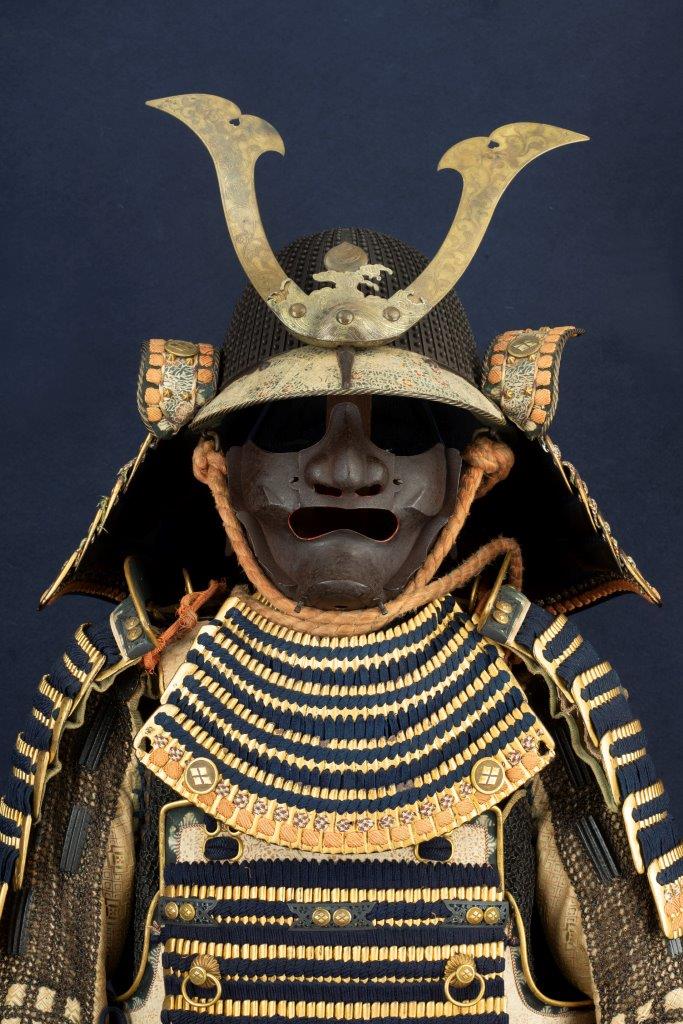 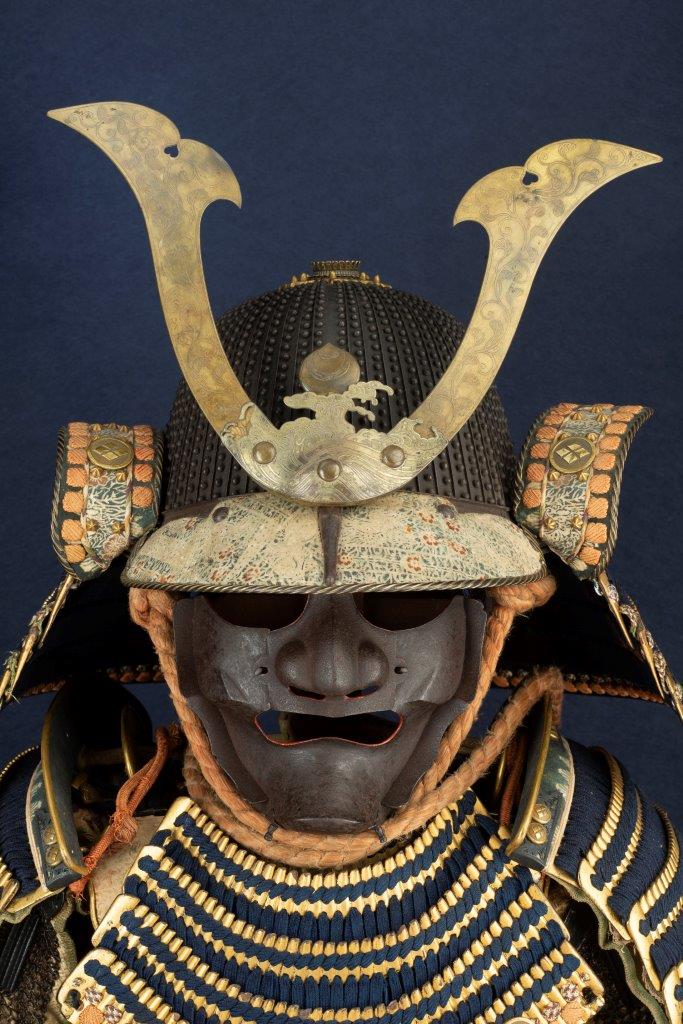 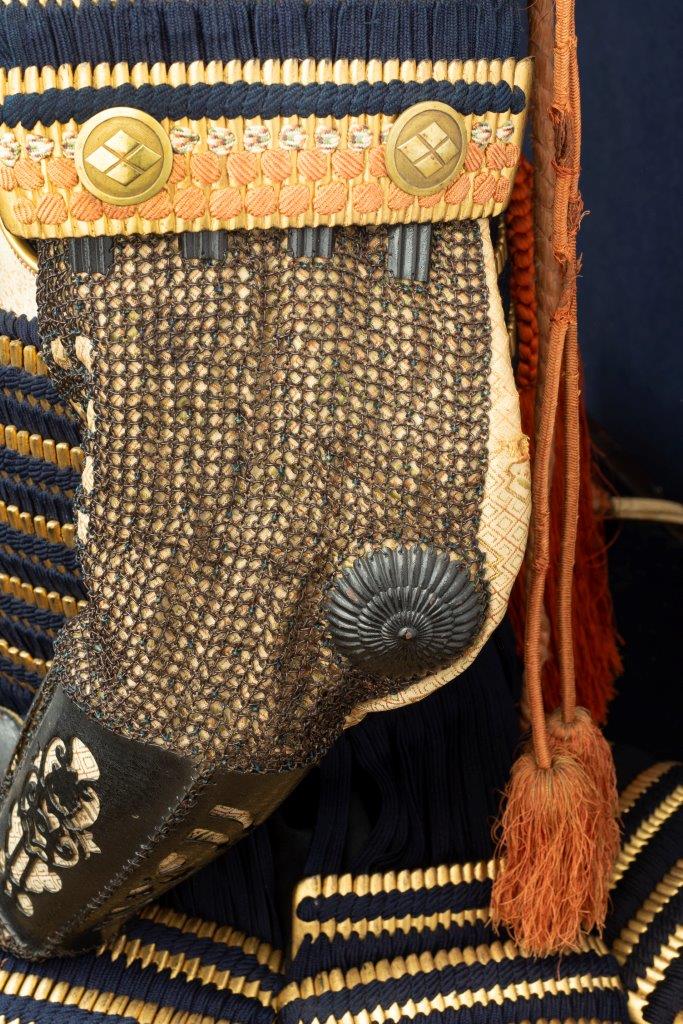 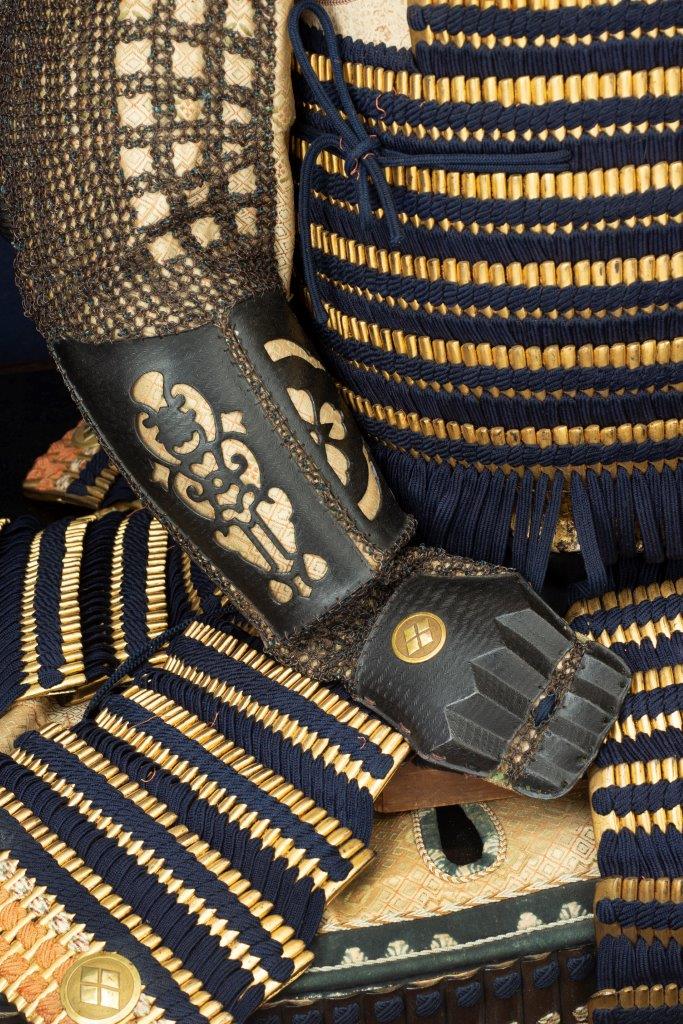 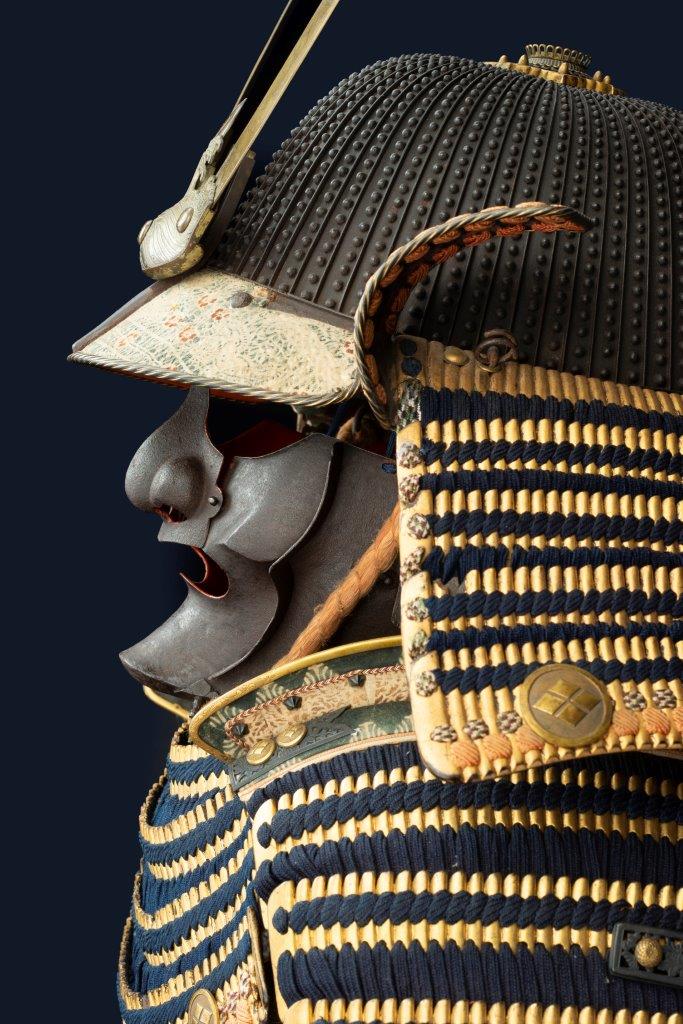 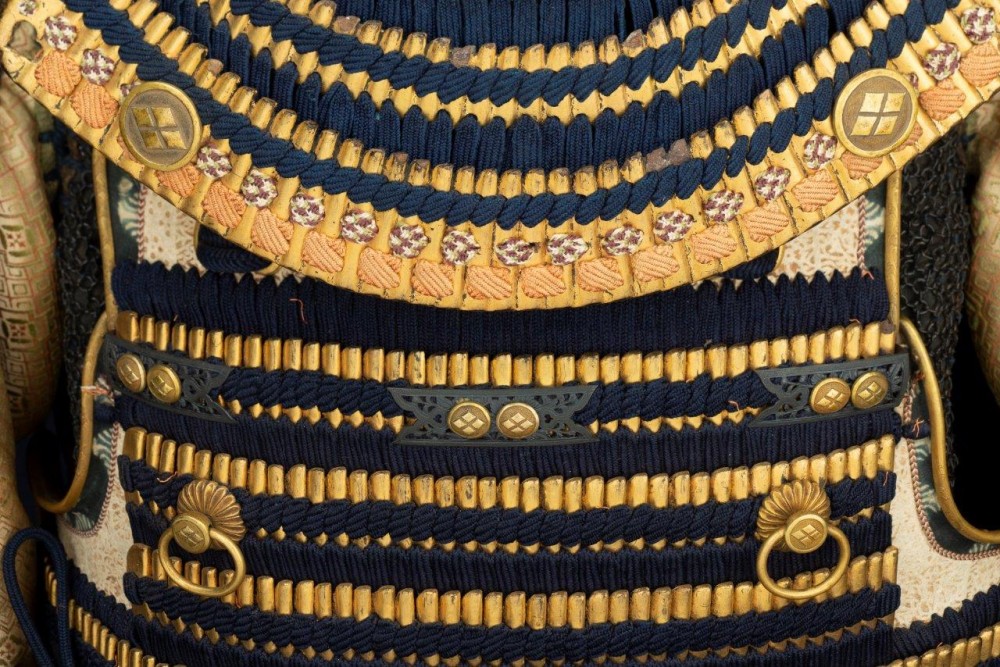 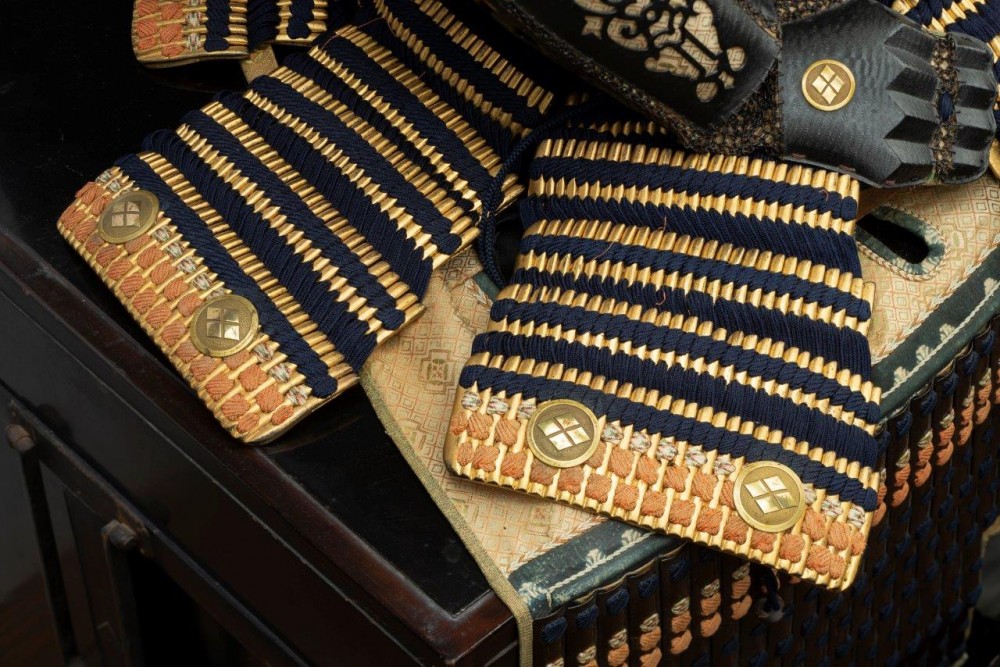 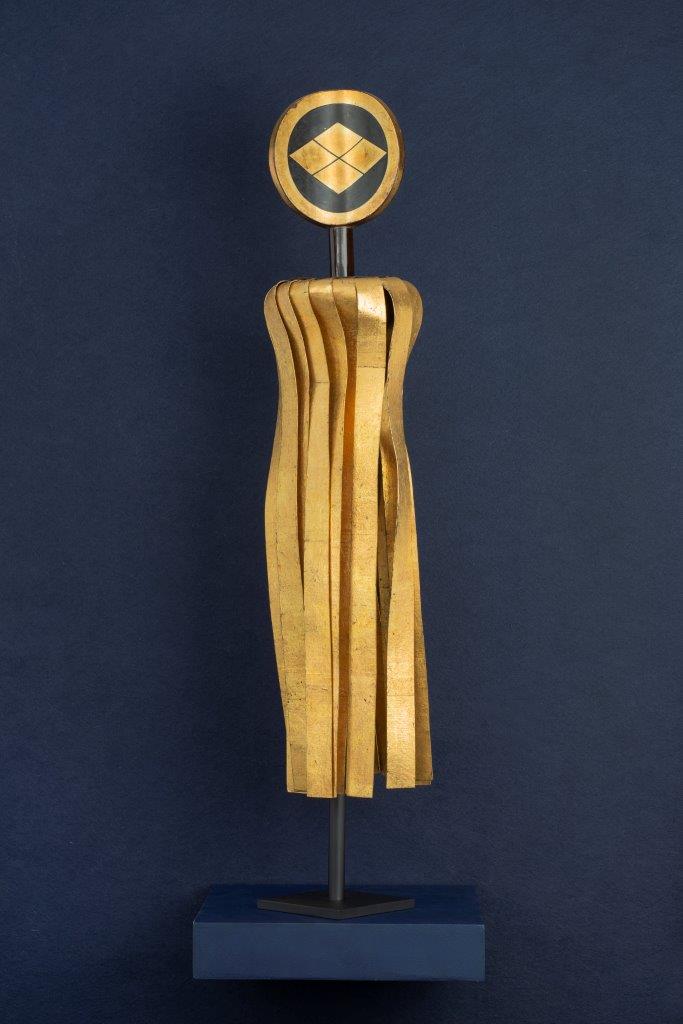 The armour mounted in the 18th century for the Matsumae clan

This armour comprises of a fine Saotome school russet iron 62 plate ko-boshi Kabuto and is signed inside on the rear plate “Saotome Ienao”. The Saotome were one of the most famous schools of armour smiths and were famed for the quality of their workmanship. Saotome Ienao lived in Hitachi province and worked from around 1620-1650. This ko-boshi (meaning small rivet) helmet is finished in russet iron and unlacquered to show the superb quality of the metalwork. Each triangular shaped plate in the helmet bowl is secured to the next with a row of 25 small standing rivets. The bowl is surmounted with a fine five stage tehen kanamono that is pierced and carved with arabesques. The closely fitting hineo-shikoro (neck guard) consists of 5 rows with two large fukigaeshi (front flanges). The fukigaeshi carry the diamond shaped hishi-gata Kamon (heraldic family crest) that was used by the powerful Matsumae clan. The front of the Kabuto is mounted with a large pair of gilt copper kuwagata (horns) and an impressive maedate (fore crest) depicting the tama (sacred Pearl) held aloft on waves.

The striking menpo (face armour) is made in the ryubu style (serene face) and is finished in unlacquered russet iron to show the fine workmanship. It has twoodayori (standing flanges) across the cheeks, the purpose of these was to protect the helmet tying cords, finally the Menpo is fitted with an impressive 5 lame yodare-kake (throat guard). The ni-mai Dò (cuirass) is made in two parts, fastening under the right arm with a hinge under the left arm. Again it is made from hon-kozane or individual scales laced together and lacquered gold. The shoulder straps are covered with small sections of armour called gyoyo, these like the Kabuto bear the hishi-gata kamon. Both the impressive tsubo-sode (shoulder guards) and gessan (hanging tassets) are also made from hon-kozane and like so many of the other elements in this armour are decorated with pierced metal plates called kanamono which carry the hishi-gata kamon The shino-kote (sleeves) and tsu-tsu suneate (shin guards) are both lacquered in a special combed technique called shibo-nuri which resembles waves. All the elements of the sangu, the shino-kote, Iyo-haidate and tsu-tsu suneate are backed with the same high quality silk brocade. The ensemble is finished off with an impressive gunbai (war fan) and uma-jirushi (battle standard) both displaying the diamond shaped hishi-gata kamon of the Matsumae clan.

The whole armour is laced in blue silk in the kebiki or closely spaced style, edged with decorative mimi-ito (multi coloured lace) and red hishinui (decorative cross-knots). All the components (yodare-kake, Dò, gessan and sode) are made from hon-kozane or individual plates that are lacquered and laced together. This technique of manufacture can be traced back the the Heian period (794-1185), lamellar armour made in this way was both flexible, light and strong. The only negative being it was very time consuming and therefore expensive to make. Hon-kozane only appears on the highest grade armours and was not mass produced.

The Matsumae clan (松前氏, Matsumae-shi) was a Japanese clan that was confirmed in the possession of the area around Matsumae, Hokkaidō as a march fief in 1590 by Toyotomi Hideyoshi, and charged with defending it, and by extension the whole of Japan, from the Ainu "barbarians" of the north. The clan, originally known as the Kakizaki clan (蠣崎氏), had settled in Kakizaki, Kawauchi, Mutsu on the Shimokita Peninsula. Claiming descent from the Takeda clan of Wakasa Province, the family later took the name Matsumae.