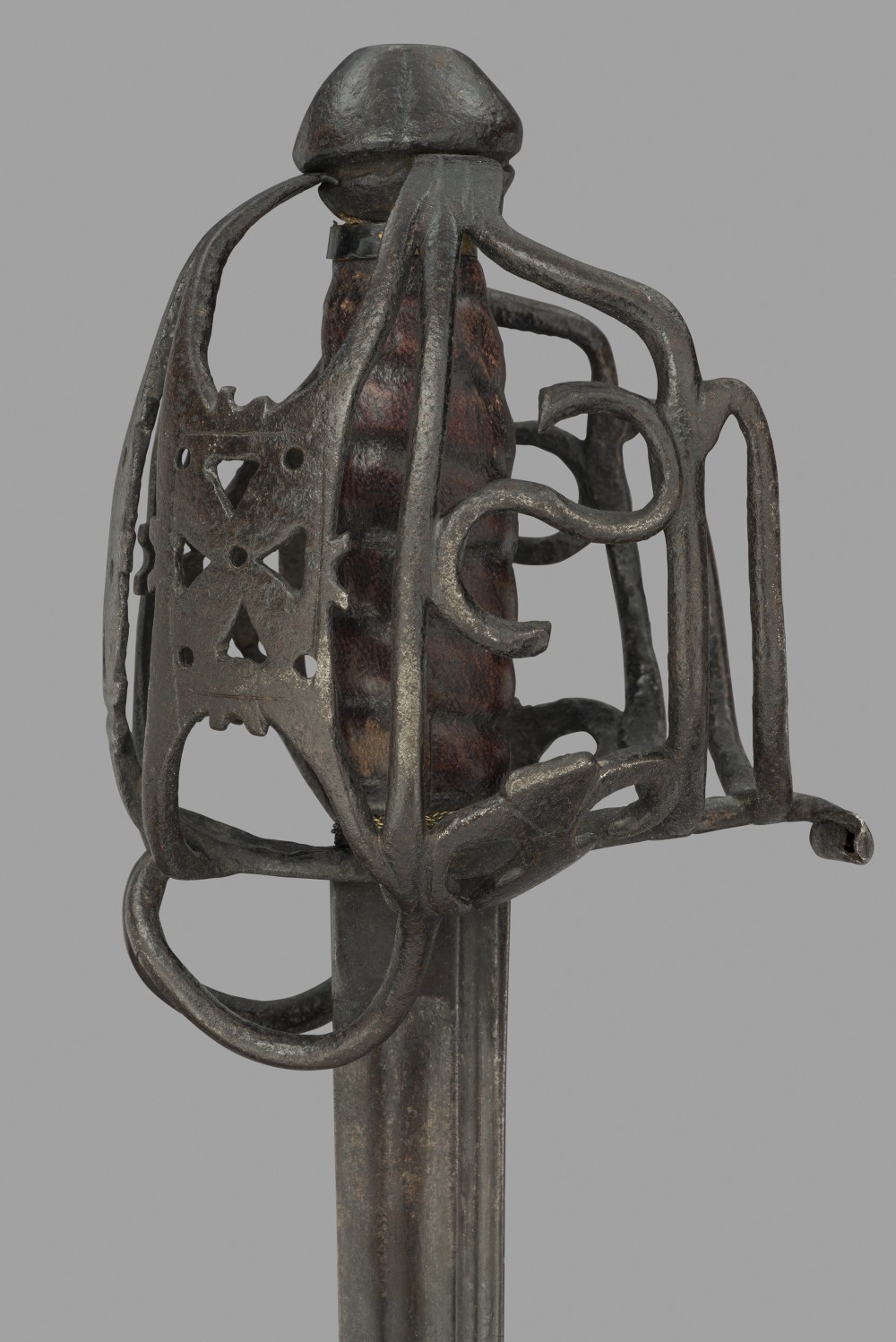 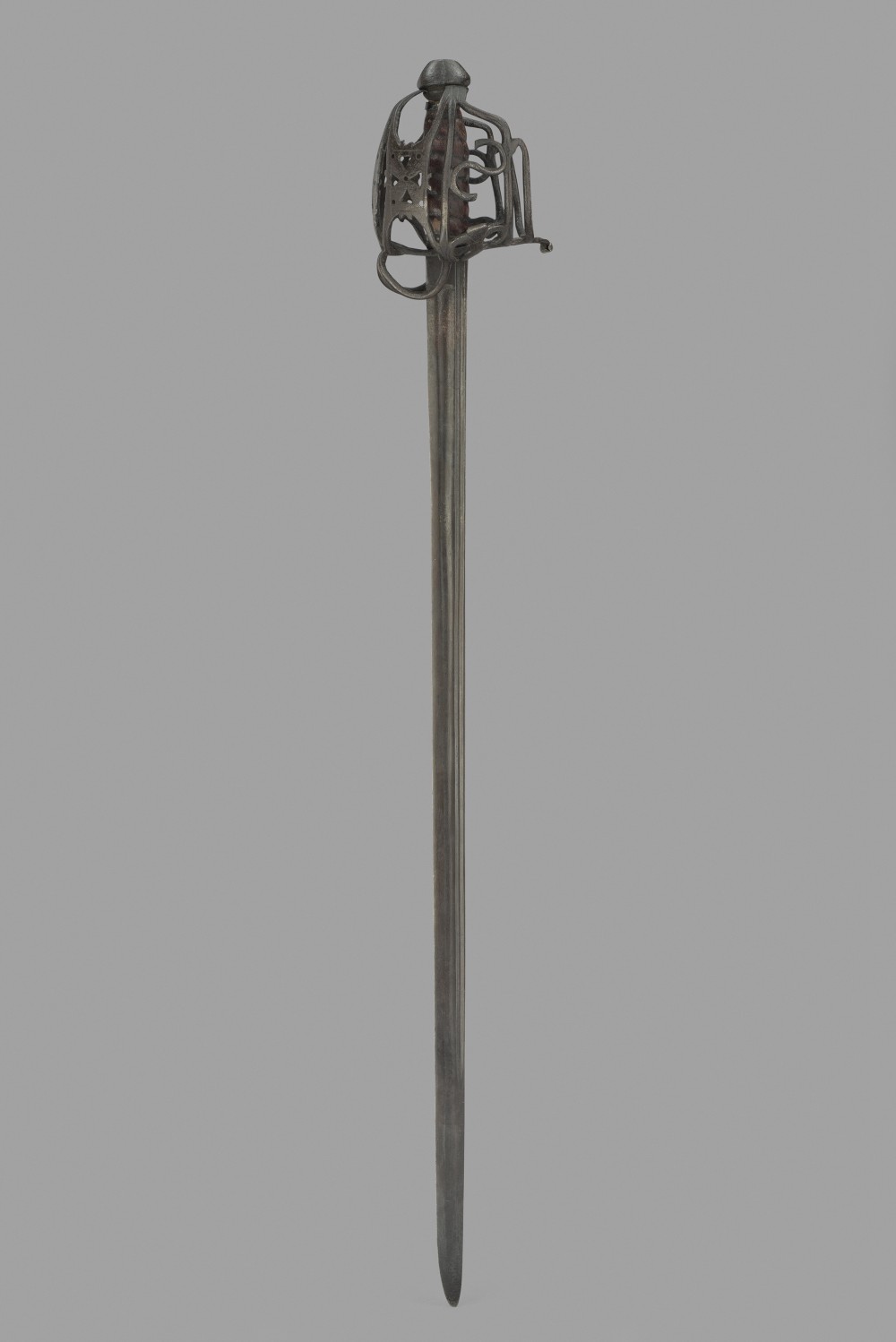 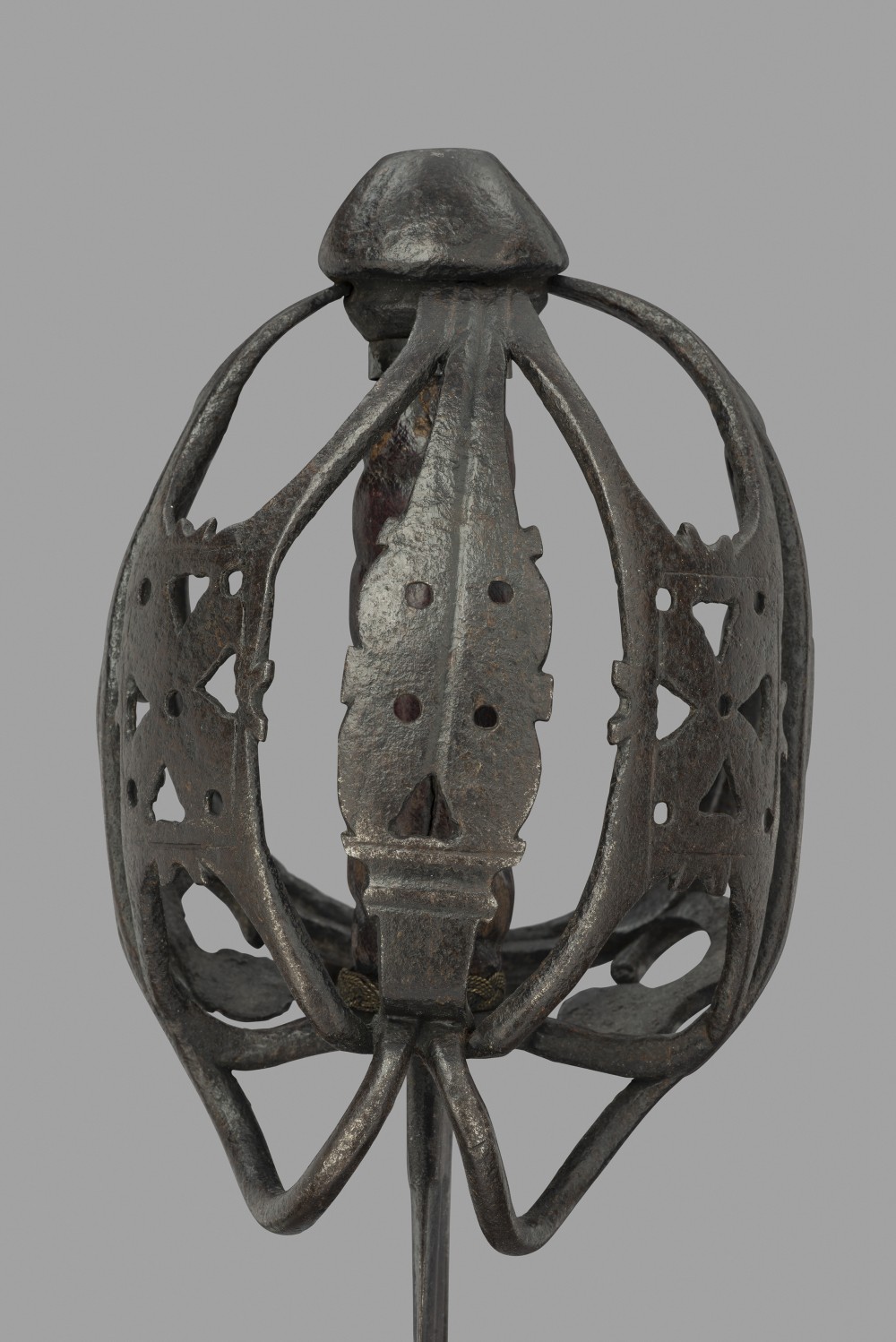 In its form and construction the iron hilt of this sword conforms very well to that established for the majority Scottish basket hilts by the early years of the 18th century. It is made of circular-section bars supporting pierced panels, or shields. The knuckle guard has cusped edges and is pierced with four circular holes and an inverted heart-shape. It is flanked by rectangular shields which are each at the centre of saltire bars and are pierced with four heart-shapes arranged with their points toward a central circular hole, with four more circular holes, one at each corner. This hilt is distinctive, however, in having the area between its side knuckle guards and rear guards occupied by an S-shaped bar instead of a similarly shaped pierced shield to those flanking the knuckle guard. At the end adjacent to the blade both the areas occupied by S-bars have a feature of fleur-de-lis or ‘ram’s-horn’ form, something which is also usually found when a more conventional pierced shield is present. Although the S-shaped bars make this hilt distinctive their presence is not an especially rare feature among Scottish basket hilts of this period. Various suggestions have been made that the ‘S’ represents Scotland, or Stirling, or even perhaps Stuart. The pommel is of typical double-conical form and has a circumferential groove to provide a lodging point for the three groups of bars of the hilt which meet it. The original wooden grip is of a spiral form and has a sheet copper alloy ferrule at its upper end and a twisted wire ‘turk’s head’ enclosing the other. The single-edged blade has a broad rounded fuller along its centre line which ends close to the tip, while a narrower, more sharply defined one follows the back edge until it meets a relatively short false-edge. Although neither its hilt nor its blade appears to bear makers’ marks the sword is a well-made weapon and a fine example of those which were carried by Highlanders throughout the turbulent period of Scotland’s Jacobite rebellions in the first half of the 18th Century.

Two swords with the same feature of S-shaped bars within the hilt were included in the catalogue of Culloden: The Sword and the Sorrows, an exhibition hosted by the National Trust for Scotland at the Visitor Centre, Drumossie Moor, 16th April to the 20th September, 1996, to commemorate the Jacobite Rising of 1745 and the Battle of Culloden, 1746. (See p.36, items 1:29 and 1:30.)