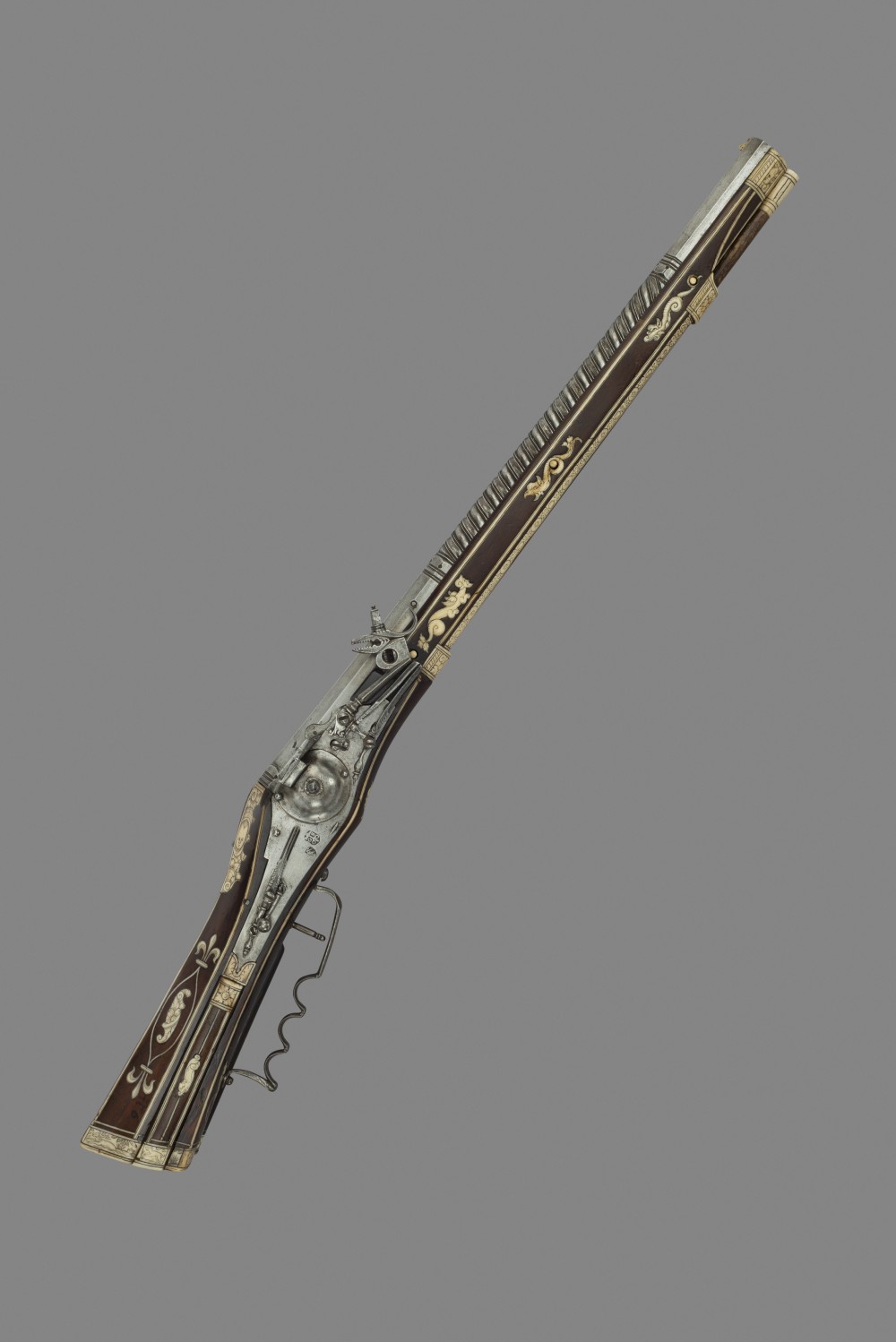 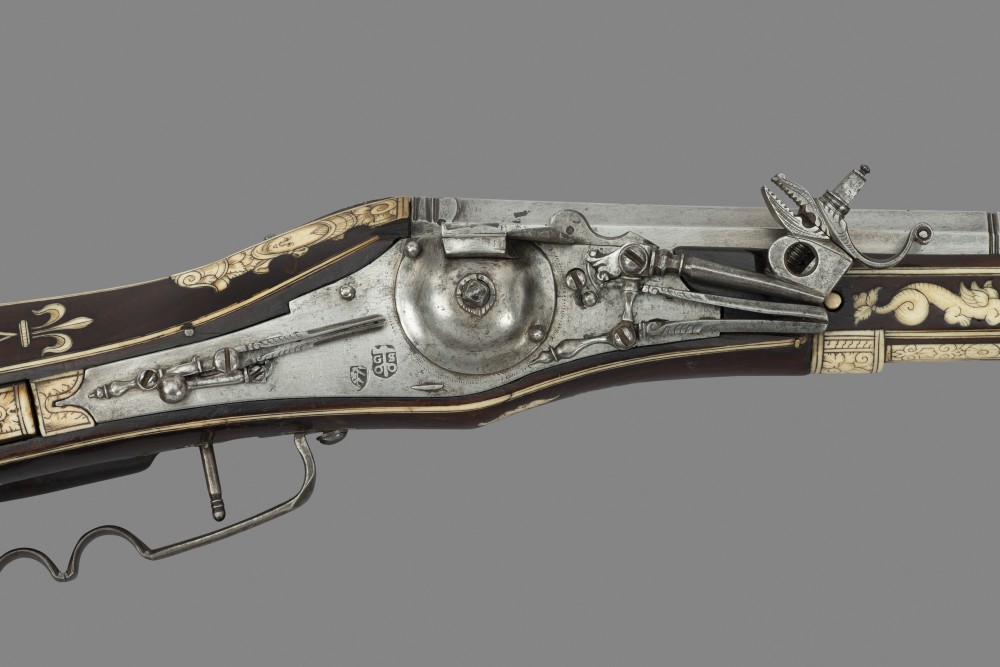 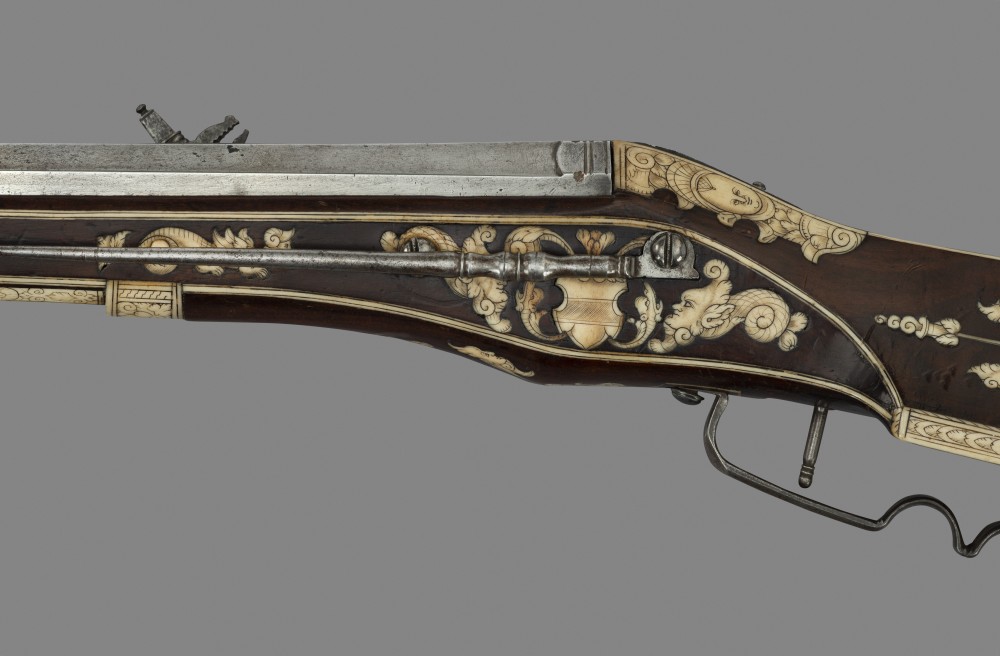 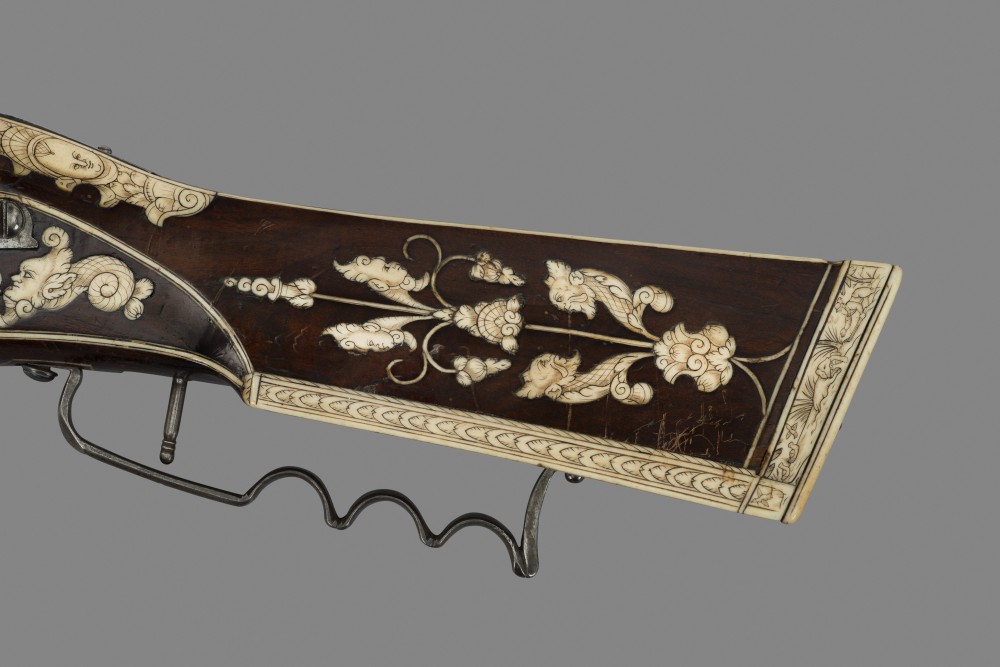 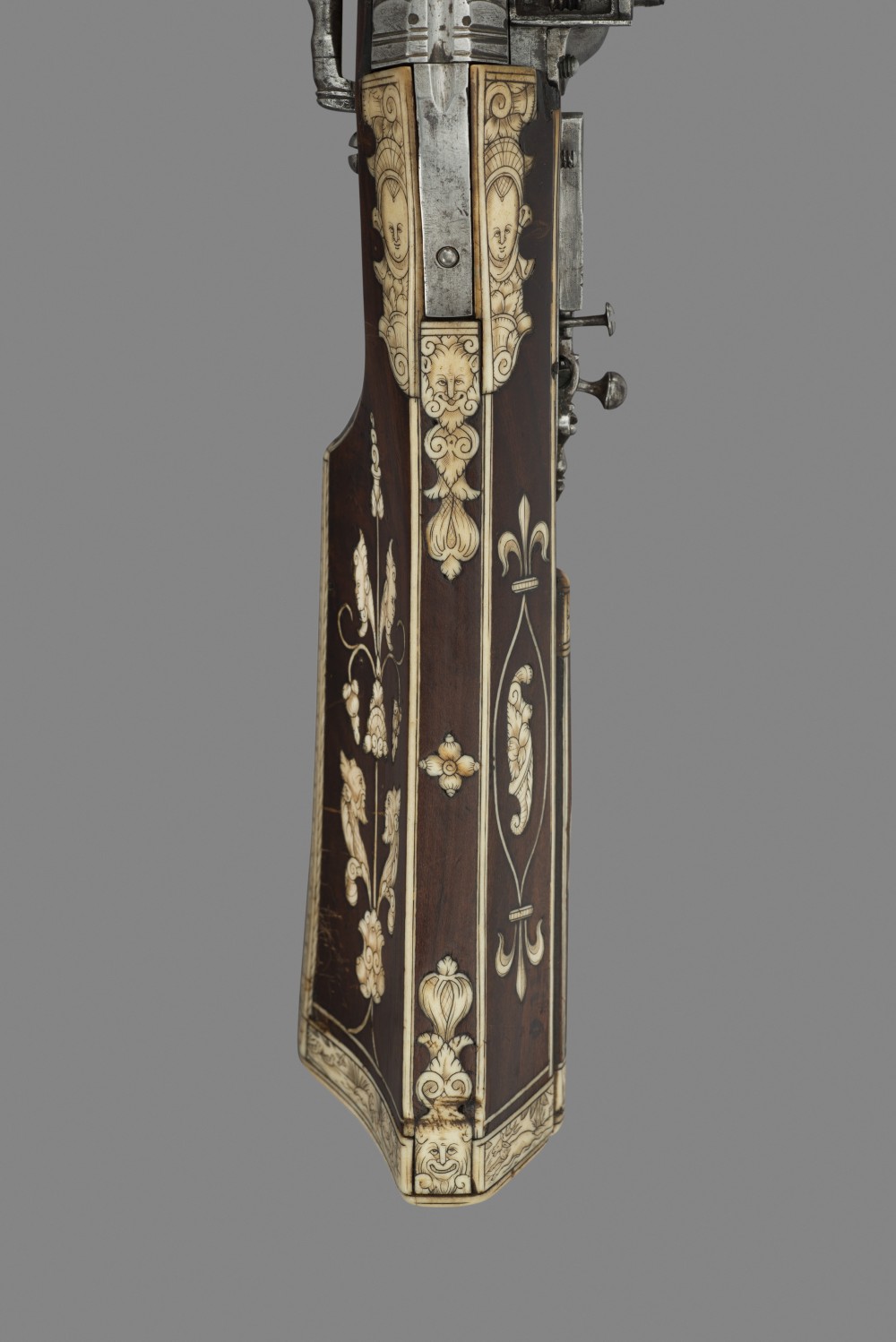 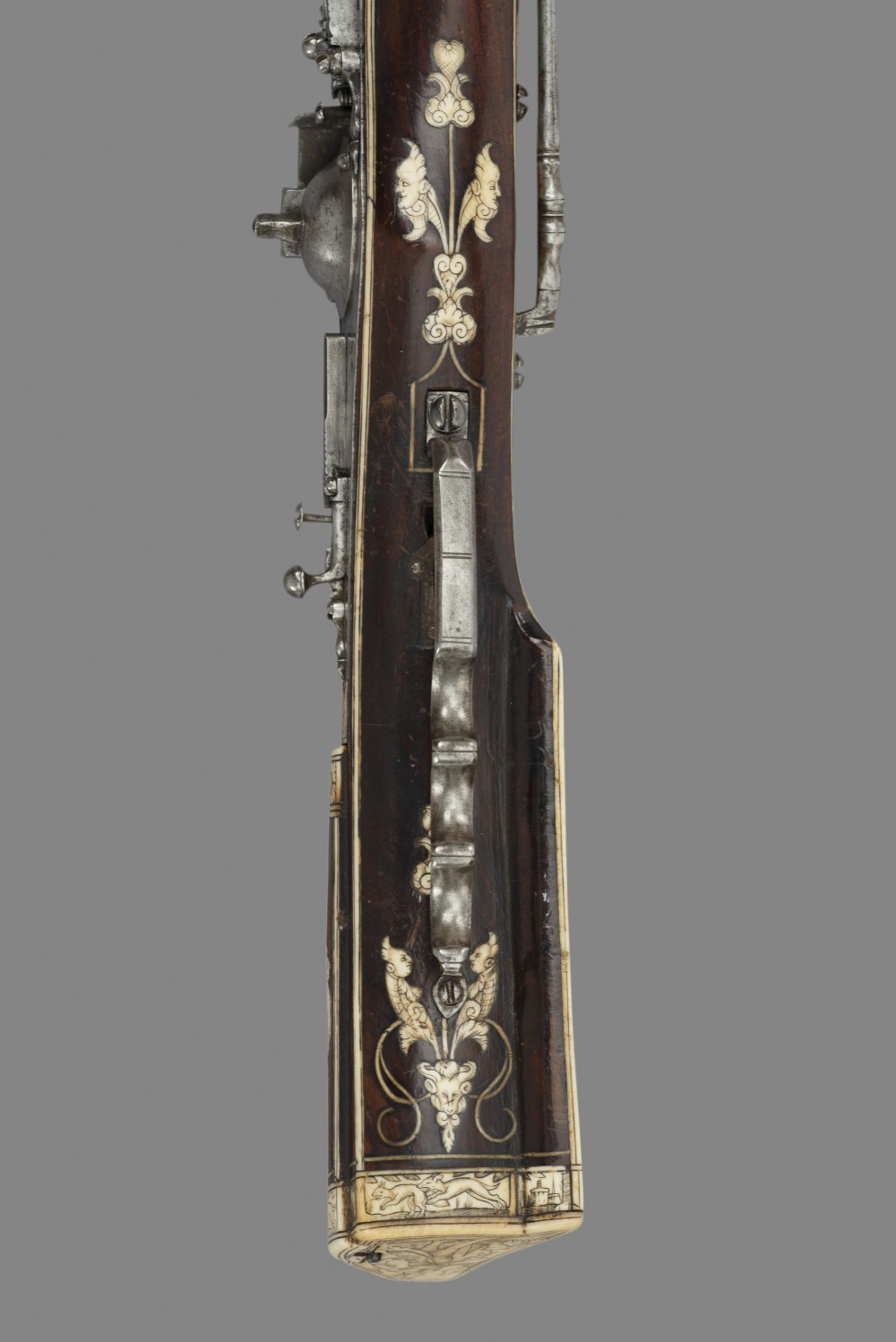 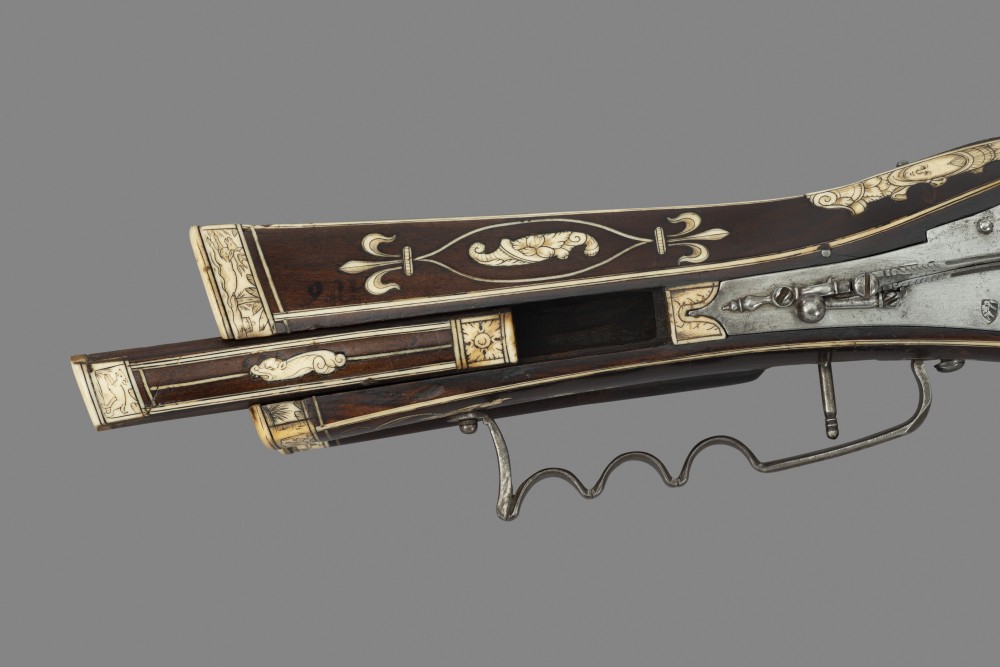 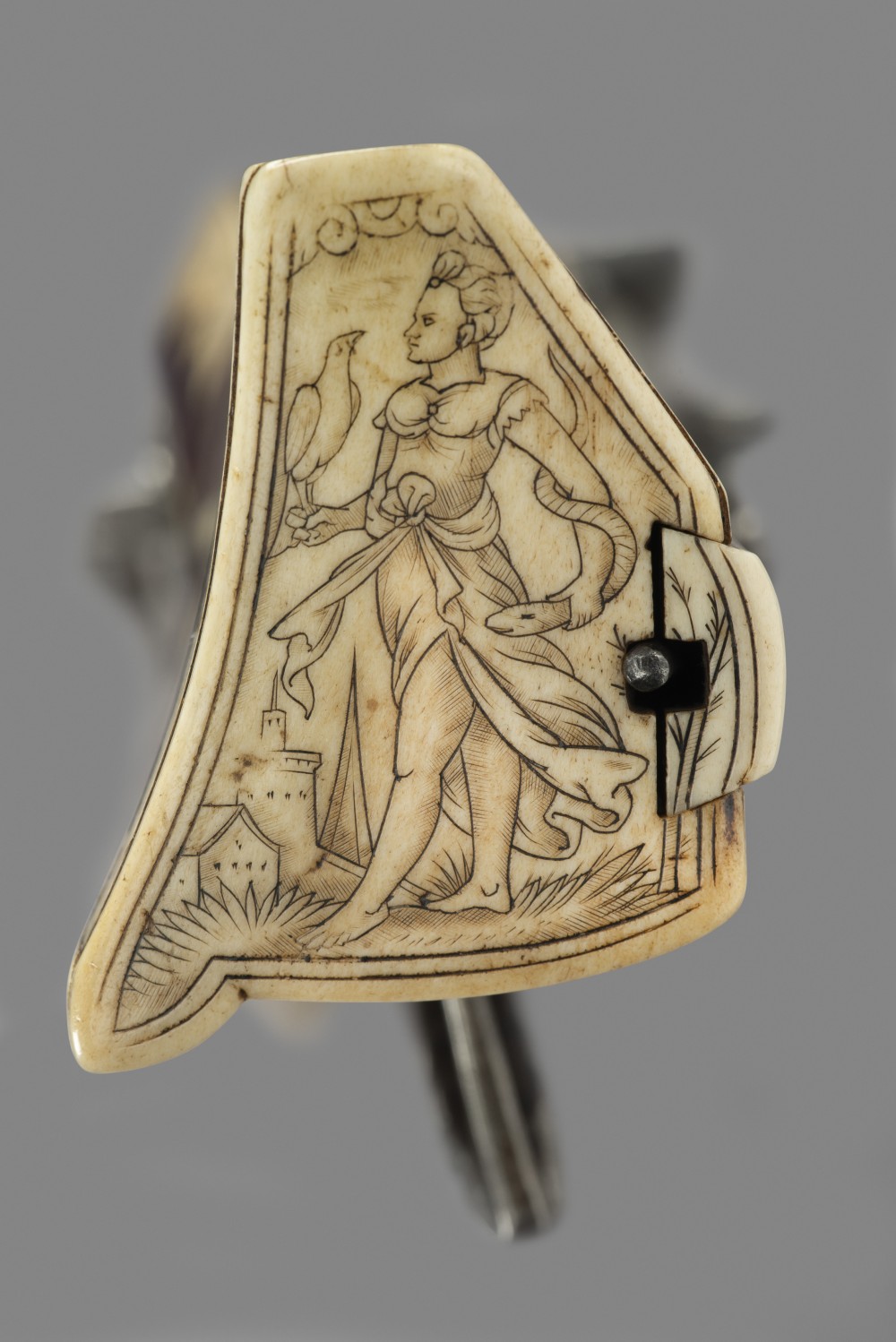 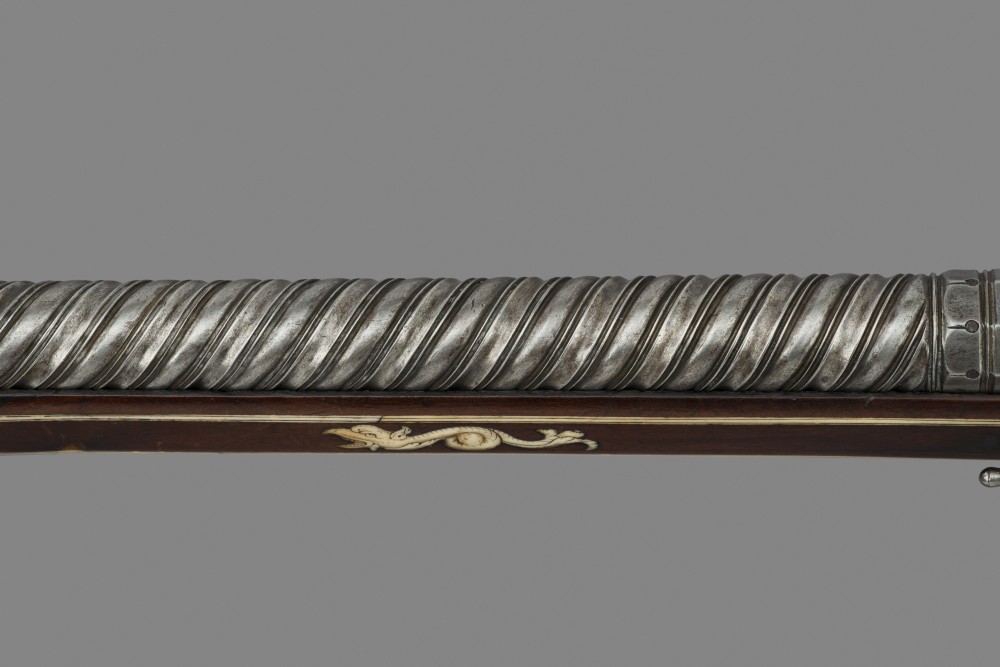 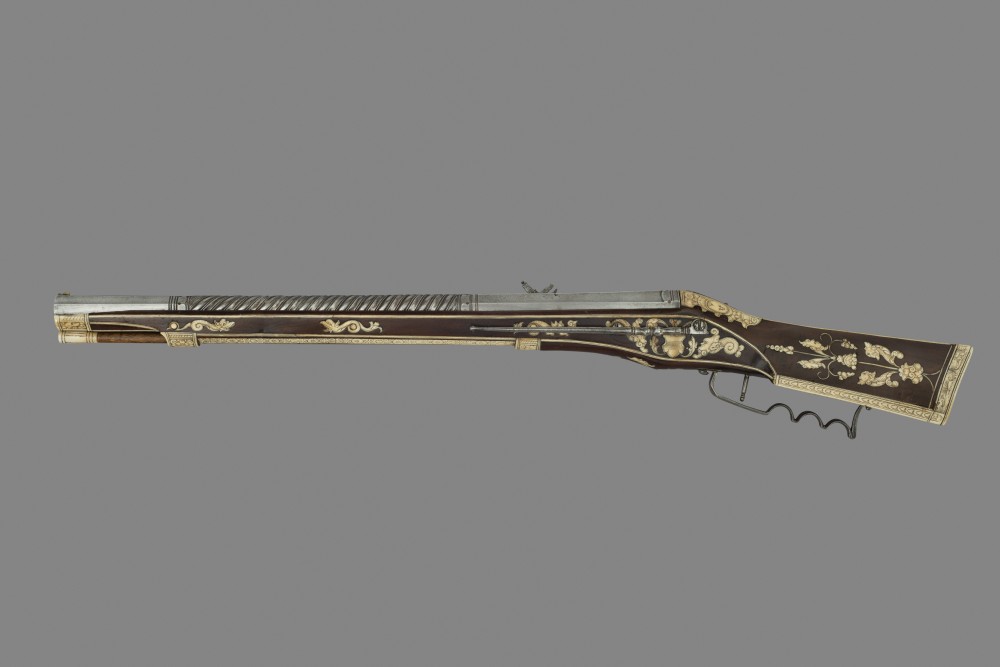 The compact length of this carbine together with the long belt hook fitted opposite the lock indicate that this piece was intended for use by a sportsman shooting from the saddle. This is a particularly pleasing weapon in all respects, and one which may rightly be said to be of courtly quality. The very unusual attention given to the decoration of the barrel stands out among German firearms of the period, while the elegance of the stock with its delicate and balanced horn inlay provides an intriguing display of motifs from the repertoire of the leading German Renaissance ornamentalists (called Die Kleinmeister), Hans Sebald Beham, Heinrich Aldegrever and Daniel Hopfer.

While elaborate decorative castings exist among the very finest German 16th century bronze cannon barrels, the similar treatment of steel barrels for corresponding hand firearms is extremely rare. Unlike bronze, the relief decoration of a steel gun barrel is the product of cutting, filing and finishing by hand rather than being more easily cast prior to its hand finishing; the decorative cutting of steel was a lengthy discipline practiced by only a limited number of artisans and was consequently a more costly process. In the present instance the eye is drawn immediately to the barrel. This takes the form of conventional octagonal stages at the breech and muzzle, with decorative girdles at their inner ends. Enclosed between these, the entire median stage is finely cut with a diagonal close-set pattern of bold convex bands alternating with ribbon-like fluted bands, and these each in turn separated by narrow flutes divided by a thread-like rib.  The lock is fitted with a safety-catch and domed wheel-cover which are characteristic of the period 1570-80. The lockplate itself is struck with the maker’s mark of the Nuremberg lock maker Georg (Jörg) Seidler, together with the Nuremberg Town mark. Georg Seidler is recorded in the Nuremberg archives as a maker of gun locks, active from about 1550. Examples of Nuremberg wheellock firearms with the locks bearing Seidler’s highly distinctive mark (in a shield, GS, a hammer between and spectacles impaled beneath) are preserved in the Deutsches Historisches Museum, Berlin, and in the former Imperial Collection in the arms collection of the Kunsthistorisches Museum, Vienna. The latter example (WS. A577), a double-barrelled pistol with a double lock, would certainly have belonged to the superb historic core collection.

Perhaps reinforced by the example of this provenance, the suggestion has been made that the coat-of-arms inlaid on the stock of the present carbine are the arms of the Imperial Habsburgs, the Bidenschild. The absence of the imperial crown is said to indicate that this carbine may have been commissioned simply as a gift from the Imperial Household. In heraldry the individual ownership of a coat-of arms is to a great extent determined by the colours used within the design. When arms are displayed as a monochrome engraving (as in the present instance) their colours, since the 17th century, are differentiated by simple hatched patterns as part of the graphic design. The first known publication of these designated hatchings dates from 1600 and we can only presume that these were established from pre-existing 16th century conventions. The Habsburg arms are a white/silver ground charged with a red horizontal band, and in the present instance the band is not represented as red. The possibility of artistic license or error is, however, a presence in early representations of heraldry and so for this reason the attribution of the present arms can only remain uncertain.

The stock is constructed from fruitwood, its rich tone made the more attractive against the finely engraved white horn mounts and horn inlay, of which the latter is both well-balanced but not sparing in application. As mentioned above, the engraved designs for the mounts and inlay are closely inspired by the engraved small designs for ornament which were published by German artists from the 1530’s onward. These uniquely graphic compact designs, peppered with the motifs and allegories of the period, were widely influential across the full range of German decorative arts and domestic wares, and equally embraced by gun-stock makers throughout the remainder of the century.

The present inlaid plan is provided by a series of engraved plaques arranged within slender horn segmental lines. Among these plaques are elongated monsters coiled about the barrel pins set along the length of the fore-end, varieties of grotesque masks both emerging from and issuant from stylised arrangements of foliage and clusters of fruit, and a delicate frame of fleur-de-lys filled with a cornucopia. Again, as referred to above, a shield of arms supported by monsters and grotesques in inlaid opposite the lock. In a more pastoral departure, small-scale hunting vignettes involving a hunter, his hounds, waterfowl and a fox are inset about the base of the butt.

The butt-plate is similarly a departure from the predominant style, engraved with the renaissance figure of Prudentia, the female personification of Prudence as one of the Four Cardinal Virtues of the classical world. As an attribute of her iconography, the falcon is an unusual addition to the figure in 16th century art. To appreciate the inclusion of both the falcon and the conventionally found serpent, it is necessary to first dismiss the accepted modern meaning of the word ‘prudence’ as the exercise of caution and restraint. As one of the foremost Virtues providing the rules for a civilised life, Prudence was defined as being the exercise of foresight and wisdom when applied to a course of action, or more precisely being the ability to judge between the virtuous course and the malevolent one. The falcon is an obvious emblem of foresight and the serpent the now less obvious emblem of wisdom. Personifications of the Virtues with their specific attributes were a popular motif among engravers of the period, their inclusion in the decoration of luxurious objects being seen jointly as an appropriate talisman and moral guide.