A Flintlock Holster Pistol Finely Inlaid and Mounted in Silver for Presentation, with the Silver Maker’s Mark of Elizabeth Barnett, London, 1825 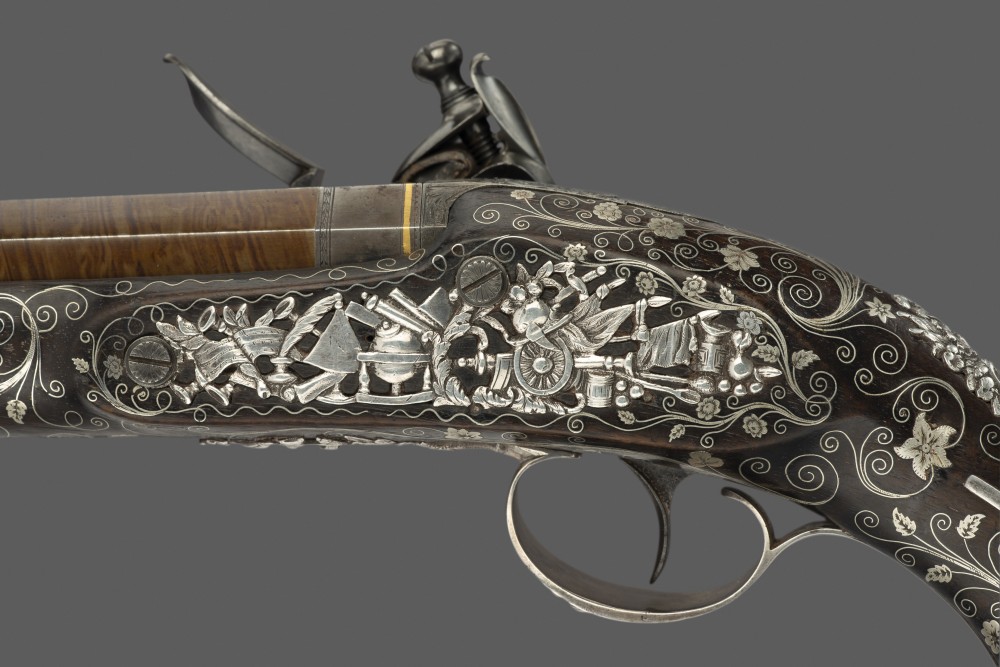 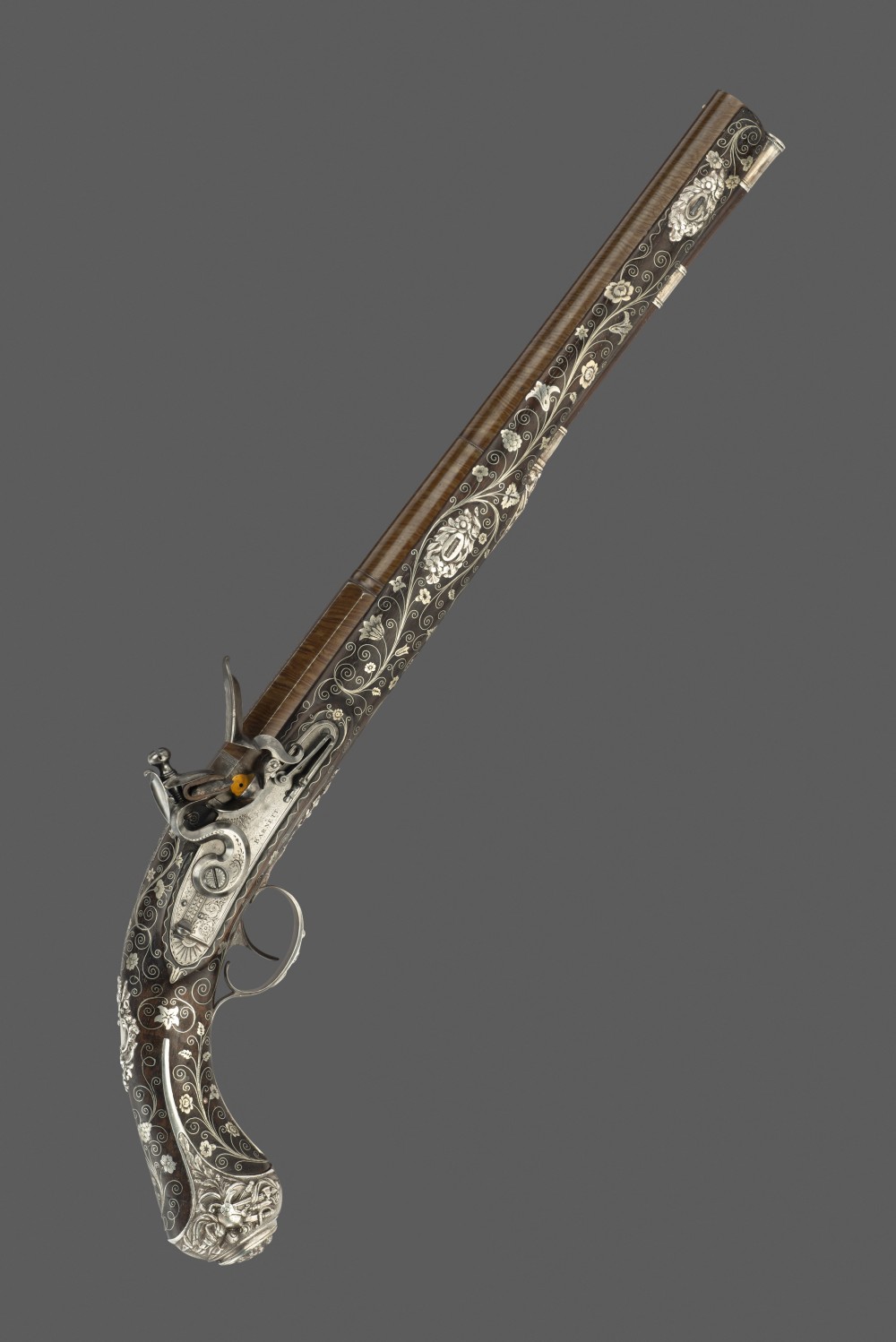 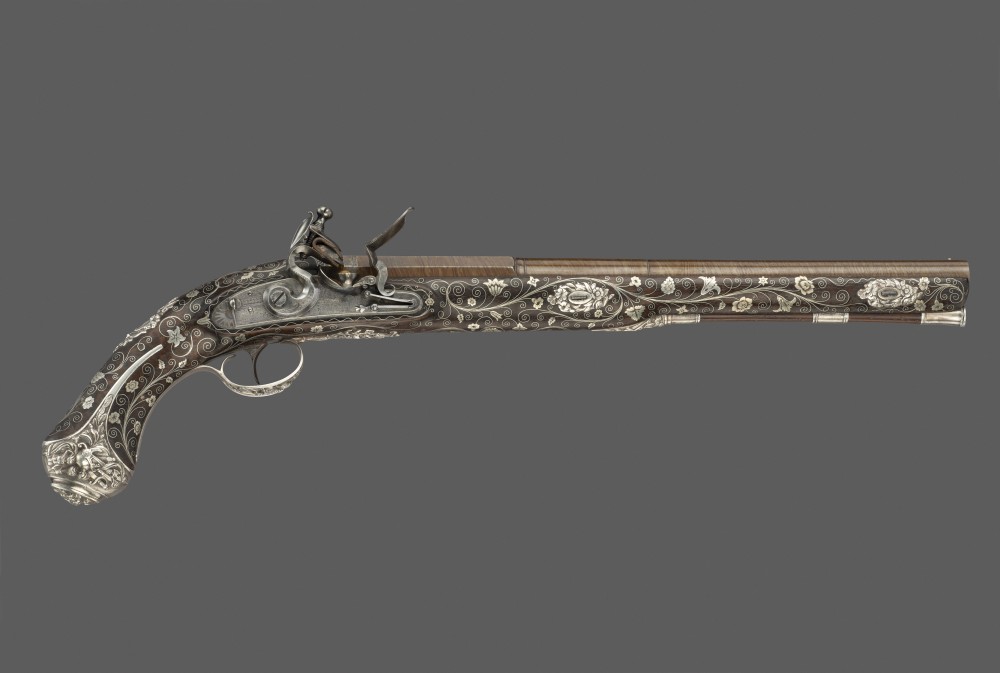 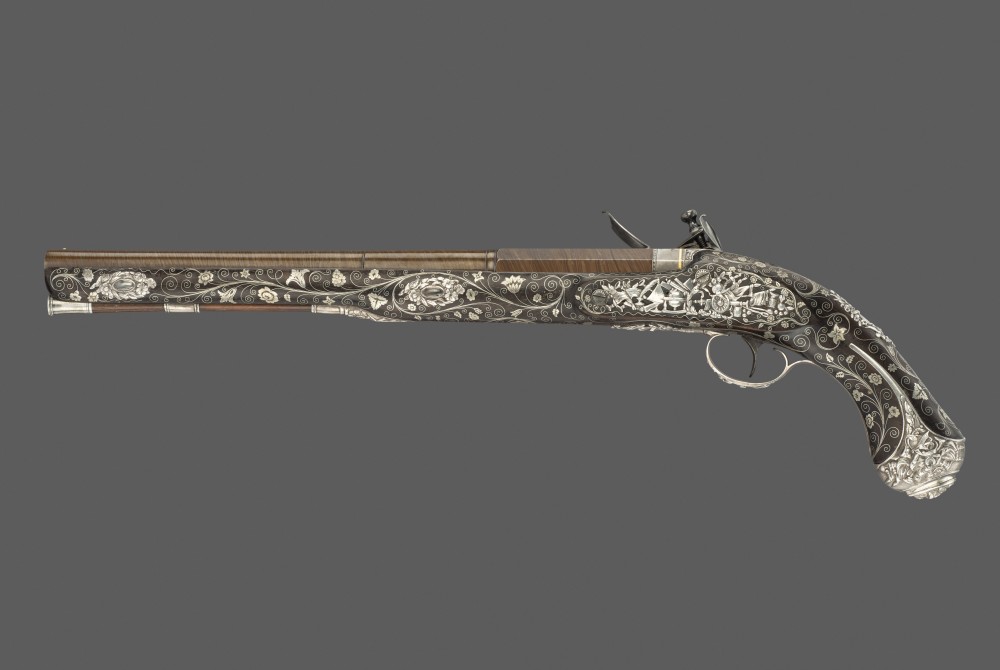 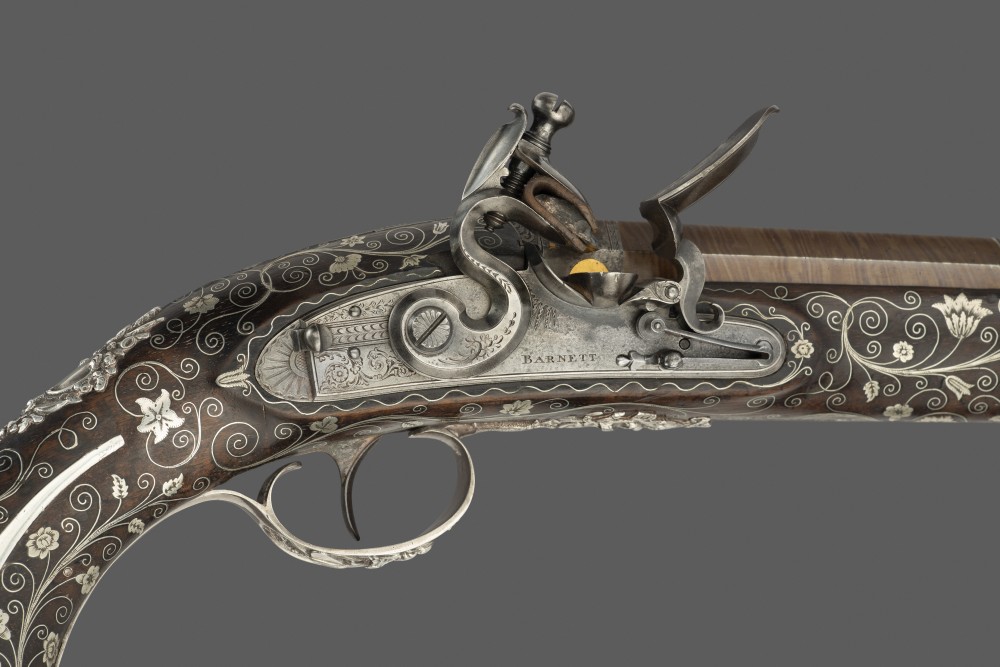 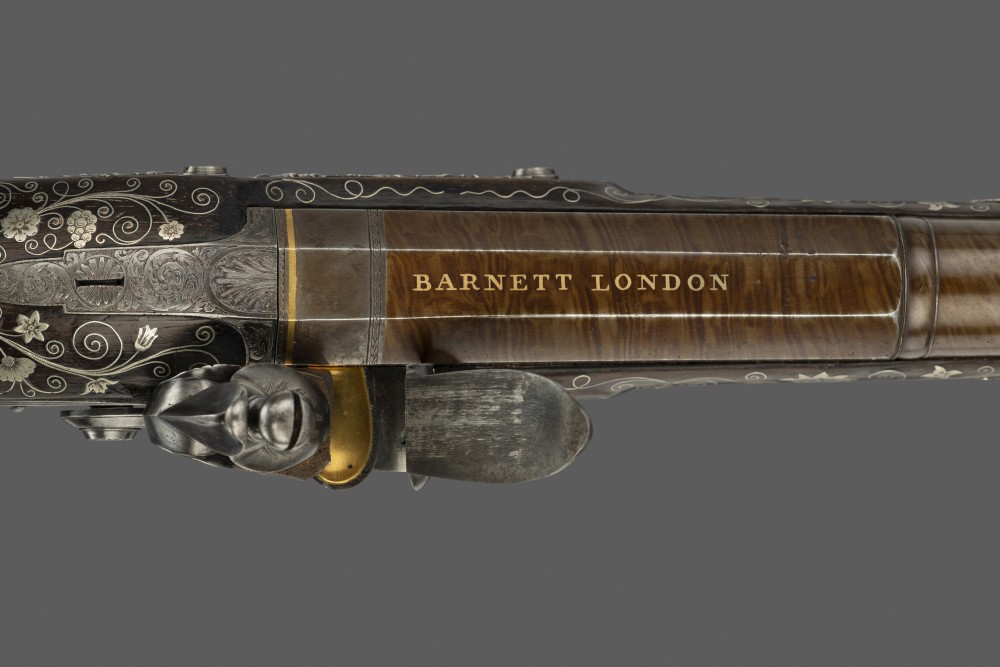 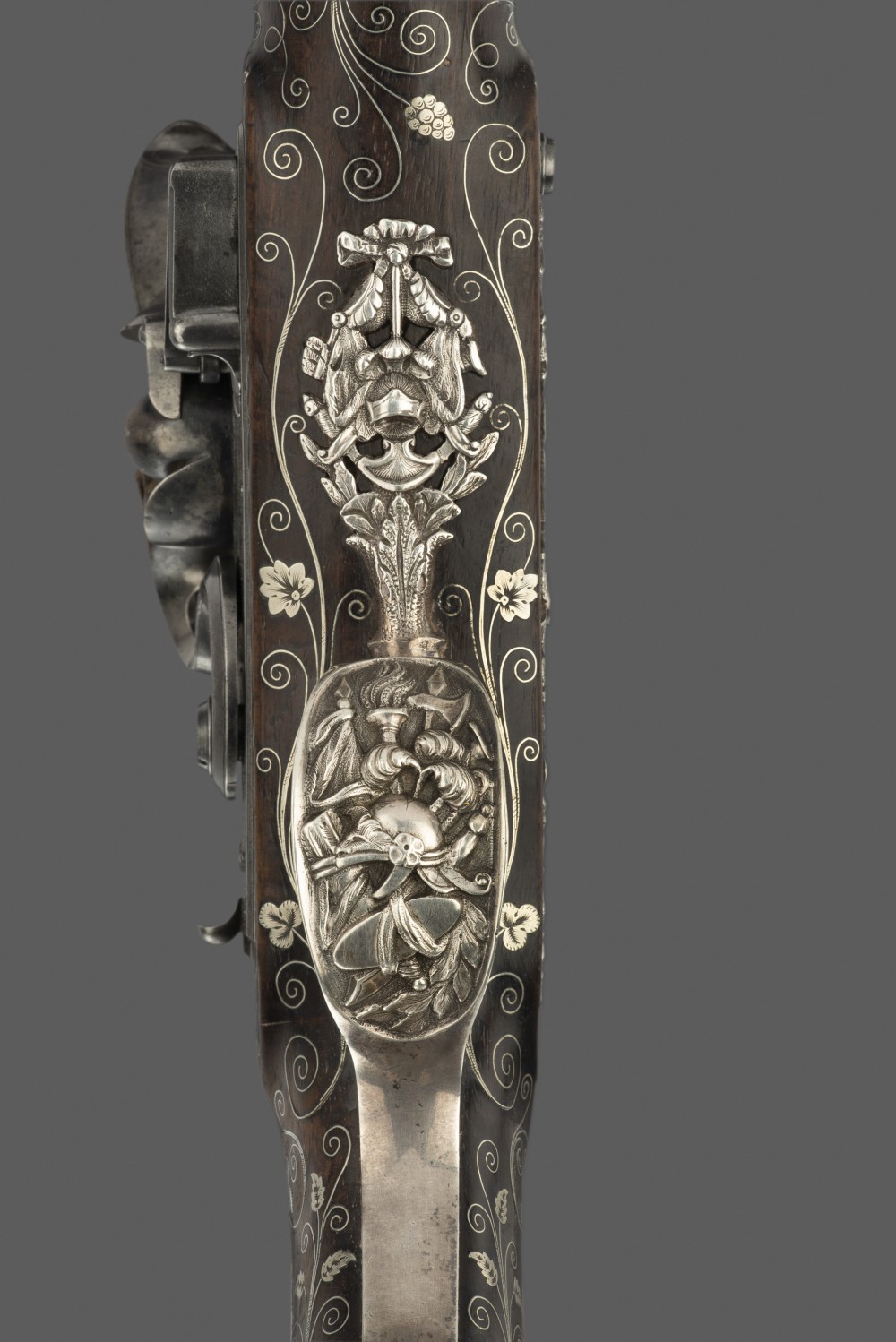 The lavish attention given to the silver ornamentation of English pistols such as this was expressly intended to provide the recipient with affirmation of the donor’s high esteem, together with an unquestionable recognition of his status, by way of a profusion of Georgian opulence. Pistols inlaid andmounted in this manner emerged in London in the 1780’s and ‘90’s, one leading proponent of this exotic style being the contemporary gunmaker H.W. Mortimer, by then renowned for creating luxurious firearms, including some so splendid as to serve as significant diplomatic gifts.

The designs for the inlaying of stocks and the corresponding bold relief designs for the mounts would be tailored for the market intended for a particular piece: in the furtherance of trade and political alliances agreat many English presentation pistols were sent to Mediterranean or Levantine countries, these made heavy use of the trophies and decorative emblems perceived to be belonging to those regions. Conversely, presentations destined for either domestic or European consumption would lean heavily on a confluence of both Classical and renaissance trophies-of-war, set amid complex patterns of floweringtendrils all appreciable by ‘the great and the good’ of those lands. The present pistol demonstrates exuberant use of this latter styling, the being mounts cast and chased to the high standards of best quality London firearms of the period and characteristic in particular of the Barnett silver workshops.

In a sharp departure from the relatively austere style of gunmaking which, by about 1770, was by increasingly adopted in London duelling pistols, the majority of these lavish presentation holster pistols were if anything anachronisms in gunmaking terms, their length and the styling of their abundant mounts conforming more to the ebullient period of English gunmaking characteristic of the mid-18th century and the fashions of the Georgian rococo period.

Despite having abbreviated his signature to his surname only, the maker is undoubtedly John Edward Barnett (1787-1849).

J.E. Barnett was born into a dynastic family of London gunmakers; he was apprenticed in 1801, at the conclusion of which he obtained his Freedom of the Gunmakers’ Company and took Livery in 1808. In 1816 Barnett succeeded to the gunmaking business of Thomas Barnett, under whom John had served his apprenticeship and took over his former Master’s premises at 134 Minories, subsequently moving first to37 Camomile Street for 1817-18, then to Prescott Street in the following year, where he remained until 1823. Ten years later Barnett returned to 134 Minories, but now trading as J.E. Barnett & Sons. Elected Master of the Worshipful Company of Gunmakers for 1828 and 1842, Barnett was appointed Contractor to the Ordnance, to the East India Company and to the Hudson’s Bay Company within the period 1832-42; following his death in 1849 the business continued under his sons.

A significant point of interest arising in the present pistol lies in the silver inlay and mounts being the work of a woman. She was one Elizabeth Barnett, the widow of the silversmith Michael Barnett, a silversmallworker important in the history of London gunmaking.

This corrected attribution is significant to the present pistol, its silver trigger-guard being struck with the maker’s mark E.B, registered at Goldsmiths’ Hall in 1823 by Elizabeth Barnett, described as a ‘hiltmaker’. That she was able to register her own mark is testament to her abilities as a silversmith. Elizabeth continued in her husband’s workshop at Cock Lane and not unnaturally continued to supply the gun trade in furtherance of the styles established by her late husband. Evidence that she additionally made occasional use of his stock-in-hand is provided by the escutcheon on the present pistol, which is formed as an elaborate rococo cartouche: identical examples are used on four pairs of duelling pistols made by John Manton (the so-called ‘Earl of Hertford’ pistols), with mounts marked for Michael Barnett, circa 1793 (formerly in the Hugh Pollard collection, thence to H.W. Hall and latterly to Wilfrid Ward). Another example, identical also and on a pair of pistols also by John Manton, is included among Michael Barnett’s mounts hallmarked for 1797 (formerly in the Clay Bedford collection).

Recorded examples of Elizabeth Barnett’s work are very few and the present pistol is apparently not amongthese: a rare example of her mark is found on the silver ramrod-pipe on a flintlock gun made by Durs Eggfor the Duke of York (now in the Royal Collections, Windsor).