An Embossed and Gilt Breastplate for a Foot or Light Cavalry Armour, c. 1550 - 60 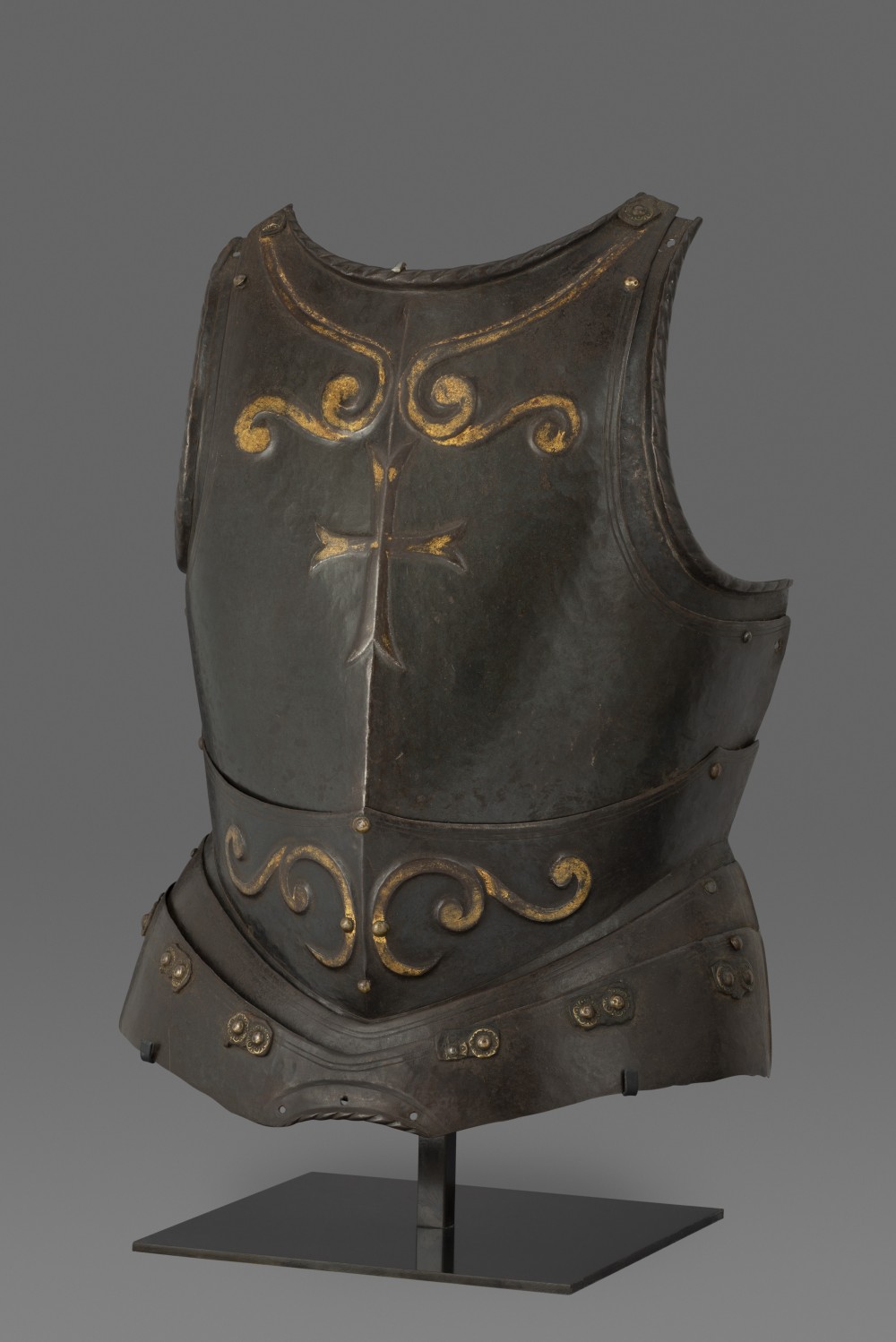 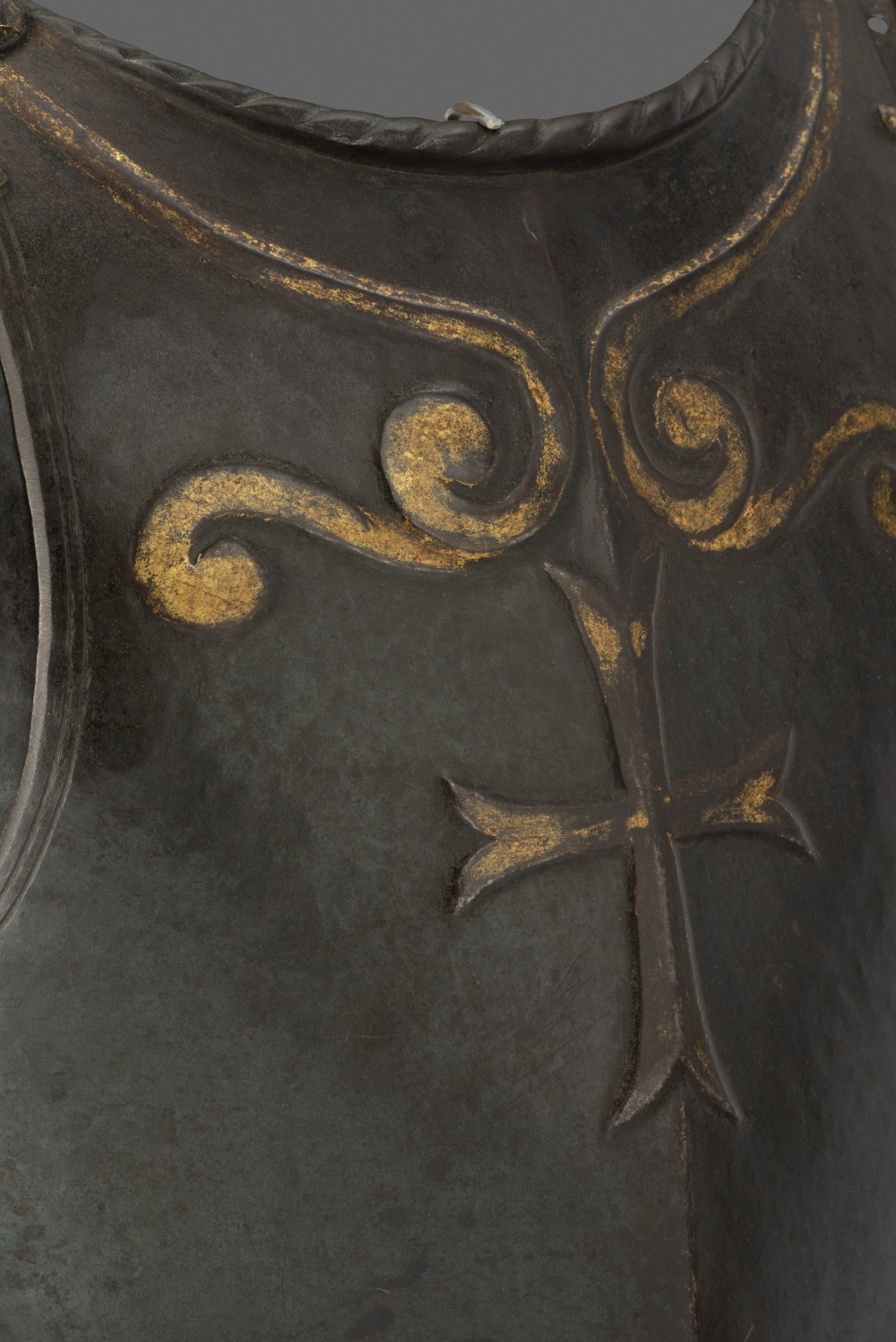 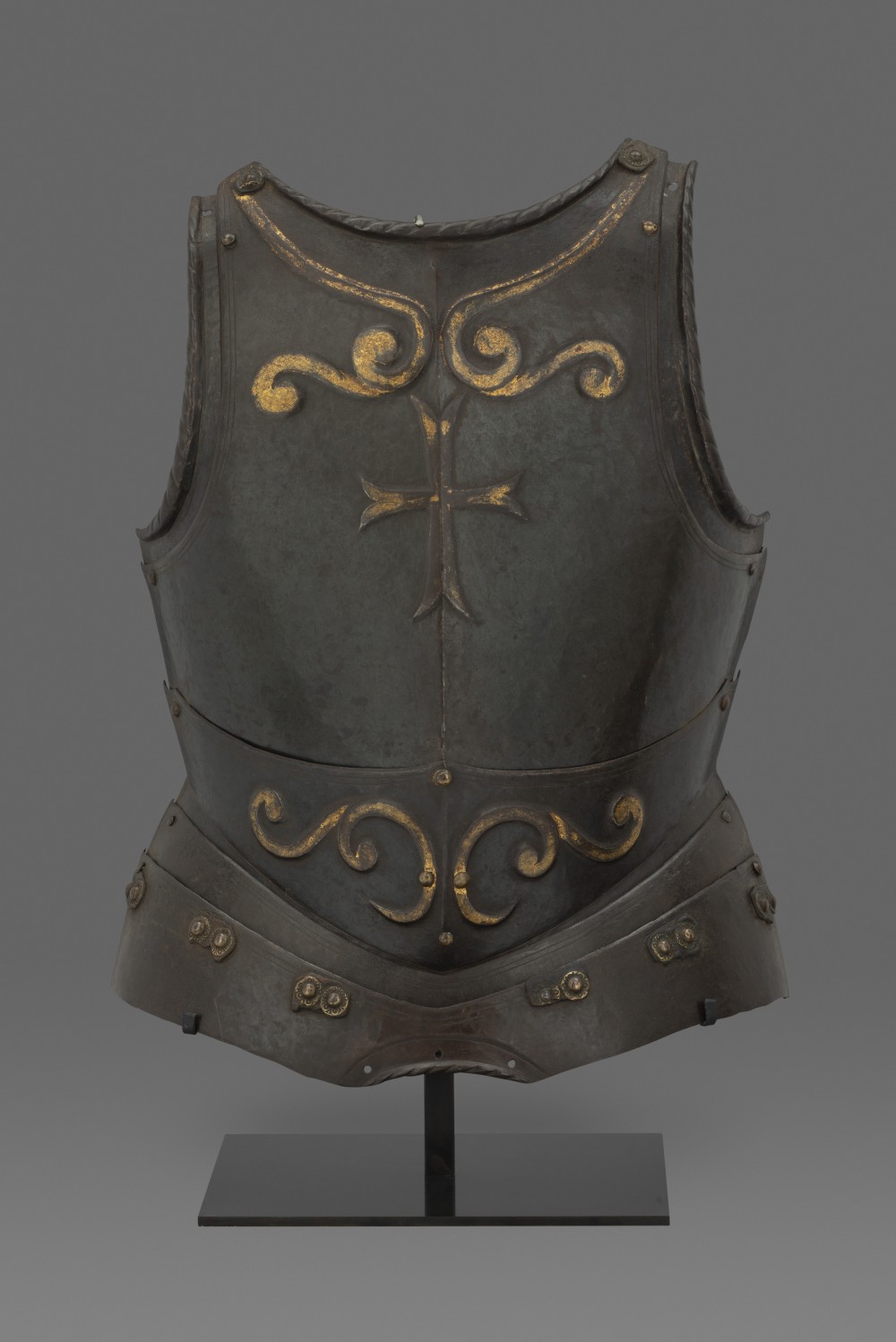 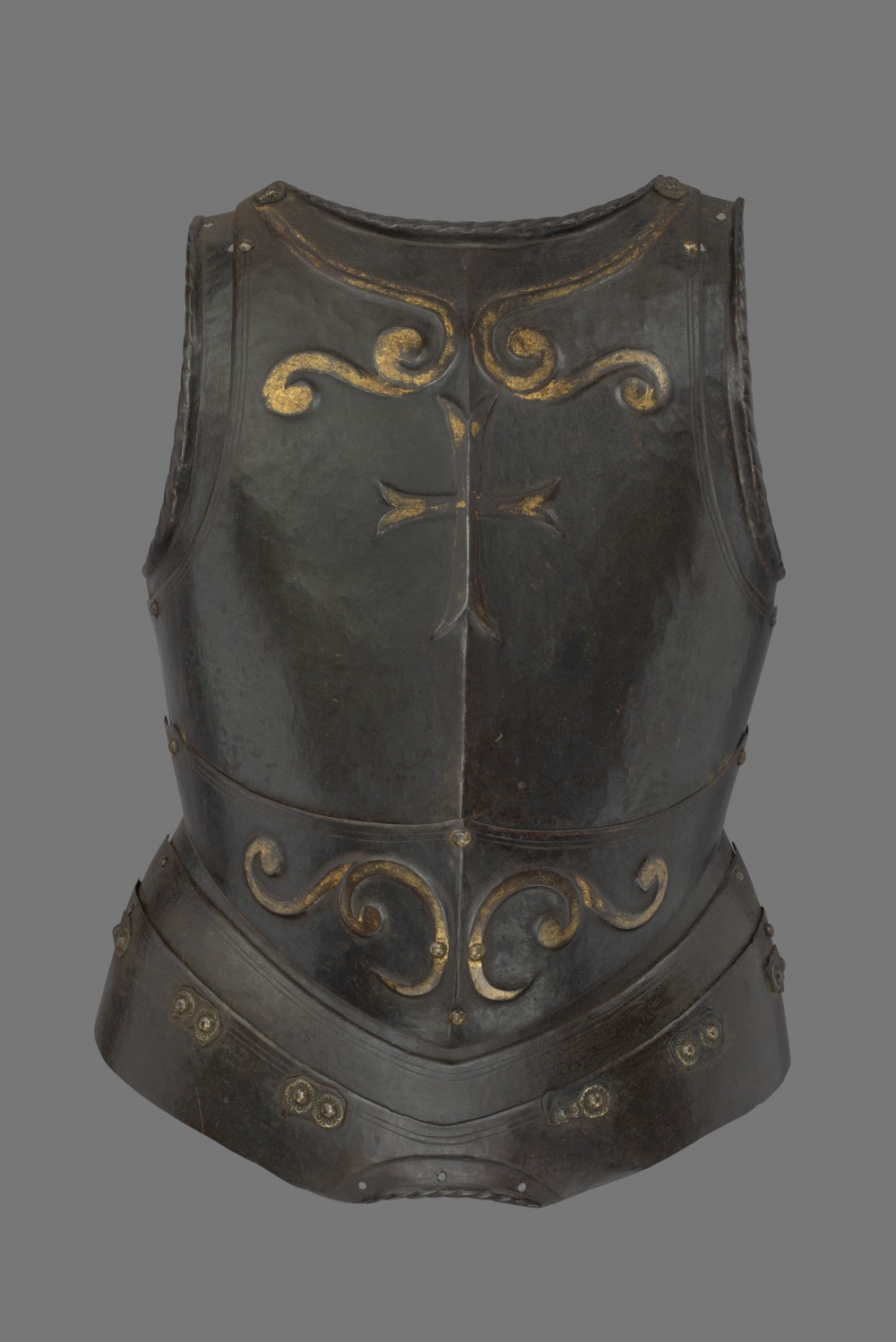 Possibly included in the removal of arms and armour from the armoury of The Order of the Knights of St. John, Valetta, Malta, during either the French occupation of 1798-1800, or when under British governance within the first half of the 19th century

This breastplate was certainly made for wear by an officer of an elite body of troops, possibly those of The Order of the Knights of St. John, or alternatively the armed retinue of a high-ranking nobleman, or perhaps those forming a city guard.

The elegant elongated construction typifies the long-waisted form which was fashionable during the mid-16th century period of armour production in Milan, Brescia and Mantua. With the obvious exception of the gilded relief decoration, the outer surface is entirely blued, the finish now naturally lightly oxidised by age; it is not difficult, however, to picture the splendour of this armour within its period of use. Characteristic of the type, the construction comprises a main plate formed with a ridge running over the full height of the median and continuing over an over-lapping broad waist plate. The edges at the neck-opening and arm-gussets are finished with boldly cabled turns and the outward flange of the waist plate carries its original skirt of two lames.

Decorative embossed scrollwork sweeps downward in a symmetrical pattern from the upper corners to below the neck, and in the Italian style of the period this is balanced by its repetition over the waist plate.

The linear scrolls of the embossed ornament are conspicuous in their broad plain surfaces and bold graceful curves, in these respects the embossed work is comparable, for example, with the ornament embossed over the sides of an Italian burgonet skull of the same period, in the Stibbert Museum, Florence. The stylised fleur-de-lys motif incorporated in the embossed design is most likely the badge of a body of troops also (see Lionello Boccia, Il Museo Stibbert, Florence, 1975, cat. no. 64, fig. 65A).

Placed on the present breastplate as if suspended from the embossed scrolls is an heraldic Cross Moline, serving both to identify the allegiance of the wearer and to act as a Christian talisman. Similarly medieval in their origin were the crosses worn by the early Knights Templar and by the Knights Hospitaller, the latter properly titled ‘The Order of the Knights Hospitaller of St. John of Jerusalem’.

With its straight parallel-sided arms and small outwardly turned pairs of points, the Cross Moline is the design from which the better-known Maltese Cross developed and which was subsequently adopted as the badge of the Order of the Knights of St. John.

Within the immediate decades following their move to Malta in 1530, related tomb effigies, frescoes and portraiture of the period reveal that the Knights of St. John were initially identified by their medieval Cross in Ordinary rather than by the Maltese Cross, which only latterly became synonymous with this knightly order. This appears to have remained the case until circa 1550, beginning with the gradual introduction of the Moline type, but used in parallel with the Cross in Ordinary. It is only within the period 1570-1600 that the fully developed Maltese cross becomes frequently observed on the breastplates, red fabric tabards, shields and ceremonial cloaks of the knights.

Two late 16th century examples of munition breastplates bearing the Cross Moline (each considerably less elaborate than this present example), are preserved in the Royal Armouries Collections, Leeds (III.905, III.1327).  A further two examples, of the same period, ascribed to possible Brescian origin and each embossed with a pendant Maltese Cross are in the Odescalchi Collection in the Museo Nazionale del Palazzo di Venezia, Rome (inv. 1105 and 1113).

Notable also in this discussion is a portrait in the Palace of Hampton Court, London, by Jacopo Robusti, called ‘Tinteretto’ (1518-94). The subject is a Knight of St. John; suspended from his neck is a Cross Moline, while the cross on his cloak is a Maltese Cross approaching its fully developed form.