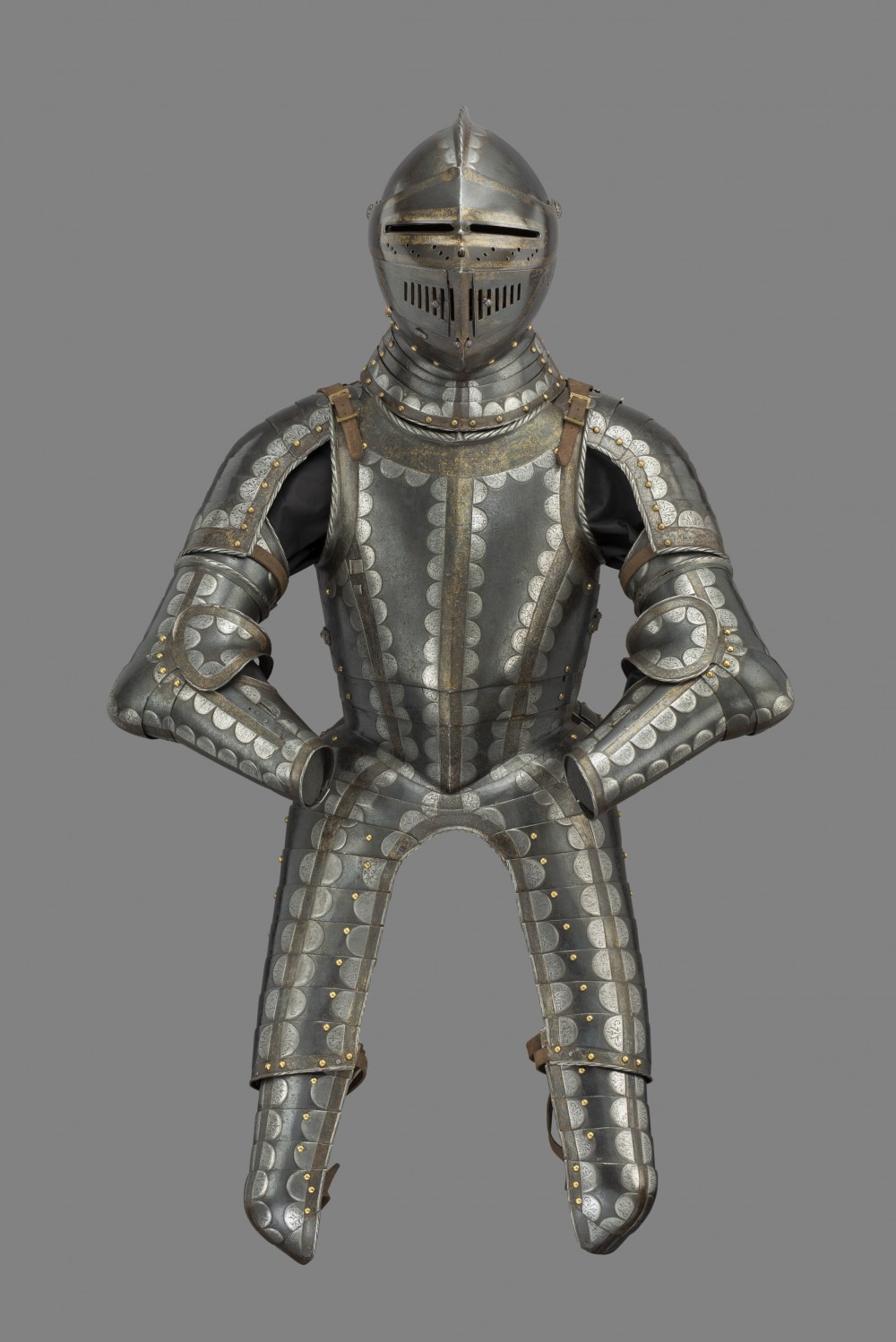 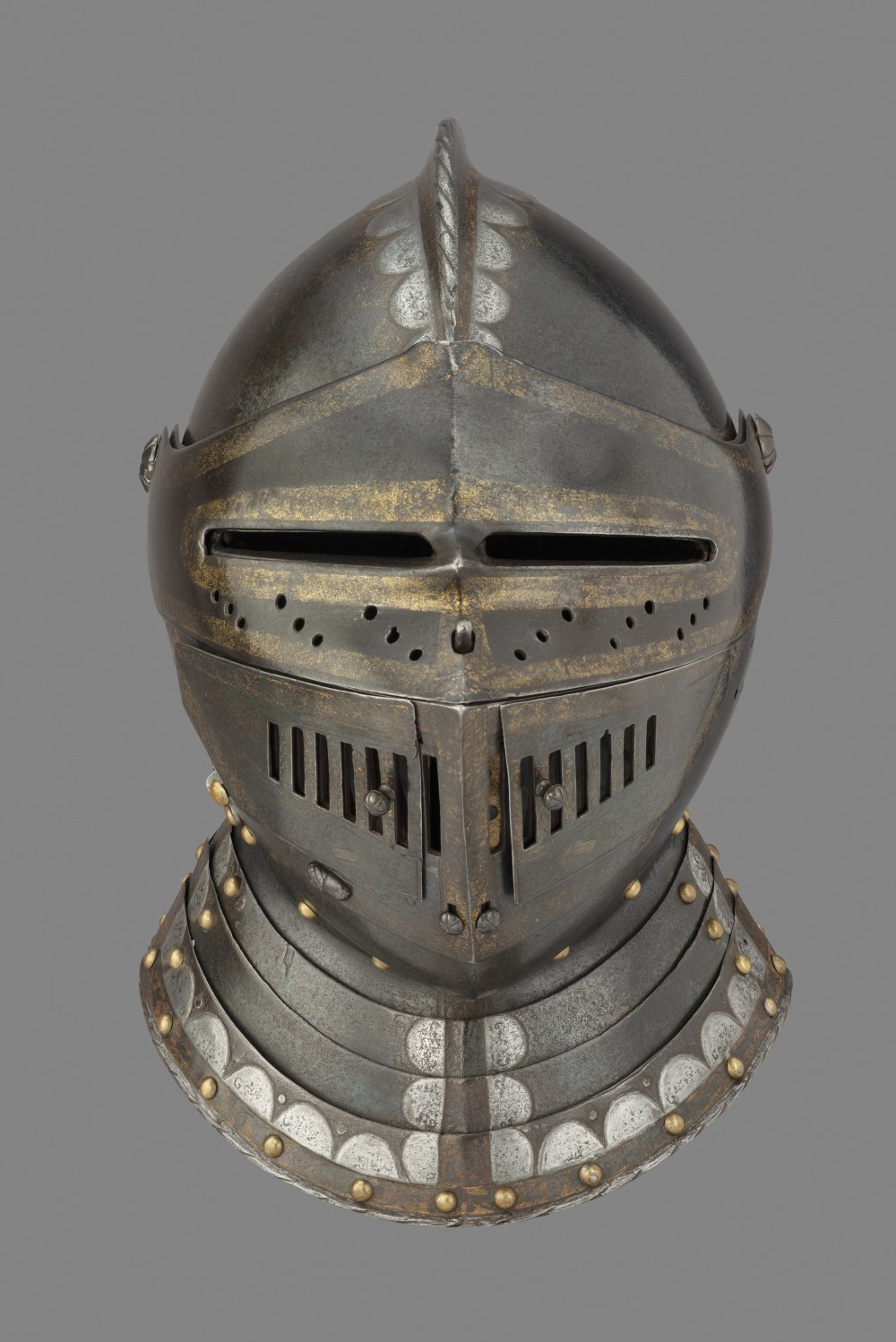 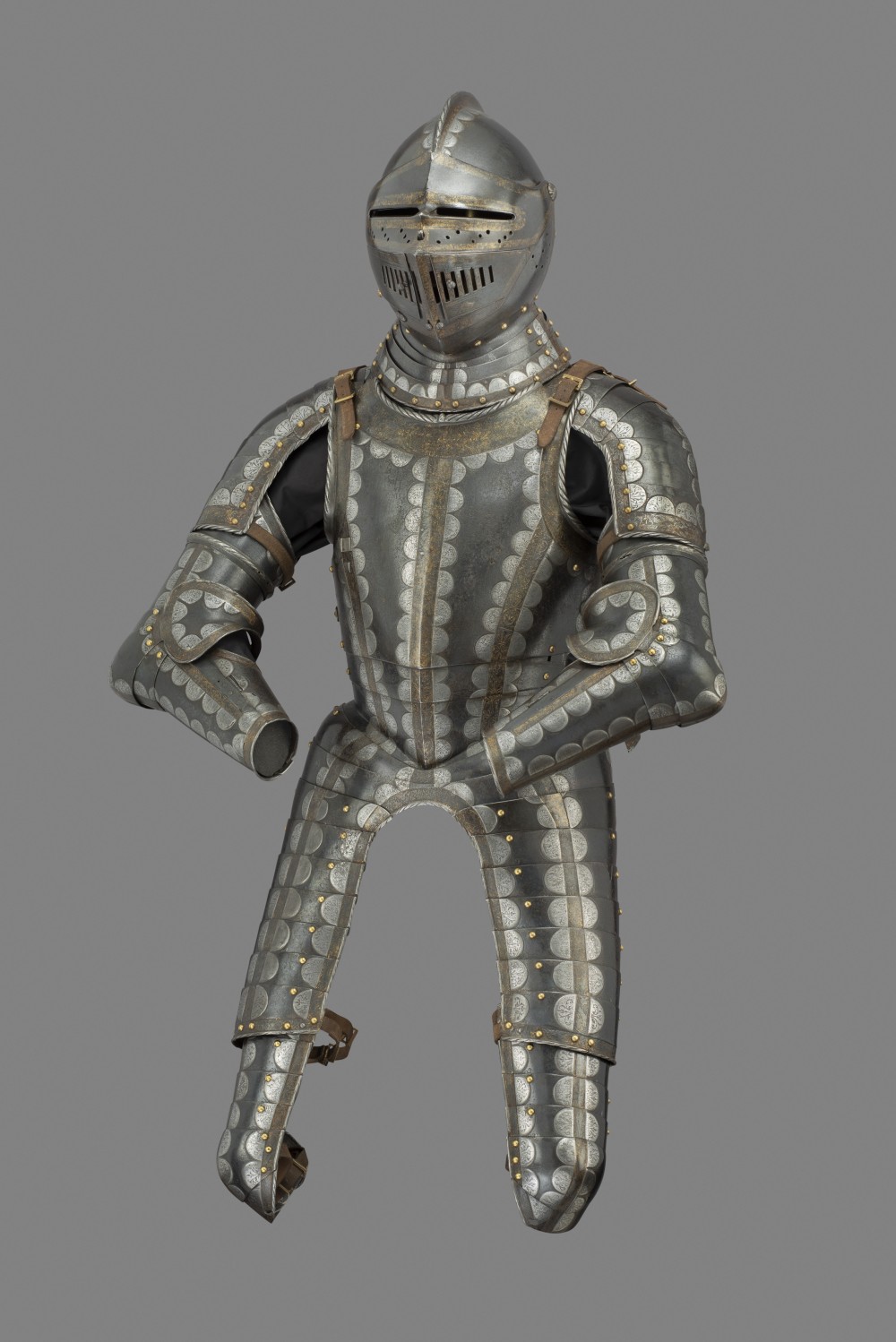 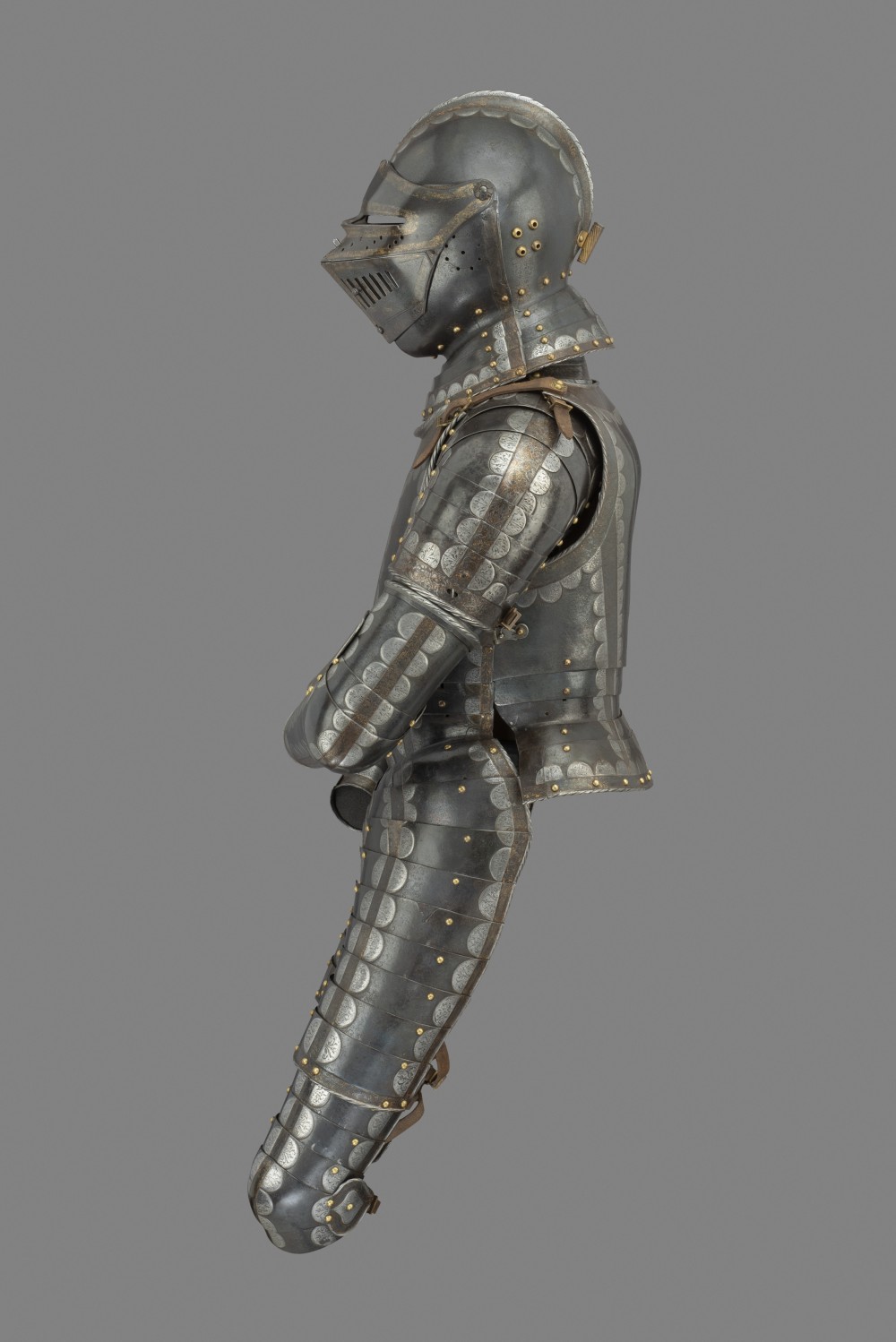 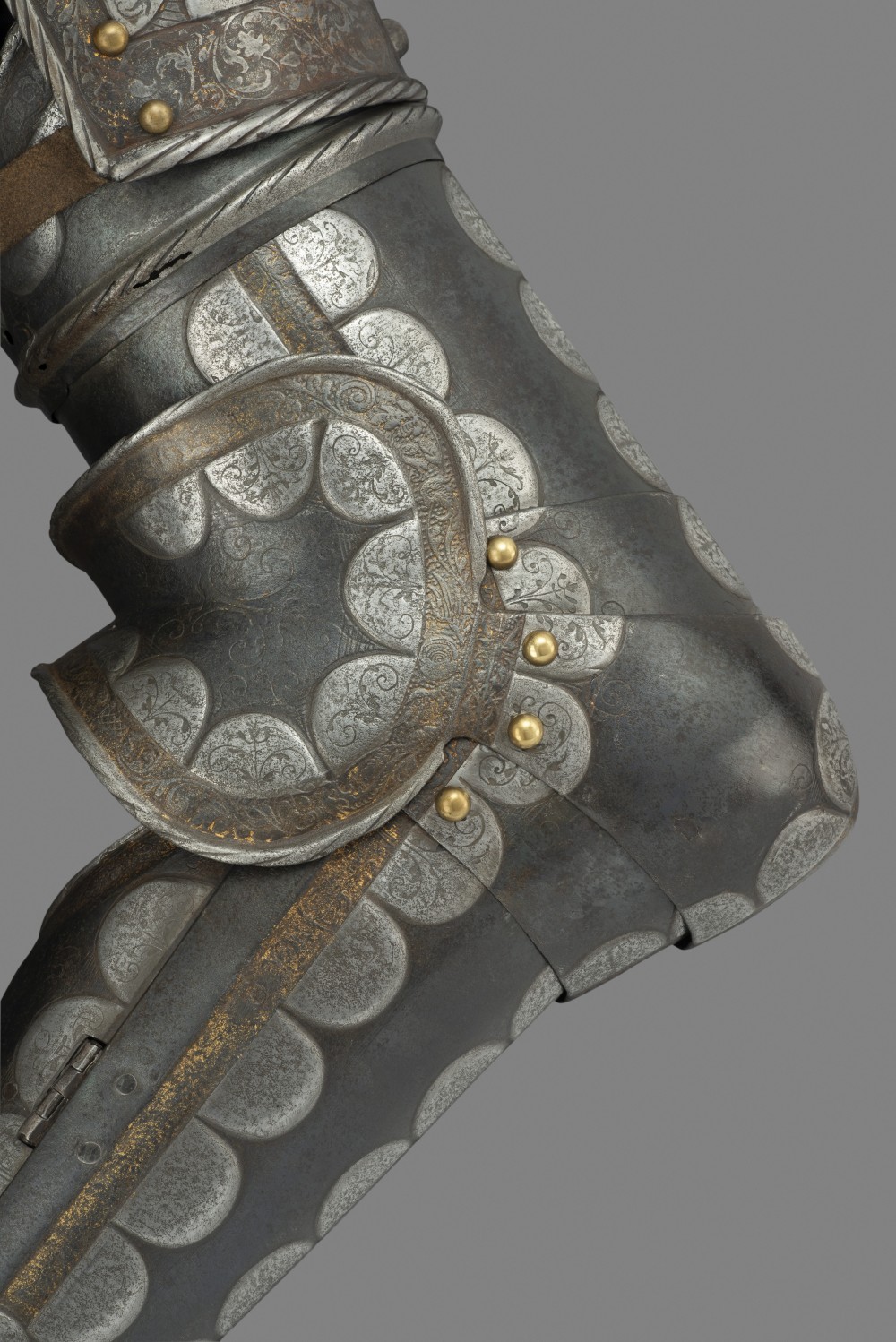 Literature:
Mario Scalini, ‘Autography problems and study of Renaissance armours: additions to the Helmschmid family and Matt.us Frauenpreiss catalogues’, in A farewell to Arms, studies on the history of Arms and Armour, Legermuseum, Delft, 2004, p.66, fig.9

This armour is likely the earliest known collaboration between Desiderius Helmschmid, court armourer to the Emperor Charles V, and the etcher Jörg (II) Sorg, acclaimed masters of their respective disciplines working in Augsburg in the 16th century. The armour is etched on the helmet visor with the date 1545, the year of its completion, which pre-dates by three years the previously held start of their collaboration.

Desiderius Helmschmid (1513-79) was a member of a dynastic family of armourers working with distinction in Augsburg and Vienna, in the service of the Habsburg emperors and the nobility of their courts. His great-grandfather, Jörg the elder, was armourer to the Emperors Friedrichs III and Maximilian I. His grandfather, Lorenz, inherited the latter appointment and his father, Koloman, was in turn armourer to the Emperor Charles V. Katharina (1508-53), the sister of Desiderius, married the etcher Jörg Sorg the elder in 1520, and it was his son of the same name who later worked in association with Desiderius.

The attribution of the present armour to Helmschmid is naturally made on the basis of close similarities between its construction style and that of some constructional characteristics in armour belonging to the list of Helmschmid’s acknowledged works. Another and equally valid route leading us towards our proposed conclusion has been study of the armours known to have been decorated by Jörg Sorg, and more specifically those for which Sorg was engaged by Helmschmid to etch. In examining Sorg’s decorative treatment of these we have made comparisons with the etching of the present armour, particularly those armours etched with the ‘luntte’ or ‘schuppen und ranken’ pattern which dominates both the present armour and a small number of others acknowledged to be Sorg’s work.

In looking at Sorg’s etching we are assisted by his own ‘Harnisch-Musterbuch’, his personal finely illustrated record of the armours he worked on, detailing in his hand also who they were made for and importantly to us, providing the names of the master armourers who made them. Sorg’s records clearly reveal the measure of his ability, and that in parallel with Desiderius Helmschmid he was also employed by many of the foremost armourers of the day.

The original Musterbuch codex is lodged in the Württembergischen Landesbibliothek in Stuttgart, but fortunately the full series of superb watercolour drawings and Sorg’s accompanying notes have been reproduced in a volume published in 1980, together with modern scholarly commentary. Less convenient, given that the present armour was completed in 1545, is that Sorg’s record begins only in 1548, the year in which he is recorded as becoming a Master etcher.

This chronological gap is first bridged by looking at Sorg’s record of an armour made by Hans Luzenberger in 1550, for a member of the Spanish Habsburg court (see MS. fol. 11 v, plate 40). This gives a clear image of the lunette pattern, complete with the small scrollwork designs which individually fill the nodules in the design, and which form part of the lunette pattern on the present armour.

Further comparison is offered by Sorg of a garniture comprising four armour designs, successively for the foot tournament, the tilt at the barrier and two field armours. This elaborate garniture was made by Helmschmid in 1552, for Ludwig Ungnad von Weissenwolf auf Sunegg, Freiherr zu Sanegck, a senior officer of the Habsburg court, active 1542- 66 (see MS. fol. 22 v 23 and 24, number 80). With the exception of the tilt armour, the three remaining manuscript illustrations display the lunette pattern as being closely related to the overall corresponding design on the present armour, albeit lacking the augmentation of the small scrollwork designs and projecting sprigs which are an additional etched detail of the present armour. Given the minute scale of this last feature its omission may perhaps have been an oversight on the part of the manuscript draughtsman.

A survey of surviving armour constructed and etched in the manner of Helmschmid and Sorg includes several detached elements in institutional collections. The first of these is a detached couter (elbow defence) in the von Kienbusch Collection of The Philadelphia Museum of Art (cat.no. 190). This belongs to the same armour as the cuff of a right gauntlet and the front and rear lame of a gorget in The Metropolitan Museum of Art, New York (29.158. 329 and 389).

A strong example is a light field armour in The John Woodman Higgins Armory, Worcester, Massachuesetts (JWHA 2582). This is compared in the catalogue to the work of Desiderius Helmschmid and Jörg Sorg, and once again conforms quite closely to the embossed and etched decoration of the present armour; the catalogue draws attention also to a matching left cuisse (thigh defence) in the Victoria and Albert Museum, London. The Higgins catalogue entry further invites comparison with the ‘Mühlberg’ armour of Charles V, the exchange close helmet included in its garniture has particular relevance to present armour.

In terms of its construction, the present helmet compares particularly closely with the helmet made by Desiderius Helmschmid as a part of the Mühlberg garniture of Charles V. Below the sophisticated double visor, a spring-loaded system of pierced slotted plates shoots rearward to reveal corresponding ventilation slots now open on the left- and right-hand sides of the upper-bevor. Moving on internal spring-catches left and right, the plates are released from their forward closed position by the touch of a projecting button on either side. This ingenious device is extremely rare, and quite possibly exists on no other helmets save the examples of the present armour and the Mühlberg, each a very close constructional, near-twinned match throughout.

The lance-rest on the breastplate of the present armour is again a very rarely seen device of great ingenuity. The arm of the rest is straight in plan and may be pushed back into the breast-plate to form a concealed fit entirely flush with the now streamlined armour surface. The release spring-catch is formed as a rectangular button beneath, neatly flush-fitting.

This device exists on the ‘von Cleve’ half-armour of Charles V, made by Desiderius Helmschmid in 1543; the armour is preserved in the Leibrüstkammer of the Kunsthisorisches Museum, Vienna, the former imperial collection (A 546). The concealed lance-rest was an invention of Koloman Helmschmid and is not known on armour outside of a minority of those produced by Koloman and Desiderius.

On 24th April 1547 the Habsburg Holy Roman Emperor led his army to a decisive victory over the Princes of the Lutheran Schmalkaldic League near the town of Mühlberg, in the Electorate of Saxony. In his victory Charles V crushed the Protestant opposition and the German lands were his. Such was the significance of this his most prized victory, that the artist Titian was commissioned to paint an iconic equestrian portrait of the emperor wearing the light cavalry armour of embossed, etched and gilt plate which he had worn during the campaign. This armour, now widely recognised through Titian’s painting, belongs to a magnificent field garniture made by Desiderius Helmschmid, completed in 1544 and so dated. Titian’s portrait of 1548 provides a faithful detailed record of this Helmschmid armour, its embossed and etched decoration provides a clear reflection of the Habsburg court taste of this period (Museo Nacional del Prado, inv. no. P-410).

Known today as the ‘Mühlberg’ garniture, the half- length light armour which formed the core of the garniture, together with most of the constituent exchange pieces, are preserved in the Royal Armoury, Madrid (Patrimonio Nacional, Real Armería, A. 165, A. 184 and A. 182). Included within the surviving garniture is its close helmet, a sophisticated construction in all respects, the current relevance of which has been the subject of our brief commentary above. Faithful records of this helmet exist in two further portraits of Charles V, painted in 1599 and 1608 (though repeatedly depicting the armour wrongly as black and gilt), each by Juan Pantoja de la Cruz, after Titian (Patrimonio Nacional. El Escorial, Real Monasterio de San Lorenzo).

The Mühlberg close helmet also appears among a limited number of pieces from the garniture which were recorded in a page of the Inventario Illuminado of the Royal Armoury, the pictorial inventory of the arms and armour of Charles V.