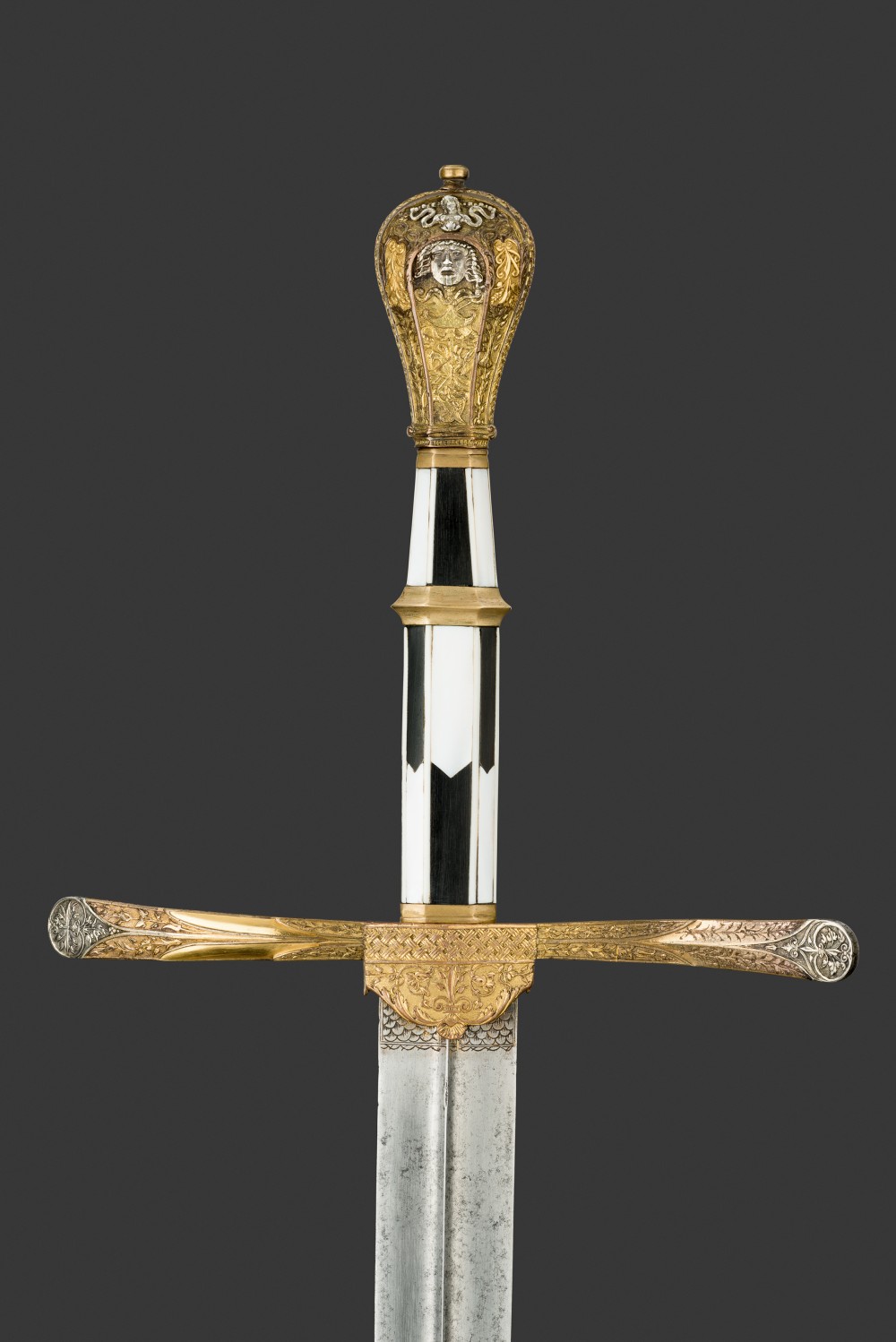 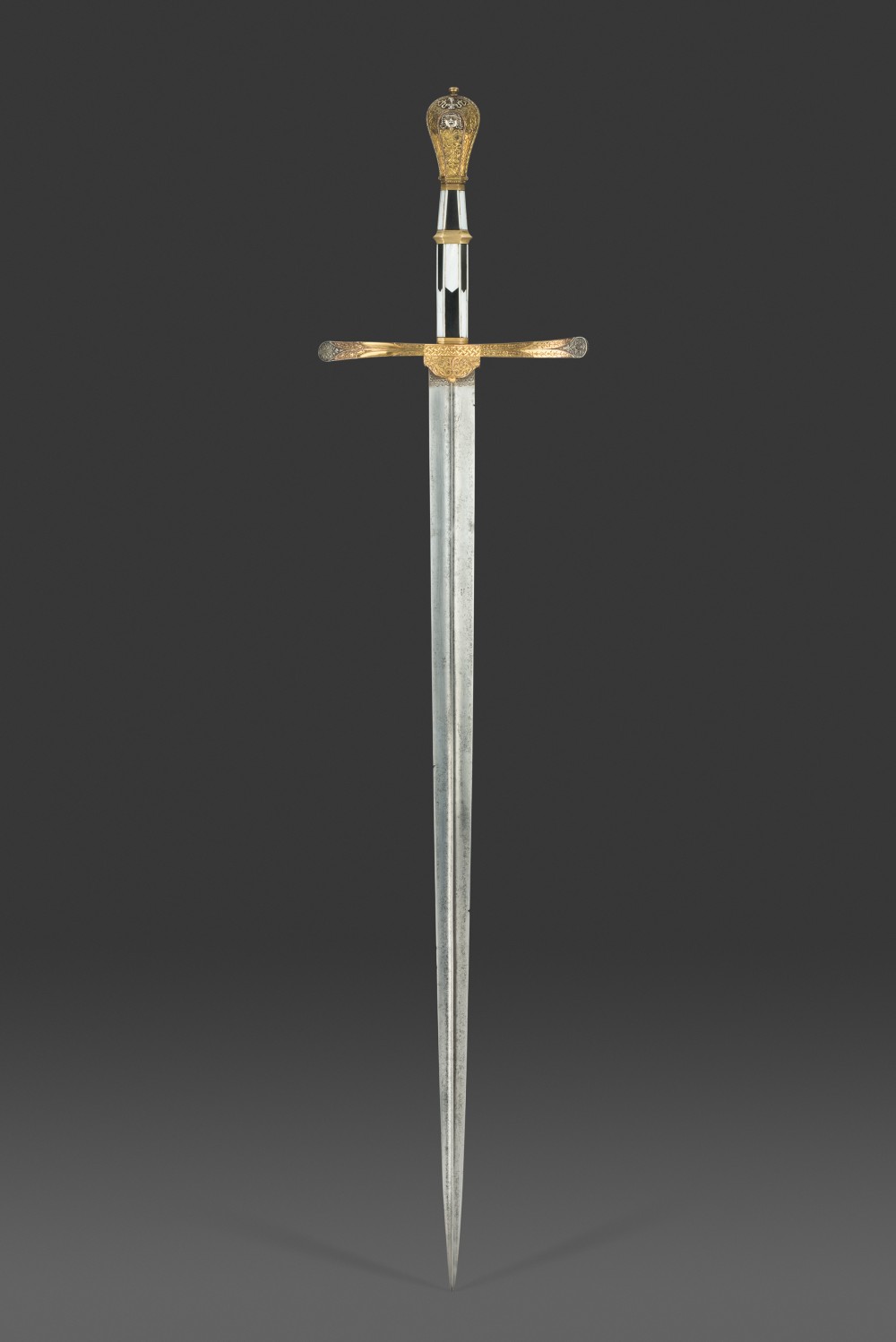 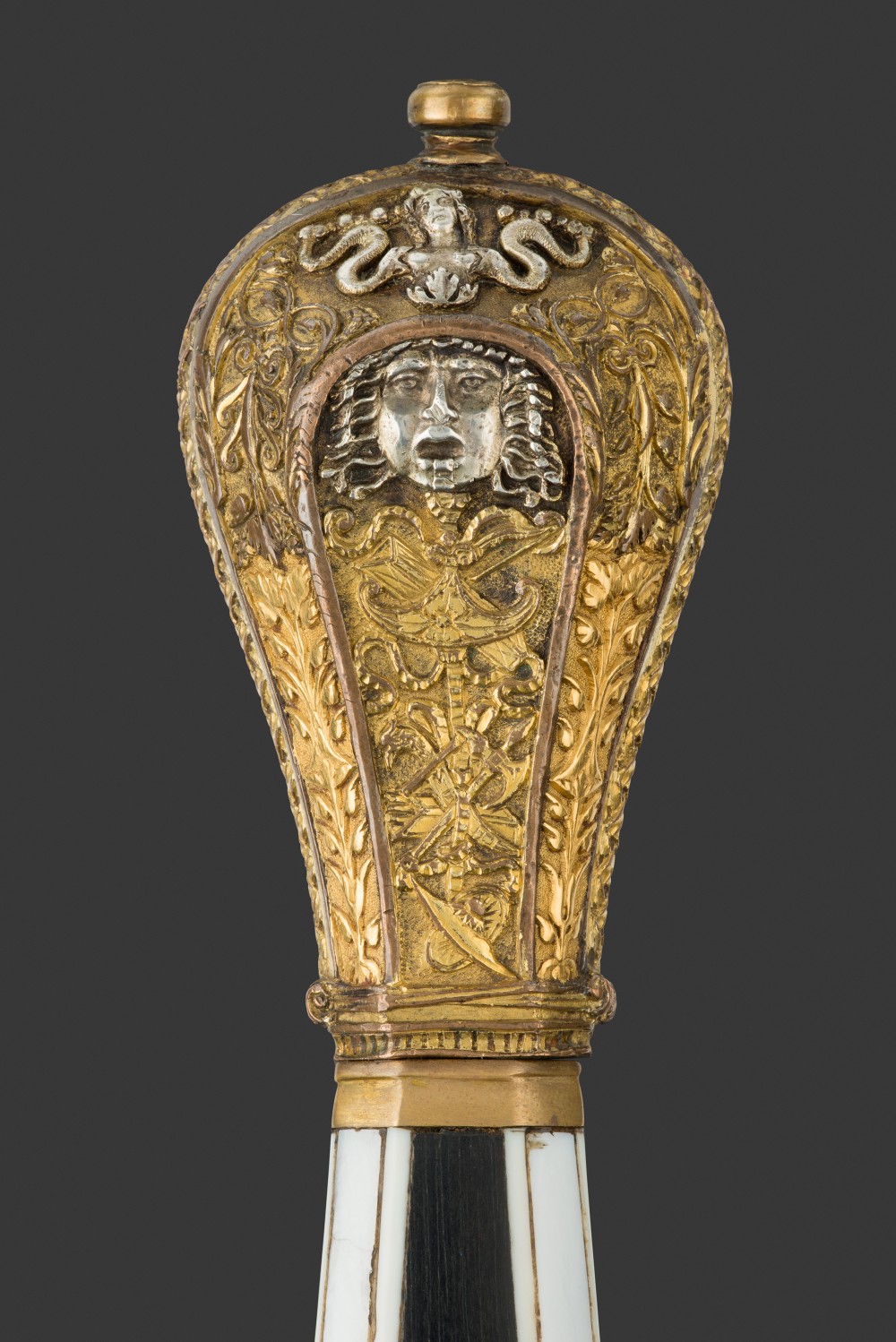 ‘As in all other fields of applied art,’ observed the late Dr John Hayward when writing of it some years ago, ‘the high point of hilt design, either as ceremonial or fighting weapon, was reached during the Italian Renaissance in the fifteenth century.’ ‘The excellence of the weapons of this period’, he went on to note, ‘is reflected in their superb proportions and exquisite decoration.’ He felt this sword ‘worthy of the greatness’ of any of the Renaissance princes.Few could deny that this sword, with is elegant lines and rich ornament arranged in counter-changed panels of contrasting gold, silver and gilt copper-alloy, satisfies this criteria of proportion and decoration.

The gilt hilt of the sword comprises a flattened pear- shaped pommel, and long horizontally re-curved flat quillons. Each part is cast and finely chased with running vine leaves, scrolling acanthus foliage, fleurs- de-lis and plaited ornament, and is inlaid at points with similarly decorated gold and silver panels and, in silver, a female bust whose breasts are bitten by serpents. Beneath is a gaping Medusa’s head from which further serpents rise. The later grip is decorated with a chequer pattern of freshwater mother-of-pearl and ebony panels. The double-edged blade, each side with a pronounced medial ridge, tapers to a point; inlaid in copper is a Lombardic M beneath a cross and the blade is etched at the forte with a pattern of imbricated scales.

The quillons of the sword, like its pommel, are divided into panels of various metals: seven on one face and five on the other. The plaques are either chiselled in relief or engraved intaglio with conventional floral ornament. Each side of the cross is chiselled with the same plaited design as the edge of the pommel, while the tongue or langet, which was intended to cover the mouth of the scabbard, is chiselled with acanthus foliage issuing from a scallop shell and fleur-de-lis at its base. The purpose of this socket was practical: to prevent water from seeping into the scabbard and so rusting the blade, should the sword be exposed to rain or humidity.

Although its superlative quality suggests that the sword was intended primarily for ceremonial use, its design nevertheless accords in all essential respects with that of a practical fighting weapon. Its long hand- and-a-half grip enable it to be wielded with either one or two hands as needed in combat, and its long, acutely pointed blade, would have been suited to both cutting and thrusting. The pronounced medial ridge that runs down each side of the blade serves to stiffen it, and would have made the sword better able to penetrate any gaps in the full plate armour favoured in Renaissance Italy.

Contemporary representations such the illuminations of Tallhofer’s Fechtbuch of 1459 (Schloss Ambras), and the painting The Coronation of the Virgin (1474, Museo Civico, Pesaro), by Giovanni Bellini, show that blades of this medially ridged pattern were fit to the hand-and-a-half sword type, and interestingly both images represent swords with hilts similar to the present example.

Surviving early Renaissance swords of a quality comparable to the present are few in number and invariably associated with persons of great wealth and rank of the period. Among the most celebrated of these is a sword in the Rüstkammer, Staatliche Kunstsammlung Dresden (no. hm.a36), identified in early inventories of the Saxon Electoral Armoury as that of Graf Leonhard von Görz (1440–1500). Though its pommel is of plummet-shaped rather than pear-shaped form, the two swords show a strong resemblance. The Rüstkammer blade is inscribed JESUS MARIA and IN ETERNVM, which has led to the idea that it was given to von Görz at the time of his marriage to the Mantuan princess, Paola Gonzaga, daughter of Luigi III Gonzaga in 1478.

A splendid sword today in the Hofjagd- und Rüstkammer, Vienna (no. a.170) made for Maximilian I, King of Rome and later Holy Roman Emperor (1459– 1519) provides another comparison. Though it has a key-shaped pommel and straight rather than re-curved quillons, it also bears a striking resemblance to the present sword. Its hilt, also of gilt copper-alloy, bears the inscription IN DIO AMOR which together with the representations of Amor and putti in the decoration of its blade has led to the suggestion that the sword was given to Maximilian at the time of his marriage to Bianca Maria, daughter of Duke Galeazzo Maria Sforza of Milan in 1493/4. This would also suggest the sword was created in Milan, then the greatest of all European arms-producing centres. Affording support for that view is the fact that a sword in the Museo Civico L. Marzoli, Brescia, again bearing similarities, was stated to be struck on its tang with the Sforza mark of a viper. Equally worth examination is the decoration of the so called ‘Martelli Mirror’ in the Victoria and Albert Museum, London (no. 8717–1867), which like the present sword involves gilt copper-alloy inlaid with silver and gold, and is thought to have been produced by the Milanese artist Caradosso Foppa (1452–1527) around 1495–1500.

Through a combination of skill and inventiveness, goldsmiths of Renaissance Italy brought to the decoration of arms a richness and vigour clearly in accord with the spirit of the age. More than in any other period, the nobleman of the Renaissance, with his passion for pageantry and display, looked to contemporary craftsmen to provide him with arms that could compete with or even exceed in splendour those of political rivals.

Hayward, in his assessment, observed that despite affinities with the sword in Dresden, the present sword excelled it in richness. Hayward believed the present sword to be the equal of Holy Roman Emperor Maximilian I’s wedding sword, and it thus remains tantalising, given the present sword’s opulence, to speculate upon the identity of its powerful original owner. The sword’s elegant ornament and harmonious proportions make it a true masterpiece of the Renaissance: bella e graziosa – beautiful and gracious.