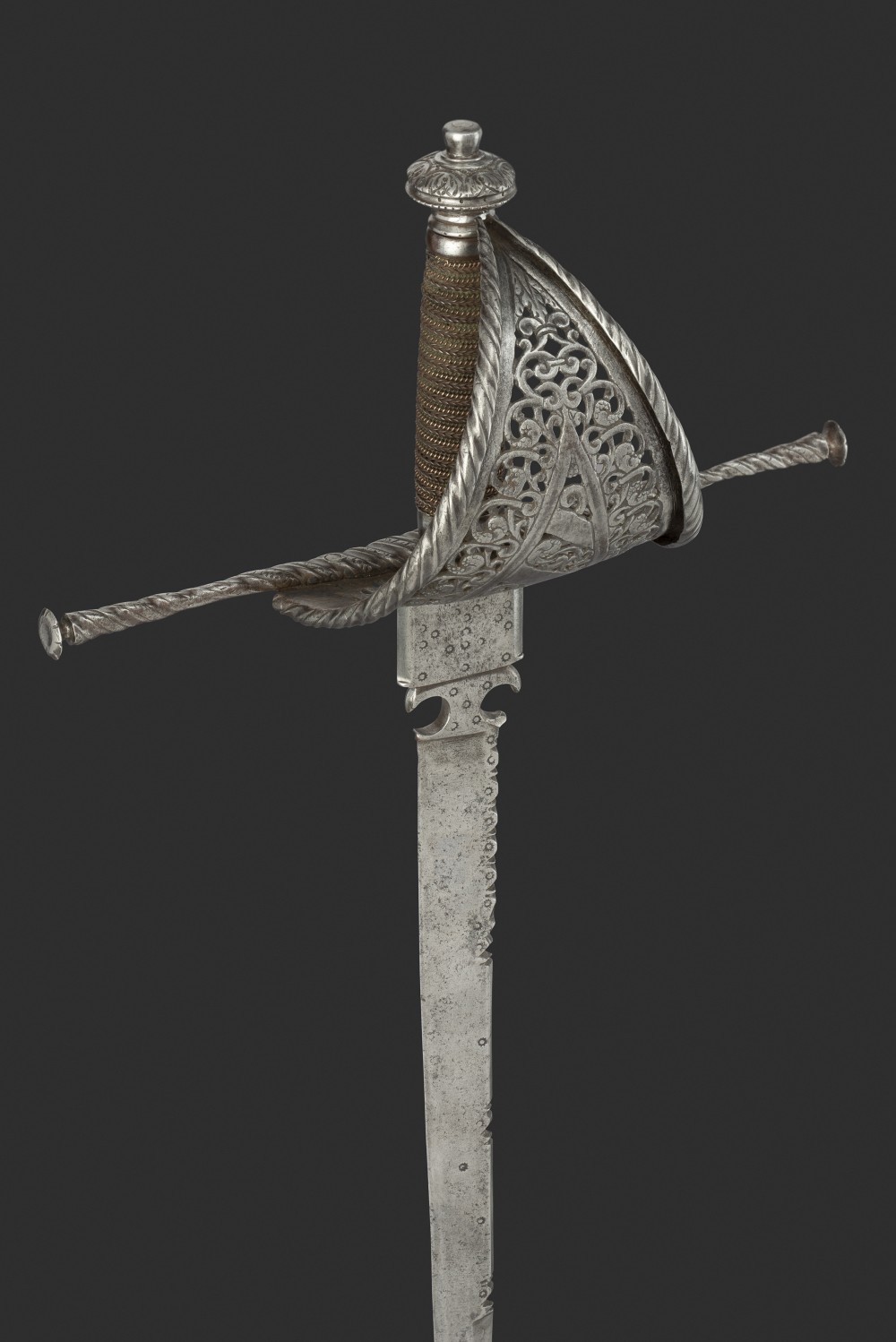 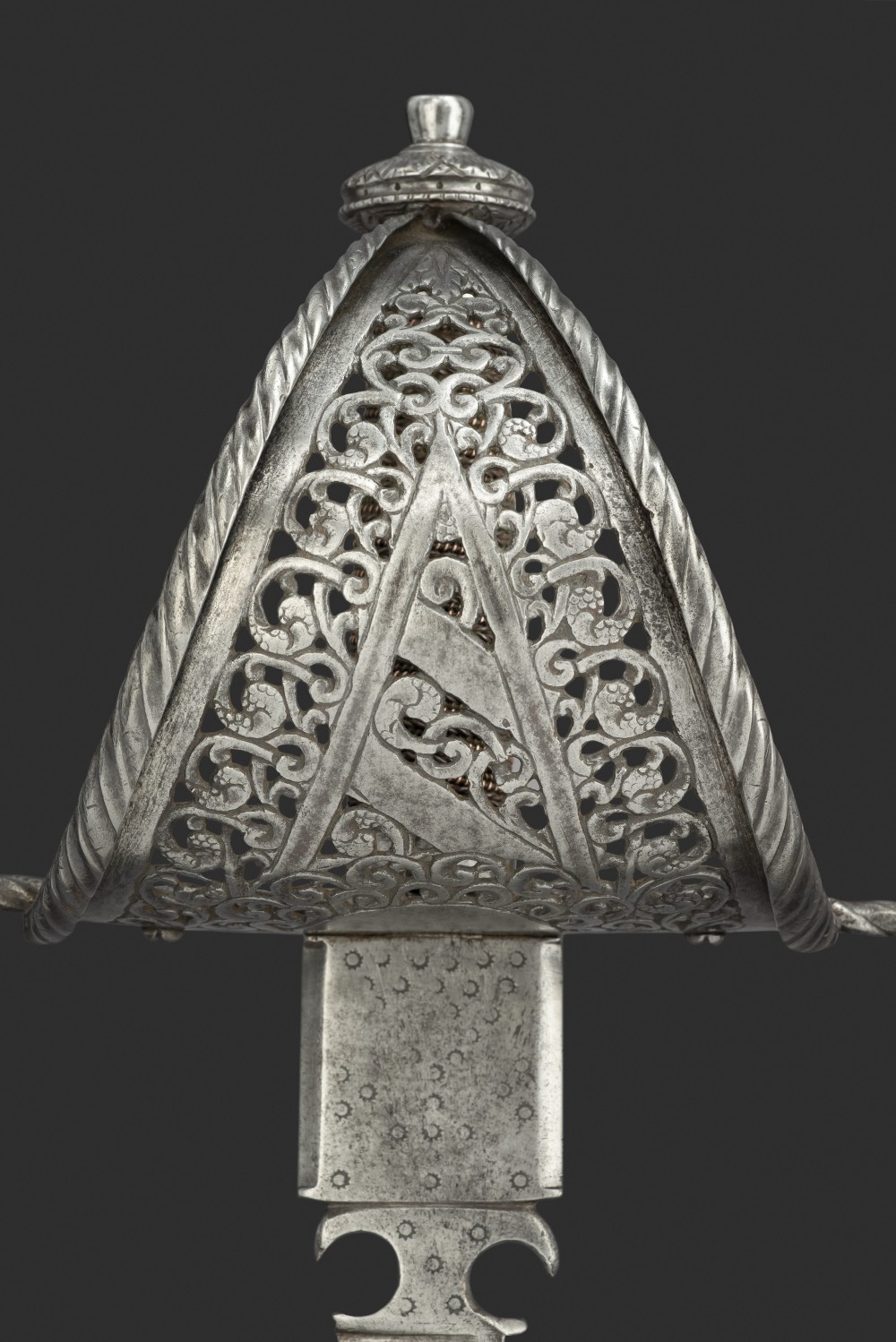 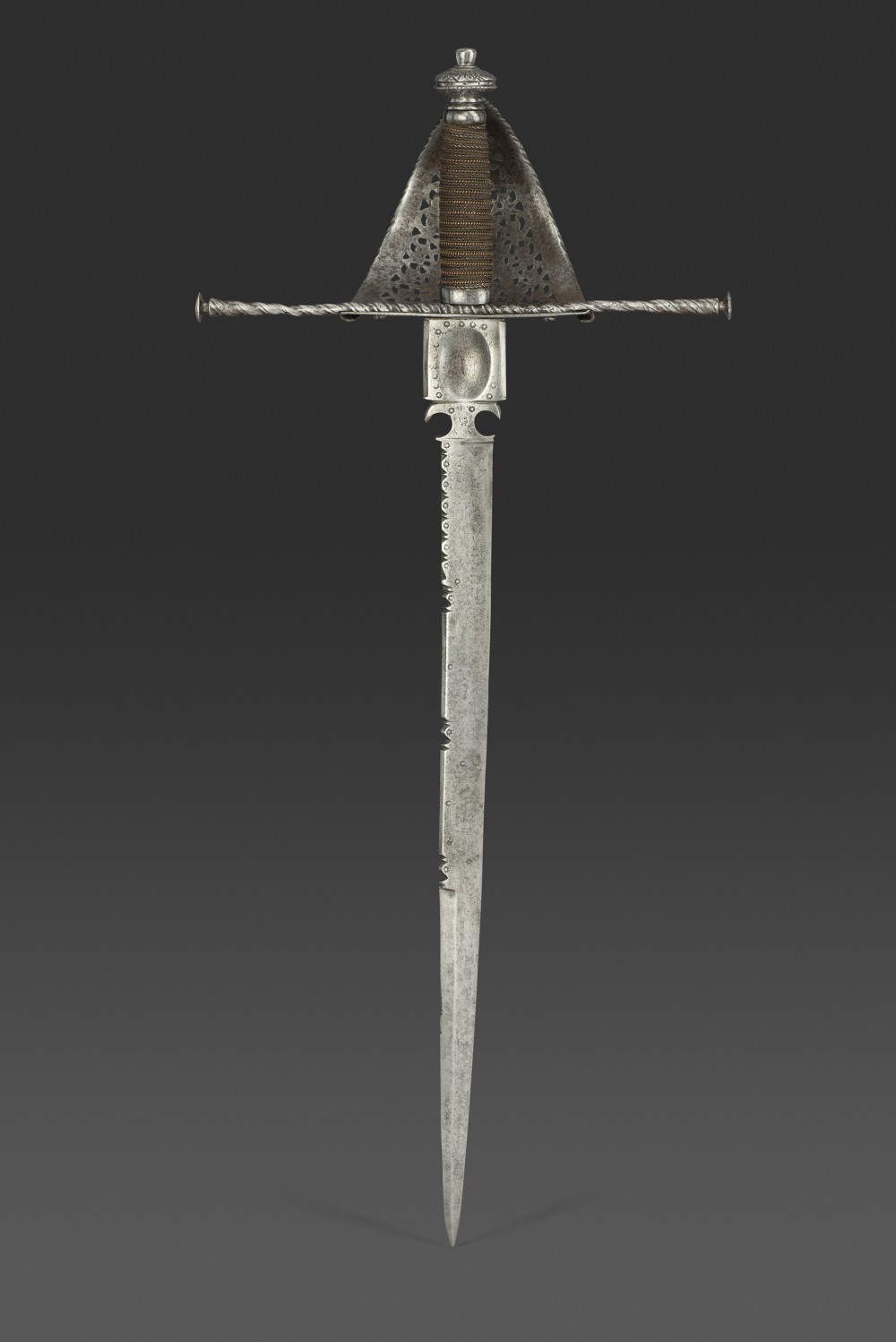 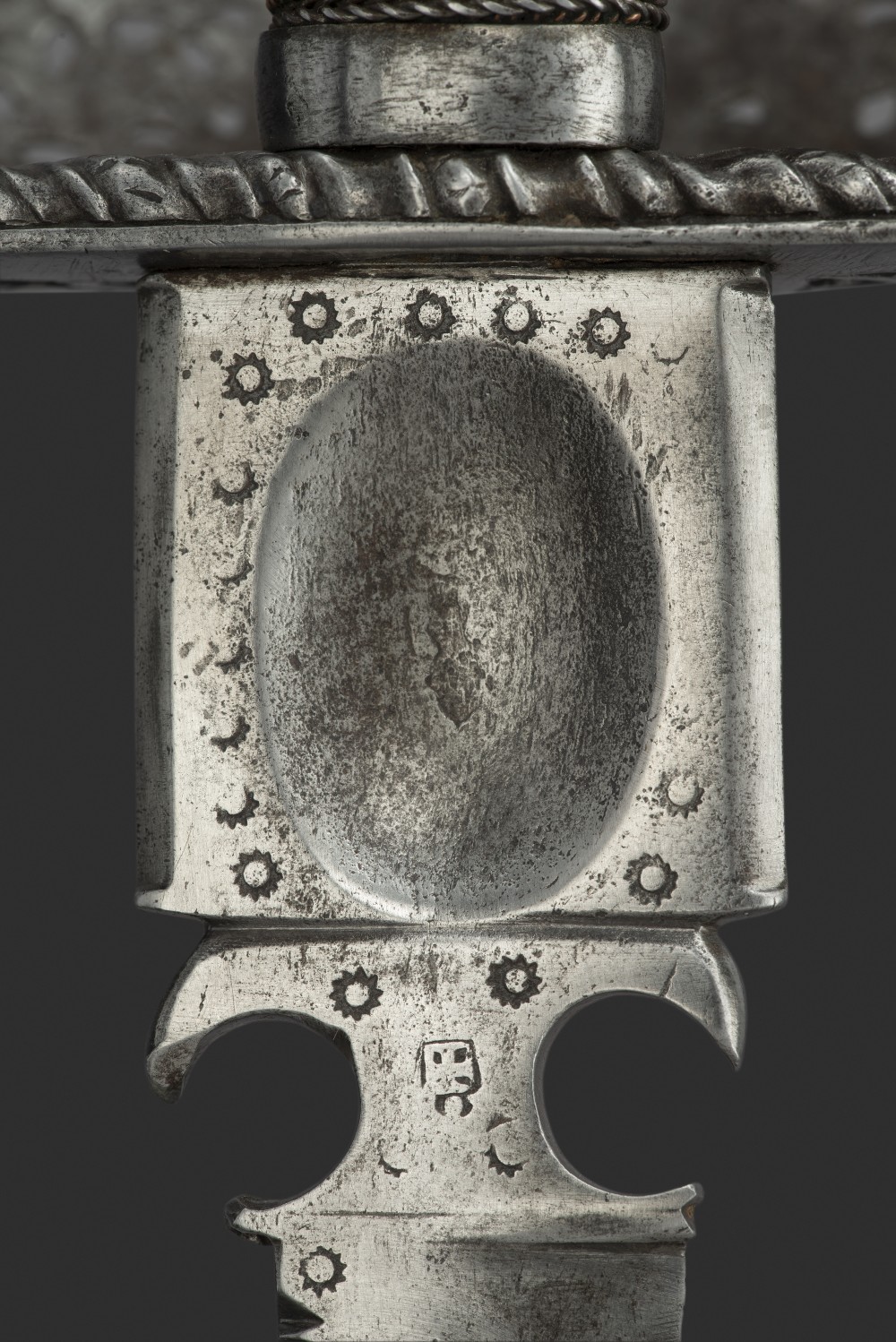 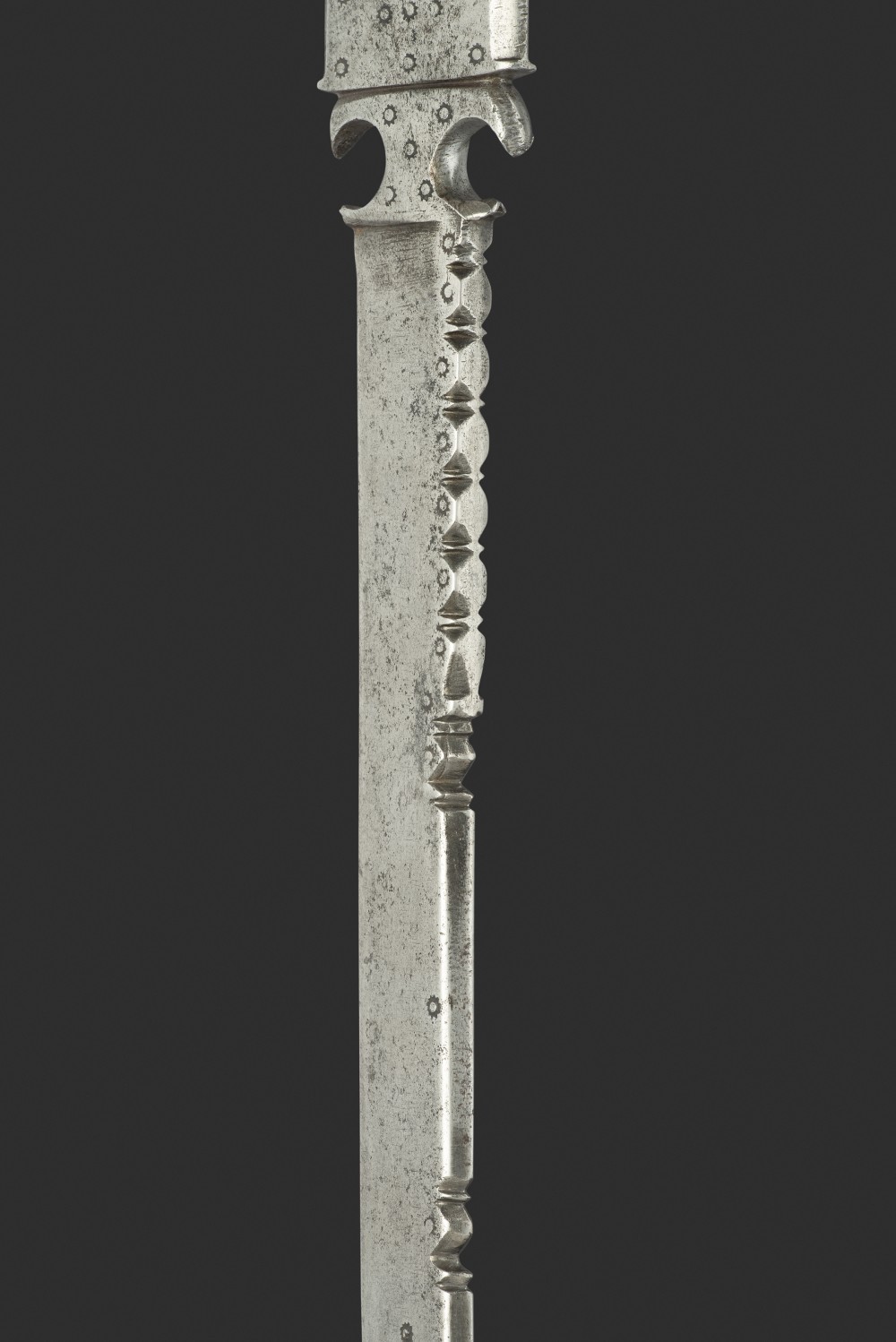 By the mid-17century Spain and its Italian cultural satellite the Kingdom of Naples had each acquired European pre-eminence in the practice of rapier combat, a discipline referred to alternately as an art or as a science in the graphic instructional ‘fight books’ published by its master tutors.

Despite the individuality in Europe of the Spanish-styled hilt constructions and the superb quality of their chiselled ornament it remains difficult today to identify, with certainty, the manufacturing origins of the unsigned majority of rapiers and matching daggers which were produced to satisfy the Spanish and Neapolitan markets. The north Italian city of Brescia, renowned for its iron-chiselling workshops is known to have produced a large proportion of these hilts for export and it is only towards the end of the century that a separated, distinctly Brescian hilt design becomes evident.

Conforming to the exact requirements of Spanish sword and dagger combat, the present dagger exemplifies a perfected design ideally suited for its dual purposes of parrying an opponents’ blade with lightning speed and as a close-quarters secondary lethal weapon.

In addition to being a broad surface amply exploited to lace-like effect by the iron chiseller, theconvex triangular guard provides excellent protection for the hand and its inwardly flangededge, the rompepuntas, could both trap or deflect a blade point. This detail is an indication both ofthe quality of the hilt and of its general manufacturing period; the early 18th century hilts tend tohave abandoned this feature.

The hilt is further defended by the pair of long quillons fitted horizontally beneath the base of the guard. These projecting bars act as an additional blade-parrying device, they are of sufficient strength against a light rapier blade and their slender proportions add no undesirable weight. also

The blade is characteristically very slender, it tapers to a long narrow point and is predominantly single-edged. The blade adheres closely to the traditional Spanish style, the lower unsharpened portion of its back-edge is decorated with an arrangement of filed notches spaced at intervals over its length. The rectangular base section of the blade, the ricasso, is decorated with a further arrangement of decorative circular punches and extends to form a pairof near-annular blade-catching rings. The inner face of the ricasso is hollowed for the thumbwithin a punched decorative enclosure and is struck with an unidentified mark between its rings.